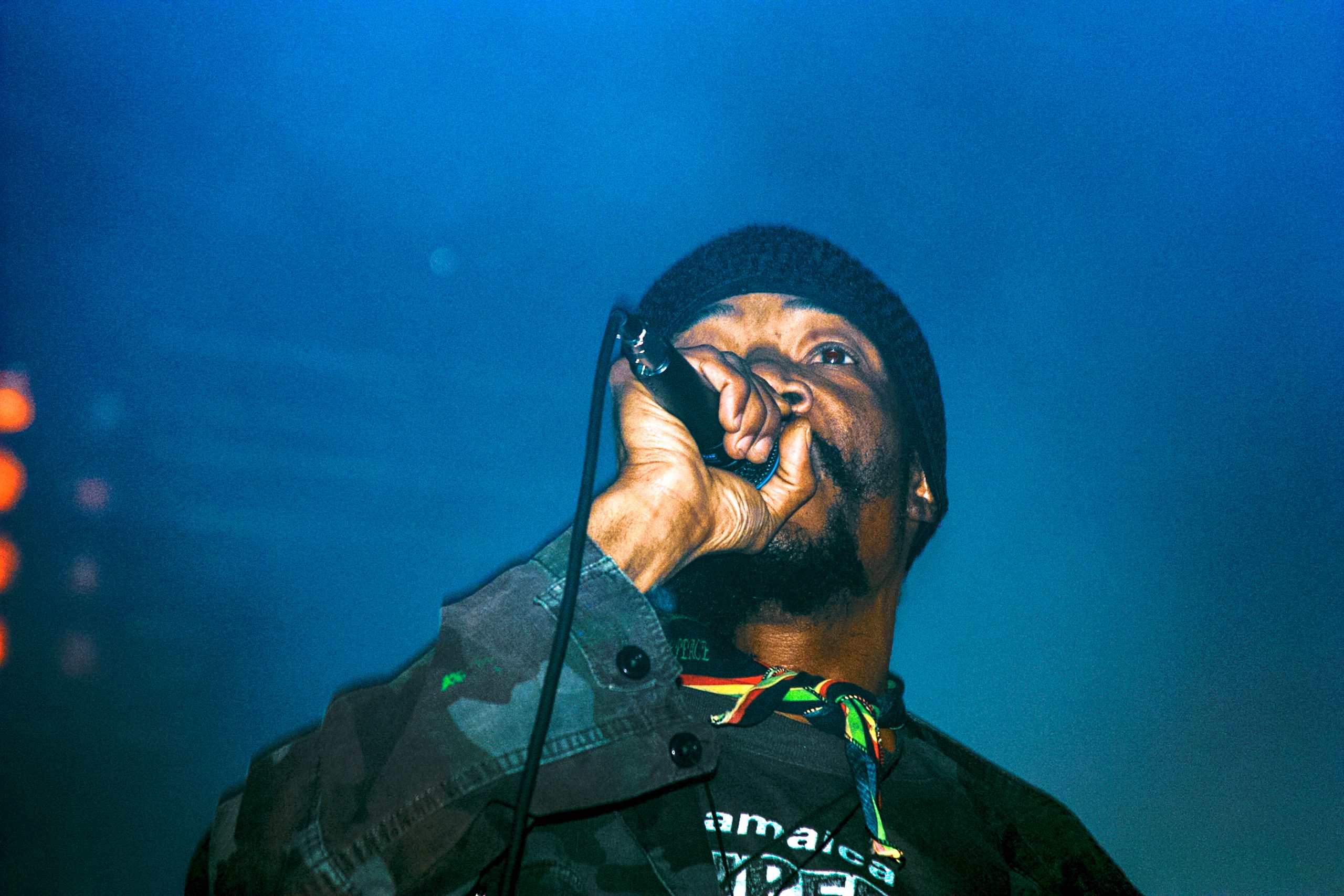 But whereas those records seemed to clean all the dirt from their reggae roots, reducing dub to a distanciated, cosmopolitan essence, “War Games” quickly transports us into a space of conflict which, even if not geographically specific, is more in tune with the work that made artists like Bob Marley and Jimmy Cliff famous.

“Who sent those soldiers to fight down here?” St. Hilaire keeps asking, drawing our attention to the absent powers that put everyday people at odds with each other.

Though the dub groove continues pulsing throughout the track, Deadbeat, aka Scott Monteith, adds enough sonic flourishes on the margins to give it a sense of uncertainty in conflict with that musical heartbeat.

The vibe seems perfectly in sync with Berlin, where both artists reside. Though hailing from radically disparate places – Montreal and the Caribbean island of Dominica, respectively – Monteith and St. Hilaire produce an alienated bass typical of the perennially unsettled German capital.

All four songs on the record, which are long enough to add up to something of album length, communicate this sense of tension.  As listeners become familiar with the record’s approach, they become increasingly wary. Whether a track settles into a steady groove or is meandering in the territory of ambient music-making, it is clear that another disruption is imminent.

This is where the “modern lash” of the record’s enigmatic title makes its presence felt. We crave the regularity of the beat, even though we know we are taking a beating.

In “War Games” that beat remains recognisably within the expanded universe of reggae; in the third track “Mind Control” it is, rather, the faster-paced rhythm popularised by such German artists as Mouse on Mars in the 1990s. Either way, though, the beat never lets us settle into a state of relaxation.

To be sure, this sense of uneasiness reflects a conscious aesthetic decision on the part of Monteith and St. Hilaire. But it also arises naturally from their respective experiences making music. They each bring something to the record that would be hard to achieve had they worked separately.

The best thing about the transition of music-making from expensive studio settings to laptops is the cooperation it makes possible. Although the Coronavirus pandemic has made it necessary for almost everyone to produce records under conditions of “social distancing”, the uncoupling that makes that possible began many years ago.

It was already common practice for traditional rock bands to assemble records out of material created in different places and at different times, long before the pandemic demanded that approach. But artists working beyond the scope of traditional instruments have been leading the way since the 1960s.

Whether forced by lack of funds to recycle existing records rather than create new ones from scratch, as dub reggae pioneer like Lee “Scratch” Perry and his counterparts in early American hip-hop did, or inspired by technological advances to combine sounds produced independently of human touch, as Kraftwerk did, these innovators systematically demystified the aura of music recorded at a particular space and time.

What they offered instead was a model of spatially and temporally asynchronous collaboration that has subsequently become the dominant mode of solidarity worldwide, in both a cultural and political sense.

That is why many musicians who have followed in their footsteps – taking advantage of increasingly sophisticated hardware, software, and networks – have made it a point to sustain their legacy of working together, even when far apart.

In the promotional literature for 4 Quarters of Love and Modern Lash, Monteith describes the process that led to the record.

“I’ve had a folder on my hard drive called ‘For Tiki’ for 14 years now, for those more often than not late-night studio moments when I stumble upon a rhythmic or musical phrase and hear that unmistakable voice bubbling up in my mind. When that folder fills up with enough of those little magic moments I know it’s time to call him, though strangely enough, he more often than not ends up calling me around those times. Such is his deep universal awareness.”

Though both Monteith and St. Hilaire have been involved in a wide variety of projects independent of each other, they still preserve a mental space – not to mention hard drive storage – in which to collect material that will eventually be brought together into something cohesive.

Nothing could be more authentic and sincere, even though this process repudiates the prejudices about music that we continue to inherit from our pre-computer, pre-tape, and pre-phonographic forebears.

If we are to make sense of the “love” referenced in the record’s enigmatic title, which we seek as a remedy for the “modern lash”, that is a great place to start. Because, at a time when physical intimacy has never presented more problems, perceiving ways to sustain meaningful connections across every manner of distance is a task of extreme urgency.

No, this record is not a product of our experience of being cut off from each other. But it is one that speaks directly to that experience.

In a world that has never felt more depressingly segmented, despite its unprecedented technological connectedness, we urgently need the inspiration of collaborations like 4 Quarters of Love and Modern Lash.

Photograph courtesy of jd (A). Published under a Creative Commons license.

The 1970s was a decade of broken dreams. The end of the postwar boom brought to a close the era of middle-class liberalism in Europe and North America. END_OF_DOCUMENT_TOKEN_TO_BE_REPLACED

Serbian director Dušan Makavejev’s 1968 film Innocence Unprotected manages both to explore the legacy of wartime trauma seriously and to make fun of itself in the process.  END_OF_DOCUMENT_TOKEN_TO_BE_REPLACED