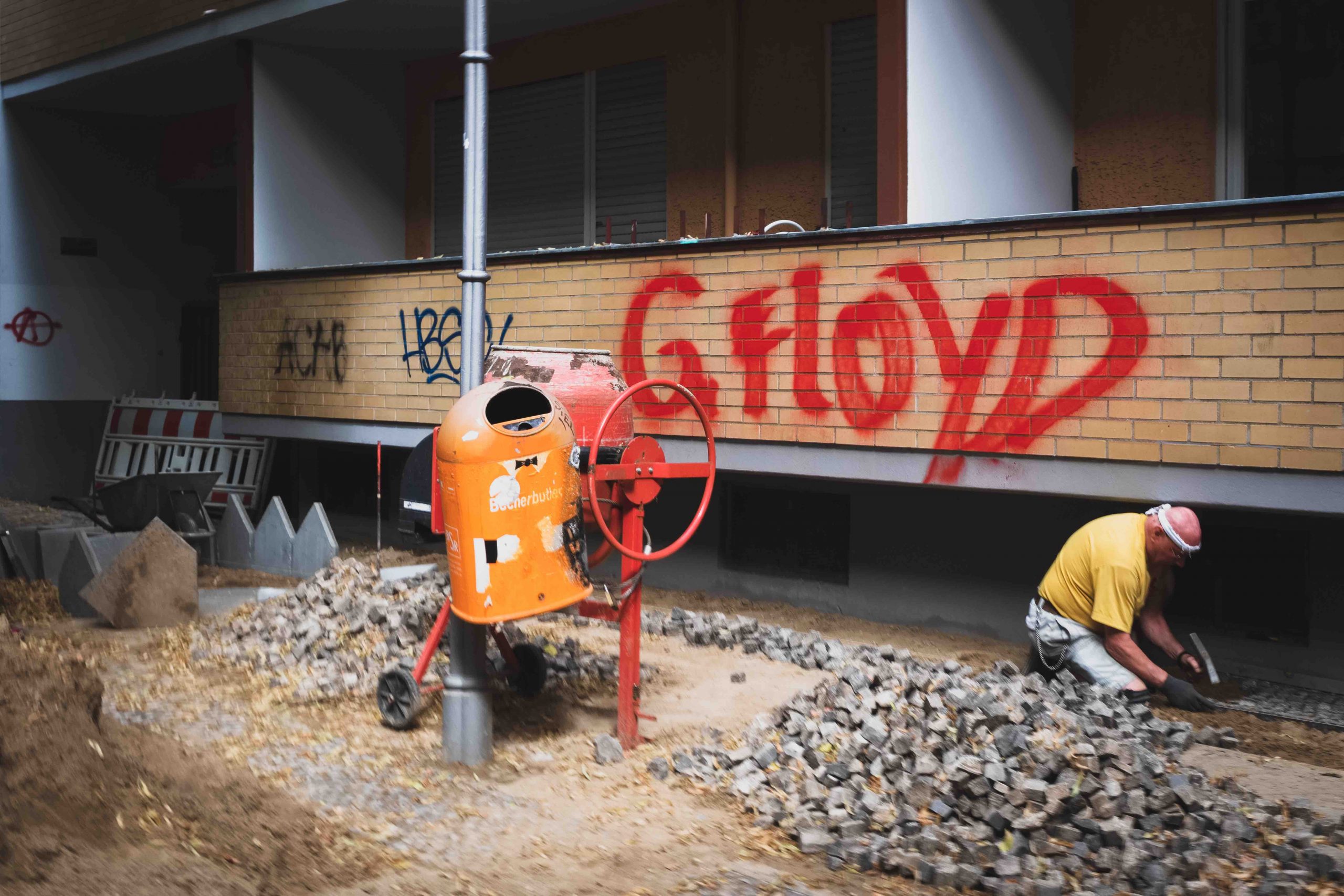 Even without knowing when it was made or why, it is not hard to tell that it provides a sustained engagement with the legacy of racial oppression in the United States.

When you read the titles for some of its tracks, it becomes immediately clear that Speaker Music mastermind DeForrest Brown Jr. is thinking about the relationship between culture and politics with a degree of sophistication rarely seen in the world of popular music.

Like DJ Spooky in the 1990s or post-punk bands like Gang of Four and Scritti Politti in the 1980s, Brown makes no apologies for presenting his work, not just as a response to theory, but as a way of making it come alive: shaking with barely suppressed rage and ready to deliver a bruising punch to the mind of anyone who doubts just how bad things were and remain for African Americans.

Take the title of the penultimate track, for example: “American Marxists have Tended to Fall into the Trap of Thinking of the Negroes as Negroes, i.e. in Race Terms, When in Fact the Negroes Have Been and are Today the Most Oppressed and Submerged Sections of the Workers. . .”

That’s quite a mouthful. And you can dance to it, though the groove that self-proclaimed “rhythmanalyst” Brown lays down is too nerve-wracking to permit relaxing into it.

Although this is not music that, despite its sustained quality, is likely to be commercially possible, the album is as self-reflexive about the different ways that it will be received as some of the best conscious hip-hop of the past two decades.

The final track, “It is the Negro Who Represents the Revolutionary Struggles for a Classless Society”, fuses horn riffs worthy of Ornette Coleman’s most radical phase with an insistent dubstep rhythm carried over from the previous track and washes of ambient noise reminiscent of Carl Craig’s most lush work.

As the title suggests, though, this palimpsest is not done for musical interest alone. Brown is bringing these different examples of critically lauded together in order to draw our attention to the representational function that each has served, both in their own time and later, as historical artefacts from which new generations draw inspiration.

Black Nationalist Sonic Weaponry wants listeners to respond to the emergency that inspired its creation by thinking, not just in and of the moment, but in a way that recognizes the famous dictum – credited to a white Southern author who borrowed heavily from African-American culture – that “the past is never dead. It’s not even past”.

This record provides us a way of putting the protests that followed the death of George Floyd in the custody of four Minneapolis police officers, into a different context than the one pre-packaged for us by the mainstream – and still mainly white – media. Not only in the United States but Europe as well.

The fact that massive protests broke out in the United States was not a huge surprise. Nor was it a surprise that artists like Brown felt it necessary to produce artistic contributions paralleling those feet in the streets.

Police brutality towards people of colour has received a lot of coverage over the past decade, with high-profile celebrities helping to bring it more attention.

President Donald Trump has made a series of inflammatory statements about race, seemingly more interested in pleasing the white supremacist portion of his base than building a broader political coalition.

And many of the men and women who flooded the streets in Minneapolis, Louisville, Atlanta, New York, Chicago, Los Angeles and many other cities had been cooped up for months because of the coronavirus pandemic. Conditions had created the political equivalent of a perfect storm.

What caught many American commentators unawares was the speed with which these protests were echoed throughout Europe. Although this international support was welcomed by leaders of the Black Lives Matter movement in the US, it also created confusion. Why did George Floyd become a symbol for people in Germany, France, and the UK instead of someone from those countries?

From a European perspective, the answer may have seemed obvious. No matter how harsh their own police can be, Europe’s police forces don’t use deadly force to anywhere near the degree that their American counterparts do.

Just as the number of gun fatalities in the United States every year astonishes the inhabitants of other “developed” countries, so does the number of police shootings, particularly those involving young black and brown men.

It makes sense for progressive Europeans to protest the brutality that takes place inside the US today just as their parents and grandparents protested the brutality that American forces unleashed in Indochina in the 1960s. The fact that this album was issued by the British Planet Mu label, and not a US imprint, is an example.

But things look more complicated on the other side of the Atlantic. Americans who have spent meaningful time in Europe know how quick people on the continent or in the British Isles can be to point out examples of the savagery that the US is responsible for while failing to register equivalent behaviour in their own countries.

African Americans, in particular, tend to be exalted, as if their suffering had made them superhuman, while Europeans of colour are “disappeared” from discussions of racism.

At least part of the popularity of jazz in Europe, long after it had ceased to be mainstream in the United States, can be attributed to this tendency. And so can the popularity of Detroit Techno, Chicago House, and the dub reggae that emerged out of the Caribbean in the shadow of American hegemony.

While political psychoanalysis has been dismissed by many post-Cold War intellectuals as a hopelessly dated way to make sense of the world, there are times when it still proves useful, providing insights that more quantitatively driven disciplines struggle to produce.

And the European protest movement inspired by George Floyd is definitely one of those times. In rapidly becoming a kind of secular icon for progressives, his face demonstrated how difficult it was for Europeans to see victims of institutionally sanctioned brutality closer to home.

To be sure, they carried images of George and spray-painted them on walls,  indicating  their sincere desire to provide support for the Black Lives Matter movement in the United States.

But many of them were also testifying to the difficulty that they have understanding the legacy of colonialism and its hyper-capitalist aftermath closer to home.

It would be good for these well-meaning individuals to spend some time listening to Black Nationalist Sonic Weaponry.

Without ever invoking the distanciation that the European perspective makes possible for black Americans to see themselves, or the blindspots that this perspective struggles to recognize, Brown seems nevertheless to have them in mind.

Perhaps not in the front, but also not in the back, as if his music were registering it in sidelong fashion.

The title of the album’s fourth track comes closest to confronting this peculiar form of reception – related to, if distinct from, the way in which the George Floyd’s face was received and repurposed: “Black Secret Technology is a Traumatically Manufactured and Exported Good Necessitated by 300 Years of Unaccounted for White Supremacist Savagery in the Founding of the United States”.

To be sure, the emphasis here falls squarely on the pain and suffering inflicted on black people in the US. But the word “exported” alerts us to a crucial triangulation, one that inverts the process that originally brought enslaved Africans to the New World on European ships.

African American music keeps travelling across the Atlantic, with complex and crucial consequences. Black Nationalist Sonic Weaponry provokes us to acknowledge and reflect upon them.

A World After Liberalism, by Matthew Rose

In the aptly titled A World After Liberalism, Matthew Rose presents a series of close readings of reactionary thinkers who helped shape today’s far-right. END_OF_DOCUMENT_TOKEN_TO_BE_REPLACED

Why would someone want to read Thomas Mann’s The Magic Mountain? And why would they finish it? END_OF_DOCUMENT_TOKEN_TO_BE_REPLACED

As I made my way up the trail, the late-afternoon sun temporarily muted by clouds, I suddenly realised how strange my situation was. END_OF_DOCUMENT_TOKEN_TO_BE_REPLACED