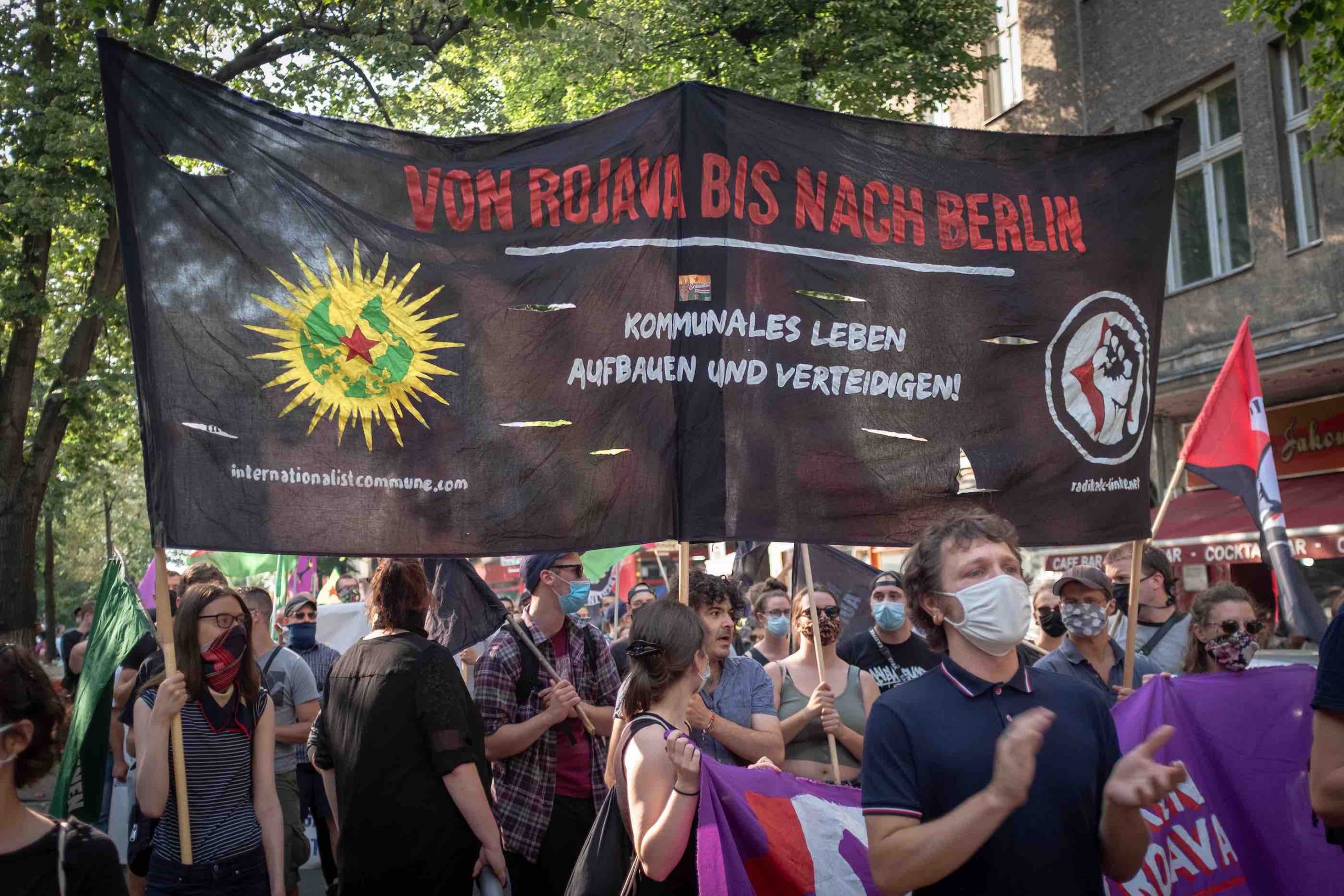 The world is getting smaller. Kurdish protest march, Sonnenallee.

The only sign of the old life – at least in Neukölln, the central Berlin borough that this journalist lives in – was a late-night march of anarchists down Karl-Marx-Straße, protesting the murder of George Floyd. Chanting slogans, smashing store windows, it was a loud reminder of the city we once lived in.

That Berlin would return, of course, was never a question. It was just a matter of when. Not if. An impoverished immigrant neighbourhood in the process of gentrification, everything about Neukölln is extreme. From the area’s racist violence to its radical leftists, it would make sense that we would be awoken this way.

The fact that it was a demonstration about something that had taken place in the United States, and not here, was proof that history was still being made. Not necessarily a history we would want, but something other than the suffocating impact of the pandemic and the restrictions it had imposed on our lives.

What’s remained missing since the lockdown was lifted has been the city’s Spring and Summer protests focused on the Middle East. In particular, the annual Nakba Day events, commemorating the dispossession of the Palestinians in the 1948 Arab-Israeli war. For the decade I’ve lived in Neukölln, I’ve always attended whatever annual commemorations took place.

In between the marches and the protestors, they provided a profound window into a conflict that Germany played a substantial role in worsening, through the Nazi genocide. The irony of observing the Nakba in Berlin never goes away. That’s a feeling I particularly appreciate, in light of all the Holocaust denial I encounter here.

Inevitably, there is always a Kurdish component to the Nakba events, which ties the crisis of the Kurds in neighbouring Syria, and in Turkey, to Israel’s conflict with the Palestinians. Kurdish socialists will often march together with Palestinian protestors, creating an equivalence in their statelessness that is often overlooked given Israel’s periodic assistance to Iraqi and Iranian Kurds.

This year, of course, there were no Nakba events in my neighbourhood. But, true to its summer scheduling, we at least got a Kurdish demonstration last Sunday, led by Syrian Kurds, who, back in the so-called old country, were and remain neighbours to Palestinians. Focused on Rojava, in northeastern Syria, it’s still relatively close to home for me. At least compared to here.

Though I don’t have the same personal ties to the Kurdish crisis, I am nonetheless sympathetic to Syrian Kurdish politics, particularly the heterodox anti-capitalism of the Democratic Union Party (PYD) and the society it’s tried to construct in its territories since the Syrian revolution began in 2011. It points to a version of the Middle East many regional leftists have longed for.

When adverts for the protest were first rubber-stamped on the sidewalks of Karl-Marx-Straße, it felt like we’d finally broken with the prohibition on politics imposed by the Coronavirus.

The photographs in this article are a testimony to that. The only pandemic one can detect is that of oppression and the perennial desire of Middle Easterners for a democratic antibody.

It was an act of contrition. In June, the King of Belgium returned a tooth to the Congo. END_OF_DOCUMENT_TOKEN_TO_BE_REPLACED

Few Italian elections since the turn of the millennium have felt more like the twentieth century than this one. END_OF_DOCUMENT_TOKEN_TO_BE_REPLACED

Not long after it opened in 2017, I paid my first visit to the House of European History.  END_OF_DOCUMENT_TOKEN_TO_BE_REPLACED