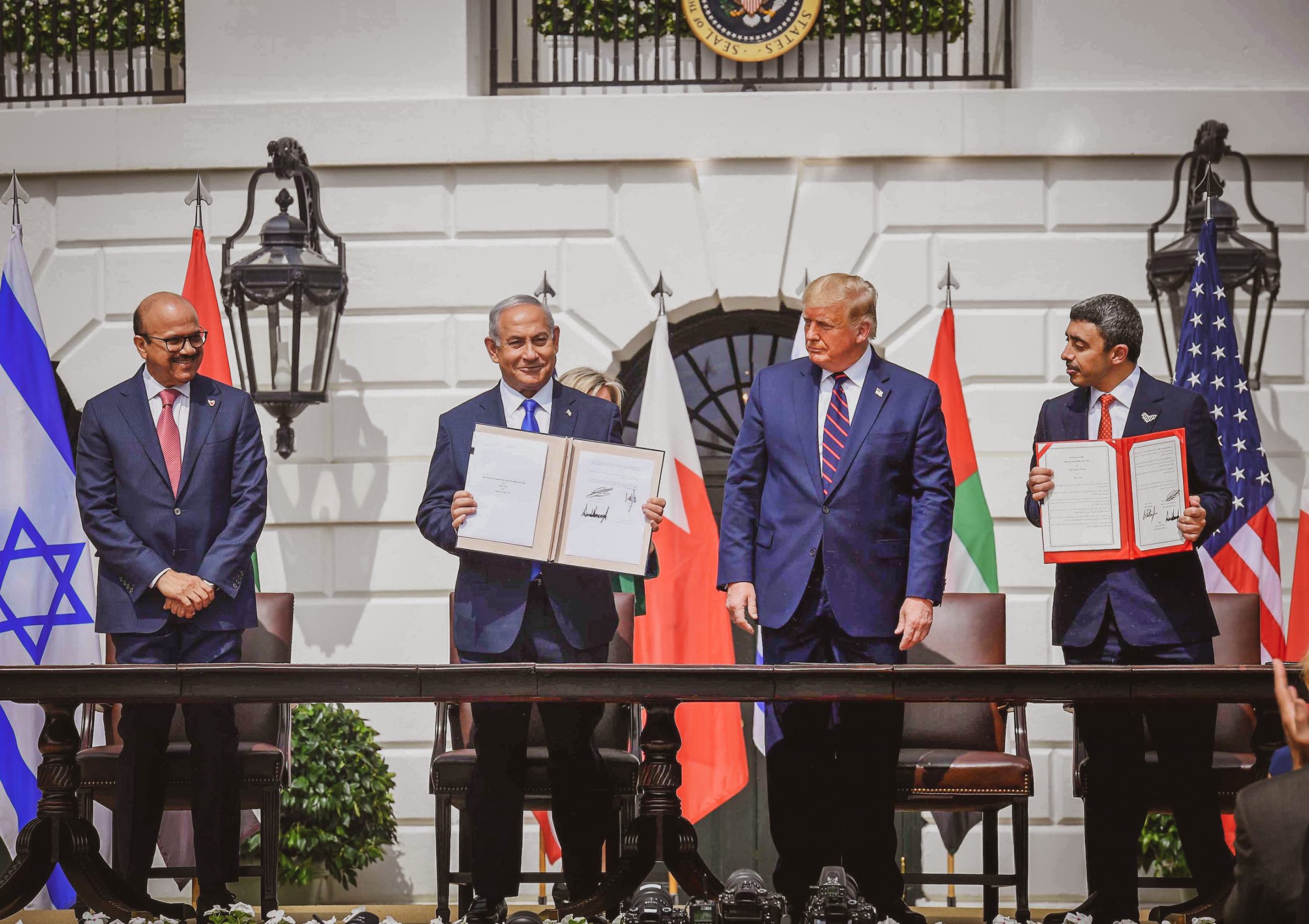 Predictably, the takeaway in the American press is that while extremists in the region hold firm, the adults in the room have struck a deal. Peace is possible, is the message. And it has its own brand: the Old Testament-themed Abraham Accords.

At the New York Times, Bret Stephens hailed the deal as a triumph of diplomacy and moderation in the region, and Thomas Friedman said it was good because each country will “want trade, tourism and investment, and also intelligence-sharing against Iran”.

Foreign Policy called it a foreign policy success for the Trump Administration. Writing in the Hill, ex-National Intelligence Director Richard Grenell said the UAE/Israel deal proved that Trump had the political acumen his critics say he lacks.

The development is, of course, newsworthy. As the BBC noted, it tightens the regional bloc against Iran and makes Israel, which already has peace treaties with Jordan and Egypt, less isolated.

It is, however, less monumental in forging peace with the so-called “Arab world” than the media say it does.

For one thing, most of the UAE’s population isn’t Arab, but made up of South Asian guest workers. Dubai and Abu Dhabi are both hubs for Western business and tourist travellers.

Bahrain is home to the US Navy’s Fifth Fleet. American forces have been based in the country since 1947. In 2017-2018, Bahrain signed $6 billion in defence contracts with the United States

These are not enemies to Israel. No state of conflict has ever existed between them. The Israeli government has maintained unofficial relations with Bahrain and the UAE for years.

That’s why the normalisation of their relations is not a peace deal as it’s being sold. Or comparable to Israel’s peace agreements with Egypt and Jordan, with whom it fought wars.

What the normalisation does do, however, is that it changes the media narrative about Middle East peace being about Israel and its neighbours rather than Israel and the Palestinians.

This is important because, from the moment Israel became independent in 1948, it sold itself as a tiny aspiring nation, struggling against an Arab world that wouldn’t accept a Jewish state.

The 1967 Six-Day War changed that narrative. Israel’s seizure of the Golan Heights, the Sinai Peninsula and the West Bank transformed it from a David into a Goliath in the global media.

Nothing did more to promote that image than the five decades of violence that ensued between Israel and its Palestinian population, in the West Bank and Gaza Strip.

After the signing of the Camp David Accords in 1979, between Israel and Egypt, peace in the Middle East became about Israel and the Palestinians in the Occupied Territories.

The 1993 Oslo Accords and Israel’s 1994 peace agreement with Jordan only served to reinforce that.

The pacts with Bahrain and the UAE resurrect the pre-1967 narrative, promoting the image of Israel as a reasonable, peace-seeking underdog, unfairly dismissed by hostile neighbours.

But the idea that Israel faces imminent annihilation is a non-starter. Lebanon, reeling from economic collapse and the Beirut port blast, was never a serious match.

Iran and its proxy Hezbollah, are the only threats. Even then, it’s only Hezbollah that can put up a truly serious fight. But that’s not the same thing as being able to “wipe Israel off the map”.

Israel’s ferocious “War Between the Wars” campaign in Syria has done much to downplay such fears, with its near-daily aerial attacks against Iranian and Hezbollah targets in the country.

Those have to be taken into account in attracting Bahrain and the UAE to the table. Not just American pressure, to secure a “peace deal” in time for the November election.

The only “existential threat” remains the ongoing crisis with the 4.6 million Palestinians living under Israeli occupation, in East Jerusalem, the West Bank and Gaza.

Though Bahrain and the UAE claim their deals with Israel will benefit the Palestinians, they won’t. The pacts are primarily aimed at Iran, with whom they are locked in conflict, in Yemen.

What’s changed is that the Gulf states have de-prioritised Palestine in their relations with Israel, further adding to Palestinian isolation under the Trump Administration’s Mideast non-policy.

As the Council on Foreign Relations said of the UAE deal:

“Israel has demonstrated little interest in negotiations with the Palestinians as it has tightened its grip on the West Bank and, along with Egypt, maintains a tight cordon around the Gaza Strip. The Trump administration has moved the U.S. embassy from Tel Aviv to Jerusalem, ended or significantly curtailed aid to Palestinians, and produced a peace plan that Palestinians regard as grossly unfair to their national aspirations and rights. At the same time, leaders in Ramallah regard the ongoing normalization of ties between Israel and the UAE as an indication that Abu Dhabi has betrayed the Palestinian cause. For their part, the Emiratis do not want to subordinate their national interests to an ineffectual and corrupt Palestinian leadership. All of this suggests that, in the short run, any expectation of new negotiations between Israel and the Palestinian Authority is misplaced.”

With the Trump Administration claiming a foreign policy victory, it actually did something far more damaging. It redirected the US media narrative from how to achieve justice for Palestinians towards a relatively minor story about pacts between governments already allied with each other.

According to such framing, the only allies the Palestinians will be able to claim are the extremist holdouts in the region: Hezbollah, Iran and Syria. Adjust your news reading accordingly.

Not many newspapers begin life like The New European.  END_OF_DOCUMENT_TOKEN_TO_BE_REPLACED

It’s remarkable how candidates in the Tory leadership race have channelled Margaret Thatcher. Especially as they’re barely old enough to have experienced her policies. END_OF_DOCUMENT_TOKEN_TO_BE_REPLACED

The Russians have struck Odesa again, this time mere hours after reaching a deal with the Ukrainians. Though spared the worst of the war, an attack on Odesa is an attack on the best of Ukrainian and Russophone culture alike. END_OF_DOCUMENT_TOKEN_TO_BE_REPLACED