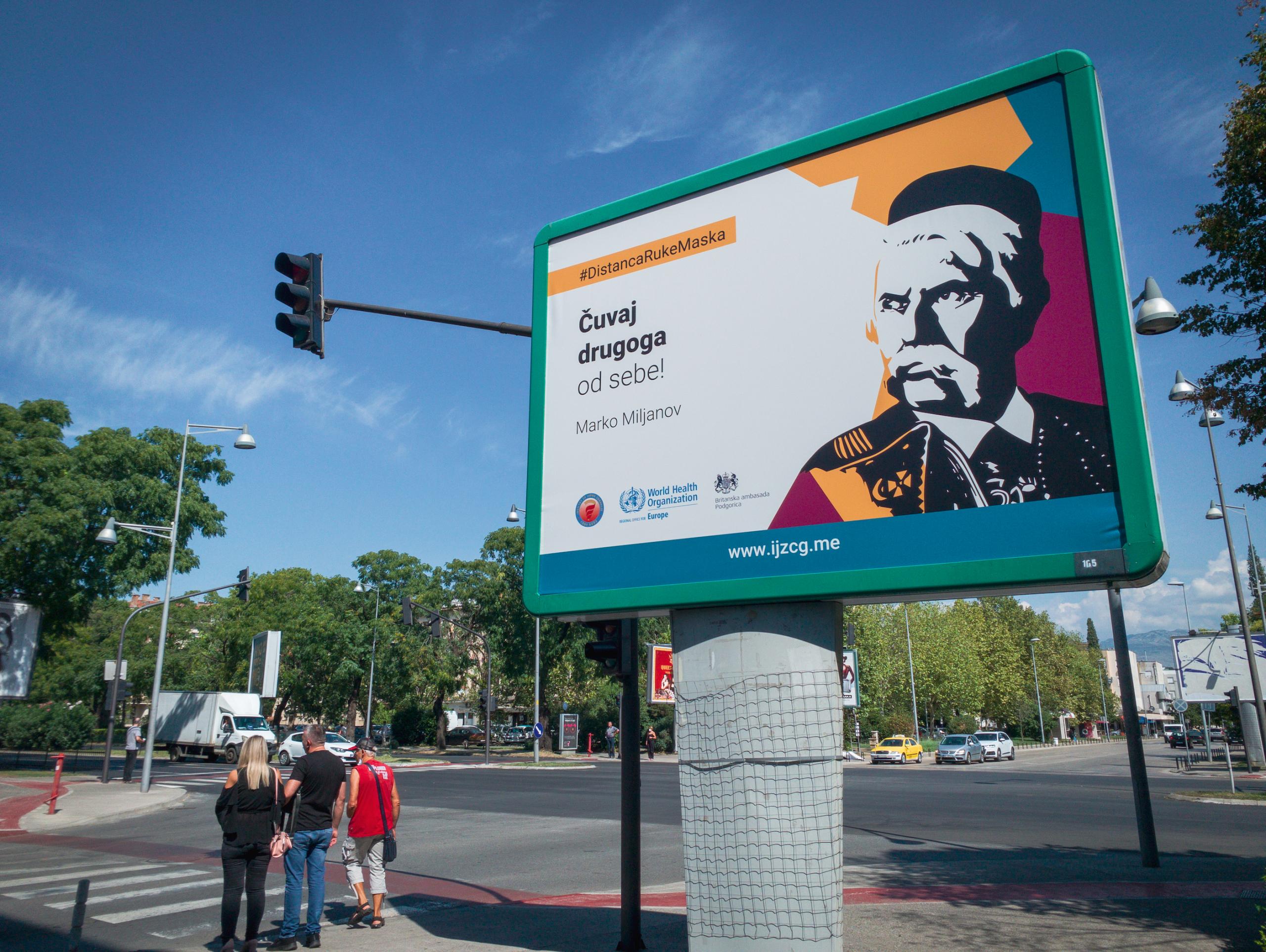 'Protect Others From Yourself'. Podgorica, Montenegro. [Natalie Sarkic-Todd]

Subsequent geographical landmarks we passed – Nuremberg, Munich, Dachau – brought thoughts of war, Antisemitism and the Holocaust to mind. By coincidence, a documentary on the trial of Gestapo commander, Klaus Barbie, the infamous “Butcher of Lyon”,  was showing on the TV at our stopover hotel in Slovenia. It completed an unusually sombre start to our trip through the Balkans.

The second day was sunny, both in mood and weather. We hit the Croatian highway, taking in the azure sea and island vistas, stopping for lunch at one of Croatia’s inland river ports, Skradin, before motoring along the Dubrovnik Riviera and finally reaching the Montenegrin border as the sun began to set.

It felt refreshing to cross the Bay of Kotor by ferry at night, with its cooling sea breeze, and reassuring to see illuminated churches high up on the hillsides. The bright lights of Budva, party town for Montenegro’s tourists, lit up the coastline of sweeping bays and new hotels and resorts. It was quieter than usual due to the pandemic. Just a short drive over the mountains and we would be home.

We pulled into a parking space right below our apartment with a sigh of relief. I found myself gazing at a graffiti art mural in the car’s headlights. The caricatured features of two black faces stared out from the shadows, one with the target sight of a gun painted on his forehead, and the other with what looked like a Nazi Swastika. There was also what looked like a black fist and droplets of blood.

I got out, peered more closely and wondered if I was misinterpreting the message. It was dark and I was tired and couldn’t be sure. But it hadn’t been there when we last visited before the Black Lives Matter protests, so it could have been a response to events since then. I took a couple of photos in the car’s headlights and resolved to investigate during daylight hours.

In fact, the timing of our visit was designed to coincide with the parliamentary elections. Montenegrin elections require voting in person, so it is common for Montenegrins abroad to converge on the country to cast their ballot. I’ve lost count of the number of times we’ve returned for elections.

Each time it has been a close run, with the party of the centre-left Democratic Party of Socialists  (DPS) ultimately emerging with a majority. I had no reason to think it would be different this time, despite recent protests by the Serbian Orthodox Church against legislation on religious rights, and nervousness about the potential for a Serb nationalist upset fuelled in part by online disinformation.

As ever, in a country at the crossroads of geopolitical powers in the Balkans, the stakes were high.

Just two years before, I had attended my first political rally – for the presidential election. It was happening across the street, of all places, and curiosity got the better of me. I wanted to see what it was like. So we showed up and occupied a couple of vacant seats in the auditorium.

What struck me, were the interventions of Albanian and Muslim party leaders praising presidential candidate Milo Djukanovic for his support for minorities and a tolerant, multi-ethnic society. They recalled the Balkan wars of the 1990s, and how Montenegro had welcomed over 100,000 ethnic minority refugees from Bosnia and Kosovo – 20% of the total Montenegrin population. A film replayed key moments from those times up until the present day. It was hard not to feel moved.

Two years on, the level of pro-Serb nationalism and the influence of the Orthodox Church was surprising.

This time, the ruling DPS failed to achieve a majority of seats, despite gaining the most votes (35%).  A complex coalition of opposition groups united against the party, pushing for change after 30 years in government. But what kind of change?

The Coalition parties of the Democratic Front (‘For the future of Montenegro’), supported by the Orthodox Church and financially by the Serbian government, received the highest number of opposition votes (32.8%).  The main leaders, prosecuted for their roles in the Russian-backed attempted coup in 2016, had made no attempt to hide their pro-Russian, Serbian nationalism, with calls for Kosovo recognition to be rescinded and even the flag and anthem of Montenegro to be replaced with Serbian-inspired symbolism.

Not to mention withdrawing from NATO, and lifting sanctions on Russia, putting into question Montenegro’s European track embodied by accession to the EU.

The second strongest opposition group, the Democrats (‘Peace is our nation’) gathered just over 12% of the vote on a ticket of anti-corruption, uniting disaffected voters and young supporters of the Serbian Orthodox Church. It has been described as a populist, catch-all party.

Critically, the third group, In Black and White, comprising the party of United Reform Action (URA), a civic movement encompassing the Greens, led by an ethnic Albanian and financed by media tycoons, tipped the balance of power in favour of the nationalists, despite being pro-Western and pro-NATO, by winning just over 5% of the vote.

And so, the balance of power (40/41 seats in Parliament) passed from the DPS era to the next.

Members of the new Montenegrin govt-in-waiting are already signaling their desire to lift Podgorica’s sanctions vs. Russia. Q is if the jr. reform wing will stop the dominant nationalist-clerical bloc from remaking MNT’s regional & international posture. https://t.co/jDdOHWNawO

President Djukanovic declared the result one of a mature democracy that must be respected with full parliamentary participation, and the leaders of the winning opposition parties appealed to their supporters to remain respectful in their celebrations and stay at home.

Inevitably, as darkness fell, and the result was declared, noisy celebrations erupted on the streets. They lasted late into the night and continued the next night into the early hours. The traditional celebration of firecrackers and flag-waving from hooting cars turned into a nationalist victory parade, with Serbian flags replacing the Montenegrin flag.

Incidents of threats and assaults on minorities were reported. Slogans such as “Go home Turks!”, smashed shopfronts, directed against Muslim minorities and most alarmingly the graffitied message “We will see Srebrenica again” sent shock waves through Montenegrin society. They were roundly condemned but reverberated far and wide.

I resolved to capture as much of the mood and times as I could through photographs of political posters, graffitied walls and public gatherings, some shared here.

My husband asked to see the photo I had taken of the racist mural below our apartment, which now seemed like a sinister warning. He posted it on his social media as well as to the European Commission with a “Not my Montenegro” caption.

He had resigned as a young Yugoslav diplomat in protest against the warmongering of Milosevic. And spent the following decades working as a Montenegrin diplomat for his country’s independence, NATO membership and now EU accession.

Emil Pilav, a Bosniak resident of Pljevlja, says he was attacked today when people who celebrated the electoral victory attacked him and his friends for no reason. A flashback to the early 90s when muslim minority in Pljevlja lived in fear because of the war in neighboring Bosnia

My kids were texting me to ask what it all meant. I tried to explain that it was normal for power to change hands after such a long period, and that whilst Serb nationalists had not gained the most votes, they had gained enough to form a majority coalition with others. Now we had to rely on the smaller parties to temper the nationalists’ worst instincts.

In fact, the leaders of the three main opposition parties publicly affirmed their commitment to remaining on the European path shortly after they won the election. Though having watched Italy’s nationalists come to power on the back of a more reformist populist party, I was not optimistic.

It wasn’t long before Montenegrins called a rally to assert their patriotism. In the heart of the old capital, Cetinje, young and old gathered in front of the Cetinje monastery – seat of the Serbian Orthodox Church in Montenegro. They put on a united display, passionately singing the national anthem, traditional folk and popular pro-Montenegrin songs, waving flags and holding flares aloft. It was a symbolic event that passed off peacefully.

A few days later, thousands of Montenegrins filled the central square in the modern-day capital Podgorica, in support of a “European, civic and democratic Montenegro” and pledging solidarity with “Albanian, Bosnian and Croatian compatriots”.

That same day, we had set off back to Brussels, reconciled to the fact that life in Montenegro was going to change in a way we could not predict. But knowing that at its heart, Montenegro is a democratic, multi-ethnic society.

It would be for others to determine the future course. Though as the cohort that had resisted nationalism during the Milosevic era of the 1990s, we had confidence that Montenegrins would once again choose multiculturalism, tolerance and peace.

As we drove back, this time taking a route through the scenic mountains and villages of Bosnia, we caught glimpses of what can happen when countries fall prey to the forces of division and turn in on themselves – shelled buildings, roadside graveyards and monuments to fallen fighters.

It’s a road that no-one should risk going down again.

Not long after it opened in 2017, I paid my first visit to the House of European History.  END_OF_DOCUMENT_TOKEN_TO_BE_REPLACED

No European city knows the Nakba like Berlin. At least in my part of town, Neukölln. END_OF_DOCUMENT_TOKEN_TO_BE_REPLACED

The View From Torino

Ukraine is everywhere. Wherever you look, from newspapers to graffiti and TV, everyone is talking about it.
END_OF_DOCUMENT_TOKEN_TO_BE_REPLACED