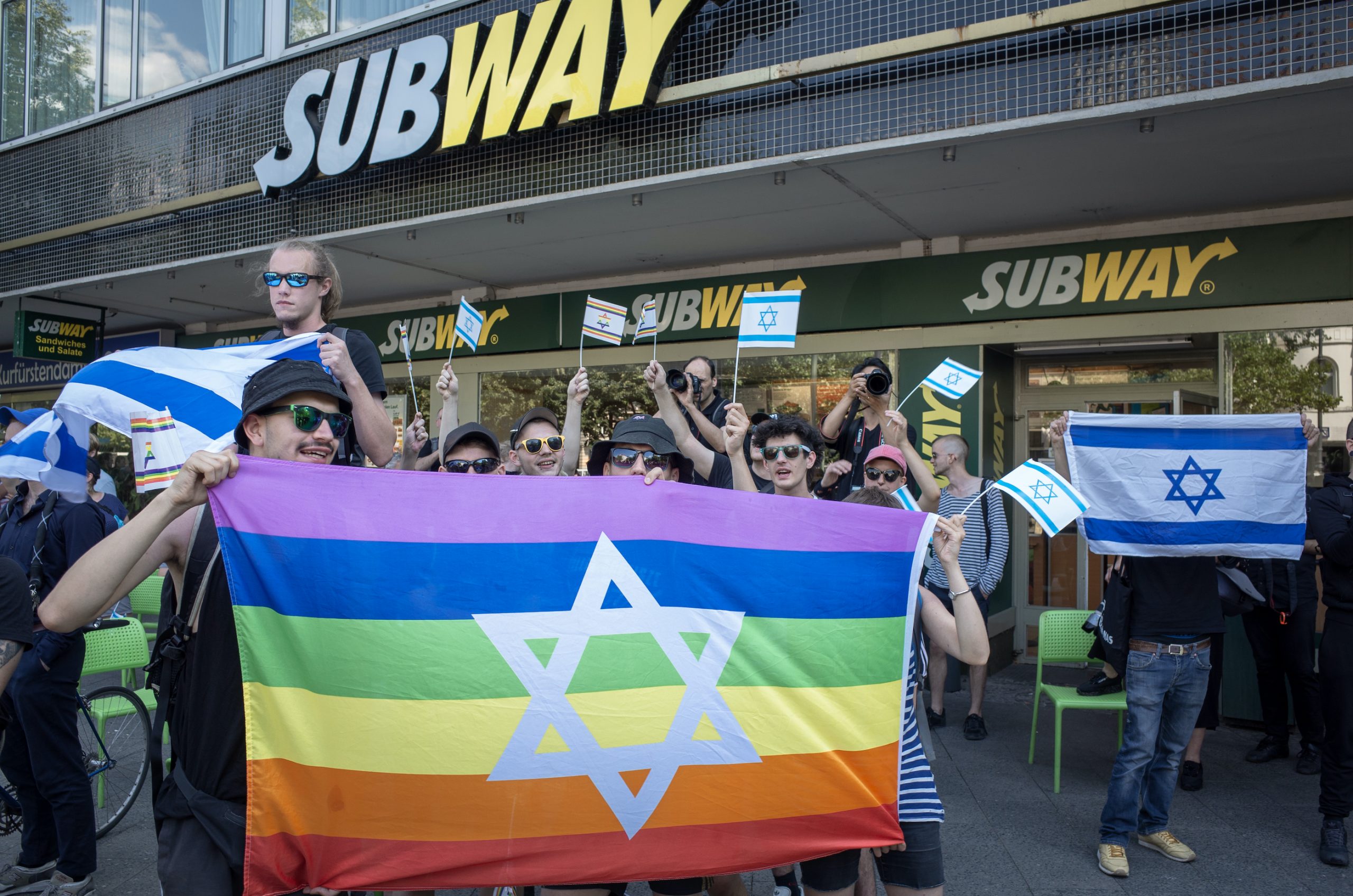 Unlike many of his counterparts, Salzborn is an academic and has published several studies of Antisemitism. On the surface, he appeared well-qualified for the position.

However, a Tweet from 2019 suggested otherwise. After a train journey, he wrote: “When you’re sitting in the train and the people next to you start talking about ‘Palestine’ for no apparent reason, it means it’s time to either get off the train, put on your headphones or scream at them.”

In case the thrust of his words wasn’t clear enough, he added the hashtag #Antisemitism.

If one takes a look at Samuel Salzborn’s academic work, it soon becomes clear that he focuses especially on Islamic and left-wing Antisemitism, often subsuming them under the term “Israel-related Antisemitism”.

It would be wrong to deny that these forms exist. But left (or even “left-liberal”, to quote Commissioner Flex Klein) Antisemitism, in particular, is a fringe phenomenon that has increasingly been invoked as a major threat in the last ten years, not least thanks to the possibilities for casual hate speech online.

The fact that violence against Jews comes almost entirely from the far-right has had surprisingly little impact on the popularity of this view.

Obviously, Salzborn characterises the Boycott, Divestment and Sanctions (BDS) movement as inherently Antisemitic. While wrong, this still falls within the realm of opinion, albeit one for which there are very clear counterarguments.

The same could be said of his assertion that “Islamophobia” is a “political attack word” that should be abandoned. Such insensitive statements undermine Salzborn’s criticism of issues like BDS. But, they’re in keeping with his tendency to polemicise.

For example, in an essay entitled Criticism of Israel or Antisemitism? Criteria for a Distinction, published in a theology journal in 2013, Samuel Salzborn claims that “From the start, the goal of Palestinian movements was the destruction of Israel.” The Oslo Accords might as well have never happened.

Salzborn similarly denies that there was any ethnic cleansing prior to Israel’s founding in 1948, instead attributing the immense demographic shift to Palestinians voluntarily selling their properties to Jews.

Perhaps he should speak to the distinguished Israeli historian Benny Morris, who not only documented the ethnic cleansing that took place during the 1948 war, but has repeatedly stated in recent years, to much chagrin, that Israel’s first premier, David Ben Gurion, would have done better to finish the job.

Or he could meet with Israeli journalist Ari Shavit, who argued in his critically acclaimed 2013 book My Promised Land: The Triumph and Tragedy of Israel that, while the expulsion of thousands of Palestinians from the town of Lydda in 1948 (with several hundred deaths) was unfortunate, it was necessary in order to establish the Jewish state.

Shavit writes of the soldiers who carried out the cleansing: “They did the filthy work that enables my people, my nation, my daughter, my sons, and me to live.” So, far from being war criminals, they were selfless heroes for taking on the burden of this grim task.

That this took place only three years after the Holocaust is part of the tragedy referred to in the book’s title. Again, an Israeli framed the birth of the country’s birth that way. Not an outsider bent on destroying the country.

It is troubling enough when an academic publishes work that can so easily be criticised. It is bemusing enough to note that journalists with similar politics disagree about something so basic as the historical record. But it’s another thing to give them responsibility for dealing with discrimination against Jews, in the German capital.

Those who share this ideology find it inexplicable when Jews, especially Israeli Jews, feel that their background makes it especially important to speak out against the oppression of the Palestinians, not least in the context of increasing global awareness of colonial structures and histories.

It was both shocking and tediously predictable, then, when an academic and artistic project set up by Israelis in Berlin, the School for Unlearning Zionism, was denounced as Antisemitic by the usual crusaders in tandem with Israeli diplomats, and subsequently had its modest funding withdrawn.

Even when Israelis give first-hand accounts of being educated with colonial attitudes, Israel’s German defenders simply cannot stomach the idea of Palestinians receiving Jewish sympathy.

Contrary to what the likes of Samuel Salzborn might think, their efforts do not advance the cause of anti-racism. In fact, they often reveal the implicit racism of those who privilege battling Antisemitism over eliminating other forms of racial discrimination.

2019 saw the most severe Antisemitic incident in Germany in recent years, when a heavily armed neo-Nazi attempted to shoot his way into a synagogue in Halle. Mercifully, he failed to breach the doors and the worshippers inside remained physically unharmed. He shot a passer-by dead, however, and subsequently went to a nearby Turkish kebab shop, firing indiscriminately and killing one guest.

As became clear from his own statements, the murderer was motivated by a hatred of all minorities, the most prominent being Jews and Muslims, though his Antisemitism was obviously foregrounded by the fact that he attacked a synagogue on Yom Kippur, the holiest day of the Jewish calendar.

While less airtime was devoted to the kebab shop attack, it was at least mentioned, and speeches by politicians usually included some reference to Islamophobia or xenophobia alongside the more important issue of Antisemitism.

What was omitted from almost all German news coverage, however, and certainly from the solemn speeches and commemorations that followed, was the assassin’s attempted murder of a Somali man after leaving the synagogue.

Adiraxmaan Aftax Ibrahim was crossing the road with a friend when the assailant’s car appeared, suddenly accelerating and swerving towards him. He ran and managed to avoid the worst, but was knocked unconscious and sustained injuries.

The driver filmed and streamed his entire rampage, and exclaimed in rage as he drove on that “all weapons had failed”.

Despite Ibrahim’s testimony and the video material, two eyewitnesses who corroborated his account were initially not even questioned by the police.

Flying in the face of the evidence, the ensuing charge against the driver was not attempted murder but criminal negligence, as if it had been merely an accident. It is scarcely credible that this had nothing to do with race.

The Halle attack was a textbook illustration of intersectional hatred: a neo-Nazi targeted the Jewish, Turkish and black communities. His rants on video and during interrogation made it very clear that his hostility applied to all those he perceived as racially different.

And yet we hear of the attack almost entirely as an Antisemitic act, with demands for increased security in Jewish spaces. We hear neither about Adiraxmaan Aftax Ibrahim’s attempted murder nor the vast majority of attacks on mosques or asylum seekers’ accommodation.

Pointing this out is an unenviable task because it can be read as downplaying Antisemitism. One is likely to be accused of insufficient solidarity with the Jewish community, especially in the light of Germany’s crimes against Jews.

There have always been German crimes against others too, whether it was the near-extermination of the Herero and Nama peoples in present-day Namibia or the assistance given to Turkey in carrying out the Armenian genocide.

Outside of Israel, white Jews find themselves in the complicated position of being subject to both Jewish vulnerability and white privilege, and the former cannot be eliminated if the latter still shapes the discourse.

One form of bigotry cannot be defeated with another. Germany cannot deal effectively with Antisemitism until it stops obstructing justice for Palestinians and neglecting racism.

Brexit will turn three on the last day of January, over six years since the 2016 referendum kickstarted Britain’s race to the bottom. END_OF_DOCUMENT_TOKEN_TO_BE_REPLACED

Be careful what you wish for. It may be a cliché, but it’s one the Greens are learning all over again. END_OF_DOCUMENT_TOKEN_TO_BE_REPLACED

Before his arrest, Andrew Tate was just another influencer with bad politics. END_OF_DOCUMENT_TOKEN_TO_BE_REPLACED