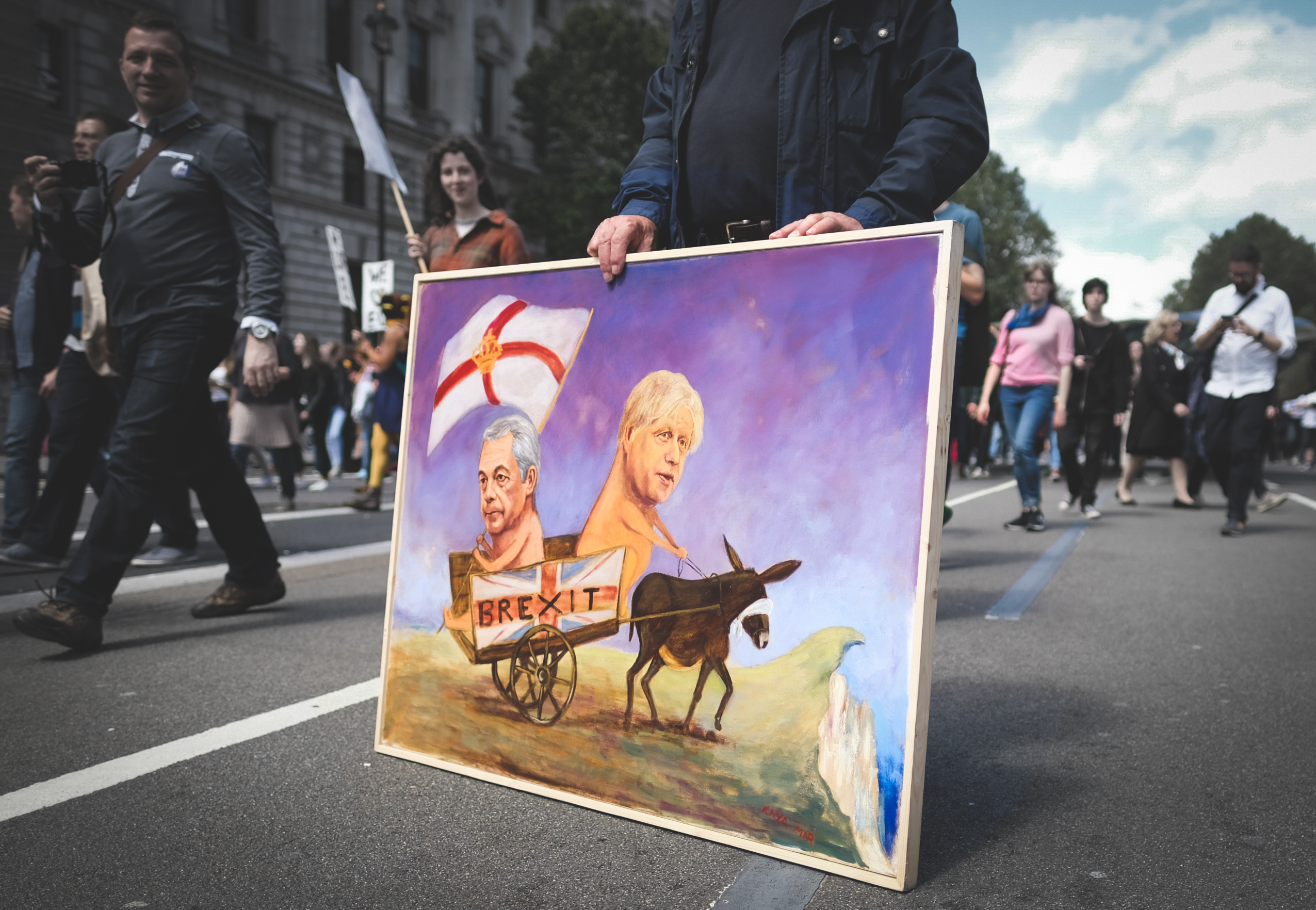 The worst nightmares of Remainers and the greatest fantasies of Leavers are closely entwined, despite the fact that the country is so polarised.

On the morning of 1 January, the English Leave voter will be able to look in the mirror and see whatever they want to see rather than face the grim reality. Mr Leave is not the working class hero that the tabloids claim he is.

Mr Leave may think he’s working-class because he operates as a sole trader, but he makes upwards of 70k a year and pays less tax than he should thanks to creative bookkeeping. He has a mortgage in a catchment area with the best schools. He drives a petrol-guzzling jeep even though he doesn’t need one.

The future doesn’t look as bright as the past. Mr Leave has high blood pressure and his doctor tells him he needs to take better care of himself. He lives in fear of developing a heart condition. He worries he won’t be there for his kids.

At the same time, everywhere Mr Leave looks he sees people he doesn’t like: the foreigners working in fields, the Asian shopkeeper, the pissheads on the street corner, the youths wearing hoodies riding bikes around the neighbourhood. These caricatures populate his everyday fantasy life.

He reads right-wing news on his phone and drinks in the week. He thinks everyone is out to get something for nothing because he is. And he would get it if it weren’t for those bloody foreigners. He’ll take 1 January as a victory, however imperfect.

More than 50% of Leave voters are middle class and live in Southern England. Yet the image of the Northern working-class Leave voter, who definitely played a role in 2016, is still the mythic prime mover of the Brexit vote.

The Remain vote was certainly made up of many middle-class urbanites. Yet the vote was really waged in a battle on the English right. The Tory establishment thought it could kill the issue in one fell swoop, but it was wrong.

Meanwhile, Mr and Mrs Remain will be left distraught on 1 January. Their best plans for holidays have been ruined. They expect the worst is soon to come.  The future doesn’t look so bright anymore.

Mr and Mrs Remain fear the queue of lorries in Kent will mean price shocks at the very least and probably food shortages. Fortunately, they’ve amassed a vast quantity of canned food items in what they’ve labelled ‘the Brexit cupboard’.

The Remain family are loyal Guardian readers and they hoped that the people’s vote could have saved the day. They blamed Jeremy Corbyn and they blamed fake news, but they still clung to the hope that someone or something would be able to stop the Brexiteers.

The kids have left for university and are now trapped in halls thanks to COVID-19 restrictions. There will be little relief in 2021 from the last brutish year of lockdowns, virtual drinks, masked up panic buying, and social distancing in parks.

This is a sorry picture of a country. We were always a divided society, yet the gulf between fantasy and reality has never been so great and the influence of the former never so strong on our politics.

The Revenge of History

The historic consequences will be less obvious. Neither Mr Leave nor Mrs Remain will be thinking of the cracks in the British Union opening up beneath their feet. The Scottish National Party will redouble its efforts to secure another independence referendum, while Sinn Fein will be pushing for a border poll.

The Conservative government will block all attempts to reopen the national question in Northern Ireland and Scotland. However, the Tories will only make the push towards independence and reunification stronger in doing so.

The Irish nationalist vote in Ulster has demographic change on its side, whereas the campaign for Scottish independence almost got there in 2014 and could well overtake the Unionist campaign the next time the vote is allowed. The clock is ticking.

But the English right has turned in on itself and no longer cares if the Scots walk and the Northern Irish follow. They wouldn’t care if Cornwall, Northumbria, Yorkshire and Wales all broke away. What exactly they call ‘the country’ is hard to pin down.

The truth is that there was never much that held us all together. The United Kingdom of Great Britain and Northern Ireland is not the name of a cohesive nation-state with a strong sense of itself and its history. Far from it, the UK was always held together by compromise and by the fact that the people had very little say in how they were ruled.

Yet it’s not what most English voters will think about. Many people will see Brexit in terms of travel, but not necessarily in the same way. The Remainers will fear it will cost more and be less convenient to visit the continent, whereas Leavers don’t believe it will be because EU countries need our tourism.

We will have lost our travel rights since the EU will rule us out over COVID-19. Most holidaymakers won’t notice this until much later. The people who will be hit first are the types who go skiing every year.

Sadly so much middle-class support for Remain in the UK was about holidays and not so much about the implications for migrant workers and refugees. Meanwhile, the pro-Leave middle classes simply assumed that the British will always be the first in line – it’s our birthright after all.

The British are never foreign, no matter where we go! This is the exact feeling Mr Leave has when he sits down in an English pub in Southern Spain. He’ll have steak and chips with his pint of lager.

Once upon a time, the Costa del Sol was the safe haven for British gangsters looking to make a getaway to paradise. The lack of an extradition treaty between Spain and the UK created a perfect opportunity.

The stories of old getaways will become legends. People will eventually regain their holiday rights, but not as soon as they’d like. They will have to queue up in the airport with Africans, East Asians and Latin Americans. Maybe this irony is one the Leavers deserve.

Scottish Remainers have an easy scapegoat for what has gone wrong. Forget Britain. England is a society wracked with division in its own right. One side has won and the other side will be in mourning for years to come.

Brexit will turn three on the last day of January, over six years since the 2016 referendum kickstarted Britain’s race to the bottom. END_OF_DOCUMENT_TOKEN_TO_BE_REPLACED

Be careful what you wish for. It may be a cliché, but it’s one the Greens are learning all over again. END_OF_DOCUMENT_TOKEN_TO_BE_REPLACED

Before his arrest, Andrew Tate was just another influencer with bad politics. END_OF_DOCUMENT_TOKEN_TO_BE_REPLACED