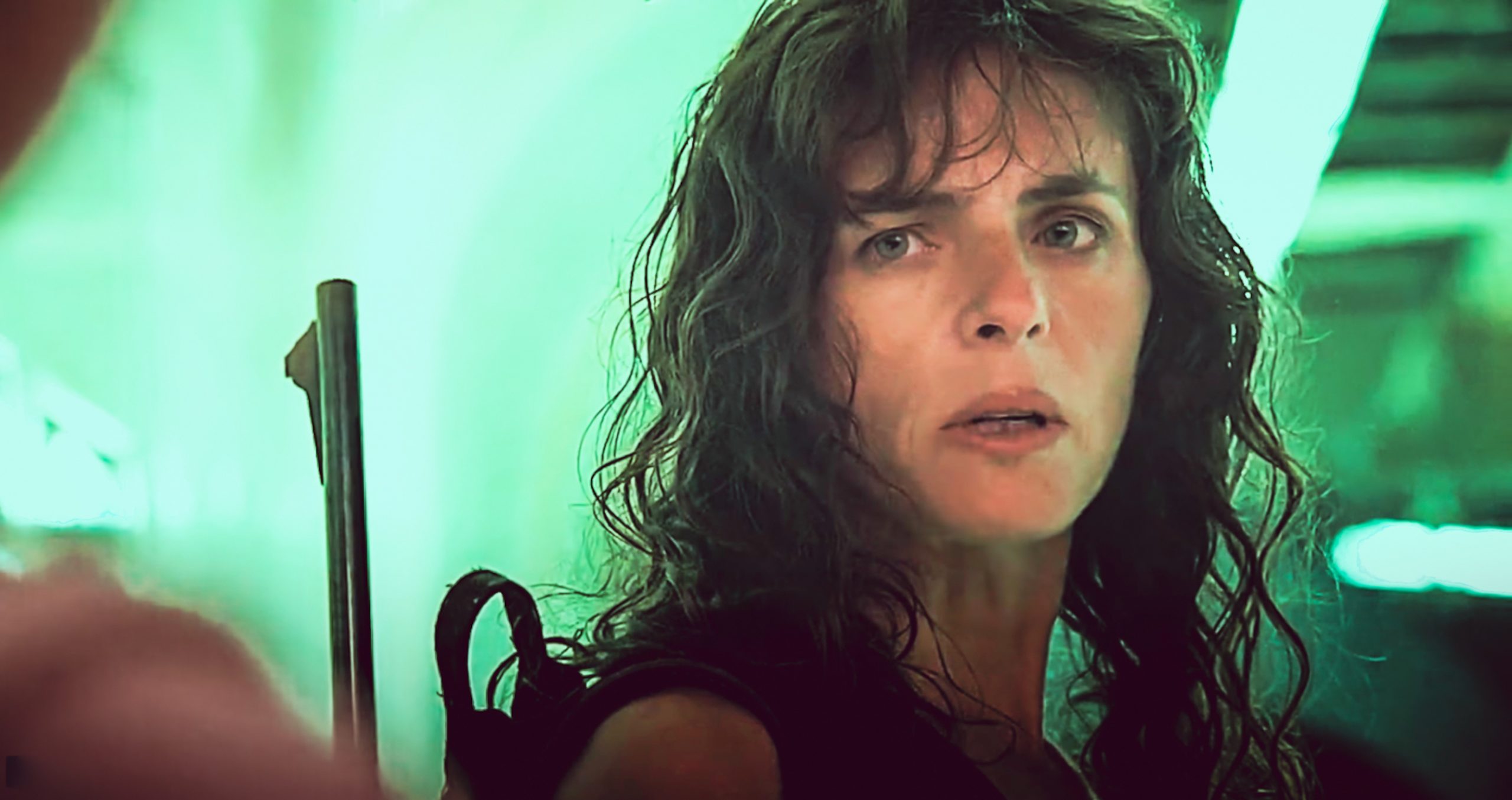 A native of the former Yugoslavia, Furlan’s death inspired a soul-searching debate across the region, about parts of her life story largely foreign to her international fans, who know the actor best for her cult sci-fi roles.

She turned Delenn into an SF character quite unlike any other. Imbued with a genuine quality of wisdom and compassion that clearly reflected the performer.

An truly unique person who left an ineffaceable mark on Science Fiction. pic.twitter.com/yvGa3exLdg

On her website, Mira Furlan described herself as a “noted former Yugoslavian actress, currently best known to the western world for her portrayal of the Minbari Ambassador ‘Delenn’ on the award-winning series Babylon 5″.

Furlan’s Wikipedia entry she was a Croatian actor of mixed Croatian, Jewish and Slovenian heritage, born in Zagreb. For much of her life, these two labels—Yugoslavian and Croatian—were not mutually exclusive. One could have been both.

Born in 1955, by the early 1980s Mira Furlan had become one of the leading movie and TV stars in the Socialist Federal Republic of Yugoslavia, with roles in Emir Kusturica’s Academy Award-nominated When Father Was Away on Business (filmed in Bosnia in 1985), and the popular anti-patriarchal The Beauty of Vice (shot in Montenegro in 1986), as well as several evergreen TV dramas such as Velo Misto and Smogovci.

A trailer for The Beauty of Vice, re-released in homage to Furlan several days after her death, gives a glimpse of how most people who had the privilege of following her career at the time remember her as bursting with natural beauty and acting talent.

Both through her acting roles and as a public figure, Mira Furlan often challenged the establishment and served as an early voice for second-wave feminism.

But as the union called Yugoslavia started to unravel, and nationalists took power in successor states, starting a series of wars, Furlan was declared a traitor by the media in her native Croatia.

The main ‘charges’ of the ensuing smear campaign against Furlan were that besides working at the Croatian National Theatre in Zagreb, she also starred in a theatre production in Belgrade and that the love of her life, and live-in partner since 1986 and later husband, film director Goran Gajić, was an ethnic Serb, also born in Zagreb.

Since the 1990s, smear campaigns in the Balkans have not been a mere exchange of opinions. Locally referred to as “media lynchings”, they can be precursors to actual lynchings, perpetrated by aggravated “concerned patriotic citizens” poisoned by hate-fueled propaganda, and armed with actual weapons.

In Furlan’s case, the campaign started with character assassination, in a news magazine article entitled The Hard Life of an Easy Woman, by journalist Rene Bakalović. “Easy woman” is a local euphemism for a promiscuous woman lacking morals, or a prostitute. Among various libellous claims, Bakalović’s text insinuated that Mira Furlan hated Zagreb because of her Jewish roots.

This fell in line with the growing Antisemitism promoted by resurgent nationalists, who considered local Nazi collaborators from the Second World War true patriots.

The smear campaign against Mira Furlan quickly escalated. She was fired from her job at the Croatian National Theatre and the Croatian state requisitioned her family’s Zagreb apartment. The enormous number of death threats left on her answering machine was the final reason for her decision to leave a country that offered her no protection.

On a November 1991 evening, Furlan and Gajić’s remaining friends threw a farewell party for the couple in a Belgrade flat. They left the following morning for New York. A Nova S article commemorating the event also quoted Furlan, who explained how it felt to be ostracised on both sides of the front lines. When asked who from her celebrity acquaintances disappointed her at that time, she said:

“The list would be too long. Very few people stood by me at that time … A few?! What am I saying? There were no reactions. Full stop. The only serious article about the case was written by the brave and unique Viktor Ivančić. For that, I was and still am eternally grateful to him.  There was no public support, neither in Zagreb nor in Belgrade, where I became one of “the others” overnight, someone whose “case” was of no consequence. But in Belgrade, there were some people who before going to America generously shared their American contacts who could help us abroad. Among them was the greatest of them all, both as an actor and as a human being: Milena Dravić. In such moments of crisis you realize who is truly a good person.”

In the United States, the actor proceeded with her career, including notable roles in the hit TV series Babylon 5 and LOST.

The sudden announcement of the passing of Mira Furlan is so sad. She was so captivating as Danielle Rousseau. A force of nature in every scene. You knew whenever her name appeared in the opening credits it was going to be a good episode. Rest in peace ❤ pic.twitter.com/LQW2WfHLzv

According to the testimony of her friend and colleague Rade Šerbedžija, who also worked in Hollywood at the time, Furlan returned to Croatia in 2002 and played a leading role in Euripides’ Medea, produced by Šerbeđija’s private theatre company Ulysses, to critical acclaim and a warm reception.

“Mira was a great and just woman. She was a leftist and a socialist. She was a brilliant actress and person. Everybody loved her, the audience, the other actors and directors. She proved it when she left, when she escaped the terrible war and managed to build a new career in the USA.”

Even though a commemorative video by the Public Broadcasting Service HRT (Croatian Radio and Television), showing highlights from her movies and TV shows, noted that her last theatre performance was in Rijeka, Croatia, a year before her death, the video also quotes Šerbedžija saying that “she never really returned”.

Moreover, after the news of Furlan’s death spread, the Croatian National Theatre published an official obituary on its website, which glossed over the injustice done to the banished actor:

“Her 1991 departure to the USA due to political reasons was the moment of stoppage of her work at the Croatian National Theatre, but her artistic legacy lives on. She was adored and will be adored by generations of audiences, because alongside her enormous talent and intelligence she was an artist who showed moral greatness because of her uncompromising positions.
Farewell and thank you, Mira.”

This announcement led to a flurry of comments on social media blaming the theatre for shameful lies and hypocrisy and attempting a “forgery of history”.

Ivica Buljan, the current manager of the drama department of the Croatian National Theatre, published a personal apology to Furlan in a lengthy Facebook post, which was relayed by influential online media. Besides noting that it’s too late to “apologise to the dead” and paying homage to his former colleague, Buljan wrote:

The media’s treatment of her death in Croatia also raised accusations of hypocrisy. In one case, an HRT TV show about Furlan even included a statement from one of her initial “media executioners” in which he praised her 2002 performance in Zagreb.

“How sickening, pathological and downright scary. Rene Bakalović, the author of the text entitled “The Hard Life of an Easy Woman” which he used to butcher Mira Furlan at the beginning of the 1990s in Globus magazine, has now been invited to talk in a news segment about her death on the HRT (PBS Croatian Radio Television) as “her schoolmate”.

Very little of these conversations has been aired outside of the former Yugoslavia. Remembrances of Furlan by foreign fans and colleagues in the US have been focused on her accomplishments on the international stage. Mira Furlan’s “prehistory” of regional stardom is only briefly mentioned. Her struggle against nationalism has largely been absent from them, including in obituaries in foreign media.

This absence of awareness in the West might reflect Furlan’s PR attitude, which was based on her complex personality, which was both strong and fragile. When talking to American media, it appeared as though she refused to play the part of complaining victim and of a show-off regarding her fame and celebrity in Croatia, unless specifically asked.

As a survivor, Mira Furlan focused on her new life and career and returning to public life in the Balkans after she had “made it” abroad, by participating in visiting projects and as a columnist for Feral Tribune and Nova S.

The Twitter profile of American writer J. Michael Straczynski, the creator of Babylon 5, became one of the focal points for international fans over the loss Furlan. Straczynski shared a video with a parting scene from the series in which he character, Satai Delenn, explains why in her alien culture there’s no word for goodbye.

This article originally appeared in GlobalVoices and is reprinted with permission. Screenshot courtesy of Lost. All rights reserved.

Brexit will turn three on the last day of January, over six years since the 2016 referendum kickstarted Britain’s race to the bottom. END_OF_DOCUMENT_TOKEN_TO_BE_REPLACED

Be careful what you wish for. It may be a cliché, but it’s one the Greens are learning all over again. END_OF_DOCUMENT_TOKEN_TO_BE_REPLACED

Before his arrest, Andrew Tate was just another influencer with bad politics. END_OF_DOCUMENT_TOKEN_TO_BE_REPLACED