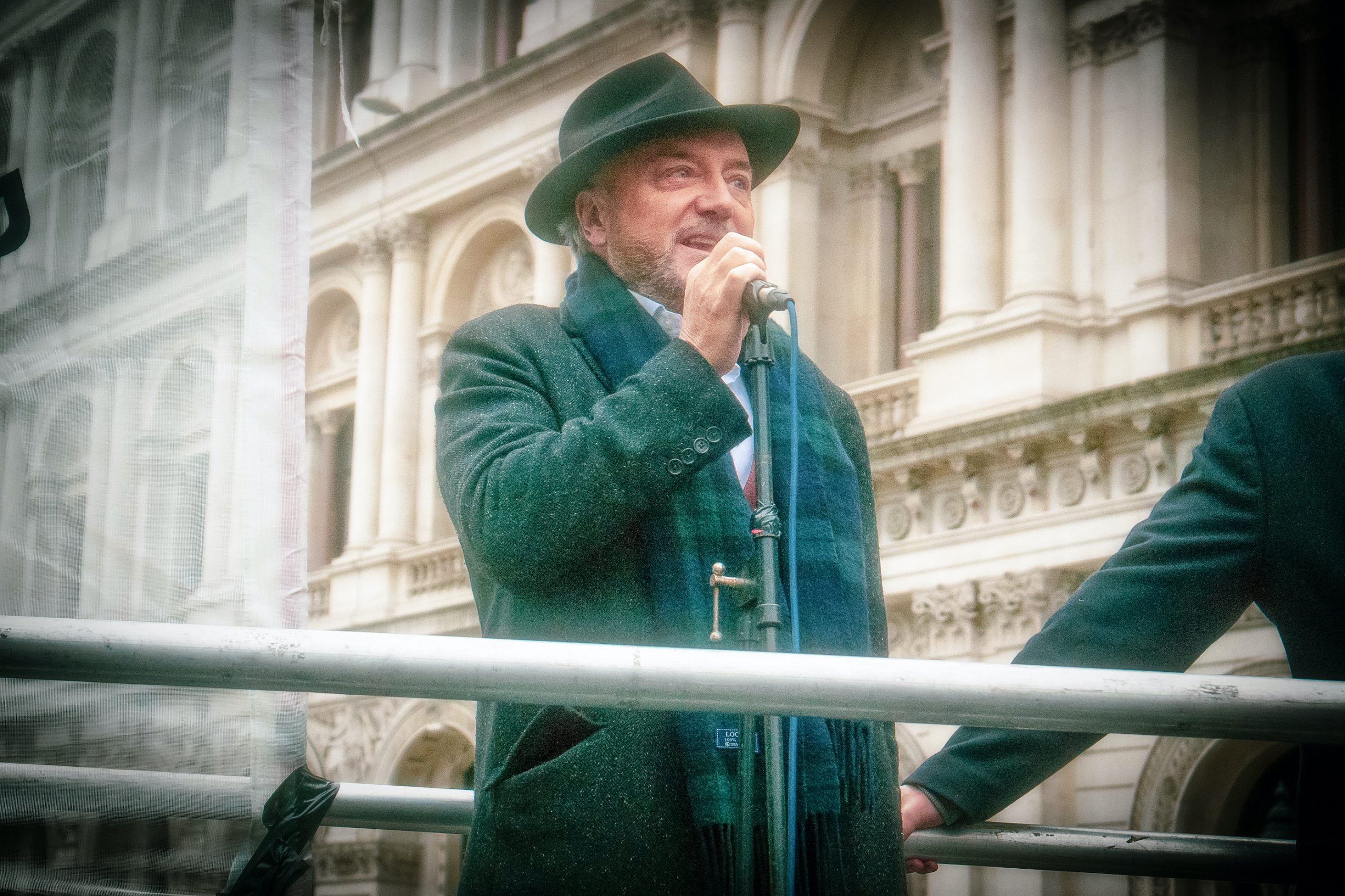 But there is no British Rush Limbaugh yet.

Talk show hosts like Iain Dale, Nick Ferrari and (Archibald) Mike Graham just won’t cut it. They all lack what their American counterparts have: charisma and humour. However, it’s almost inevitable that such a host will eventually turn up. The conditions are right.

Then there is Julia Hartley-Brewer, one of the few women in this game. She outmatches her male counterparts because she is quicker and meaner much of the time. She has taken a hard-line on Brexit and lockdown, even promoting falsehoods about the pandemic.

For example, Hartley-Brewer revealed the address of liberal Remainer Jolyon Maugham on her show when the barrister was facing death threats. She defended this on the grounds that his address was easily available online and he had made himself a public figure.

The UK talk radio scene is unpleasant, but also peevish, sanctimonious and whiny.

No man personifies its general tone more than Iain Dale, who made his name as a Tory blogger. Whereas the US radio scene digs into a well of resentment and appeals to the collective Id, the UK’s right-wing talk shows appeal to the super-ego.

We’re invited to blame ourselves for everything from poverty to the spread of coronavirus.

At the same time, so-called lockdown sceptics have carved out a position in UK talk radio. These people claim to be concerned about civil liberties, but a core part of the appeal of their message is the implicit demand to “let people die”.

Just as right-wing Leavers fantasised about a return to WWII-style rationing, the search for punishment continues.

The average listener is told to blame people worse off than themselves for their problems: immigrants, people on benefits, trans people and BAME people.

Much like the tabloid press, UK talk radio is shaping up to recirculate and reinforce feelings of resentment and mobilise those feelings against convenient political targets. But these talk show hosts are just cheap imitations of American shock jocks.

What’s misleadingly called ‘talk radio’ is only just taking off in Britain. ‘Talk radio’ is really about big personalities going on multi-hour rants with members of the public calling in to feed the rage.

The UK radio scene has had its fair share of controversial characters and scandalous moments. Many years ago, Tim Shaw caused outrage by propositioning Jodie Marsh on his show (and his wife sold his sports car on eBay for 50p soon after). Andrew Sachs and Russell Brand got into hot water for mocking an old man and his daughter.

Yet the UK has only had two figures that come close to US-style shock jocks: Nigel Farage and George Galloway.

Both are big personalities with more in common than outsiders might expect. The two of them are both Brexiteers who rail against identity politics and political correctness.

The two men once appeared on BBC Question Time and carefully avoided attacking each other, but this went much further than a non-aggression pact. During his time as a talk show host, Galloway invited Farage on as a guest to discuss current affairs.

In the run-up to the Brexit referendum, the two even tried to launch a left-right populist Leave campaign called Grassroots Out (GO). It was a failure because the pro-Brexit left hated Farage as much as the pro-Leave right hated Galloway.

After the 2016 Leave victory, Farage gave up his role as UKIP leader and took a job at LBC as a host. He later moved on to talkRADIO (owned by Rupert Murdoch), where he is a part of a roster including Julia Hartley-Brewer, Mike Graham and James Whale.

Not surprisingly, Farage has been happy to use his platform to give voice to lockdown scepticism. He has called Black Lives Matter a ‘Marxist plot’ and has fuelled the right’s obsession with Jewish billionaire George Soros.

Yet his friendly relations with Galloway are no aberration, Farage was close to RMT leader Bob Crow before he died. Crow and Farage had an agreement never to discuss immigration. This was the only way the privately-educated British nationalist and the Millwall-supporting communist could have a pint and talk politics.

Sad at the death of Bob Crow. I liked him and he also realised working class people were having their chances damaged by the EU.

By contrast to Farage, George Galloway was something of an anomaly in the world of radio shock jocks. A fierce critic of American and British foreign policy, Galloway comes out of the Maoist left and still has a soft spot for China and North Korea.

Galloway hosted The Mother Of All Talk Shows on talkSPORT from 2006 until 2010 and, after a six-year hiatus, returned to the airwaves with a new spot on talkRADIO. The second run was cut short in 2019 when talkRADIO cancelled Galloway’s spot.

Why did Galloway lose his spot? When Liverpool beat Tottenham Hot Spurs in the Champions League, Galloway tweeted: “No Israel flags on the cup!”

In case you’re not up on British football culture, Tottenham is a football team well-known for its historic Jewish working-class base in London.

This is far from the first incident with Galloway. He once claimed Israel was behind chemical weapons strikes in Syria and called for Israelis to be ‘banned’ from Bradford during his time as a RESPECT MP.

Just when we thought his run as a talk show host was over, Galloway relaunched The Mother Of All Talk Shows on Sputnik, where he has hosted a TV talk show for many years. The show is marketed as “the Open University of the airwaves”.

This time he is taking on identity politics, particularly trans rights. Long-time critics of Galloway will not be surprised given his record on women’s rights – his opposition to abortion, for example.

Although the UK is still waiting for a ‘true shock jock’, we have seen the early prototypes in action for many years. Galloway, Farage and Hartley-Brewer might one day be eclipsed, but they should be remembered as the people who helped make an American medium palatable to a British audience.

The United States has a long history of radio broadcasters acting as political and social advocates. Right-wing Christian preachers used radio in the early 20th century and Father Charles Coughlin was a pro-fascist radio personality in the 1930s and 1940s.

Coughlin broke crucial ground for America’s religious right, offering a mix of Antisemitic scapegoating and Christian services during the Great Depression.  Though a Catholic, echoes of his style remain heard today, in Evangelical talk radio and spiritual programming.

But the rise of US shock jocks, as we know them today, came in the late 1980s and early 1990s after the Reagan Administration tore up the ‘fairness’ rules for broadcasting. The FCC Fairness Doctrine had stipulated ‘both sides’ had to be granted equal time in broadcasting. This doctrine was jettisoned in 1987.

What followed was a right-wing revolution on the US airwaves.

Rush Limbaugh took his radio show national in 1988 and soon became the most famous conservative talk show host. Limbaugh had a great voice for radio and a sharp wit that cut through left-wing strawmen and burned them to the ground.

Limbaugh has made a fortune from shouting into the ether. The provocateur is still the top player, registering 15.5 million listeners a week in 2019. Now stricken with cancer, his noxious influence on US culture and politics will doubtless outlive him.

However, Limbaugh was not the only right-wing talk show radio host. He just became the biggest brand name in an increasingly crowded market. Another key figure is Michael Savage who has hosted The Savage Nation since 1994.

Savage (real name Weiner) is more nationalist than conservative. He specialises in anti-migrant tirades and has called for listeners to burn Mexican flags. This is why The Savage Nation has never quite garnered the same scale of following as Limbaugh’s show, but it has been influential.

Years before Donald Trump became president, Michael Savage was pushing the idea of building a wall on the US-Mexico border and getting Mexico to pay for it. The original idea was to use illegal migrants to build it and deport them once their work was completed. This is why Trump announced his candidacy on Savage’s show.

Despite being Jewish, Michael Savage has talked up the idea of a ‘white genocide’ and called for the US to cut off military aid to Israel. And Savage has incited violence on more than one occasion – even calling for the deaths of 100 million Muslims. “Would you rather us die than them?” he asked his listeners.

These antics got Michael Savage banned from entering the UK. The shock jock is still prohibited and has run into trouble with his show’s hosts. The Savage Nation is now just another podcast, but there are plenty of other options for conservative radio listeners.

What all of the US shock jocks have in common is the ability to speak to the rage of their listeners and channel their fear and loathing into airwaves. The concrete political content might be very little compared to the emotional pitch of reaction.

The political trajectory of talk radio in Britain is clear, though it has still to catch up with the US. Unfortunately, a combination of mass political disaffection and popular resentment make the UK more than ready for this American import. It’s all downhill from here.

Brexit will turn three on the last day of January, over six years since the 2016 referendum kickstarted Britain’s race to the bottom. END_OF_DOCUMENT_TOKEN_TO_BE_REPLACED

Be careful what you wish for. It may be a cliché, but it’s one the Greens are learning all over again. END_OF_DOCUMENT_TOKEN_TO_BE_REPLACED

Before his arrest, Andrew Tate was just another influencer with bad politics. END_OF_DOCUMENT_TOKEN_TO_BE_REPLACED