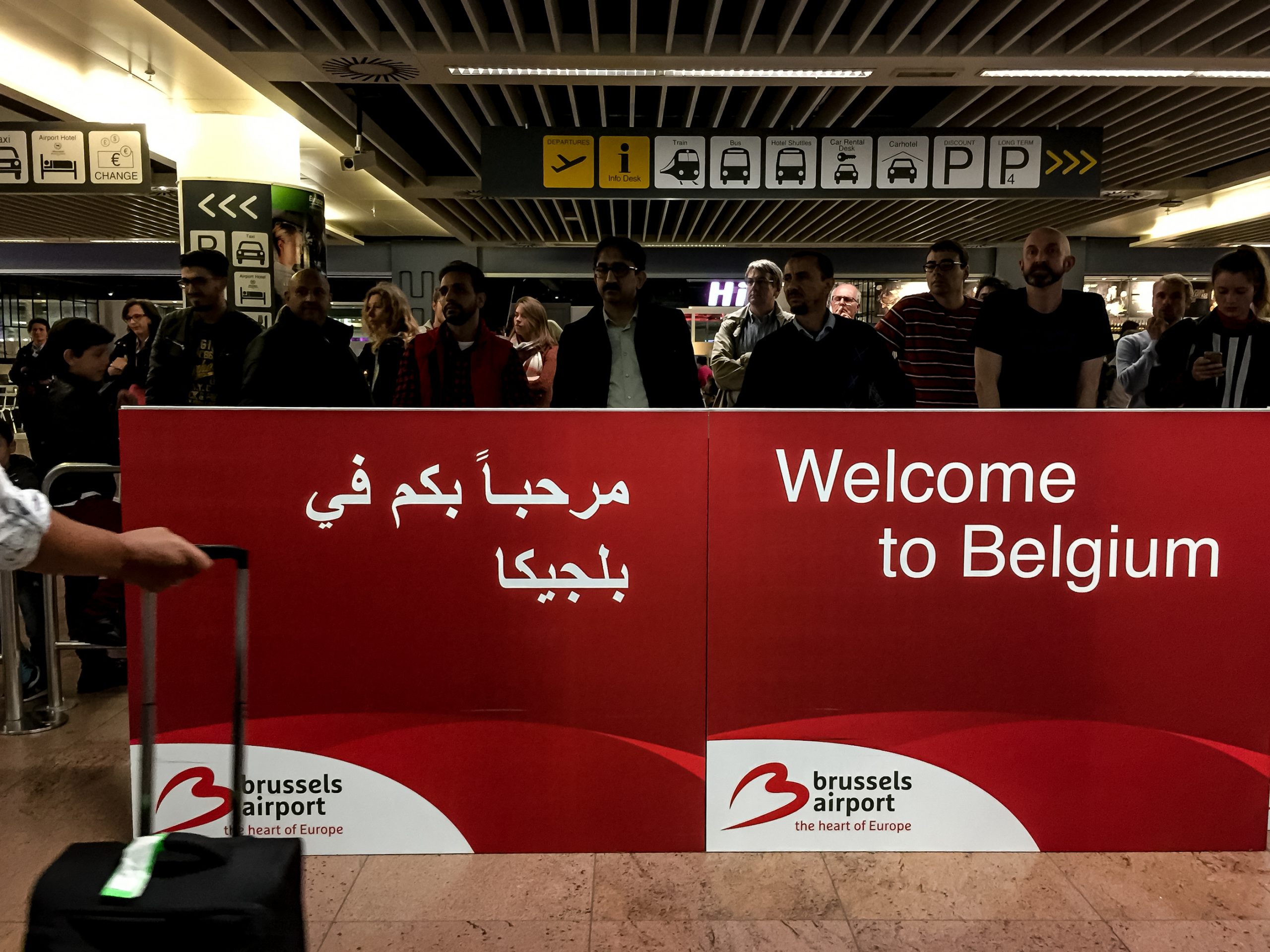 Well, not exactly. The border agent was just pretending he couldn’t hear. Why, no one could tell. These were Israeli Jews trying to get through, not Palestinians. They had no security excuses.

“Ima, Ima,” (Mother, Mother)  the young girl repeated, over and over again. Splayed out on a metal luggage cart, she held onto her abdomen like it was about to explode.

“Look at her,” the mother exclaimed in Hebrew. “At least let us back out of the line, so we can use the facilities on this side,” referring to the food and shopping court between security and the departure gates at Ben Gurion.

The officer would not let her move, even though it was clear the mother was willing to forego her flight to get her daughter to a toilet.

A kippa-wearing man in his early forties addressed the security staff in English, in a thick British accent. “Would you guys please let the family go? The child is clearly distressed,” or so I recall him saying.

He got no answer. All we could ascertain, from where we stood in line was that the officer in question was communicating something on his radio. The girl would have to remain put.

Pointing to her, the Brit looked at me and said, “This isn’t a checkpoint in the Territories. They can’t do stuff like this here. These people are Jews. It makes us all look bad.”

I nodded in agreement, as I watched the girl wet her pants. It wasn’t clear if what she was expelling was blood or diarrhoea. Whatever it was, it was humiliating to her and her mother.

At that point, the security officer let her through. Why he took so long, I’m not sure. The family would still have to get their bags and passports checked. However, that would be the last we saw of them.

Having made it to my gate, I breathed a big sigh of relief. What I’d just witnessed would have put the fear of God into me on any other occasion.

But, as with everything Israeli, my cynicism had adjusted my expectations in advance. For as disgusted as I was, it didn’t seem all that extraordinary.

That is, until the British guy I was standing in line with caught up with me. “They really need to get a handle on this,” he said. “I didn’t make Aliyah for nothing. This is really disappointing.”

Hearing his words helped melt my frozen heart. He made me jealous. If only I would have had his choice of being able to immigrate to such a dream and get as upset as he was.

For most of my childhood, I was shunted around the world by my Israeli father. I suffered from enormous angst about being outside Israel. But I spent just enough time in Israel to develop a thick skin. Too thick, I wager.

But I’d never moved back, despite how often I was encouraged to do so. Yes, I have repeatedly considered it, for work and family, but never for political reasons. Precisely for reasons like this.

Of course, the security services would repeat behaviour learned in their relations with Palestinian Israelis and in the West Bank, and Gaza. The challenge has always been to contain it.

This was yet another example of how the Occupation had influenced us to mistreat each other. I wanted to say I told you so. But this was a stranger, and he’d clearly arrive at the same conclusions.

Frustrated for not being more sympathetic with his disappointment, I opened my laptop on the flight to Brussels and tried to summarise what had happened. At the very least, I wanted to capture my coldness.

No matter how hard I tried, I just couldn’t do it. I was also tired. My family had been exhausting. Besides, I’d been seated by the window, and didn’t have room to type. It’s not time yet, I reasoned. I’d find new inspiration.

That motivation, I found, would come far sooner than I imagined, and would be a lot blunter. Four hours later, to be precise, as I stood in line at Brussels Airport, having my passport checked, at immigration.

“Mr Schalit, please come with us,” I was advised, with nary an eye on my Israeli passport. I’d been coming through Zaventem for several years, without incident, as my employer was headquartered there and I came to work there every month. Why now? It felt like someone was waiting for me.

Escorted to a security office, I was eventually seated in the presence of two Flemish-speaking officials, one of whom played the bad cop, the other good. They were sincere in their roles, but it was a hackneyed interrogation.

The tough guy led the charge. His questions were predictable. But, having grown up with a military father, I knew it was in my best interest to be polite and not display my contempt for the proceedings. I played along.

The problem, the officer made clear, is that he didn’t believe I am who my passport said I was. “Why are you using an Israeli passport but speaking English with an American accent?” he asked. “Who are you?”

I responded that I was a dual citizen of Israel and the United States and that I’d been born and educated there, to Israeli parents. “At least half of all Israelis are dual nationals,” I told them.

The bad cop gave me a sceptical look, even though he could see my place of birth in my passport. It was all there. “I prefer travelling on my Israeli ID,” I said. “My German visa is attached.”

At one point I recall asking the officer if he had encountered Russian Israelis before. “There are a lot more of them than us,” I explained. “They don’t speak English with Israeli accents, either.”

Eventually, the conversation concluded. I asked to be released, but the officer refused. The other official present requested he relent, but was rejected. They argued with each other. The nice guy again got overruled.

Two hours later, after the bad cop called the Israeli embassy, I was finally let go. I was who I said I was, I was told, but was not apologised to for being detained. I’d find my bags waiting for me at baggage claim.

Little could we anticipate that, two weeks later, the very same airport would get bombed by Islamists who happened to be Belgians, not foreigners. I could not help but savour the irony at how misguided my detention was.

I was also lucky. I just missed the attacks by transitioning home from my head office to Berlin, two days before they took place. I got to watch them from the safety of Israel, where a family emergency had brought me back.

Taking it all in from the tower block my elderly parents had moved to in Tel Aviv, not long before my father’s death the year before, I found myself overwhelmed by the dissonance of witnessing the attacks from Israel.

Here I was, in a region of the world always denounced for exporting its conflicts to the West. Yet, in spite of being affiliated with ISIS, the terrorists that staged the Brussels bombings were Europeans, not Middle Easterners.

Israel hadn’t saved me from Europe, as it was designed to do. It was just an accident of fate I had escaped. There was nothing ideologically significant about my good fortune. But there was in the perspective it offered.

All I could do was think back to my experiences a fortnight before, at both Ben Gurion and Brussels, and wonder what it was that makes security personnel so dense and unfeeling. Are they really that stupid?

I long ago gave up on psychoanalysing them. What you see is what you get. They’re not social workers. What’s more important is understanding their impact on civilians like me, who hail from highly militarised societies.

Smarting from my interrogation, I collected my bags and sought out a taxi to take me to into town. It was 2 AM, and I had to be at work at 6, to edit the morning news. I was overwhelmed by feelings of resentment and anger.

It was then that the numbness I felt about the child, writhing in agony before me, at Ben Gurion, disappeared. Her pain became mine, as I recognised I’d been disciplined by the same mindless security machinery abroad.

An earlier version of this article was published in Souciant. Photograph courtesy of the author. All rights reserved.

Brexit will turn three on the last day of January, over six years since the 2016 referendum kickstarted Britain’s race to the bottom. END_OF_DOCUMENT_TOKEN_TO_BE_REPLACED

Be careful what you wish for. It may be a cliché, but it’s one the Greens are learning all over again. END_OF_DOCUMENT_TOKEN_TO_BE_REPLACED

Before his arrest, Andrew Tate was just another influencer with bad politics. END_OF_DOCUMENT_TOKEN_TO_BE_REPLACED