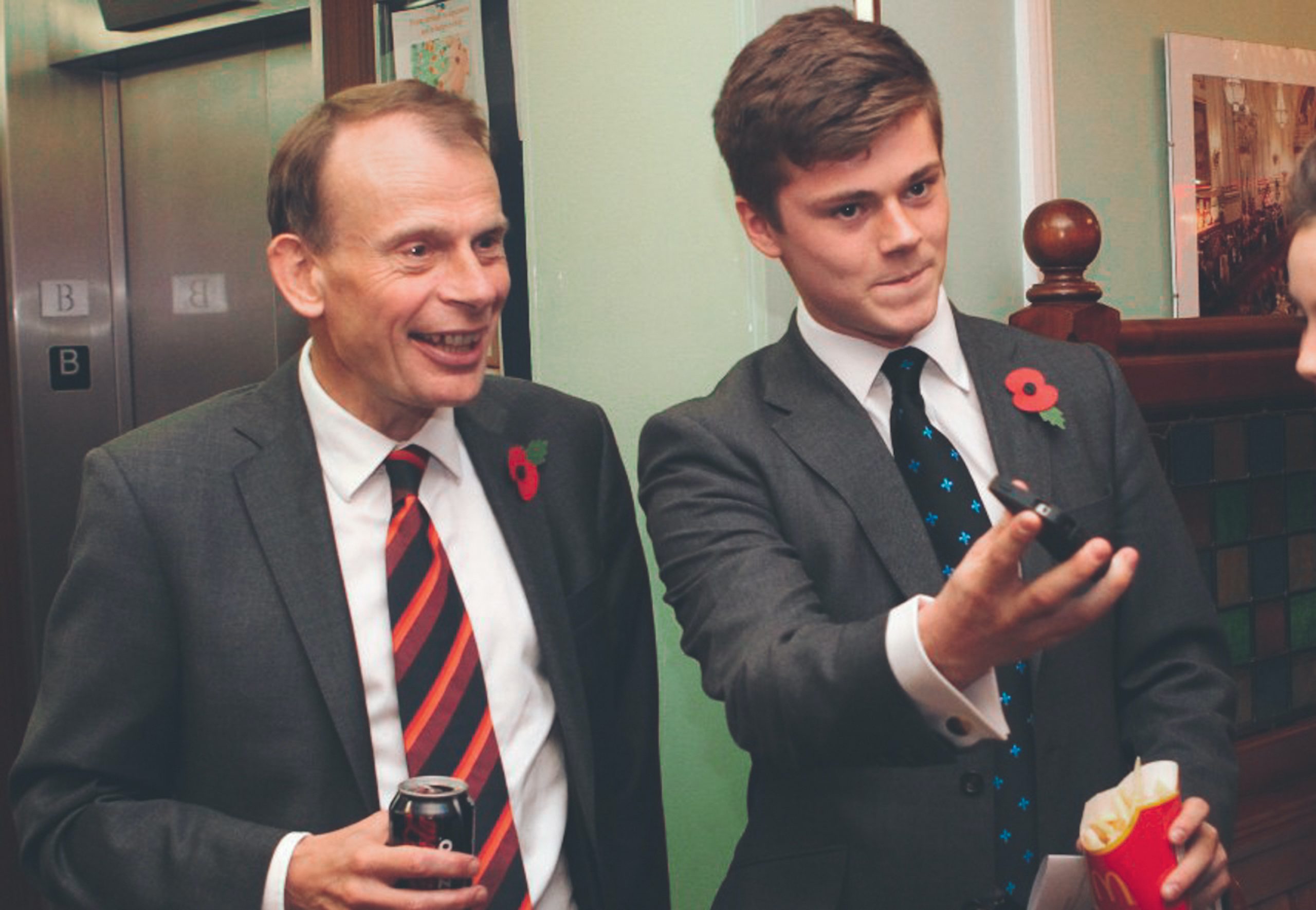 “How can you know that I’m self-censoring?” Andrew Marr (L) asked Noam Chomsky.

So we shouldn’t be surprised that China has banned BBC World News after the UK revoked CGTN’s broadcasting license. The Chinese Foreign Ministry even described BBC coverage as “fake news”.

The reasons are obvious: the BBC has run damning reports of Chinese policy in Hong Kong and Xinjiang. Beijing claims the BBC has run propaganda from the US State Department, but they also claim BBC coverage of China’s handling of COVID-19 has been riddled with falsehoods.

However, BBC World News was never available to the average Chinese citizen. It was watched in international hotels. So the block is more tit-for-tat than a serious change in China with its harsh opposition to press freedom.

And yet some people are surprised. The BBC is the heart of the British mainstream media. Not only does the BBC set the agenda in UK news coverage. The broadcaster is a trusted international brand.

CGTN lacks the legitimacy and trust that the BBC has built up over several decades. Nevertheless, the Communist Party of China (CPC) has set out to turn CGTN into a global media player since Deng Xiaoping pushed the party to embrace capitalism.

The aim is to win over foreign audiences to support policies that favour the CPC long-term, such as its Belt and Road Initiative,  a global development and investment program that critics charge is intended to expand Beijing’s political influence.

At the same time, CGTN has a space in its coverage for political analysis and commentary that sits outside the mainstream in many Western countries.

For example, the news channel grants the Palestinians sympathetic coverage and sympathises with Iran in its conflict with Israel. Echoes of Beijing’s Cold War-era anti-colonial politics can be heard throughout.

However, such programming overshadows China’s longstanding, and deepening economic ties to Israel, an unofficial node in its Belt and Road Initiative.

The problems with CGTN are real, but the reasons the channel has been banned in the UK are not just down to the quality of its broadcasting.

The same is true for why China has blocked the BBC. This is about power and who wields it.

From Russia Without Love

There is another controversial foreign-owned media brand in Britain: RT UK. The Russian state broadcaster has cultivated a large audience and styles itself as the alternative to the mainstream.

When RT UK was launched in 2014, then-Russian presidential administration chief Sergei Ivanov was beamed into the studio to thank the UK team for setting up what he called a “propaganda channel”.

Ivanov did so with a nudge and a wink, but the journalists understood there is always some truth in irony.

“We knew what we were about, though it’s important to make a slight distinction between RT UK and the international channel,” a former RT employee told The Battleground.

By contrast to CGTN, RT’s coverage may be devised to split public opinion in Western countries that have clashed with the Putin government. Anything Russia-related comes with baggage.

The UK newsroom feared the wrath of Ofcom since Iranian state-owned channel Press TV lost its license in 2012. Ofcom fined RT UK for breaching its broadcasting standards over the 2018 Salisbury poisonings.

Naturally, RT has no shortage of critics for its crude coverage of the Ukraine crisis and the Syrian Civil War. However, people who have worked for RT UK view the organisation and its internal culture as more normal than mainstream critics believe.

“Editorial standards were pretty high on the TV side in my time. If there was a spectre haunting RT, it was the spectre of Press TV,” said the former RT staffer. “It was like a newsroom like any other in terms of technical stuff.”

Although RT coverage of anything Russia-related is notoriously unreliable, the channel has provided a platform for left-wing journalists who struggle to work with mainstream news platforms.

Despite what outsiders think, RT journalists tend to have a very clear idea of what they hope to achieve and the limits imposed on them. They know what they can get away with when they are not covering Syria or Ukraine.

As much as the British mainstream heaps scorn on RT, the truth is that the Russian broadcaster is a welcome presence in the UK. British journalists at Murdoch-owned papers don’t have to worry about the abysmal quality of their work because they know RT is even worse.

Even when an RT journalist shows more guts than Andrew Marr, BBC journalists can tell themselves they are the real crusaders and speak truth to power. Even though, of course, as its pro-government bias over Brexit has drawn repeat comparisons to RT’s pro-Kremlin editorial stance.

After Russia invaded Crimea in 2014, RT presenter Abby Martin stated live, on-air: “What Russia did is wrong.” Martin survived for another year at the broadcaster, before finally deciding to step down.

RT had only nice things to say about Martin’s tenure.  But it’s reasonable to assume that it was glad to see her go.

Conversely, when the BBC Breakfast presenter Naga Manchetti attacked Donald Trump for a racist Tweet, telling The Squad (Representatives Ilhan Omar, Alexandria Ocasio Cortez, Ayanna Presley and Rashida Tlaib) to “go back to the totally broken and crime-infested places from which they came”, the BBC complaints unit ruled Manchetti had breached editorial guidelines.

No BBC presenter resigned on-air over the invasion of Iraq. But RT presenter Liz Wahl did just that when Russia invaded Crimea.

“I cannot be part of a network funded by the Russian government that whitewashes the actions of Putin,” said Wahl. “I’m proud to be an American and believe in disseminating the truth, and that is why, after this newscast, I’m resigning.”

Far from dissenting, BBC political editor Andrew Marr cheered on Blair’s war. He was given a talk show slot for his service, while his successors Nick Robinson and Laura Kuennsberg have followed him.

“How can you know that I’m self-censoring?” Marr asked Noam Chomsky in a 1996 interview.

“I’m sure you believe everything that you’re saying. What I’m saying is that if you believed something different, you wouldn’t be sitting where you are sitting,” said Chomsky.

Much like The New York Times, the BBC sets the contours of public debate and its coverage becomes history. Contrary to the popular misconception, the BBC does not have a left-wing bias and its coverage really straddles the centre of politics.

This is also something the BBC has in common with The NYT. It’s standpoint really oscillates around the so-called ‘centre-ground’. Yet the corporation is as much constitutive of the centre, the left and the right, as it channels the flow of discourse.

Although the BBC hopes to stand as an impartial intersection, the truth is far more complex. If the BBC wants to get both perspectives on a political issue, it usually asks a Conservative politician and a Labour figure to comment. This often excludes everything beyond tribal affiliations.

Programmes like Question Time and Newsnight have just become opportunities for the Westminster political class to assert itself. Discussions can only take place within the realm of certain agreed assumptions.

The BBC definitely has higher standards than CGTN and RT, but that’s not enough in itself. The broadcaster may have a dark future since Conservative governments continue to work to undermine its funding and independence.

Many viewers will continue to seek out alternatives to the BBC precisely because of the conformity and lack of diversity it represents. Even Chinese and Russian propaganda might be preferable to some audiences.

The media war is far from over.

I don’t approve of bans on broadcasters, but for the BBC to call itself “the world’s most trusted” and claim that it reports “fairly” and “impartially” is ludicrous. It relentlessly promotes a narrow ideology and is at least as biased as RT, PBS & VOA. https://t.co/w25Jlgegq8

Photograph courtesy of US Embassy London. Published under a Creative Commons license.

Brexit will turn three on the last day of January, over six years since the 2016 referendum kickstarted Britain’s race to the bottom. END_OF_DOCUMENT_TOKEN_TO_BE_REPLACED

Be careful what you wish for. It may be a cliché, but it’s one the Greens are learning all over again. END_OF_DOCUMENT_TOKEN_TO_BE_REPLACED

Before his arrest, Andrew Tate was just another influencer with bad politics. END_OF_DOCUMENT_TOKEN_TO_BE_REPLACED