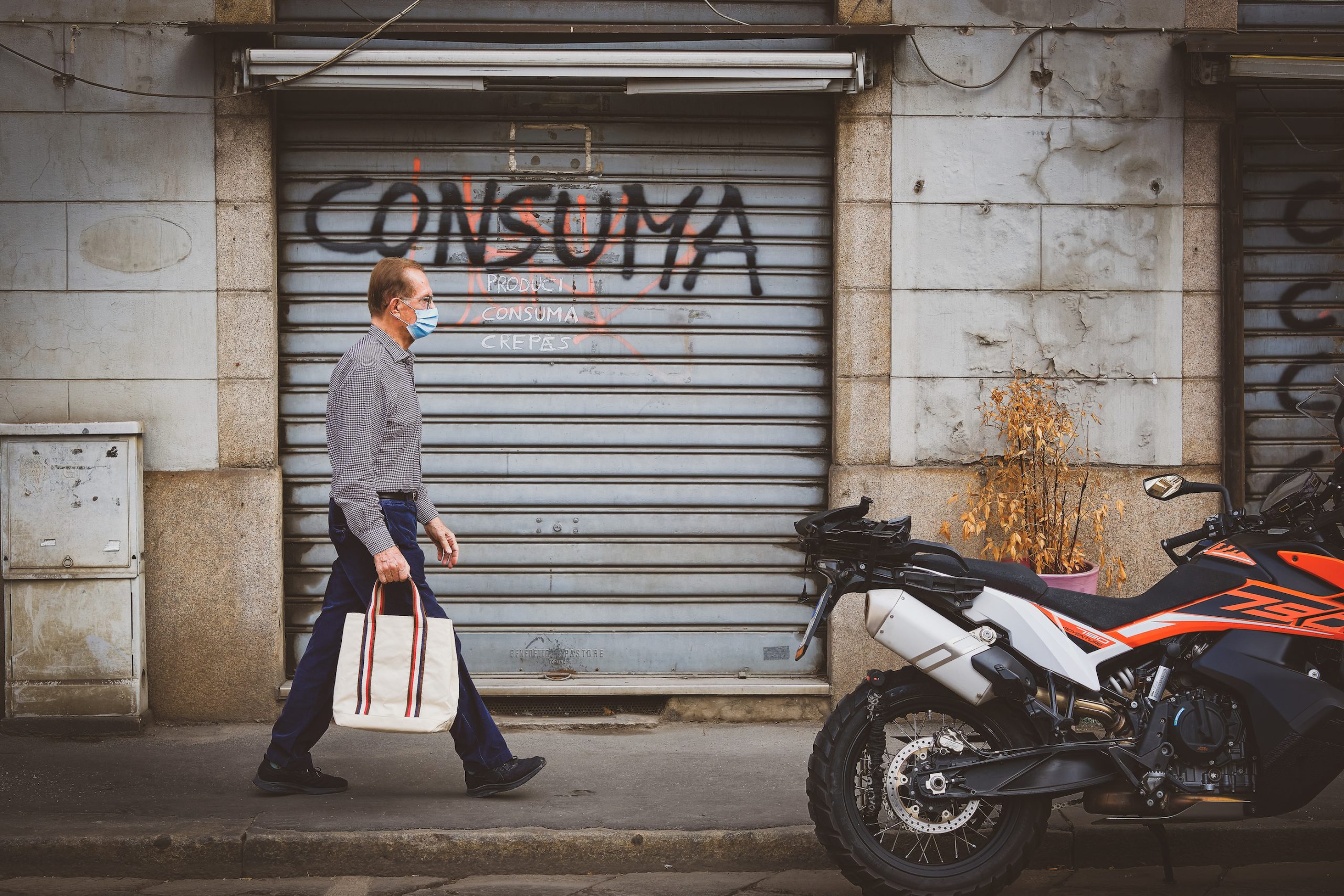 My wife had decided not to leave home until it was safe to do so, so we could protect our immunity-challenged relative who lives with us. We were eager to see our daughter, who lives in another part of Italy.

COVID woes had become merely annoying. If we could work and buy groceries, it was nothing more than an inconvenience.

The first wave had been spooky, something we had never experienced, but it felt remote. When summer came, it was like we went through it, and it was not too bad. We were healthy. None of our relatives or close acquaintances had fallen ill.

“Is global warming slowing down?” we naively asked ourselves. It should have. Once ubiquitous jet streams had disappeared. Car traffic was minimal. Air pollution had decreased to such a point that the night sky was as vibrant and clear as in the countryside of my childhood.

We were almost elated. This epidemic thing was not all bad.

When summer finally came, between July and early August, it was like COVID-19 had finally been shelved somewhere we, thankfully, could not see.

The small Thyrrenian Sea seaside town my daughter lives in was not as busy as it had been the year before, but still, people were there. Wearing masks (not everyone), keeping away from people they did not know (not always), a broken sort of normality had returned.

But we were not entirely sold on the idea the epidemic had stopped, either.

Italy paid a stiff price for the first wave. A price mostly due to the awful virus management of some of the country’s local governments. Worst of all Lombardia, which hosted nearly a third of Italy’s COVID fatalities.

This meant that 50% of Lombardia’s healthcare network, once a distributed lattice of local clinics and family doctors, had been sold to large healthcare companies, who then moved all services inside giant “healthcare centres”, i.e., hospitals, to reduce costs and increase revenues.

Once the epidemic began, these places became death traps, where sick people would come seeking assistance and infect others, causing the crisis to get completely out of control.

The people responsible for this, Lombardia’s governor, Attilio Fontana, and the head of the region’s healthcare system, Giulio Gallera, should have been stopped long ago.

But Italy’s central government was extremely weak. Fearing a crisis that could lead to a new election, that would have been won by the populist right, they were left alone to worsen the situation. (Gallera resigned, in January, due to public anger over his handling of the pandemic.)

That both officials come from right-wing parties – the Lega and Forza Italia, respectfully – underlined the hands-off approach the Conte government took with them.

By June, we were just happy summer had arrived and had been finally allowed to travel to other parts of the country.

We had long since discovered that once banal actions, taken for granted, could turn into acts of freedom, with which we would obsess.

For example, before the pandemic, I thought that driving two hours to see our daughter was the easiest thing in the world. Before long it became the hardest.

But summer came, and it did not take too long for all the old habits to return. People stopped using masks with a speed that was not unexpected, but still surprising.

Bars filled again; restaurants were packed tight again. The new rules made the density of patrons far smaller than it used to be. But still, we had crowds again.

“Optimism” was the new buzzword. Nobody wanted to be told again and again the epidemic was still far from gone. As the number of new cases dwindled, by late July we were certain the worst was over.

Black Lives Matter and the US elections had become the first tier of news on Italian television. It was not exactly normality, but a new normality, nonetheless.

And so, like a thief in the night, the second wave took us totally by surprise.

It will take a long time to understand why we were so unprepared. Denial played a significant part.

When the numbers began to rise again in mid-September, at first we thought it was the fault of the few who had insisted on going on vacation in “risky” countries.

Then we thought it was the fault of young people who insisted on partying, despite the restrictions.

It quickly became evident that some parts of Italy – again, mainly Lombardia – had been given all summer to prepare but had refused to do so.

Still, it did not seem like a big deal. But it quickly became one. It was inevitable that infections and death would increase. Public transportation and the workplace were the hotspots.

It had become an article of faith that the size and the frequency of buses, trains, and the metro had to be at least tripled. Italy depends on public transportation, particularly in its big cities.

But by October it was clear we remained stuck in a pre-COVID limbo.

The problem was compounded by the fact we were told, again and again, that a new nationwide lockdown was impossible, as its effect on Italy’s economy would have been devastating.

This time, the pandemic was close and personal. People you knew got infected. Neighbours got hospitalised. Friends, even young friends, began to die.

One case was particularly tragic. Someone my age, with little more than incipient diabetes. In one week he went from complaining about a persistent cough to hospitalisation, to lung failure and death.

We had spent many early summer mornings together, having breakfast by the sea, thinking about what we would do once this COVID madness finished. Now he was dead, and we could not even go to his funeral.

Another COVID victim: the old cliché that the virus makes no distinction between rich and poor. This virus did.

People who could afford to work from home, without losing their livelihood and not take public transportation, had an enormous advantage over others.

The others, who had to take an overcrowded bus every day, who had no one to buy groceries, were forced to go to their workplace.

One case stands out: public administration employees who could telecommute were still asked to be physically present in their office one or two days per week.

“So, we help bars and restaurants whose business is the lunchtime break” was the lame excuse. Many who had done everything they could to stay healthy got infected this way.

Getting sick for causes unrelated to COVID had long been a major problem by itself.  Hospital tests, routine surgery, all the normal medical processes had.

Getting hospitalised, even without COVID, had become something to fear.

Old, fragile people would end up dying alone in a hospital room, without their relatives and friends nearby, because hospital rules forbid them from visiting. Only the lucky or the wealthy could hope of dying at home. Dying in 2020 was unlike dying any other year.

By November we had moved from fearing a full lockdown to hoping for one, thinking it could save the Christmas holidays. But the plot curves of the number of infected and dead roared up again to daily battalion-sized losses. Hundreds every day, in a country the size of California.

Intensive care units filled again. My cousin, a COVID doctor, was back to 16 hours daily shifts. Worst of all, a routine test revealed that a member of our family, the most vulnerable of all, had become infected.

However, he never developed symptoms and got sick. It was later revealed the test our relative was given had been faulty.

Three weeks spent checking the conditions of our relative every five minutes, monitoring any change of breath, sleeping with both eyes open, trying to keep calm and stay level-headed without really succeeding.

Walking from one end of our apartment to the other, and back again, hating life.

It felt like no matter what we did, we were guilty. COVID-related guilt, of all things, is a 2020 buzzword.

Christmas finally arrived, and the situation had not improved. TV news and debates were divided between hopeful rants about a future vaccine rollout, and virologists and epidemiologists (the new TV superstars) arguing about who was to be blamed for the disaster.

If the rest was not enough, the non-stop ambulance howling triggered a conspiracy-minded side effect.

A rumour spread in Torino that ambulance drivers had been told to drive around with their sirens wailing at full volume, to spread terror.

Ambulance chasing became replaced by ambulance blocking, where people would force the crew to “demonstrate” they had a real COVID victim aboard.

Authorities had to intervene and quite a few people were denounced for “obstruction of a public service”.

The rest of the city was outraged, and the decades-old cliché about Torino being contaminated by “superstitious southern mentality” got resurrected.

From our point of view, it was quite understandable. Most people never feel the smell of death, its physical presence 24 hours a day, every day of your life.

Death, or the possibility of death, used to be something for old people, or a few unlucky souls. 2020 changed that.

No year in recent history inspired as much hatred as 2020. The cheerful song “Vaffanculo 2020” (Fuck off, 2020) trended on YouTube and even got frequent airplay.

Christmas was an empty, depressing experience. New Year’s Day was filled with spiteful hope. As bad as 2021 could be, it would be better than the hated 2020. Vaffanculo 2020. Nice to see you, 2021.

So far 2021 has been better, at least marginally. The second wave has slightly abated, but we are not yet back to full remission, and now we know better than naively thinking “we’re out of this”.

We’re waiting for Lombardy to stop being Italy’s #1 hotspot, and maybe, just maybe, institute a COVID Nuremberg to judge the culprits of the 2020 disaster.

We’re also waiting for the new Draghi government, which replaced the Conte government in February after a bloodless, piloted institutional coup, to steer the COVID crisis in a different direction.

Mario Draghi, a former European Central Bank governor, was sold to the public as a “competent man”, a technocrat who would finally wake up all the bureaucrats and politicians responsible for the Italian disaster.

It was rapidly clear Draghi is no technocrat at all, but a very shrewd politician whose responsibility was to avoid an election, co-opting the right-wing Lega into the government (which now features every single entity present in the Italian parliament, excluding the far-right Fratelli D’Italia).

Most of the ministers were already here with former Premier Giuseppe Conte. The new names are well-known faces, including a couple of comebacks from the Berlusconi era.

Conte, while hardly prepared for the tragedy Italy faced in 2020, did not do too badly, and had to fight with serious incompetence at the regional level. “#sempreConte” (Always Conte) tagged videos even began trending on YouTube.

Not that we care too much about this. Italians are always supremely cynical about politics. Cynicism has become a tool for survival.

We want the vaccine; we want the epidemics to stop. That is it. We’ll worry about our Byzantine political ways later.

In the middle of the third wave #Covid_19 with new variants that are born every day this is Milan on Saturday night .. Until we develop a conscience we will never be able to overcome the virus#Italy #coronavirus #lockdown https://t.co/AAs7loQOgz

Brexit will turn three on the last day of January, over six years since the 2016 referendum kickstarted Britain’s race to the bottom. END_OF_DOCUMENT_TOKEN_TO_BE_REPLACED

Be careful what you wish for. It may be a cliché, but it’s one the Greens are learning all over again. END_OF_DOCUMENT_TOKEN_TO_BE_REPLACED

Before his arrest, Andrew Tate was just another influencer with bad politics. END_OF_DOCUMENT_TOKEN_TO_BE_REPLACED