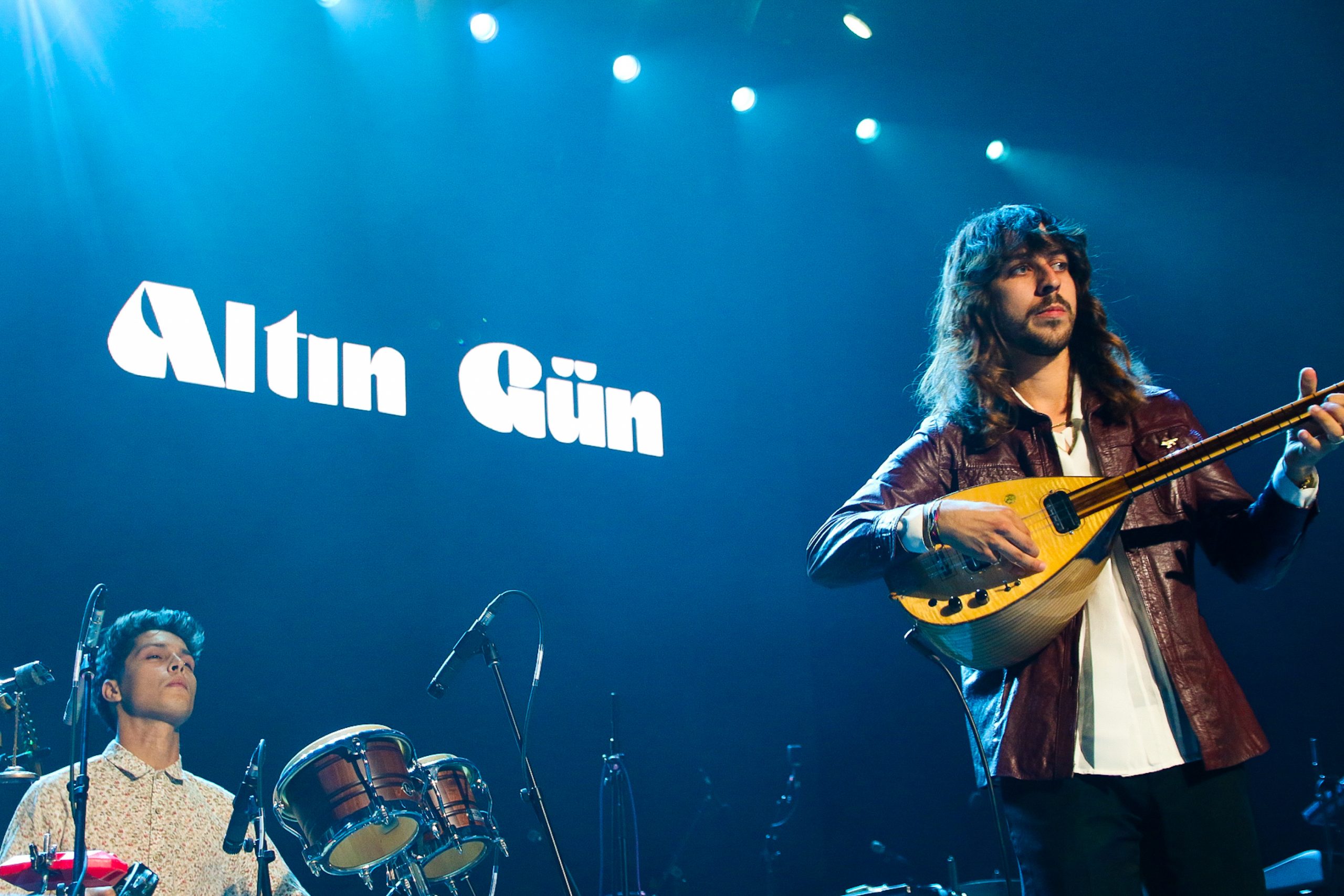 Pulling material from all over the world, label founders Chris Eckman and Peter Weber have clearly prioritised diversity over other concerns.

While their roster is consistently impressive, it ranges too widely to facilitate the narrow, genre-based branding that other independent labels have been known for.

Irregular beats that sound like they’re coming from the inside of an enormous steel drum; female vocals winding their way through rubber-band polyrhythms; strings layered to create a drone simultaneously medieval and modern; what Glitterbeat records have in common is a rejection of the common, a willingness to break the rules of mainstream popular music in pursuit of wonder.

Consider Zan (Woman), the latest album by Israeli musician Liraz. It doesn’t take long to tell that it is playing havoc with tradition.

On remarkable songs like Nafas (Breath) and Mastam (Intoxicated), Liraz and her collaborators manage to create buoyant, Farsi-language electronic pop that simultaneously evokes her family’s Iranian homeland at every turn.

Working with Iranian musicians who had to keep their participation secret, Liraz channels her experiences living in the large LA diaspora affectionately-dubbed “Tehrangeles”, into an alternate timeline for Persian culture, in which its progressivism in the 1960s and 1970s would have been pried loose from the brutal repression of the Shah’s rule and allowed to flourish.

The Iranian musicians who worked clandestinely with Liraz were risking a great deal. Although the stakes may not be as high for the Amsterdam-based Turkish emigrés in Altin Gün, with their new LP, Yol, it’s hard not to see a parallel in their decision to exchange the psychedelic rock that was their calling card for glossy, 1980s dance-pop.

Both albums recall Lebanese indie icon the Yasmine Hamdan-led Y.A.S.’s stunning 2009 album Arabology, which demonstrated how much potential energy lay trapped in electronic dance music, buried under layers of nostalgia for an era defined by the cultural and linguistic imperialism of the United Kingdom and the United States.

White people in those countries are accustomed to thinking of 1980 as the midpoint in a period of massive political and social change, spearheaded by Margaret Thatcher and Ronald Reagan.

In typically myopic fashion, however, they fail to register the degree to which the influence of Greater Anglo-America played a destabilising role throughout the largely Muslim MENA region.

From Afghanistan to the Iran-Iraq War and Israel-Palestine, it’s all there. Britain may have withdrawn from its colonies but rode shotgun as the US took over its former colonial roles.

Perhaps that is why these artists, whose emotional ties to the region have been intensified by exile, were drawn, decades later, to the popular music most associated with the early 1980s.

It wasn’t just in London and New York that sounds identified with the future became a soundtrack to ideologies bound up with the past.

The way Liraz and Altin Gün rework the electronic dance-pop of that time also hearkens back to Yemenite Israeli singers like Ofra Haza and her producer, Bezalel Aloni, who created the blueprint for this type of musical fusion in the waning years of the Cold War.

When Arab Jews reframed elements of their cultural heritage within the context of early electronica, they duplicated their split identities – Middle Easterners, but also Israelis, with all that implies – at the level of form.

To be sure, similar attempts at cultural fusion were taking place elsewhere, most prominently in North Africa, where idioms like Rai reached out to Western dance music equally. But the Israeli influence on what eventually became world beat came first, through the commercial success of Ofra Haza.

Liraz’s music is a direct descendant of this negotiation between tradition and modernity, in which Jews from Western Asia and North Africa confront the reality of an Israeli culture whose identity cannot be reduced to the religious overdetermination of the state.

Less well known in the Anglo-American music industry were similar changes to migrant music within Francophone Arab communities throughout Europe, particularly with regard to hip-hop and house.

Because first hip-hop and then house went global during the 1980s, de-anglicising them has a structurally similar, if much bigger, impact, as the treatment of electronic dance-pop by artist like Liraz and Altin Gün attests.

Both represent an implicit conviction, to borrow a formulation from African-American cultural theory, that, even if the master’s tools cannot be used to destroy what he has built, they can certainly help to renovate it in deeply meaningful ways.

That seems to be the guiding principle behind the whole Glitterbeat label.

To be sure, many of its releases are superficially compatible with the world beat sensibility that took the music business by storm in the 1990s. But the imprint seems keen to avoid the artistic expectations for international music which emerged from that era.

Although Glitterbeat began as a spin-off of Glitterhouse, which distributed the work of iconic American indie label Sub Pop in the late 1980s and early 1990s and continues to be associated with alternative rock, it doesn’t try to appeal to that demographic.

Glitterbeat releases tend to experiment a little too much to satisfy the sort of ageing hippies who came to world music in the wake of rock and roll’s aesthetic retrenchment. The music is a little too modern-sounding for that.

Instead of the “Third World” consciousness that developed in the immediate post-colonial period of the 1960s, the label promotes a diasporic one, forever divided, yet all the more compelling as a consequence.

One always hears a bit of “here” and “there” in the arrangements of Glitterbeat artists, with nods to Western idioms like electronica and hip-hop. To put it bluntly, this is music that would rather dismantle tradition than repackage it for Western audiences.

But Glitterbeat also distances itself from the more subtly pernicious fetishisation promoted by the Sublime Frequencies label, which released a series of records documenting the sound of various exotic locales but seemed strangely resistant to the realisation that the far-away was now close to home.

For Glitterbeat, the foreign is part of home now, which is what makes their records so refreshing.

This is music that reflects the presence of the outside world inside our own – the German Späti (night shop) owned by Pakistani migrants selling Pakoras alongside Berliner Kindl – not music recorded on location, broadcast for the voyeuristic satisfaction of an audience watching the Discovery Channel.

That is surely why Glitterbeat has been careful to round out their roster with artists who do not fit traditional notions of world music, such as the beloved left-wing punk band The Mekons; New York-based 75 Dollar Bill, which combines rhythms from a variety of traditions with guitar that conjures the blues; and Orkesta Menodza from my current home in Tucson, Arizona, which combines a vast array of influences from the region’s highly politicized borderlands.

Indeed, Glitterbeat artists seem to take special pleasure in musical journeys that complicate our sense of how cultural flows work.

Maybe the best release of the label’s strong 2020, Tunisian emigré producer Ammar 808’s Global Control/Invisible Invasion transplants the Mahgreb-inflected Brussels sound for which he was known to the Tamil Nadu region of Southern India, where the interplay between these three rich traditions creates music that defies categorization.

Every track demands that you stop worrying about how to classify it and start dancing.

At the same time, though, it’s impossible not to recognize that you are listening to a document of a less destructive mode of globalisation, in which asymmetrical power relations are thematised and subverted by cross-cultural exchange in which strength derives from sharing freely.

The albums by Liraz and Altin Gün obey a similar logic. They differ too sharply from mainstream Anglo-American pop to be regarded as attempts to imitate it. Yet they also do not see the need to reject its pleasures on principle.

By promoting this kind of confident cultural miscegenation, Glitterbeat opens our ears to the possibility that we might one day live in a world where mutual respect triumphs over the pursuit of dominance.

Krzysztof Kieślowski’s 1976 film The Scar, which chronicles the construction and operation of a large chemical factory, breaks many of the rules that had governed narrative cinema since the silent era. END_OF_DOCUMENT_TOKEN_TO_BE_REPLACED

The Russian government is awarding prizes to Macedonian writers. END_OF_DOCUMENT_TOKEN_TO_BE_REPLACED

The 1970s was a decade of broken dreams. The end of the postwar boom brought to a close the era of middle-class liberalism in Europe and North America. END_OF_DOCUMENT_TOKEN_TO_BE_REPLACED