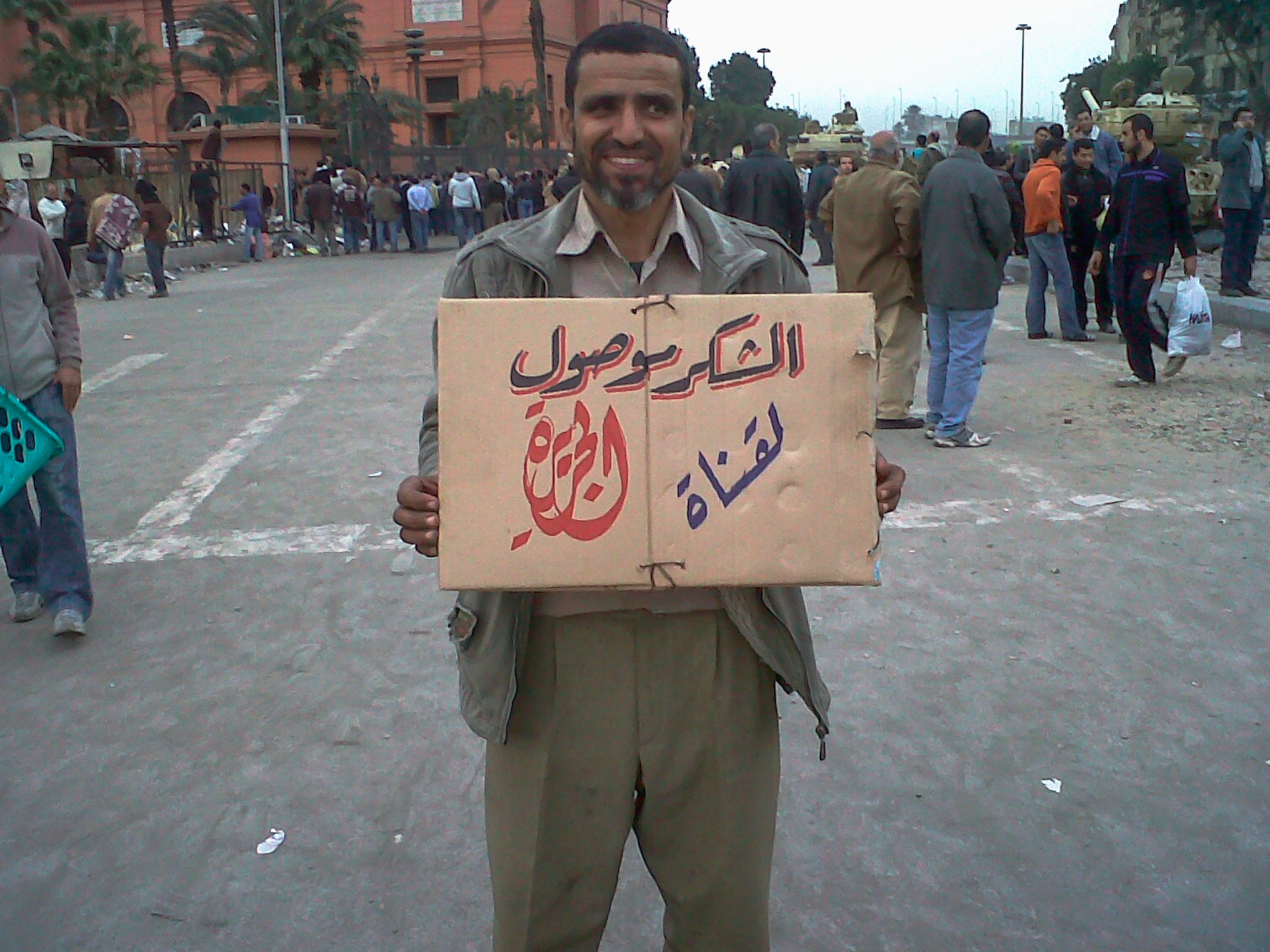 The target market are conservatives who feel alienated by CNN and MSNBC to their left and a Fox News now dominated by the white nationalist insanity of Tucker Carlson and Sean Hannity.

A not insignificant mooted constituency for Rightly is GOP-voting Muslim Americans, who have yet to find a US news media they can call their own.

The Guardian reports that the Al Jazeera English (AJE) staff are unhappy about the move.

They should be, and it’s not because there is something inherently illegitimate about the centre-right. The original Arabic-language channel, for example, is more right-wing than AJE.

The issue is that the network is wasting its resources on ideological branding when it could be investing more in reporting.

For US viewers, the importance of Al Jazeera became clear in the 2004 documentary Control Room, which followed Al Jazeera journalists covering the Iraq War, exploring issues of media bias, press freedom and the hazards of war reporting.

For American audiences especially, Al Jazeera English provided a vital alternative when many felt their sources of information were limited to foreign news media like the BBC and The Guardian.

There was a hunger for the real story in Iraq, Palestine and beyond, reported by locals.

But this hunger apparently wasn’t enough. There was the launch of Al Jazeera America (AJAM) in 2013, which not only focused on building a US audience but sought to apply its journalistic talent to economic inequality and political turmoil in the United States, treating the superpower as it might have covered, say, the Arab Spring.

Built on the foundations of Al Gore’s San Francisco-based Current TV, the network didn’t last long. But AJAM injected some much-needed new journalism into cable television coverage and served as a launching pad for a number of budding journalists.

Instead, we now see Al Jazeera trying the US market again, this time not counting on an audience’s hunger for news but following the time-tested strategy of building a network to match a political demographic.

As Tarek Cherkaoui at the Middle East Eye wrote – pushing aside staff concerns about the right turn – a split between Never-Trump Republicans and the former president’s loyalists “represents a window of opportunity for Al Jazeera to try its luck” and live up to the old journalism “motto of being ‘a voice for the voiceless’”, adding that “with more astute business acumen, this venture could well pay off”.

The mantra of being “a voice for the voiceless” means a commitment to telling the story of the dispossessed in a Dickensian sense, for those so far from the halls of power they need an intermediary to get their stories out, often victims of state neglect, corporate abuse or rampant crime, on the margins. Not conservatives now in the opposition.

This defence is also a bit rich when you consider that Middle East Eye’s own about page states that it “does not tailor our coverage for a specific audience” and aims to “bring local voices to the fore in analysis that isn’t shaped to suit political or financial agendas”.

That’s because the mission of journalism in a democracy is to inform its audiences and hold people in power, regardless of their political party, accountable. Instead, this shortsighted move will further atomize audiences in a cynical attempt to find a niche.

Even the name of this venture, Rightly – and of its hallmark show, Right Now  – has an air of insincerity, forcing the network to repeatedly state its centre-right credentials.

What could even sustain hours of such programming? There are conservative media forms that are informative – think of the American equivalent to the BBC’s HARDtalk, Firing Line, when it was hosted by National Review founder William F. Buckley.

But it’s worth pointing out that Firing Line has lived much of its life on the PBS (Public Broadcasting Service) network, best understood as down-the-middle politically, and always accused of liberal bias by the US right.

The best thing about the original Firing Line was that Buckley interviewed controversial figures who hardly agreed with him – Noam Chomsky and Black Panther Huey P. Newton, for example – on subjects that contain a high level of nuance.

And there are centre-right models abroad to look to today. The Economist and the Financial Times both believe market liberalisation is the best medicine for any problem.

Get past that editorial line and one finds some very good reporting. And, in the case of The Economist, often on places like Latin America and Sub-Saharan Africa, which get little attention in the US press.

However, this is because these outlets have newsgathering as a primary part of their identity.

Rightly is pitched to us first and foremost like a product of a focus group meant to capture a certain market demographic; actual journalism is an afterthought. That the platform is so far only available as a podcast and a YouTube channel is telling.

But here’s the problem: Al Jazeera America tried putting journalism first but, as the Columbia Journalism Review put it, it failed to get a big enough following in the cable news field.

There’s a variety of reasons for that, and one can’t ignore the intense Islamophobia the news organisation faces in the United States. Nevertheless, Al Jazeera learned a lesson about the American media market and Rightly is its attempt to get it right.

If US viewers can at least sympathise with its conservative politics, they won’t be as inclined to dismiss the network because it’s an Arab media.

Still, it feels like something is being lost here. Al Jazeera’s power over the last two decades hasn’t been that it features voices farther to the left than one is used to in the US and British press.

Rather, it is invested in investigative journalism and long-form magazine documentaries that tell deeper and richer stories, especially in the Middle East, where American and European audiences steadily became more focused after 9/11.

Al Jazeera English, according to Sam Cherribi — author of Fridays of Rage: Al Jazeera, the Arab Spring and Political Islam —  sought “the speed of CNN and the depth of the BBC, “with great shows like the Listening Post with the Canadian journalist Richard Gizbert, who holds a mirror to all media outlets by analyzing how they frame their stories and the ideology behind it.”

It has also boasted other in-depth reporting shows, like People & Power and the US-focused Fault Lines.

Al Jazeera’s journalism is by no means perfect. Cherribi explained to The Battleground, “The problem is the newscast and…reports from the field are coloured with Qatar’s interest of the moment.”

A state broadcaster, Al Jazeera is still a tool of public diplomacy. It’s just that its journalism can excel, particularly in English.

“Al Jazeera produces solid and often excellent news,” she told The Battleground. But it’s never been a down-the-middle network, “not when it leaned progressive with AJAM, nor now, with this effort at pandering to a fantasy of an American right.”

Abrahamian added that the unveiling of Rightly shouldn’t be surprising, because “the network is also financed by the sovereign wealth of a fundamentally conservative Gulf state”.

Or it could offer some much-needed demystification of financial and business news (an obvious interest of the centre-right), which far too often falls into CEO worship and stock market cheerleading.

But from the looks of it, Rightly appears as if its bosses in Doha are chasing a cheap media market dollar they couldn’t get when Al Jazeera America rose and fell.

All this will do is grant the centre-right a bigger microphone than it already has, which a Qatari media giant will make a little money off of.

Why Al Jazeera didn’t launch Rightly during the Trump presidency is a head-scratcher. Unveiling a platform for Republicans can’t be a hit at Biden’s White House.

Photograph courtesy of Mona. Published under a Creative Commons license.

Foucault once suggested that Clausewitz’s famous observation, “war is not merely a political act but a real political instrument” carried out by other means, be reversed, with politics made an extension of war. END_OF_DOCUMENT_TOKEN_TO_BE_REPLACED

Brexit will turn three on the last day of January, over six years since the 2016 referendum kickstarted Britain’s race to the bottom. END_OF_DOCUMENT_TOKEN_TO_BE_REPLACED

Be careful what you wish for. It may be a cliché, but it’s one the Greens are learning all over again. END_OF_DOCUMENT_TOKEN_TO_BE_REPLACED