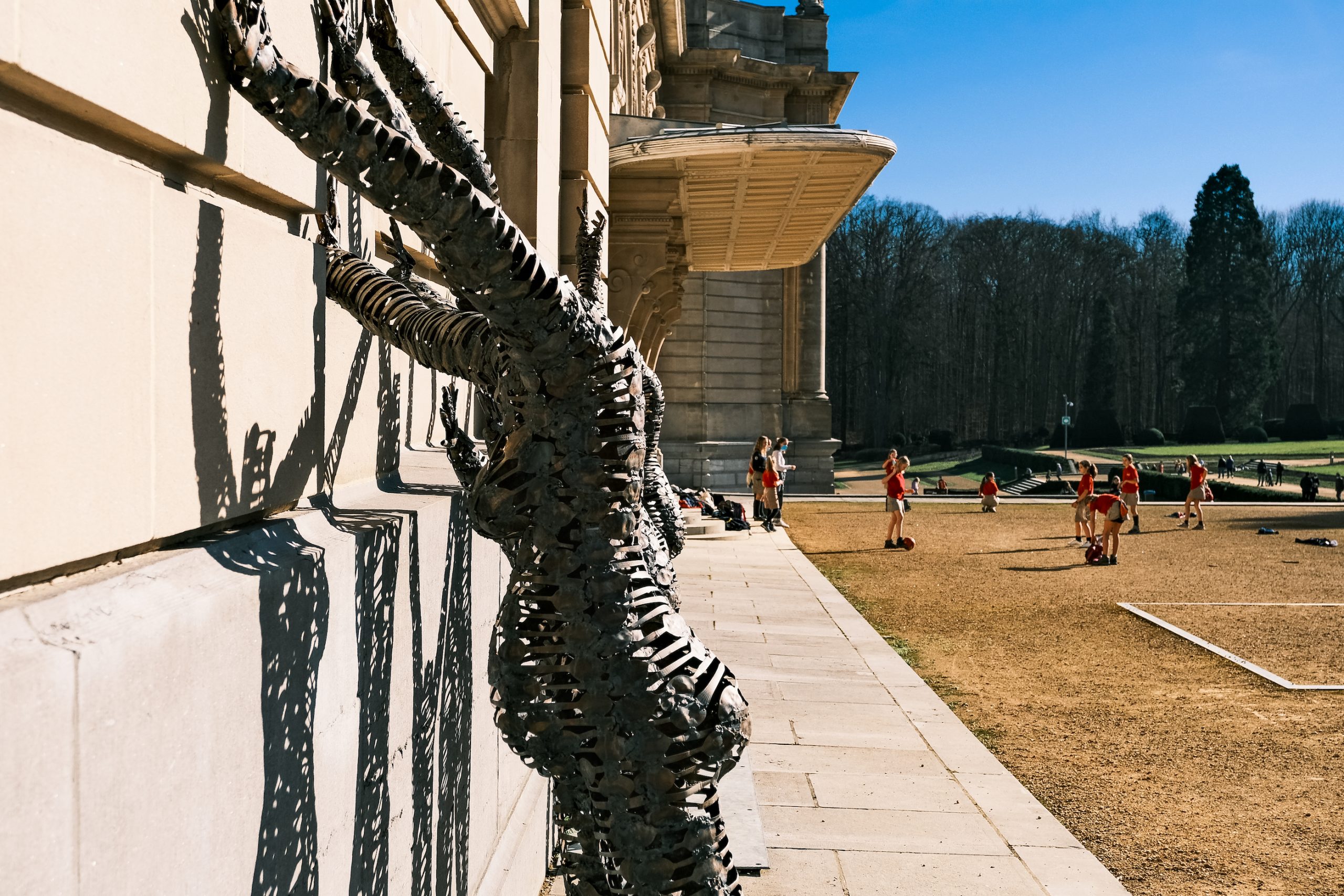 Against the wall, pregnant (Freddie Tsimba).

The British School in Tervuren seemed to fit the bill, especially as the kids did not speak any French or Dutch. So I arranged a few appointments and pitched up in Brussels for a one-day house search.

“Rendezvous at the elephant” was the surprising instruction from various estate agents. Sure enough, a larger-than-life statue of an elephant, with spear-carrying pygmies atop, greeted me as I walked from the tram stop towards the museum.

“If you are moving to Tervuren, you have to visit the African Museum,” an American who had lived in Brussels had told me. “It’s, er, interesting” was all he would say.

As I walked through the grounds of the museum and on through the adjacent park, it struck me as a lovely place to bring up kids. Plenty of open space to walk, cycle and get away from big city life.

When we finally moved over, there was a newly installed procession of life-size wooden elephants outside the museum, which intrigued children and adults alike.

When I found time to visit the museum, it was a bit disappointing.

That was until I spotted the slave manacles and other implements of oppression on open display. I began to see what my American colleague had meant.

The kids also visited the school, as part of their studies. When I ask what they remember of it, years later, they can’t recall much: “tribal masks, a tribal leader”, “the elephant mosquito”.

In fact, the history of the Royal Museum for Central Africa is well-known.

Originally named the Musée du Congo, it was built at the turn of the nineteenth century on land owned by King Leopold II and ‘intended to promote his colonial enterprises to the Belgian people… as a civilising mission’ according to the latest official guidebook.

What shocked me was a photograph of Congolese brought to live in the Colonial Palace grounds to create a ‘Human Zoo’ during the World Fair of 1897.

Several died and were buried near Tervuren church. Today, you won’t find any trace of that on the museum grounds. But you will find people picnicking and playing games alongside a monument depicting King Leopold, surrounded by African wildlife and proudly guarded by African warriors.

So when the Belgian Foreign Minister, Didier Reynders, announced at a diplomatic reception in 2018 that he was looking forward to inviting everyone to the opening of the renovated African Museum, it piqued my interest.

It would be another year before the museum was finished, and another year that saw the Black Lives Matter protests break out across the US and Europe.

Public statues of colonialists and those who profited from slavery were pulled down or defaced, including those of King Leopold II, who founded the museum on the back of resources viciously plundered from the Congo.

Emerging from the pandemic of 2020-21, the late winter sun in Tervuren Park reveals an arresting sight. Black figures can be seen from a distance prostrating themselves against the walls of the museum.

Sculpted by Congolese artist Freddy Tsimba to reflect his experience of stop-and-search in Belgium, the series ‘pays tribute to refugees, to those turned away at the border, and to victims of violence past and present’.

Placed against the walls of the Africa Museum, the figures evoke so much more.

Headless, with outstretched arms, men, pregnant women and children appear like zombies, come to reclaim their history and to remind us of Belgium’s bloody colonial history.

To give credit where it is due, the new Africa Museum is no longer glossing over its past.

In an attempt to set the record straight, there is an effort to put African culture, art and history at the centre of the story. It’s no longer told only from the perspective of European explorers whose names and maps are etched in the walls, but through the images, sounds and experiences of Africans then and now.

Inevitably it provokes as many questions as it answers.

Why partly veil the old statues rather than contrast them with modern sculptures? Why section off statues depicting slaves and colonialists in a small, Sculpture Depot?

Why not provide more space to confront and examine them? Why place the contemporary, African artist installations in a separate wing, rather than integrating them amongst the older exhibits?

As my Belgian colleague who accompanied me on this latest visit reflected, “It’s a beginning.”

Visiting the new museum doesn’t only raise questions. It evokes a feeling of unease, and other uncomfortable feelings like guilt, shame, embarrassment or perhaps even excuse and justification.

It feels like our collective past but somehow not us, at least not in our name. And yet it is the world our parents and grandparents inhabited, and we inherited.

European states with colonial histories such as Britain, Belgium, France,  and Germany still have difficulties acknowledging the past, and how it continues to influence the present.

As a case in point, the outcry over toppling British slave trader statues, revealing the colonial history of historic buildings, and calling out the racist record of former leaders is playing out right now for all the world to see.

It’s ugly and unsettling, but long overdue. And it’s an essential conversation to be having in understanding human rights issues, such as those highlighted by Black Lives Matter.

Educating ourselves about our colonial history is forcing us to confront our past, and challenge the present.

But the battle for our future is also playing out:  in our schools, in sport, in politics, in the media, on the streets, and in our homes.

While crowds gather for vigils in the UK and US for women killed by policemen, and women march in Australia against sexual assault going unpunished, can we really say that colonialism is in the past?

Isn’t it time to recognise legacies of colonialism – institutional racism and patriarchal power – still cast a long shadow over our lives?

Coming to terms with colonialism is a slow and sometimes painful process. But it is necessary to understand the world we live in and address the inherent injustices that remain to be overcome.

No European city knows the Nakba like Berlin. At least in my part of town, Neukölln. END_OF_DOCUMENT_TOKEN_TO_BE_REPLACED

The View From Torino

Ukraine is everywhere. Wherever you look, from newspapers to graffiti and TV, everyone is talking about it.
END_OF_DOCUMENT_TOKEN_TO_BE_REPLACED

Montenegro is a study in contrasts: a proudly traditional culture that adopts the latest technology and trends with ease; a rugged, mountainous topology that drops dramatically to the gentle Adriatic Sea via modern highways and old, winding roads; and a climate of baking dry heat in the summer, turning to cooling rain and snow-topped peaks in the winter.  END_OF_DOCUMENT_TOKEN_TO_BE_REPLACED