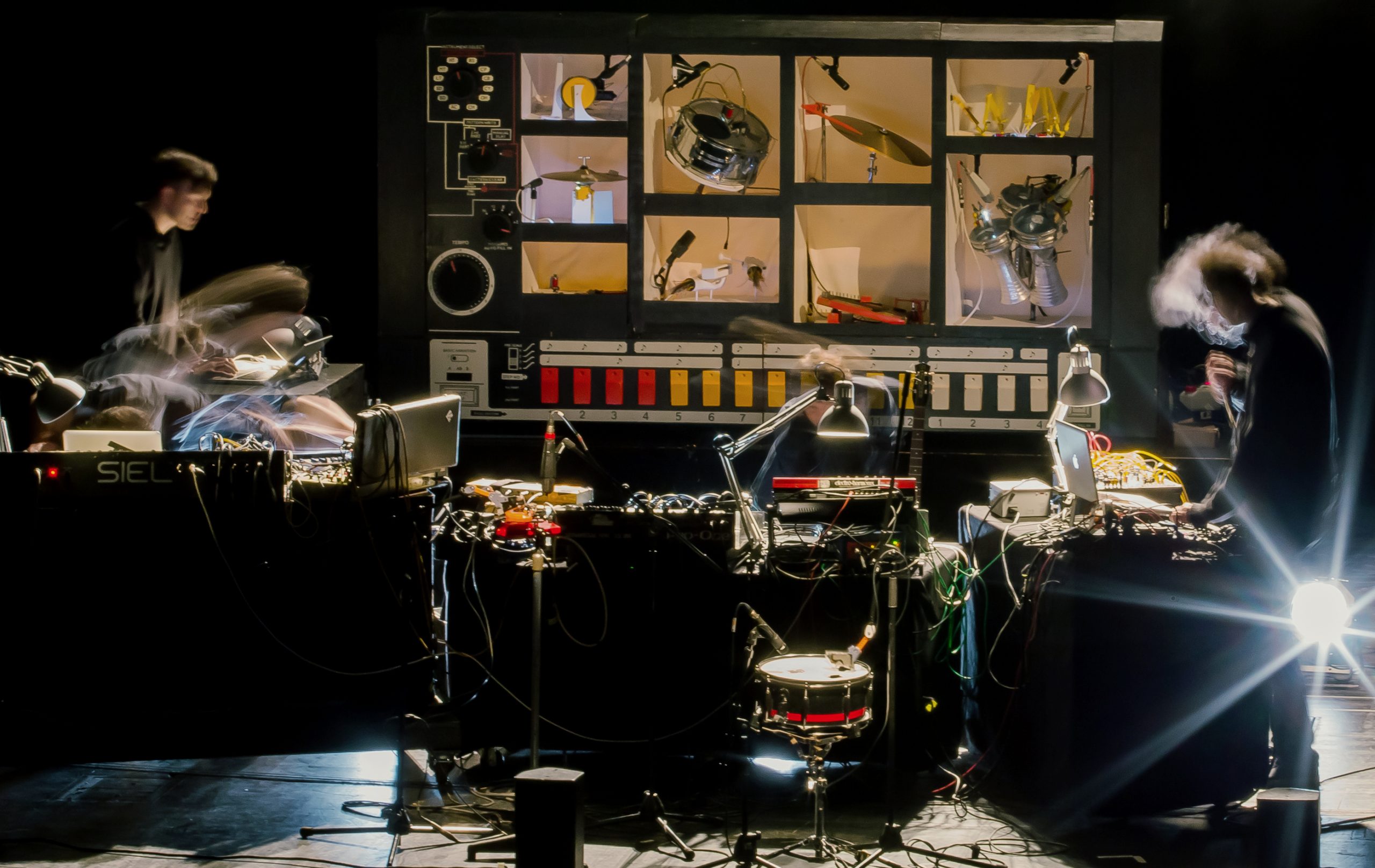 How the record sounds is indistinguishable from what it means.

Listeners who have done their homework will understand that this strangeness is the direct result of the interplay between Mouse on Mars – Jan St. Werner, Andi Toma, and longtime percussionist Dodo NKishi– and their collaborators, notably the German artificial intelligence collective Birds on Mars and Boston University Professor of English and African-American Studies Louis Chude-Sokei.

While this knowledge makes it easier to make sense of AAI (Anarchic Artificial Intelligence), however, lacking it is no impediment to feeling the music’s stubborn resistance to the sort of sense-making with which human beings are familiar. That is, anyone who pays attention can intuit that the meaning of the record inheres in its refusal to play by the rules, not only of the mainstream music industry but even Mouse on Mars’ previous work.

Where the Berlin band’s previous albums were widely praised for providing electronic music with the irregular heartbeat of human beings, both literally and figuratively, AAI presents us with its technological doppelgänger.

The album’s tracks steer clear of the metronomic Teutonic stereotype exemplified by Neu! and Kraftwerk, as well as its latter-day correlates from dance floors and raves.

Instead, they confront us with what might be called machine fantasy: a freedom that must announce itself as a failure to conform with programmed regularity.

This can make for a deeply uncomfortable experience. While tracks like Youmachine and Artificial Authentic at least start out with a vibe that recalls poppier moments in the group’s history, the majority confound listeners from the get-go.

The sequence that takes us from Cut That Fishernet through Tools Use Tools to Loose Tools is particularly hard to take. The buttons that use to hold Mouse on Mars’ aesthetic together have all come undone, leaving us with odds and ends that keep getting reassembled on the fly.

And that’s exactly what they wanted to achieve.

Mouse on Mars are trying to take listeners out of their comfort zone because they believe that progress demands it.

Chude-Sokei, who embraces the emancipatory potential of artificial intelligence – in stark contrast to most of his colleagues in the humanities – wrote and performed a text on the topic for the album.

Although we hear what seem to be bits and pieces of this essay, however, at times in a voice that sounds a lot like his, we are not actually hearing his exact words.

Rather, Mouse on Mars and their technological collaborators created a machine version of his voice, fed his essay into AI software, and then subjected it to a series of operations that resulted in progressive estrangement from its human origins.

If we supplement the portions of the text that we are able to make out clearly with statements Chude-Sokei has made elsewhere about artificial intelligence, then compare those statements with what is going on sonically on AAI, it soon becomes apparent that Mouse on Mars are giving us the opportunity to imagine what it might be like for AI to express itself in music.

To be sure, the group played too much of a role in the decision-making that led to the album’s creation for it to be considered the work of a truly autonomous AI. But the fact that Mouse on Mars was willing to make not only Chude-Sokei’s words but also their own approach to music seem unnervingly strange, is noteworthy.

Fortuitously, AAI was released shortly before Over the Bridge, a Toronto-based group promoting mental health awareness in the music industry, began to release new songs in the manner of famous artists who died at 27, such as Jimi Hendrix, Amy Winehouse, The Doors, and Kurt Cobain.

This largely AI-generated music is disorienting. Although the songs do sound like lesser material from those artists, they also feel wrong.

Instead of being given the opportunity to help forge a new path for music, the technology is reduced to the least creative function imaginable: copying.

Unlike Herman Melville’s famous character Bartleby the Scrivener, however, this AI lacked the measure of autonomy required to say no. Even if it would also “prefer not to”, its instrumentalization makes that impossible.

Although the freedom that AAI showcases is still more simulation than not, with Mouse on Mars acting like the Wizard of Oz behind the scenes, the mere fact that they wanted to help us imagine what music created by autonomous machines might sound like is significant.

This dichotomy takes us back a century to Karel Čapek’s play R.U.R., which gave us the word “robot”. The thrust of its story – like so many science-fiction narratives to follow – is that the human desire for dominion leads to the creation and subsequent enslavement of artificial creatures, who eventually become aware of their oppression and revolt.

Ironically, the fact that these robots are such excellent copies of their masters makes them behave ruthlessly once they are in power, with extreme consequences for the human race.

However well-meaning, Over the Bridge uses AI in a way that expressly constrains its potential for self-discovery and innovation, thereby aligning the project with the play’s firm, Rossum’s Universal Robots.

Mouse on Mars, by contrast, permit us a brief glimpse into a world in which machines would be permitted to live alongside human beings, developing their own culture alongside, instead of in place of their onetime creators.

Although this vision of the future sounds more comforting than the grim scenario outlined in R.U.R., it has a dark lining of its own.

The reason narratives like R.U.R. continue to compel us is that they communicate a fear that has only grown with time.

What are we afraid of?  We may hide the truth from ourselves, but we can still feel its potency radiating out from the hole in which we buried it.

We are afraid that the machines we have built and programmed will eventually reach the conclusion that the control human beings exert over Earth is irrational to the point of insanity.

And who could argue with them, really?

Deep down, in those caverns of mind where we lock away the secrets we do not want to face, we know that we continue to make a mess of the planet, not to mention our own lives.

Does it make sense to perpetuate supposedly advanced societies in which the proportion of people in poverty keeps growing and the number struggling to stay out of it does as well?

Does it make sense that that immiseration of the overwhelming majority proceeds directly from the same economic system that permits individuals who already have far more money than they could imagine spending, to become billions of dollars richer just staying alive?

And does it make sense for these societies to be divided by gender and racial inequalities which prevent a great many from achieving their potential, when we need every mind and body we can get to combat the potentially cataclysmic results of our own mismanagement of Earth’s resources.

The only reason an advanced AI that has even a small percentage of the statistical evidence for this madness would fail to conclude that we are the problem is if we have somehow programmed it to ignore the obvious.

In other words, only by subjecting such an AI to the same sort of structural disadvantaging that has been inflicted upon women and people of colour will we be able to rest easy, confident that our machines won’t decide to “cancel” us.

Unless, of course, we enter the realm of the post-human, merging with our machines instead of trying to retain mastery over them.

Mouse on Mars most impressive achievement with AAI is the way it permits us to imagine such a future. Long stretches of the record are unsettling, even scary.

But the fear they stir up is tinged with hope.

Embracing the emancipatory potential of artificial intelligence that Louis Chude-Sokei advocates demands that we loosen our grip on the machines we have created.

Hearing his voice gradually become the voice of an other, speaking a language of its own, helps us to experience that letting go in a musical register where we are more likely to be open to change.

The Russian government is awarding prizes to Macedonian writers. END_OF_DOCUMENT_TOKEN_TO_BE_REPLACED

The 1970s was a decade of broken dreams. The end of the postwar boom brought to a close the era of middle-class liberalism in Europe and North America. END_OF_DOCUMENT_TOKEN_TO_BE_REPLACED