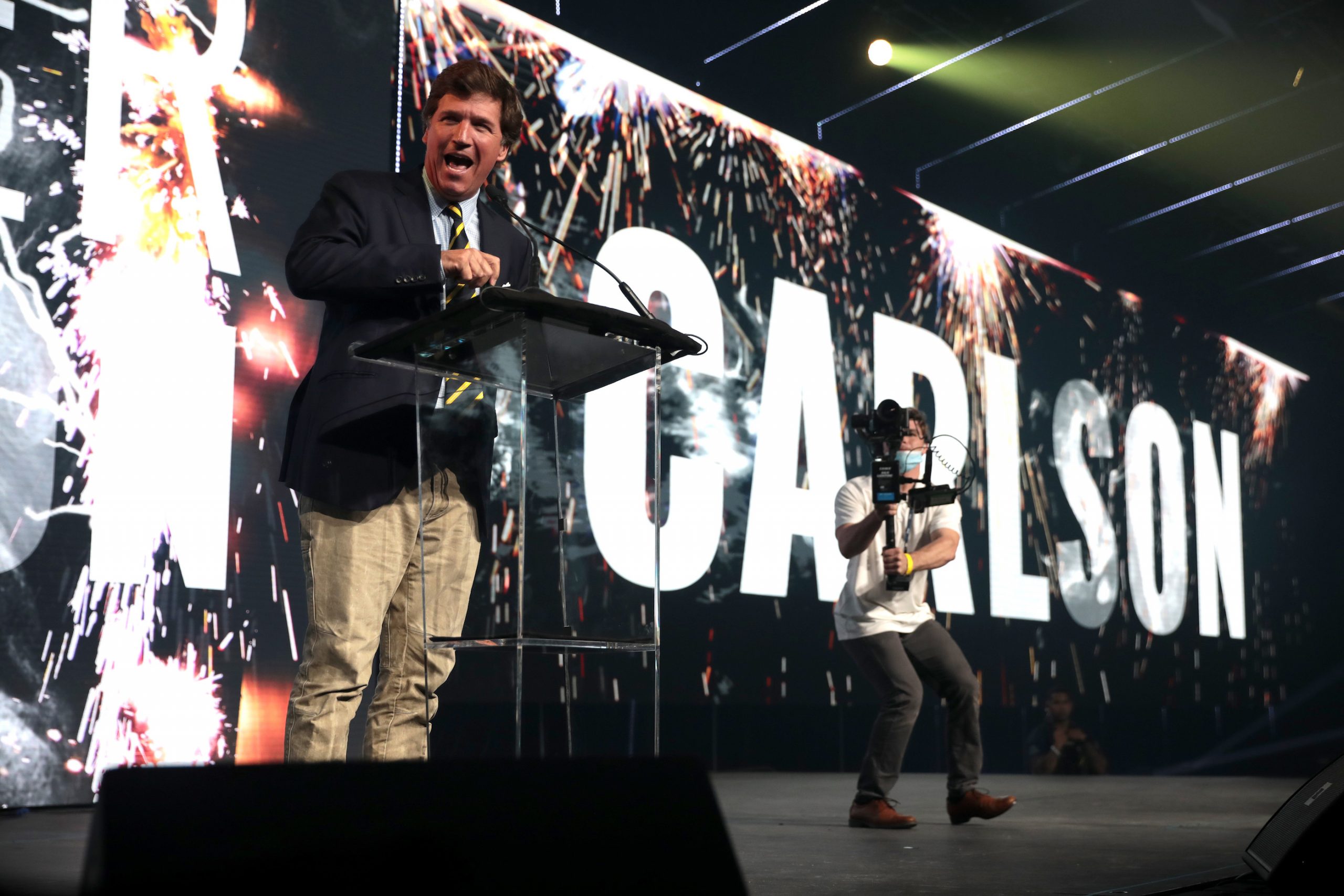 The Anti-Defamation League cited his invocation of the great replacement theory, the racist idea that non-white immigrants will soon “replace” white civilisation in the West.

Carlson couched his “argument in terms of what he described as the Democratic Party attempting to replace traditional voters with immigrants from third-world countries”, wrote ADL national director Jonathan A. Greenblatt in a letter to Fox News, adding that the host’s “rhetoric was not just a dog whistle to racists–it was a bullhorn”.

Tucker Carlson has previously dabbled in this theory, popularised by French white supremacist Renaud Camus, which holds that low birthrates among whites in the West along with high rates of immigration from the Global South will lead to a replacement of Occidental society.

What’s interesting about this idea, central to far-right extremists such as France’s Génération identitaire, and Marine Le Pen’s rebranded Front National, Rassemblement National, is that it consolidates so many of the right’s targets into one agenda.

Great replacement theory is in part a call for strict border enforcement and racist immigration limits. But it’s also a criticism of cultural liberalism and feminism, which adherents believe leads to low birthrates and the disintegration of the traditional Western family.

The American ADL is hardly an antidote to such politics. It often fights leftist activists and is quick to describe advocacy for Palestinian rights as “antisemitism”, going after Democratic lawmakers like Ilhan Omar and Rashida Tlaib.

This isn’t the first campaign to get Carlson’s show off the air, either. Moveon.org passed around a petition calling for his removal after he defended Kyle Rittenhouse, a 17-year-old who shot and killed two Black Lives Matter protesters in Kenosha, Wisconsin, as someone who “decided to maintain order when no one else would”.

Activists previously called for advertisers to boycott his show after Tucker Carlson claimed immigration made the United States “dirtier and dirtier”. While he did lose advertisers, he’s still here. Carlson has even received the wrath of the Pentagon for implying today’s military is no longer manly.

– According to the Southern Poverty Law Center, Tucker Carlson has repeated the myth of a “white genocide” a sort of cousin myth of the great replacement theory, that says multiculturalism is meant to eventually extinguish the white race.

– Carlson’s show has featured language extracted from “14 Words”, an American white supremacist slogan coined by The Order’s late ideologue Alan Lane, which says, “We must secure the existence of our people and a future for white children.”

-The top writer for Tucker Carlson’s show, Blake Neff, was forced to quit when his racist posts on social media were revealed.

Choice quotes include progressive lawmakers want to “make your country a dumping ground for people from Third World shitholes” and “once Democrats have the majorities to go full FUCK WHITEY, things are going to get really wacky really quickly”.

-Carlson has defended Representative Marjorie Taylor Greene, an adherent of the QAnon conspiracy theory, which is a reworking of the antisemitic Protocols of the Elders Zion myth.

Adding another layer to Carlson’s white supremacist problem, the Georgia Republican has gone on record, stating “Zionist supremacists (sic) has schemed to promote immigration and miscegenation, with the deliberate aim of breeding us out of our homelands.”

– Tucker Carlson asserted, without evidence, that the civil rights organisation NAACP was a “discredited” group, in response to its criticism of the racist record of former Attorney General Jeff Sessions.

-Tucker Carlson lost advertisers when he claimed “it was ‘soulless and craven’ to support” BLM, and ran a list of “celebrities who offered financial help to the cause in front of video of property set ablaze during the uprisings”.

-Carlson said that Representative Ilhan Omar, a lawmaker from Minnesota, who is also a hijab-wearing Muslim immigrant born in Somalia, is “a warning to the rest of us that we better change our immigration. Or else”. The group Muslims Advocates called for his ouster in response.

None of this has cramped Carlson’s success, as it remains one of the top-rated cable shows in the United States and even expanded Carlson’s presence with a new multi-year contract earlier this year. He’s a tough man to cancel.

The great replacement theory, and other proclamations that non-white immigration to predominately white countries poses a violent and existential threat to Western civilisation, has been implicated in numerous acts of violence in the United States.

A year prior, Tucker Carlson put the HIAS on the radar of the US far-right, aggressively questioning HIAS CEO Mark Hetfield on his show after protests erupted at airports in response to the Trump Administration’s ban on entry of travellers from certain Muslim countries.

Brenton Tarrant, the Australian terrorist who killed 51 Muslims in the Christchurch, New Zealand attack, was similarly radicalised by the great replacement theory, as was the El Paso shooter Patrick Crusius, who murdered 23 people, 8 of whom were Latinos.

Americans first learned of Camus’ theory during the August 2017 Unite the Right rally in Charlottesville, Virginia, when white supremacists were filmed chanting “Jews will not replace us” and President Trump refused to condemn them, saying ‘alt-left’ demonstrators were bad, too.

The great replacement theory didn’t appear out of nowhere. A longtime anxiety of the white nationalist right, different versions of it have circulated for several decades, in response to growing immigration to Europe and the United States from the Global South.

Anders Behring Breivik is a good example. The Norwegian nationalist, who killed nearly 80 people in 2011, was inspired in part by the far-right and anti-immigrant blog Gates of Vienna, according to Åsne Seierstad’s book One of Us: The Story of a Massacre in Norway–and Its Aftermath.

Breivik wasn’t inspired by the Camus theory directly, but that theory “fits hand in glove with the ‘Eurabia’ [idea]…Breivik was obsessed with,” Seierstad said, adding that “he wrapped his violence and his terror act in the theories that white Europeans would be extinct if we didn’t act against mass immigration and Islamisation”.

“There is code language, I don’t mean secret codes, but rather you say something within the mainstream context, but your listeners will know what you really mean, and the meaning is much darker. Both [Donald] Trump and Carlson use this tactic….

Some of the extremists, including some shooters, have said they have been directly inspired by Trump; the question is whether Carlson has the same commanding and inspiring power over his viewers. He definitely helps radicalise his viewers, but how far will they go?”

We certainly know Tucker Carlson is having some effect. Like the HIAS, journalists targeted on his show have reported being harassed as a result.

Reece Peck, author of Fox Populism: Branding Conservatism as Working Class, said that Carlson’s appeal to class anger falls in line with the paleoconservatism of Catholic radio preacher Charles Coughlin, who fused anti-banker populism with Antisemitism and red scare rhetoric in the 1930s.

“It’s a superficial form of anti-capitalism,” Peck said, one that is “very selective” and meant to present an “underdog narrative” for conservatives against liberal culture.

Tucker Carlson has some surprising defenders – such as The Intercept’s co-founder Glenn Greenwald, a frequent guest on the show – who say that talk show host offers refreshing economic populism in his message. But his common man agenda is nowhere to be found.

Carlson has bashed Medicare for All, teachers unions,  increasing taxes on the rich and raising the minimum wage nationwide. While his anti-immigration rhetoric is often couched in a desire to protect US jobs, evidence shows the idea that immigrants “steal” American jobs to be a myth.

Labelling Tucker Carlson is clearly a subjective matter. Certainly, a great many people who follow white nationalist movements have found the label fitting for a talk show host. Others might choose watered-down terms like nativist, cultural conservative or Eurocentric traditionalist.

Unsurprisingly, many conservatives recoil at the idea that the flagship news network of the American right promotes white supremacy.

Peck said that for right-wingers like Carlson, racial disharmony is “diagnosed as a cultural dysfunction,” an invocation of Daniel Patrick Moynihan’s report on Black poverty, “because they’re using the language of culture and not biological race”.

What isn’t so up for debate is the fact that Tucker Carlson is no longer a mere media personality standing outside politics looking in, but a public relations arm of the political movement that not only led to the election of Donald Trump in 2016 but an ongoing wave of right-wing violence, efforts to suppress the Black vote and opposition to immigration.

The Anti-Defamation League’s latest move against Carlson might seem futile against his ratings, but at this point, the talk show host is a soldier in a political movement that anyone devoted to racial justice has to fight against.

For Reece Peck, the liberal response to extremist speech has often been through technical regulation, such as Twitter’s banning Donald Trump. But he believes this route ignores the more important fight, which is to create something akin to conservative media, that can reach a mass audience with progressive politics.

Peck admits this is a big task. The experiment of Danny Goldberg’s Air America talk radio network (2004-2010), to counter right-wing broadcasters, completely flopped. On the television news side, MSNBC has become a Cold War throwback, with its obsession with Russian meddling.

But building a new alternative mass media ecosystem is still necessary, Reece Peck said, because “you can take Tucker off the air and bankrupt Fox News, but that audience is still going to be there…and some other outlet will fill the void”.

“The best thing to do is to match them,” Peck concluded.

Not every media organisation can bear criticism, even self-criticism, but others require it to keep going. END_OF_DOCUMENT_TOKEN_TO_BE_REPLACED

Foucault once suggested that Clausewitz’s famous observation, “war is not merely a political act but a real political instrument” carried out by other means, be reversed, with politics made an extension of war. END_OF_DOCUMENT_TOKEN_TO_BE_REPLACED

Brexit will turn three on the last day of January, over six years since the 2016 referendum kickstarted Britain’s race to the bottom. END_OF_DOCUMENT_TOKEN_TO_BE_REPLACED