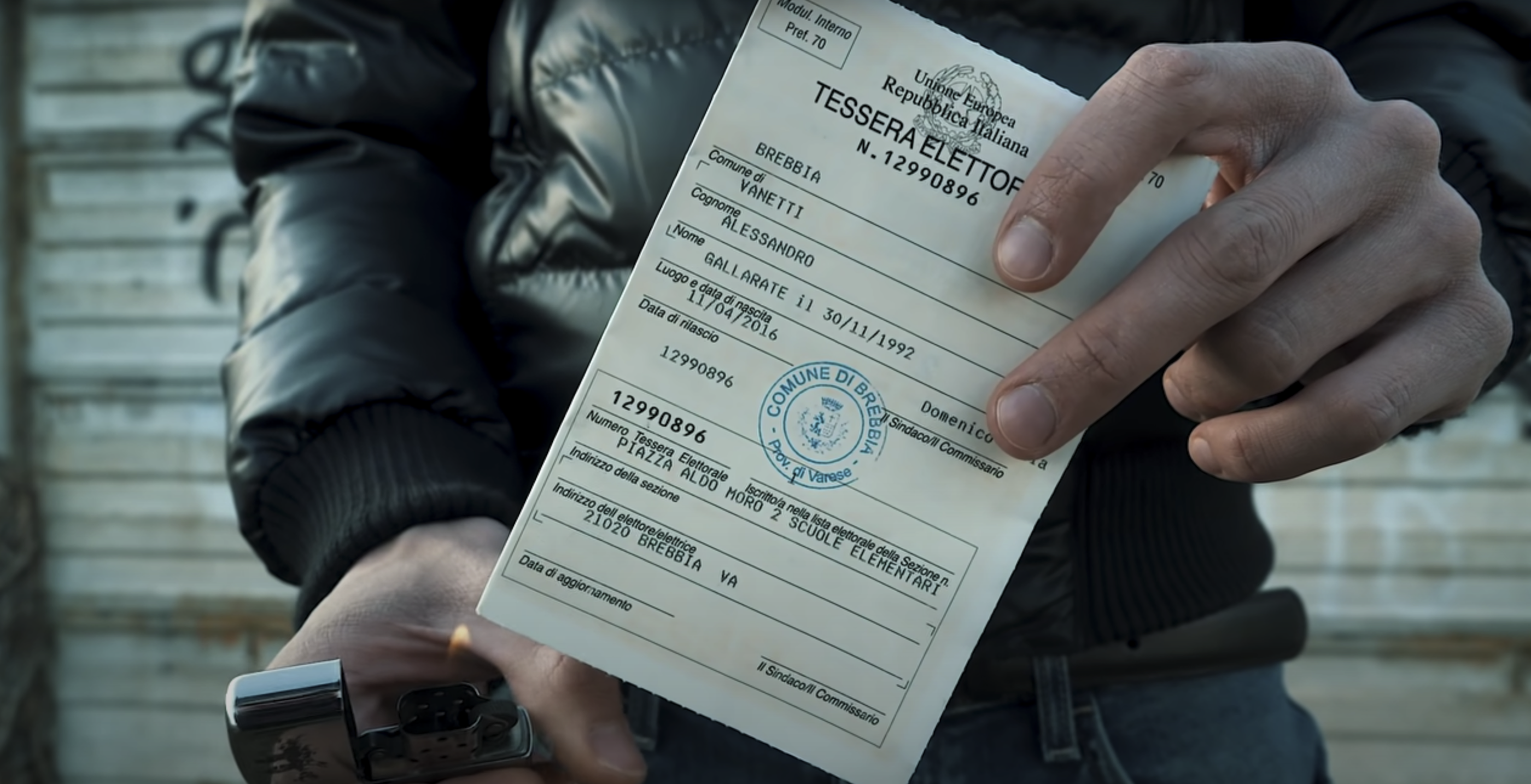 The twenty-eight-year-old Alessandro Vanetti avoids the sparsely worded, slurry voiced delivery that defines the now-global subgenre of trap. This is someone who cares too much about language to express himself so ambiguously.

While this makes Pericolo’s music less accessible to audiences outside of his home country, it hasn’t hurt him domestically. Indeed, Solo Tutto’s resistance to radio-friendly cosmopolitanism is one of the reasons it debuted at the top of the Italian charts.

This is not to say that the album is lacking in diversity.

Sai Solo Scopari almost has the feel of a Bollywood dance number. Bugie juxtaposes Massimo Pericolo’s rapid-fire delivery with a tripped out bed worthy of early ’70s Can.

Fumo begins with New Age piano arpeggios, and Beretta is a reminder that gangsta rap is still a part of the dialogue.

The constant is the stream of words Pericolo seems incapable of holding back. Even if he hadn’t declared his love for Eminem, the comparison would be impossible to avoid.

Whereas Eminem made his mark in a culture where his whiteness was constantly a problem, sometimes closing doors and frequently opening them, Pericolo has other things to worry about.

As Italy has become more multicultural – though much less so than Germany or France – overt examples of racism have greatly increased.

Despite the fantasies cultivated by ultras and their counterparts outside the world of sports, the superiority of whiteness can no longer be taken for granted.

Although this is has been the case in Italian popular music for a while now, particularly rap, Solo Tutto doesn’t need to perform the sort of labour that was required for Eminem to demonstrate his authenticity.

So long as Massimo Pericolo doesn’t make a case for being European, he will pass the test.

His earliest, Middle Eastern-conscious work strongly hints at such concerns, reflecting the strong Arab presence in Milan’s hip-hop scene. You might say that his Italy is the one that faces south and east, across the Mediterranean, rather than towards Brussels.

This orientation gives Pericolo the freedom to explore a wide range of feelings without regarding every song as a struggle for survival.

“Emodrill”, the term he coined to describe his music, succinctly captures his aesthetic. While his music cuts through the bullshit, the space it opens up can be filled with something other than rage.

For all of the familiar posturing that Pericolo did on his debut, 2019’s Scialla Semper and continues, at times, on Solo Tutto, these are not the sentiments of a person whose world is defined by war. It’s love or, to be more precise, the lack of it that has his attention, whether that of someone he misses – perhaps his friend Martina, who passed away in July of last year – or a mother who misses him.

Massimo Pericolo addressed this shift in approach when discussing the album, noting that his first album’s success has made it possible for him to experience a life he had never imagined actually being able to experience, even while he had clearly fantasized about it a great deal: “Sto vivendo qualcosa che non avrei mai immaginato e mi sento tutto il contrario di ciò che avrei immaginato immaginandolo.”

This is the domain of paradox, one which has lead him into a state of doubt and depression. At the same time, it is clear that, unlike so many working-class artists who have suddenly struck it rich, Pericolo has turned his insecurity to good use.

Although Solo Tutto is hardly a political album, at least in the conventional sense, its overt class consciousness testifies to the need for a political solution to the problems facing Italy, not to mention the rest of the developed world. Pericolo’s success provided him with an opportunity for reflection that far too many people are denied.

In a sense, it created a safety net, where he could feel things deeply without paying the price. For someone who spent two years in prison as a young adult, this constitutes a once-unfathomable luxury. Yet if even a small percentage of that luxury had been granted to him prior to the misdeeds that sent him to jail, he might never have gone astray in the first place.

That’s the theme of many American rap classics as well, though the frequent emphasis on material success tends to conceal it behind a dark veil.

Interestingly, though Eminem boasted about his prowess behind the mic and the punishment he was planning to dole out to his ex Kim, he largely avoided rapping about babes and bling. The Pericolo of Solo Tutto follows suit, creating a clear impression that what matters most cannot be converted into money.

Some may complain that Solo Tutto shows that he has gone soft. The truth, though, is that it arrives at a destination that is hard to reach, precisely because Pericolo puts his vulnerability front and centre, as though he has nothing to fear.

That’s not going soft, so much as a demonstration of strength. It’s not typical of rap, by a long shot, with its emphasis on boasting about sexual and financial success. But that’s what makes the record stand out.

By repurposing the emo tag from punk to describe his work, Pericolo signals that he wants it to be judged by a different standard. The tag has an appropriately deterritorialising effect, turning rap into something other than a platform for nouveau riche, lumpen men.

Punk is the last thing you’d expect to find as an influence here. But its political impact is loud and clear.

Korean-German philosopher Byung Chul-Han is the quintessential postmodern figure. Having to come to Germany to study metallurgy, he switched fields and mastered the argot of German philosophy. END_OF_DOCUMENT_TOKEN_TO_BE_REPLACED

François Truffaut’s  The 400 Blows is one of cinema’s all-time classics, the 1959 film that demonstrated how deftly a new generation of French critics could transform themselves into the filmmakers of la nouvelle vague. END_OF_DOCUMENT_TOKEN_TO_BE_REPLACED

Everyone has something to say about the violence at the 2022 Oscars, whose host called “the greatest night in the history of television”. END_OF_DOCUMENT_TOKEN_TO_BE_REPLACED