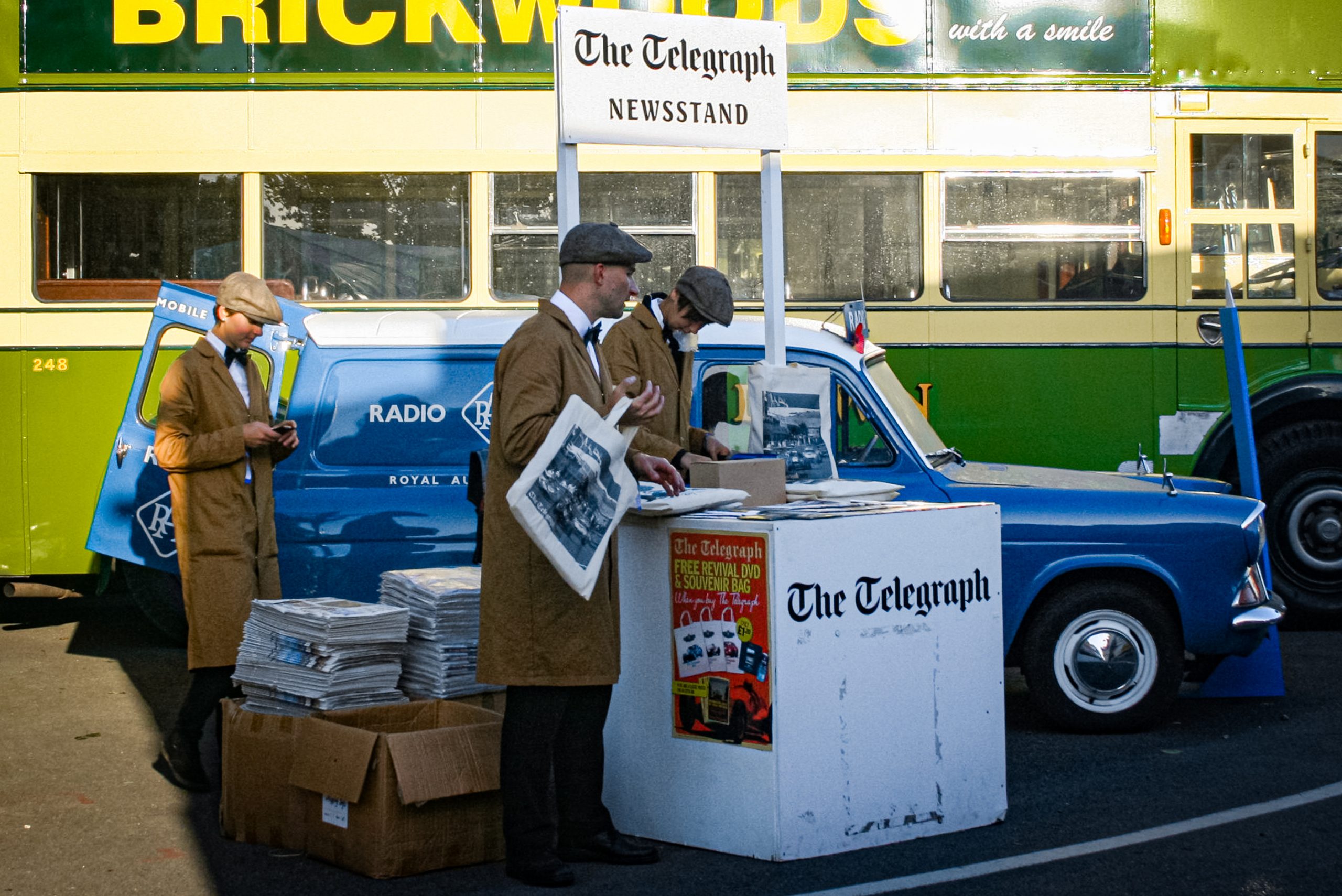 Little Britain loves the past. Pitching at pensioners, Chichester.

This may be the first time the paper has had a government it feels at home with for a long time. The Telegraph has long been the newspaper of choice for Tory voters, yet somehow the paper didn’t quite find its place during the May years or the Cameron era.

Unlike The Times, The Telegraph did not abandon the Conservative Party for New Labour. The newspaper stuck to its values and continued to support the nasty party through the wilderness years.

The Conservative establishment values loyalty above all else, despite its fratricidal tendencies. Few people have benefited from this more than Johnson. He has been rewarded at every turn thanks to his class status.

Starting out at The Times, Boris Johnson made a name for himself but was later fired for fabricating a quote. This is a cardinal sin in journalism. Most journalists would have trouble finding work ever again once they had been exposed as faking quotes. But not Boris.

Instead, The Telegraph hired Johnson and injected him into Brussels to cover European affairs. He soon made an impression. Johnson helped pioneer a sensationalist form of right-wing Eurosceptic coverage.

Telegraph editor Max Hastings had a good time trying to keep Johnson on track. “I would not trust him with my wife nor – from painful experience – my wallet,” wrote Hastings years later.

“His chaotic public persona is not an act – he is, indeed, manically disorganised about everything except his own image management,” he claimed. “He is also a far more ruthless, and frankly nastier, figure than the public appreciates.”

Nevertheless, Hastings kept promoting Johnson. He had the foresight to not send off the Etonian scruff to cover wars, but he did put Johnson in charge of UK political coverage. He no doubt regrets it nearly 30 years after he made the decision.

In short, whether Hastings likes it or not, The Telegraph helped set Johnson on a scenic route to power. And Johnson helped tip the balance in favour of Euroscepticism.

The Telegraph may be unfalteringly loyal to the Conservative Party, but the paper has changed with the times. Euroscepticism was an innovation of the last three decades or so. Most Tory papers were pro-European in the 1970s and most of the 1980s.

What changed? In the early 1990s, The Telegraph followed its middle-class readership over the party machine during the Tory infighting over the Maastricht Treaty. This was a turning point in right-wing circles in Britain.

Long before Maastricht, the Conservative establishment was all for joining the European Community. Even Margaret Thatcher, now an idol to Eurosceptics, supported the Yes campaign in 1975 and implemented the Single European Act.

The European single market owes a lot to the Thatcher government. The radical free-market right saw an opportunity in European integration: the possibility of outflanking trade unions and public opinion through supra-national institutions.

This is why a young Friedrich Hayek was for a common European currency. He later came to oppose it, just like Thatcher who came to view the European Community as another ‘socialist threat’.

By the time Boris Johnson came to Brussels as a journalist, the British right was in a very different phase. The Conservative Party was divided over the European question and the infighting would help break the Major government.

Johnson himself played his part well. However, friends and observers like Tory MP Nicholas Soames maintain Johnson was never a believing Leaver. He dithered and slunk away from the in/out question – until he could capitalise on it in 2016.

The Cameron government wanted advance knowledge of Johnson’s campaign choice. He had sat on the fence for years, and, when he finally decided to back Leave, he texted his old schoolyard chum David Cameron just five minutes before he addressed the press.

The Cameron-Osborne wing of the Conservative establishment was left in shock, while Johnson went off with the nationalist subset of the Tory establishment. Much like a shark, he could smell blood.

By this time, The Telegraph was backing the Leave campaign. Johnson’s old employer was ready for his reign to begin before he was.

The newspaper, its readers, had been waiting for a person who would take the Eurosceptic cause into the heart of government. They had finally found their man.

So it was only natural that The Telegraph would become the organ for the Johnson era. The newspaper pivoted away from small ‘c’ conservative Tory ideas to pro-Brexit populism to keep up with the government and its readers.

This was another way to resell the same economic agenda. The Telegraph, like Tory backbenchers, are grateful to Boris Johnson for saving the party in 2019. However, the cracks are starting to show.

Many Telegraph readers are tired and angry with lockdowns in the midst of the COVID-19 pandemic. At the same time, the Tory base is not entirely convinced Brexit has been delivered properly and the same elements see Johnson as a ‘fake conservative’.

They aren’t wrong either. Johnson is a chameleon. He presented himself as a libertarian critic of Blairism in the 2000s, then he became a socially liberal One Nation Tory as London mayor before his transformation into chief Brexiteer.

After resigning from The Telegraph, Peter Oborne described the paper as “the most important conservative-leaning newspaper in Britain”. He wasn’t wrong. Opening the paper is a reliable barometer for Tory opinion at any given time.

The Telegraph may have to choose, once again, between the Tory establishment and the conservative middle-class people who buy it. Yet the readership has narrowed over the years.

Most of the paper’s content is kept behind a paywall for subscribers. This may have helped shrink its reach beyond the core readership. However, the result is a more concentrated and more direct relationship with its audience.

As much as The Telegraph has changed, the newspaper still serves to circulate and rearticulate Conservative opinion. This is why the paper represents a slice of Tory voters and members rather than the public as a whole.

The Conservative Party can turn to The Telegraph when it wants to get a sense of what its supporters think or even to address them directly. So the role of the paper hasn’t changed as much as the kind of government it supports.

The UK is now in the hands of a man with few scruples, few restraints and even fewer ideas. Johnson believes in nothing but himself. And The Telegraph is wedded to his ambitions for personal glory above all else.

Foucault once suggested that Clausewitz’s famous observation, “war is not merely a political act but a real political instrument” carried out by other means, be reversed, with politics made an extension of war. END_OF_DOCUMENT_TOKEN_TO_BE_REPLACED

Brexit will turn three on the last day of January, over six years since the 2016 referendum kickstarted Britain’s race to the bottom. END_OF_DOCUMENT_TOKEN_TO_BE_REPLACED

Be careful what you wish for. It may be a cliché, but it’s one the Greens are learning all over again. END_OF_DOCUMENT_TOKEN_TO_BE_REPLACED