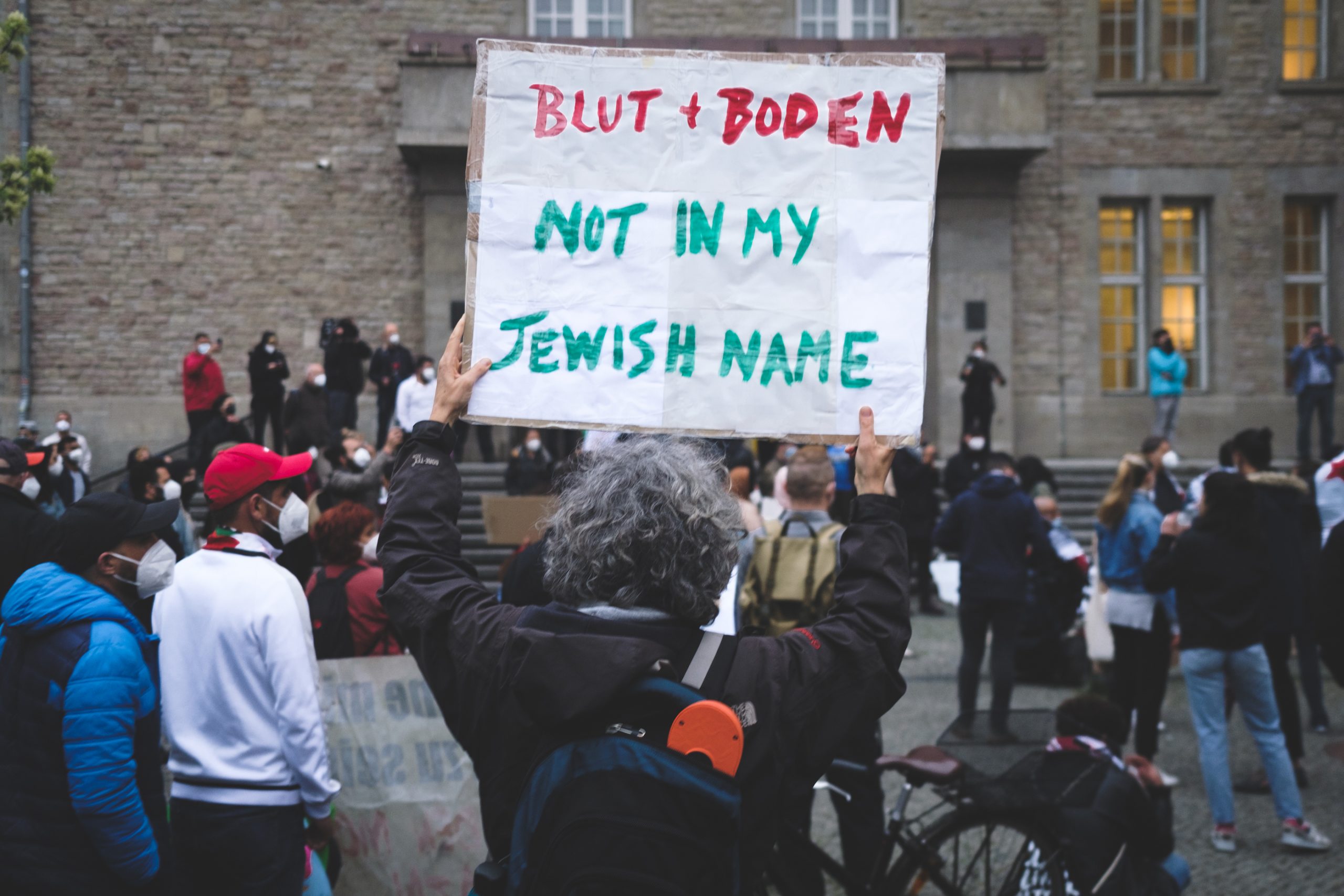 Protest against Jerusalem violence. Berlin, 12 May.

In the birthplace of the Nazi genocide, it’s standard practice to condemn such events and even slander their participants, within mainstream politics.

Local authorities often try to prevent them either with direct reference to the anti-BDS (Boycott, Divestment, Sanctions) resolution of 2019, even though it has no legal standing and has been classified by the German parliament’s panel of expert advisors as a mere ‘expression of opinion’, or by withdrawing allocated spaces at the last minute for vague or dubious reasons.

When the organisation Jüdische Stimme (Jewish Voice for a Just Peace in the Middle East), which openly supports BDS, was awarded the Göttingen Peace Prize in 2019, the location for the prize ceremony had to be changed after the university, which normally hosts the annual event, gave in to pressure from the city’s mayor and cancelled it.

This had been preceded by an attempt by a variety of individuals and groups, including the Zentralrat der Juden (Central Council of Jews), the unofficial representative body of Germany’s Jewish community, to make the jury change its decision.

The Göttingen Peace Prize jury stood firm but could not prevent the university from withholding its facilities, so an alternative location had to be – and was – found.

Because the principle that BDS is Antisemitic has established itself as an unquestioned fact in many areas of German culture and politics, it was no surprise that there was a degree of protest when the prizewinner was announced.

It was notable, however, that it made no difference to this assessment that this was a Jewish organisation.

While the Zentralrat expressed its disapproval as a Jewish body, it has also become quite commonplace for non-Jews to condemn Jews who criticise Israeli government policies in the name of protecting “Jewish life”.

Though the council and its allies are politically conservative, the last ten years have seen an increasing spread of this pro-Israeli government and anti-BDS attitude on the German left.

Die Linke (The Left), Germany’s leftmost parliamentary party, which has an anti-militarist and anti-imperialist agenda, is internally divided on the Israel-Palestine issue.

This was demonstrated most recently – during the eleven-day Israel-Hamas war in May, which followed violence by marauding gangs of right-wing extremists and security forces in Jerusalem – in a statement made by the co-chair of the party’s parliamentary group, Dietmar Bartsch.

Bartsch said that while he was generally against arms exports, he felt it was Germany’s responsibility to make an exception for Israel, defending exports including Dolphin submarines; these can be used to fire Popeye cruise missiles, which are believed to be nuclear-capable.

This was not Bartsch’s first demonstration of such inclinations. In 2018, while Gazans were protesting their captivity in the Great March of Return, the lawmaker travelled with a delegation to Kibbutz Safa, near the ‘border’, to plant trees protecting the area from incendiary balloons launched from the Strip.

While over 250 Palestinians were being shot dead and over 29,000 injured – which in many cases meant blinded or maimed for life – one of the leaders of Die Linke was showing support not for the victims of this violence, but only for the people living on the other side of the fence.

Though Bartsch belongs to a generation traditionally supportive of Israel (though this was less the case in the GDR, where Bartsch was born), this bias is also found among the young intersectional left, where support for anti-racism or trans rights is taken for granted, yet Palestinians are exempted from solidarity because they are seen as enemies of Jewish self-determination.

In May this year, this conflict could be observed in connection with several pro-Palestinian events. In Berlin, the culture festival Offenes Neukölln (Open Neukölln), named after a district in the city with large Palestinian and Israeli communities and sponsored by a range of groups and institutions, took place in the first week of June.

Offenes Neukölln was originally meant to include an event hosted by Die Linke Internationals, a working group within the party consisting of non-German members, in discussion with representatives of Jüdische Stimme and Palästina Spricht (Palestine Speaks), a Palestinian-background advocacy organisation.

The event was originally called “Cancel Palestine”, alluding to the frequent fate of events that espouse Palestinian rights or simply present the history and daily realities of Palestinians.

Noting that it was not listed in the online programme, we – I was involved as the representative of Jüdische Stimme– asked the organisers the reason for this.

They expressed their discomfort with the name and the description, which related to the stifling of speech on Palestine, fearing that it evoked associations with right-wing “cancel culture” discourse.

The title was changed to “Palestine: Limits and Possibilities of the Discourse” and the description was slightly softened.

After a little more dithering and stalling, the organisers finally informed us that they had decided not to feature the event.

In their statement, which they also released publicly, Offenes Neukölln said that their team had been unable to reach a unanimous decision, with some members supporting and others opposing the event’s inclusion.

Some of the latter feared that “Antisemitic statements” might be made during the discussion – despite the participation of a Jewish group.

At the same time, the statement openly revealed the organising committee’s helplessness in the face of a thorny issue, not least because of the lack of Palestinian or Jewish members in their ranks.

While this had no bearing on whether the event could take place, the planned venue also cancelled at short notice.

It did so reluctantly, but the Berlin Senate had adopted the content of the anti-BDS resolution and threatened not to renew the club’s funding contract if they hosted us.

Deutsche Welle forces its journalists to abandon terms like Apartheid, Colonialism, ethnic cleansing and illegal settlements when referring to Israel in their reports. @denijeg pic.twitter.com/hUzJ81uJaC

Fortunately, Die Linke’s Neukölln branch helped out at the last minute and provided its own premises, enabling the event to proceed.

It would be an exaggeration to speak of disappointment, as the course of events was fairly predictable and we were surprised not to have encountered pushback earlier on.

But it was pleasing to see expressions of support: an Armenian group cancelled their participation in solidarity and released a statement decrying the exclusion.

The anti-racist group Kein Generalverdacht (No General Suspicion) likewise attacked the decision and brought it up during their own event.

Then the German branch of the longstanding New Israel Fund, an organisation sufficiently progressive to draw the hatred of Israeli right-wingers but just moderate enough to be respectable in Europe, pulled out of a Green Party event on Antisemitism in protest.

It was a particularly potent gesture that highlighted the grotesqueness of uninviting a Jewish organisation and justifying this with insinuations of Antisemitism, whether on the part of Jüdische Stimme or of Palestinians who would dare to speak of their own experiences.

The accompanying statement warned of an increasingly narrow discourse and a “rhetoric of suspicion” with regard to Israel-Palestine in Germany.

In their closing words of thanks, the organisers of Offenes Neukölln referred to the many critical messages it had received on account of cancelling the Palestine event, promising that there would be some form of reflection after the festival on the decision-making process and future consequences.

It remains to be seen whether these consequences will be meaningful and more accommodating towards the Palestinian cause. But a different incident around the same time that initially unfolded in a similar way, yet found a rather different conclusion, offered a rare glimmer of hope.

The Freiburg festival “Dear White People” – Let’s Break the Silence!, taking place in the second week of June, is a week-long series of workshops, discussions and cultural events focused on racism.

The organisers had invited the Freiburg chapter of Palästina Spricht to take part, with an event on anti-Palestinian racism.

Following an internal dispute that culminated in sponsors and partners threatening to withdraw funding based on unfounded accusations of Antisemitism against the group, the festival cancelled the event. So far, so familiar.

Figures like antisemitism commissioner Klein have been so focused on tackling criticism of Israel from the left, including the Jewish left, that they have barely noted the acute danger Jews in Germany face due to the surge in far-right antisemitism.https://t.co/SP6Ui1HfPx

The organisers were clearly uncomfortable with their decision, as they decided to hold a public discussion about the issue as a form of compensation.

After a festival devoted to breaking the silence about the exclusion of minority groups had silenced and excluded a group called Palästina Spricht, they evidently thought they could make up for their decision by inviting others to speak about those who had been excluded.

One of those invited was Inna Michaeli, an Israeli board member of Jüdische Stimme. In her response to the request, she respectfully but firmly pointed out the paternalism and hypocrisy of inviting her and others to speak after excluding a Palestinian anti-colonial group.

Naturally, our members are familiar with such situations, and we understand the unwillingness to jeopardise an entire festival based on months of planning. But whoever talks the talk in matters of anti-racism and anti-marginalisation must also walk the walk – which means having the courage to stand up to anti-Palestinian bullying.

This response was joined by others in the anti-racist scene. To the festival’s credit, they decided to listen, even at the risk of losing funding, and released a statement in which they expressed regret for their actions, which they accurately described as “reproducing anti-Palestinian racism”.

The festival organisers said they would re-invite Palästina Spricht Freiburg (which they did) and expressed their displeasure with the sponsors and partners who had bullied them, voicing the hope that other participants would be willing to reduce their fees in order to compensate for possible funding shortfalls.

What do we learn from these events? Sadly, hostility towards Palestine solidarity continues to be strong not only in the German mainstream but also on the left. And whatever discursive privilege Jews might have in the Antisemitism debate is very selectively apportioned.

Palestinians are suspected of Antisemitic attitudes as a matter of course, and many institutions have accepted an automatisation of the discourse whereby positions such as ours are excluded without any discussion (witness the Berlin Senate’s behaviour).

At the same time, processes of erosion are evident. The Dear White People festival, which admittedly had less of an anti-Palestinian stance than other anti-racist events, reacted with integrity to grassroots pressure.

The festival acknowledged that there is more than one Jewish perspective and showed that sponsor blackmail need not always succeed, setting an important precedent.

Though this did not happen in the case of Offenes Neukölln, the pushback resulting from the cancellation of the Palestine event there clearly made an impression on the organisers.

In addition, Germany’s large Palestinian, Arab and Muslim population is making it increasingly difficult for overly “white” approaches to go unchallenged, as evident from the thousands of protesters who took to the streets during the May war.

While these were met with predictable accusations of Antisemitism, and a small number of genuinely Judeophobic incidents – some triggered by Turkish nationalists – were inflated to the point of overshadowing the greater number of peaceful protests, the reality was decidedly different.

Attempts to constantly tilt the narrative of the Israeli-Palestinian conflict towards an alleged Israeli side are growing more extreme because it is hard to justify them in such a context, and because, ironically, they also end up discriminating against Jewish opinions about the crisis.

As a member of a Jewish peace organisation, as frustrating as this all is, there’s gratification in remaining steadfast under such circumstances. Slowly, the narrative is shifting. It’s just a matter of staying the course.

Once again, the UK finds itself at a dilemma over Northern Ireland. END_OF_DOCUMENT_TOKEN_TO_BE_REPLACED

It’s been one horror story after another. Since Vladimir Putin first invaded Ukraine, the press has been deluged with reports of raw materials shortages and Europe’s reliance on Russian energy imports. END_OF_DOCUMENT_TOKEN_TO_BE_REPLACED