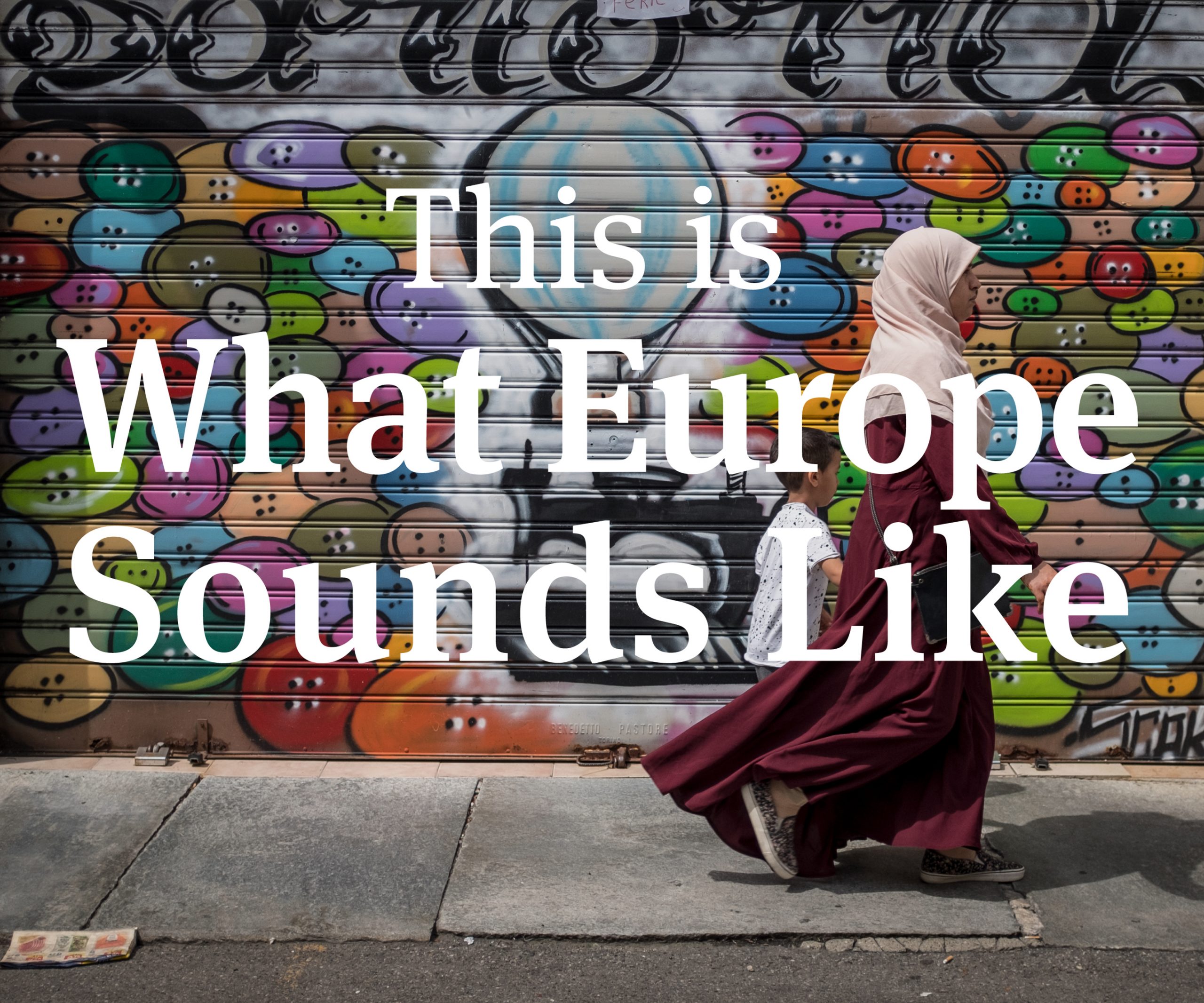 Even when we hear people making it, as when members of the continent’s long-persecuted Roma community perform on the Milano metro, our attention is directed elsewhere, to the way they seek to overcome the indifference of passersby.

Such labour is a central theme of these field recordings, recorded by The Battleground’s Joel Schalit over the past twelve years. A protest by steelworkers in Brussels, a celebration held to open a new falafel joint in Berlin, massed horns at a political demonstration in Torino: all cry out for recognition.

This is What Europe Sounds Like documents a very different place from the one promoted in advertising. This is what most people who profit from the travel industry wish Europe did not sound like, because it threatens to undermine deeply rooted fantasies of a land where history has been transformed into a tourist attraction

They would prefer that the continent’s disgruntled blue-collar workers and desperate refugees recede into the background, like servants at a cocktail party who proffer drinks and hors d’oeuvres without attracting notice.

These are the sounds, in short, that we are supposed to tune out. But Schalit’s collection flips the script, encouraging us to turn up the volume. And Raz Mesinai’s production transports us to the scene, bringing out a level of auditory detail that somebody who had actually been there in person would have been hard-pressed to notice.

This is what makes This is What Europe Sounds Like uneasy listening. These are the sounds we have been trained not to register. But confronting them like this makes it impossible to forget the plaintive exertions of Europe’s forgotten people.

The keening pleas of a woman begging for food in Torino, excruciatingly painful to hear, stand in metonymically for the entire project. Even though we might want to tune her out, we must acknowledge her humanity.

Sound is better suited to this task than sight and harder to ignore. Even though we are trained to turn unpleasant stimuli down in our mental mix, they linger as noise that is very hard to banish completely.

It’s different with images. Anyone with a decent mobile phone these days has easy access to a broad range of tools for editing images. If something within the frame doesn’t fit our conception of how the picture should look, we can crop, skew, improve, or remove it.

We can even change the way we look to match our fantasies. Nose too broad? Make it thinner. Cheekbones too weak? Make them more pronounced. Eyes the wrong shape or colour? They can be remade as well.

Modifications like these provoke the scorn of purists, who regard them as a deliberate attempt to deceive. Unfortunately, critiquing the impulse to edit in this way can easily turn into a sweeping condemnation of any and all attempts as self-transformation.

In the years ahead, as technological advances make it as easy to edit genes as it currently is to edit pixels, the ethical questions posed by the move to idealise will become more pressing. For now, though, a good rule of thumb seems to be that, so long as the edit somebody makes does not harm anyone else, they should be permitted to make whatever changes they like.

Where things get complicated, though, is in the determination of harm. Someone who passes off a highly idealised image of themselves as an accurate depiction of how they look in real life can cause significant damage to impressionable young people. So does editing distinctive racial and ethnic traits down to the point where they are barely discernible.

But this type of editing is only part of the problem. People don’t just edit themselves, they also edit their surroundings, eliminating extraneous and potentially unpleasant details from the background in order to idealise the space in which they appear.

One hard lesson that was given during the remote teleconferencing of the pandemic is that people will notice things that you have learned not to see. And they will draw conclusions about you based upon their sense of how your background reflects your interests and relative cleanliness.

As soon as you become aware of this fact, however, it becomes relatively easy to correct the problem. The camera only sees what falls inside the frame. With sound, however, the potential scope of interference is vastly larger.

That’s why field recordings like the ones in This is What Europe Sounds Like have so much potential to instruct. Someone walking near the place in Torino where the woman was begging for food could have easily looked away, editing her presence out of the visual field. The exertion required to silence her cries, by contrast, would have been much more intense. And both the labour itself and the sound on which it was expended would have left traces.

Because it is harder to edit sounds out of our experience and, as a consequence, our memories, recordings that document a particular place and time have the power, not only to make us aware of realities we have not witnessed personally but to help us reconnect with experiences that we didn’t fully register while they were happening.

The fact that audio recordings capture far more of their surroundings than their video equivalents – think of the wind sounds that intrude on your own home movies – means that they hold greater potential for unlocking these doors of perception.

When curated with care, as in This is What Europe Sounds Like, they contribute powerfully to the sort of ideological demystification that is becoming increasingly hard to come by.

As new technology makes it easier to avoid what we do not wish to see, it is all the more important to use it to record what we need to hear.

As I made my way up the trail, the late-afternoon sun temporarily muted by clouds, I suddenly realised how strange my situation was. END_OF_DOCUMENT_TOKEN_TO_BE_REPLACED

One of the great ironies of today’s politics is that when it comes to fascism, it’s often difficult to know what one is talking about. END_OF_DOCUMENT_TOKEN_TO_BE_REPLACED

This year marks the 30th anniversary of the death of Francis Bacon, the English artist whose life and radical painting during the second half of the 20th century continues to throw up new revelations and blockbuster exhibitions. END_OF_DOCUMENT_TOKEN_TO_BE_REPLACED