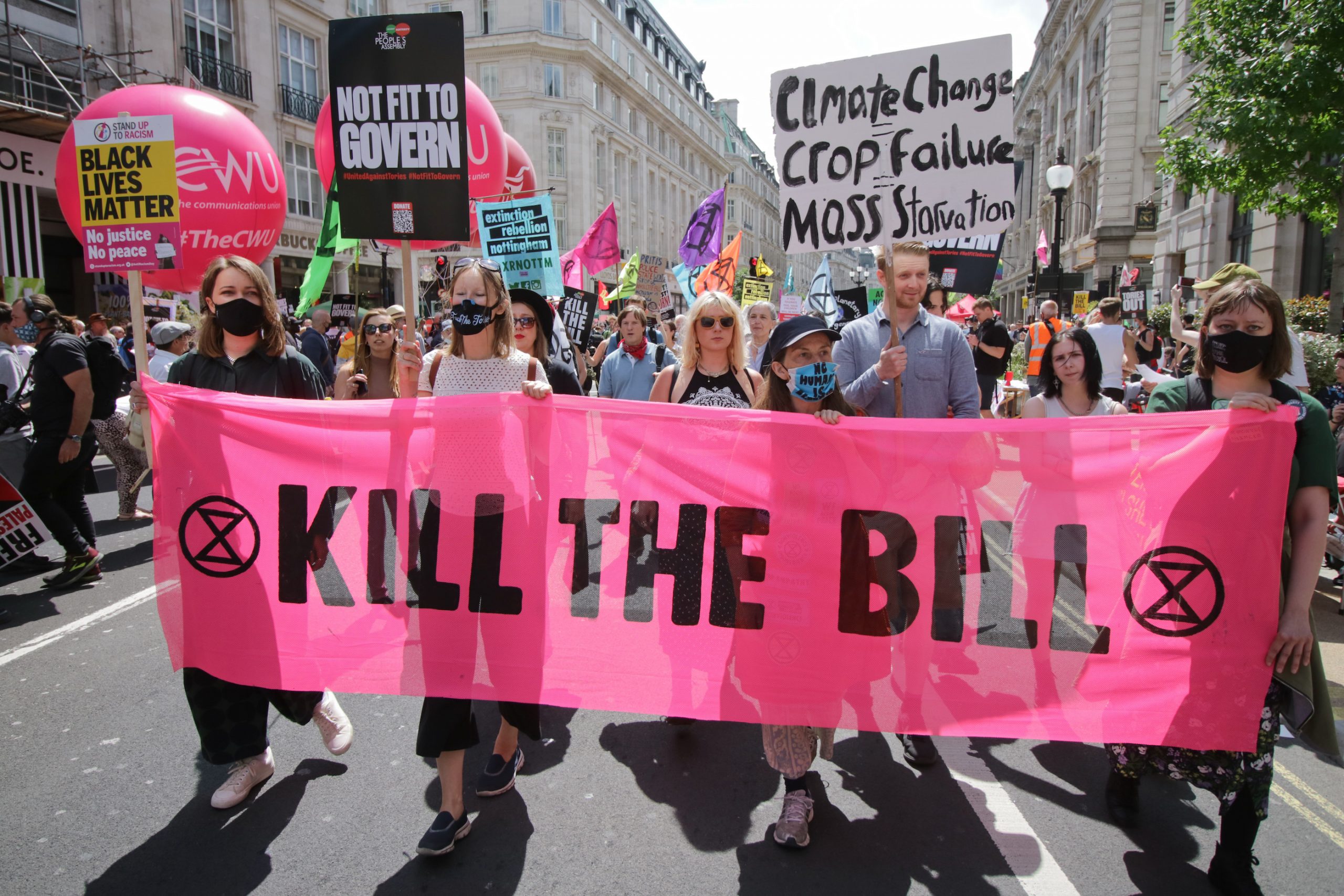 The state is taking a far more aggressive role in the economy than it has since the 1970s. However, the future could look radically different as the people who backed Jeremy Corbyn become the majority.

Corbyn won the under 50s and under 40s, while the Conservatives won the over 60s and over 70s.

At the same time, we’re meant to believe that young voters don’t matter and the old alone determine elections. However, this is not a law of nature. It’s down to geography and not just demographic trends.

The generation coming up is quite different to older generations. This is why there is growing speculation that there may be a political shift in years to come.

The Institute for Economic Affairs (IEA), one of the key neoliberal think tanks in the UK, has published the report Left Turn Ahead, on the idea that younger generations are going to tilt politics in favour of socialism.

The report’s focus is 16-34 year-olds, the so-called ‘millennial’ and ‘zoomer’ generations. Out of this age bracket, 67% of those polled wanted to live in a socialist country.

Furthermore, 75% see climate breakdown as a problem of capitalism. Almost 80% blame capitalism for the housing crisis and more than 70% think capitalism fuels racism.

In short, capitalism is losing its legitimacy among the dominant voters of tomorrow.

The IEA polling supports the idea that millennials and zoomers are more left-wing than their parents and grandparents.

Many people would assume this is going to change as people age, but the report infers that this is unlikely to change unless the housing crisis is alleviated.

The Death of Thatcherism

Popular capitalism is no longer viable because many Britons, particularly the under 40s, cannot afford to get on the property ladder.

Instead, people are paying steep rents for inadequate housing on low incomes. This is despite more people going to university and getting degrees than ever before.

This is a crisis in the making for the political echelon. The Tory government is presiding over an increasingly restive, over-educated and underpaid population.

That’s why it’s important to remember that the 2010-11 student movement later became the base of the Corbyn project.

Those people have not disappeared, and they might be running the show in the future. This could mean a new settlement in UK politics in the 2030s or 40s.

Something has to give because the conditions of British capitalism are particularly egregious. Everything from employment to housing has been run to generate short-term profits at the expense of the country’s predominant living standards.

This is why the IEA has found similar attitudes among people in their mid-40s. The housing crisis is holding back millions of people in the UK.

This is a direct result of the Thatcherite policies to use cheap credit to inflate vast property bubbles.

The Thatcher government launched the right to buy scheme to enable the working to get on the property ladder to create a new section of Tory voters.

Indeed, the young don’t vote as much as the old. But the real reason that older votes can sway elections is that there are more old people spread across small towns and villages.

So, the shift would have to translate into geographic change. This is where it gets more complex.

The Batley and Spen by-election showed how explosive the political dynamics are in certain corners of the UK.

Yes, the status quo held on – but just by more than 320 votes. George Galloway came from nowhere with a new party and won almost 22% of the vote.

The Workers’ Party of Britain may have brought together a chunk of disaffected Muslim Labour voters with hard-to-far-right voters.

The traditional far-right vote share in Batley and Spen ranges from 12% to 18%. Yet this slice of the electorate completely vanished in the by-election.

It’s possible that the Tories absorbed the far-right vote and lost out an equal amount of votes due to the Hancock scandal.

It’s also possible that the Labour Party lost out more votes than it appears since its vote was 55% in 2017. Many traditional Labour voters may have stayed at home, while ‘new’ voters went out for the first time.

This is where it is abundantly clear that the demographics of a community do not guarantee certain voting behaviour. Nevertheless, the political geography of the UK has a lot of room for populists of all stripes.

Galloway will be back when he spots another opportunity to strike at the Labour leadership.

The Workers’ Party has given itself an edge by combining anti-woke, anti-LGBT rhetoric and Euroscepticism with traditional Marxist-Leninist positions on foreign policy.

This is not a winning combination in every constituency, but it can work in certain areas.

George Galloway can still cause an upset for Labour. His brand of socially conservative left populism will work for some voters. But there is much more to this than Galloway.

In 2013, Mike Davis predicted that the Republican Party was dying on its feet thanks to the blossoming diversity of America. He even claimed that the 2012 presidential election might be “the last white election”.

This turned out to be more than just far-fetched.

The 2016 election proved that the racist right can still mobilise enough white voters in key areas to win a national election (at least through the electoral college).

Trumpism showed that the angry white man is not on the verge of extinction.

Stranger still, in the 2020 election Donald Trump expanded the GOP vote in the African American and Latino communities, while maintaining his core white base.

We should not underestimate the capacity for the right to reorganise and reconsolidate its position in new ways.

For instance, the Conservative Party has absorbed much of the South Asian Hindu vote in the UK, while Labour had most of the Muslim vote.

Meanwhile, the Labour Party is demobilising almost every constituency that it once enthused, from the young and diverse to the old and white.

Having ejected Corbyn for a renewed Blairism, the left may be locked out of mainstream parliamentary politics for the foreseeable future.

Fortunately, the British establishment is living on borrowed time.

The political class cannot take it for granted that the Westminster system will enjoy long-term stability.

Rather, it should expect the situation to remain volatile for many years to come.

There was unprecedented instability in UK politics following the Brexit vote. However, the ‘stability’ that the Johnson government has forged may not last long.

The ‘red wall’ gains may be sustained, but the Tory coalition could break down sooner or later.

The 2019 election was the first time the Tories won a strong majority since 1992.

Boris Johnson built on Theresa May’s significant gains in 2017 (which were outshined by Corbyn’s gains) when the Conservative Party won its biggest vote swing since 1979.

What the Conservative government can rely on is the weakness, cowardice and ineptitude of the Labour leadership.

Keir Starmer is not putting up a serious fight against the most right-wing government in post-war British history. We’re all going to pay the price for his lack of nous.

Labour should be trying to build on the coalition of voters that it has left.

Starmer has come out with the ‘buy British’ campaign instead of speaking to young voters – itself a forgotten slogan stolen from the Wilson years.

Yet flag-wagging didn’t save Labour in Hartlepool.

The Labour Party speaks for no discernible constituency. Keir Starmer has managed to alienate and demobilise most sections of the Labour coalition, whether it is white Leave voters in the ‘red wall’ or young, diverse Remain voters in cities.

Meanwhile, the Conservative government can use boundary changes and pork-barrel spending to defend its vulnerable gains in former Labour heartlands.

As much as there may be a long-term youthquake underway, the British right still dominates the political geography.

It may be that there is little hope in electoral change in the next decade.

If so, the only hope may lie in social movements such as Black Lives Matter and Extinction Rebellion that can deliver shocks to the British establishment.

Their appeal cannot be underestimated. The UK just needs a political party that can capture their broad constituency.

George Galloway shouldn’t be the only beneficiary of this environment.

Brexit will turn three on the last day of January, over six years since the 2016 referendum kickstarted Britain’s race to the bottom. END_OF_DOCUMENT_TOKEN_TO_BE_REPLACED

Be careful what you wish for. It may be a cliché, but it’s one the Greens are learning all over again. END_OF_DOCUMENT_TOKEN_TO_BE_REPLACED

Before his arrest, Andrew Tate was just another influencer with bad politics. END_OF_DOCUMENT_TOKEN_TO_BE_REPLACED