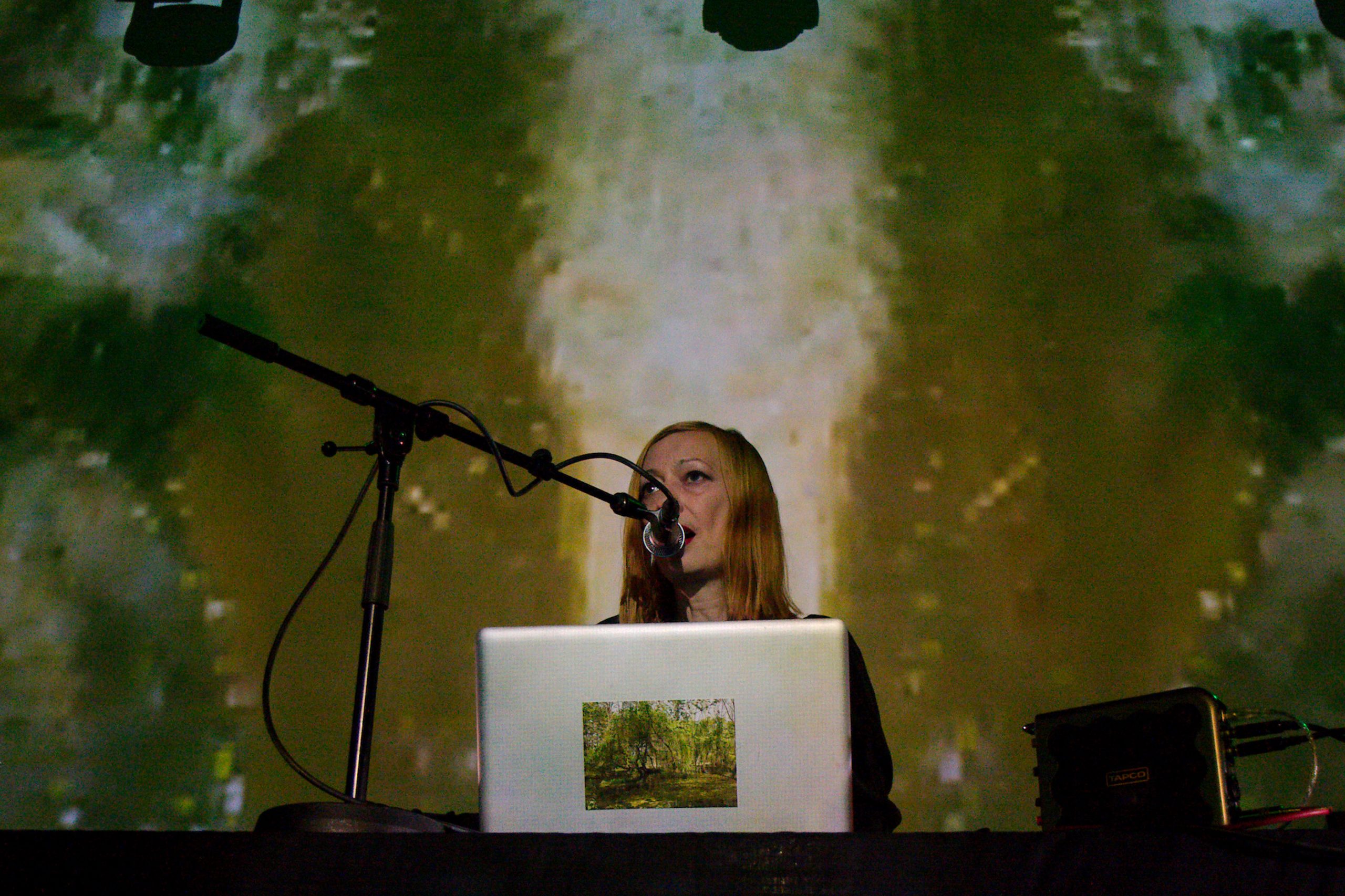 That’s when German post-punk icon Gudrun Gut and Guatemalan cellist Mabe Fratti started working on their new album Let’s Talk About the Weather, which testifies to the creative possibilities opened up by locking down.

In particular, the eponymous four-part suite that brings the album to a close thematises their transatlantic collaboration, reminding us of that time when people were simultaneously paying very close attention to their immediate surroundings and seeking new connections far from home.

We hear voices fading in and out, some of them clearly talking about the weather; a panoply of bird sounds, recalling the time when most international commerce ceased and the natural world seemed to celebrate; and a fitful procession of the sounds for which both artists are famous, reinforcing the impression that we should pay close attention to the fissures that the Coronavirus crisis opened up in our technologically mediated existence.

It’s not the sort of music that one listens to in search of calm or closure. At times, it barely sounds like music at all. But by flirting with structural incoherence, this composite of field recordings, cello, synthesizer, and highly irregular beats invites us to take a broader view of sonic art.

The suite often sounds like the messy intros and outros found on the Tropicalia movement that brought together Brazilian musicians like Caetano Veloso, Gal Costa, and Gilberto Gil in the late 1960s. Whereas the album that they released features songs that emerge from this exuberant chaos, however, Gut and Fratti largely steer clear of conventional musical development.

That this is the result of a conscious decision is made clear by the other tracks on Let’s Talk About the Weather, which put Gut and Fratti’s talents to use making music that is easier to distinguish from ambient soundscapes.

Whereas the different elements of the suite are barely held together by its governing logic, songs like the single Aufregend and In D sustain a taut groove, almost as if they were afraid of what would happen if they slackened their grip.

In the case of “Aufregend” (German for “stimulating”) — which ponders the question of what could still be exciting in an overexcited world, the song’s refusal to shift out of the forceful pulsing that starts it off feels like a commentary on the difficulty of finding places where the pressures of consumer society are diminished.

“In D”, by contrast, offers a less agitating groove, perfectly blending Fratti’s innovative cello playing with the calming metronomic rhythm popularised by the 1970s Krautrock band Neu!, which Gut has often cited as a major influence on her work. Although the song gets progressively louder as it unfolds, the effect is more like a runner gradually working up to a desired pace.

None of the songs on Let’s Talk About the Weather develop in a musical sense. Once they have established a pattern they stick with it. This is not verse-chorus-verse fare. New elements are incorporated into them through a logic of accretion.

It makes perfect sense that the tracks on Let’s Talk About the Weather struggle to go anywhere, musically, since the album is self-reflexive about the confinement that shaped its creation. Both artists were working within the constraints of quarantine: Gut, in her longtime Berlin home, and Fratti, at the La Orduña collective in Veracruz.

The artists could barely leave their homes, much less travel across the ocean. That’s why the album communicates a sense of working within limits. What do you do when you can’t see or hear something new? You learn new ways to experience your immediate surroundings.

The use of field recordings on Let’s Talk About the Weather epitomises this creative myopia, reminding listeners that we are always surrounded by a surfeit of potentially meaningful sounds, ones we typically tune out but can teach ourselves to tune into. And what better time than a pandemic that deprived us of our habitual sources of stimulation?

Because it celebrates the virtues of discerning novelty in the familiar, Let’s Talk About the Weather draws our attention to the historical significance of the collaboration between Gut and Fratti, which began to take root when they were both participating in a Goethe Institute residency in Mexico City back in 2015.

Decades apart in age and experience, brought up in very different environments, the artists realised that they still have a great deal in common.

After moving to Berlin to begin art school in the late 1970s, Gudrun Gut made her name as a crucial member of the proto-riot grrl band Malaria!, and the city’s Geniale Dilletanten – “brilliant amateurs” – a loosely organised group that also included Blixa Bargeld, with whom Gut co-founded Einstürzende Neubauten, Die Tödliche Doris, and, on its more pop-friendly margins, Nick Cave and Die Ärzte.

Mabe Fratti moved from her native Guatemala, where she grew up in the shadow of horrific violence, to Mexico City, which was blessed with a rich improvisational music culture.

As the pandemic began to bring normal life to a standstill, Fratti found herself in Veracruz, at the La Orduña artist’s collective, where she encountered kindred spirits such as Pedro Tirado, Claire Rousay, and the band Tajak, making the subsequent months of isolation much easier to bear.

Although knowledge of what was happening in Berlin in 1980 has surely played a role in shaping those musicians’ sense of what is possible, the feeling one gets in listening to their work is not so much that they are building on what came before, as that they are starting over from scratch on the same foundation.

The different strains of experimental music they draw upon have largely been pried loose from their place in chronological history, instead suggesting a trans-historical attitude towards the act of creation which keeps renewing itself over and over.

In a way, the kind of anything-goes experimental music developed in that Berlin scene – and its equivalent in other “art capitals” of the world, such as New York, London, and San Francisco – functions like those spaces close to home that we know all too well, yet fail to know well enough because we grow numb to their riches.

What contemporary post-punk scenes have the power to do, is to help us recognise new possibilities within that aesthetic framework, ones which are true to its spirit, not by imitating, but by strategically forgetting that there is anything to imitate.

In other words, they make that framework feel new by refusing to recall how old it is. Post-punk scenes renew it by avoiding the reverential posture that turns vital art into a lifeless artefact.

Although the official reason Gut collaborated with Fratti is to celebrate the fifteenth anniversary of the Mexican label Umor Rex, which has strong ties to Germany, it seems clear that she was thinking about the relationship between the two artists’ local scenes at a conceptual level.

Gudrun Gut has worked with many younger female musicians in recent years, often with surprising results, confirming her status as a village elder of experimental post-punk and electronica.

But instead of doing what so many musicians her age have done, exalting their own era at the expense of those that followed in its wake, Gut refuses to rest on her laurels.

On the contrary, she has stepped up her productivity as an artist, often through collaborations like Let’s Talk About the Weather, while continuing to be one of the most adept facilitators of women making music.

It’s a deeply impressive accomplishment, one which her innovative pandemic partnership with Fratti underscores.

Whatever else Let’s Talk About the Weather is doing – the record becomes more interesting with each listen – it demonstrates a fierce commitment to building new bridges across space and time, rather than relying on ones that are already built.

That dedication to novelty is a profound gift at a time when everyone seems to be complaining about how dully prefab contemporary culture has become.

The Russian government is awarding prizes to Macedonian writers. END_OF_DOCUMENT_TOKEN_TO_BE_REPLACED

The 1970s was a decade of broken dreams. The end of the postwar boom brought to a close the era of middle-class liberalism in Europe and North America. END_OF_DOCUMENT_TOKEN_TO_BE_REPLACED