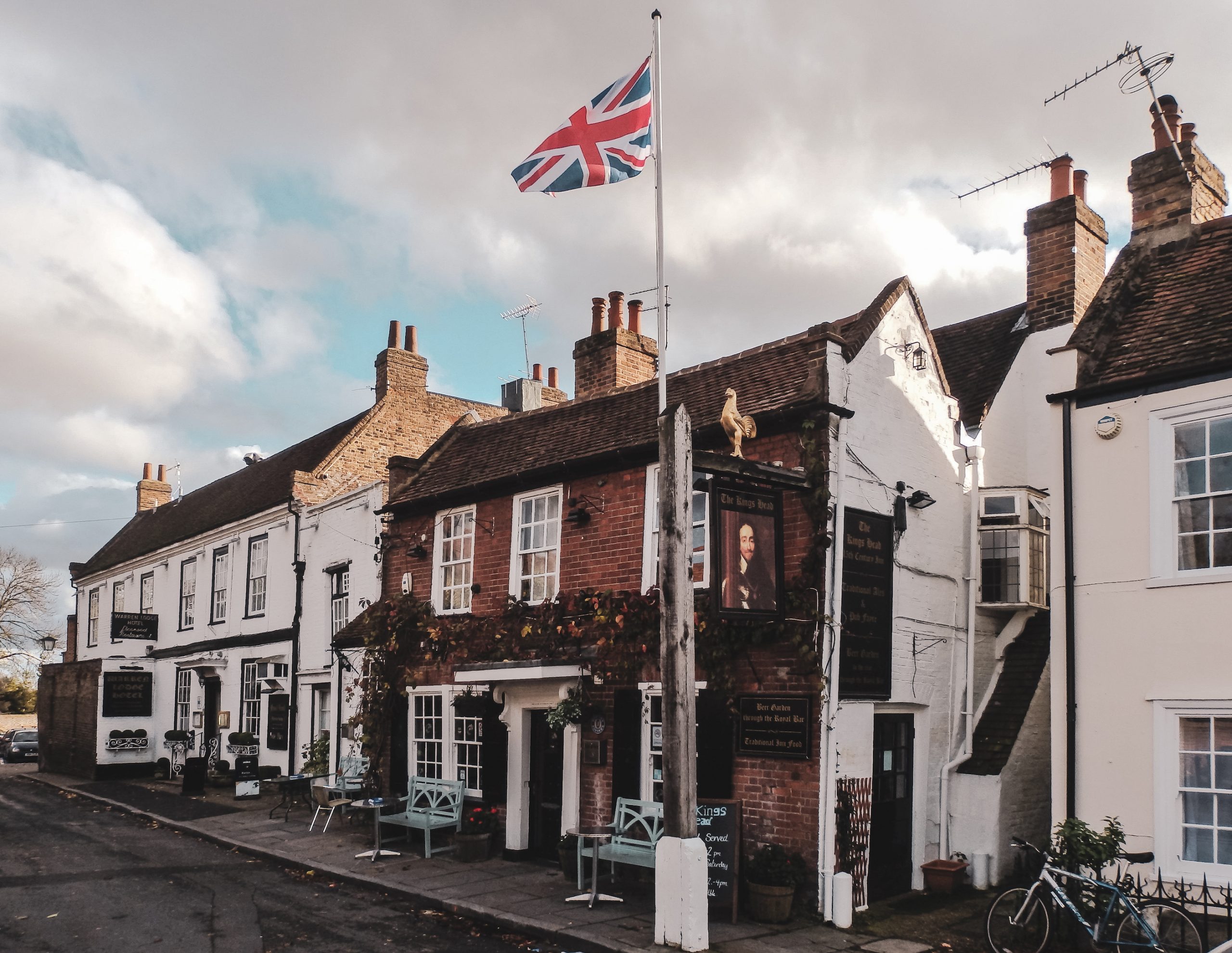 Shepperton is not a tourist destination. You only go there if you happen to work at one of its film studios, or, perchance, live there.

Even if you’re a Ballard fanboy, you still might never visit Shepperton, because it is so unremarkable.

And yet this is where JG Ballard settled in post-WWII Britain. Somehow it’s more apt than odd, but you have to take a long look at the area to realise this. You need to know the novelist’s work to really understand its appeal.

Ballard moved to the neighbourhood with his wife in 1960. The so-called “Seer of Shepperton” took the view that the best way to be an avant-garde artist is to lead a very conventional life. His role model was René Magritte.

The family house at 36 Old Charlton Road is nestled in a comfortable, middle-class neighbourhood. It’s a conventional semi-detached home, identical to many other houses on the street.

The retirement home at the start of Old Charlton Road has been renamed Ballard Lodge.

Of course, if it really was a Ballardian retirement home, the inhabitants would be on the rampage by nightfall. Perhaps it serves its residents roasted Alsatian on Sundays.

Yet Ballard Lodge is the only allusion to the great man on the street.

There is no blue plaque on his former house. Some Ballard fans tried to crowdfund an initiative to buy the house and turn it into a museum, but the project failed.

JG’s Ballard home is a monument of a kind. A site of remembrance for fans like myself to visit on a pilgrimage.

But no monument is really necessary because we live in a Ballardian world.

Ballard jokingly described Shepperton as “the Malibu of the Thames Valley” because of its famous film studios.

To outsiders, such a designation appears generous, if not ironic. Psychogeographers would see this place as a borderland.

Sitting alongside the motorway, Ballard’s house is located on the edge of the city.

From Shepperton, Ballard could drive into the city or to Heathrow Airport where he often had lunch at the Hilton.

Ballard’s home is a short walk away from a fly-over above the M3, across which lies swamp-like land around the River Ash.

The short walk could lead you to a pub, a nature reserve or the motorway.

A golf course and a recycling centre are a home run away from the fly-over. This was the perfect setting for Ballard.

You can imagine him standing on the fly-over quietly observing the continuous flow of cars and lorries rushing into and out of the city.

JG Ballard saw something in these places that no one else saw.

“This world of reservoirs, mariners, science parks and industrial estates. It’s an airport culture. It’s the world of the CCTV camera. I feel that this is the real England.”

Ballard wrote The Drowned World (1962) in honour of the reservoirs in the area. “I realised that I was living on the floor of a sort of invisible marine landscape,” he said.

With his trademark prescience, the novelist had written a fictional account of global warming.

The Drowned World portrayed life in England after the polar ice-caps had melted, thus submerging much of the country.

“We live inside an enormous novel,” Ballard once said.

“For the writer in particular it is less and less necessary for him to invent the fictional content of his novel. The fiction is already there. The writer’s task is to invent the reality.”

JG Ballard seems to have pre-empted life in the twenty-first century.

His body of work covers climate breakdown, terrorism, virtual reality and the power of new technologies. Even one short story imagines a pandemic where individuals only communicate through screens.

As his friend and fellow writer, Will Self later put it: “Ballard may have started out as a science fiction writer – now his texts read as social fact.”

Ballard would follow up The Drowned World with a contrasting vision of ecological dystopia. Originally called The Burning World (1964), later retitled The Drought, the story is set in a world where water has run out thanks to the impact of industrial waste.

These visions of climate breakdown are more relevant than ever. The world is increasingly like a Ballard novel. We have become strange, alienated beings living on a dying planet.

The British novelist could not have known this in the early 1960s. He could approximate what could happen as a man who edited a small science journal. But something was about to happen that would change him forever.

Ballard’s wife Mary died suddenly of pneumonia and he became a ‘single dad’ of three children.

The shock of the loss drove the novelist to begin writing a very different kind of fiction. His preoccupation: sex and death.

Shaken by this loss Ballard started writing the short stories that would later become The Atrocity Exhibition (1970). It was highly experimental, following the cut-up method of William Burroughs.

The reader is expected to flick open the book at a random page and start reading. It reflects back at the reader the media obsession with killing and fucking. The novel was Ballard’s first taste of controversy. And he was only getting started.

One infamous chapter in The Atrocity Exhibition is entitled “Why I Want to Fuck Ronald Reagan”.

The book’s publisher, Bill Butler, faced an obscenity trial over the story.

Ballard himself was meant to be called to the stand to defend his work. But the defence decided against it because Ballard told them the story was intended to be obscene and offensive.

Doubleday was forced to destroy its first edition for the US market because it included the Reagan story.

Nevertheless, a group of Situationists would later repackage the story as a serious psychological study produced by a conservative think tank.

The plan was to distribute it at the 1980 Republican National Convention. They managed to get the seal of the RNC on the front cover after passing it off as a survey.

The pranksters served the pamphlet to the very delegates who would make Reagan the presidential candidate.

By this time, JG Ballard had established his reputation as a great writer with a shocking imagination.

His most notorious work Crash (1973) sent shockwaves through the literary world, baffled many of his fans and appalled journalists.

Much like The Atrocity Exhibition, Crash took a long, hard look at the dark side of sexuality.

The same coalition would re-emerge more than 20 years later when David Cronenberg adapted the book to film.

Despite his reputation, Ballard was a moralist capable of exploring depravity with a discerning eye. He styled himself as a kind of anthropologist.

His background in medicine gave him a knowledge of anatomy. Dissecting the human body as a medical student was a fundamental experience for Ballard.

The novelist once claimed that it’s an experience that everyone should go through. Dissection fed into much of his work. Except it was society he dissected in his books.

The truth is that the middle-class reader is JG Ballard’s subject. The English bourgeoisie, with its priggish, small-minded worldview, its lack of ideas, its emptiness and its secrets.

The dark side of respectable banality was what Ballard took aim at.

In many ways, Ballard was the embodiment of what he was taking apart. He was a very genteel, conventional man with a lot of baggage from the era in which he grew up. But his literary life was non-conformist.

Today, you don’t need to go to Shepperton to find a landscape suited to Ballard. Many parts of the UK now resemble the setting of his novels, from the US-style shopping malls to ultra-modern architecture.

All the while, we are getting more alienated and more dystopian as the years go by.

Once again, the UK finds itself at a dilemma over Northern Ireland. END_OF_DOCUMENT_TOKEN_TO_BE_REPLACED

It’s been one horror story after another. Since Vladimir Putin first invaded Ukraine, the press has been deluged with reports of raw materials shortages and Europe’s reliance on Russian energy imports. END_OF_DOCUMENT_TOKEN_TO_BE_REPLACED