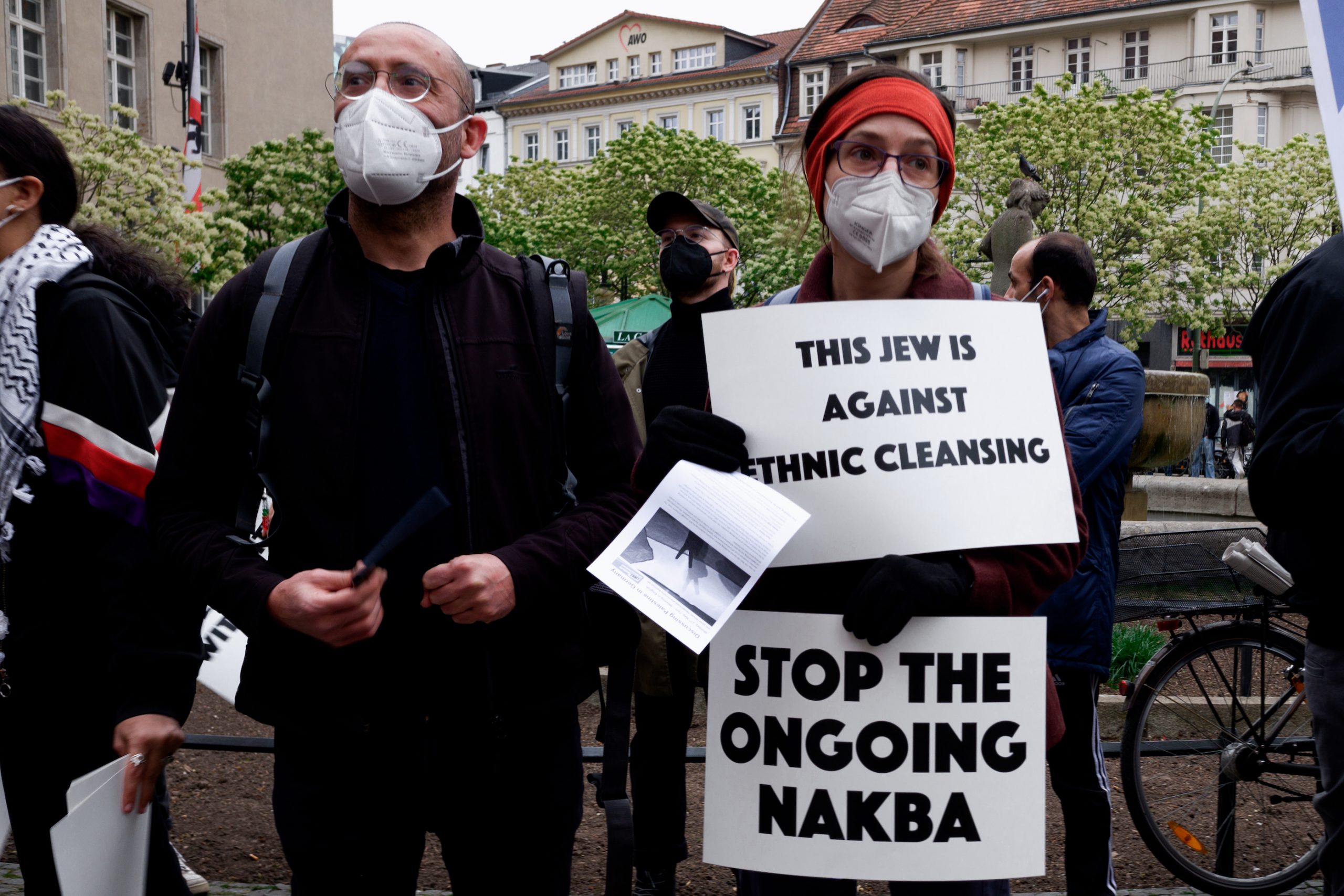 Not just the kind that Germans associate with rightwing tabloids like Bild.

The article in question was in Berlin’s newspaper of record, Der Tagesspiegel.

A daily with more highs and lows than its better-selling Springer competitor, this was one of Tagesspiegel’s predictable fails.

It was an article on Middle Eastern politics in Germany, an area that the newspaper is stronger on polemically than editorially.

The subject was an initiative to ban Hamas flags in the country, heavily supported by the Social Democrats (SPD).

Compiled from newswires, there was nothing objectionable about how the article was written.

My only quibble is that it could have referenced a 2009 court order allowing Hamas flags to be flown at a demonstration. Tagesspiegel covered it at the time.

Rather, it was the image that was assigned to the article. Instead of a Hamas flag, which has featured in the 2009 article, the newspaper had gone with a picture of a Palestinian one instead.

For a periodical of Der Tagesspiegel’s stature to have made such an error was of course depressing.

Upon spotting it, The Battleground’s Wieland Hoban wrote to the newspaper three times, asking to correct it. Tagesspiegel never responded to him.

Given the large Palestinian population in Berlin, we assume that the paper had received numerous similar corrections. It took a while, but the image was eventually updated.

A photo of sinister-looking masked Islamists, holding green flags, was put in its place.

Not identified as Hamas flags in the caption, they came close. At least the colour was correct. Still, the image remained wanting. The update was half-hearted.

Couldn’t the editor find the photo used in the 2009 article? A little grainy, it could have been upscaled to run again. At least it sported the Quranic text absent from the update.

Still, the damage was done. For the period of time that the article was newsworthy, it had the wrong flag in it.

I’d taken a screenshot of the original photo, and had intended to write a piece about the error. But, bigger issues called, and I decided to shelve discussing it until now.

The 2021 election is as good an opportunity as any. Not to take Der Tagesspiegel to task, so much as to explain what the problem says about who the German press think their readers actually are.

As an Israeli national, who has lived in the country since 2010, I always find myself responding to what I perceive as provincialism and inexpertise in German coverage of Israel-Palestine.

I wouldn’t respond this way if it weren’t for the Holocaust. Somehow, I expect Germans will work harder because of it to get things right. It’s a big ask. Hence my disappointment.

Instead, what I encounter are expressions of solidarity laden with narcissism. They never address Jewish readers, but rhetorically demand that past discrimination isn’t repeated.

So, Muslims are assumed to be Antisemites, and Palestinian attacks on Israelis are racist. There’s never any room to discuss Israeli policy’s impact on Arab violence, in the region and abroad.

It’s only ever a question of Muslim-on-Jewish hatred. Despite German admiration for Israeli fortitude, Jews remain eternal victims in their journalistic imaginary, without any agency.

Thus, the image error in the article about Hamas flags. It took forever to get it replaced because the facts are of little importance to this narrative.

Palestinians are inherently guilty anyway, so why bother. The use of a Palestinian flag, in the place of a Hamas one, implies that Palestinian is the same thing as Hamas.

If you know anything about the framing of the Islamist movement in German news media, this is in keeping. Hamas is a synonym for terrorists, like ISIS. It’s just another jihadist group.

Move to ban Hamas flag is in response to reports of violence and anti-Semitism at rallies in Germa ..https://t.co/o4g3VbaVRz

Israeli news media often indulge in similar conflations, much to the chagrin of Palestinian Israelis, and Palestinians living in the Occupied Territories who take in Israeli press.

But that’s Israel. It’s not Europe, and Germany is not in the Middle East. Applying a rightist Israeli editorial filter doesn’t work.

The problem is that it gets used as cover to discriminate against Muslims and Arabs in the country. Tagesspiegel’s editorial error replicated this tendency.

As an Israeli journalist, I can’t help but see such issues as being emblematic of how difficult it is to be Jewish in Germany today. How on earth can the Germans think this is helpful to us?

All it does is compound the anger that Palestinians and Muslims feel towards my community, by telling them that we matter more than them and that they are second class immigrants.

Der Tagesspiegel may just be a newspaper, but it is one that serves an incredibly multiethnic city, in which Muslims play an enormous economic and cultural role. Particularly its Palestinian community.

In such a context, it behoves local news media to take into account the identities of the communities they serve. Compensating for the Holocaust should not impinge on that in any way.

Such efforts should underline it, by inspiring German media to recognise it was not just Jews who were targetted by the Nazis, but diversity. Jewish identity stood in for that more than others.

Gaps like these continue to exist because the German media continue to overlook the German Jewish community for who we are. Not as current residents of the country, but as ghosts.

This kind of coverage is a great example. It imagines a Jewish news consumer as being largely fearful and reactionary and espouses opinions of Muslim Germans not too different from Israelis.

That is, the kind of Israelis who vote for centre and far-right parties and read tabloid newspapers like Israel Hayom. Not the sorts who live in Berlin.

While German media can do a lot better in other areas – think coverage of the lack of minority outreach by German parties during the election, and promoting voting rights for permanent residents – improvement is indeed possible.

Granted, these are old issues, which should have been bigger in past election coverage. Still, you get the point.

There is no daily media in Germany that addresses the country’s growing Jewish community as politically mature, independent news consumers.

This election season, I gave up trying to find any hint of such. Failures like that of Der Tagesspiegel, to do due diligence on issues like the Palestinian flag photo, beat it out of me.

That doesn’t mean I need leftist or Jewish press to address such deficits. What it means is that Jews who live in Germany need to be served by media that know who we are better.

Until that happens, I can’t imagine taking German coverage of Jewish and Israel-adjacent topics seriously, even though I wish I could.

Germany is an important place for Jews. Not just for historical reasons, but because we exist here, as a community, now.

I can’t think of a better opportunity than that of a new government, one decidedly different from that led by Angela Merkel, to talk about how this might happen.

As much as I appreciate her decision to open the borders in 2015, the racism that followed the refugee crisis was unbearable. Merkel was unprepared for it and it’s only grown worse over time.

From the rise of the AfD to the Nordkreuz, the attack on the Halle synagogue, and the yellow stars worn by Querdenken, Muslim Antisemitism pales in comparison to the German version.

If only the German news media was capable of covering this properly.

Not many newspapers begin life like The New European.  END_OF_DOCUMENT_TOKEN_TO_BE_REPLACED

It’s remarkable how candidates in the Tory leadership race have channelled Margaret Thatcher. Especially as they’re barely old enough to have experienced her policies. END_OF_DOCUMENT_TOKEN_TO_BE_REPLACED

The Russians have struck Odesa again, this time mere hours after reaching a deal with the Ukrainians. Though spared the worst of the war, an attack on Odesa is an attack on the best of Ukrainian and Russophone culture alike. END_OF_DOCUMENT_TOKEN_TO_BE_REPLACED