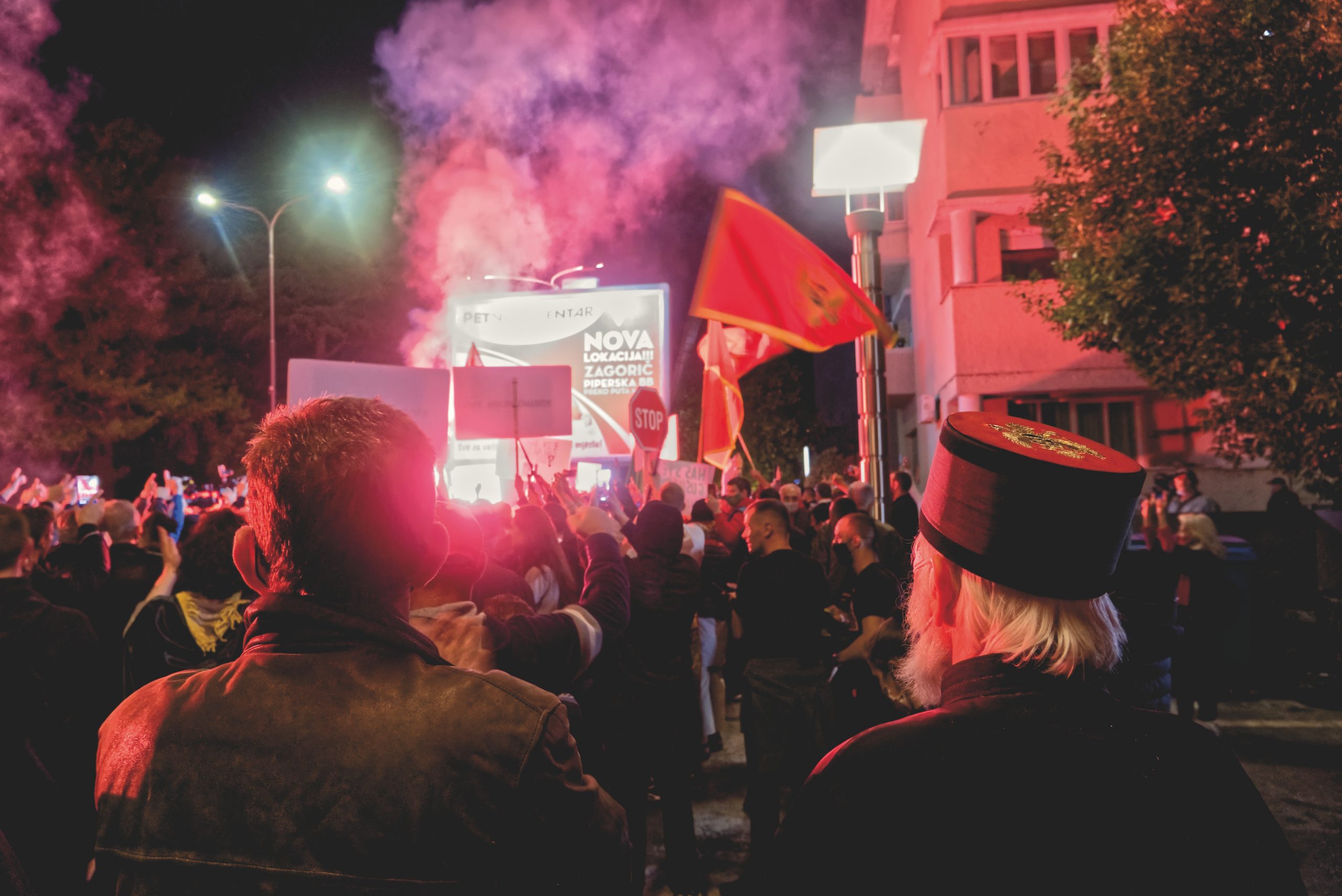 Milan Knezevic, who has been recognised as the party’s most ardent Russophile, called on his coalition partners to respect the electoral results and allow the DF to take over the levers of power.

Failing that, Knezevic threatened to “internationalise” the otherwise self-induced crisis of political legitimacy in Montenegro.

The Democratic Front leader’s warning is a product of growing frustration within the party over the significant compromises the coalition made with the Serbian Orthodox Church before and after the 2020 parliamentary election.

These compromises were a sign of the political strength of the late Metropolitan Amfilohije, and of his refusal at the time to allow anyone else to act as a political leader of the Serbs living in Montenegro.

Initially, the DF did not protest much over being denied ministerial posts. Early sparks between members of the ruling coalition were signs of infighting within the neo-Chetnik movement.

In doing so, they were betting on gaining a tactical advantage over their competitors in upcoming elections. This was their long-term strategy.

One year after the election, the situation for the DF does not seem all that bad. Its party cadre controls a number of important economic enterprises in Montenegro and significant sections of the state bureaucracy.

Moreover, the regional political and security situation in the Western Balkans has worsened over the last several months in a way that gives a significant push to the Democratic Front, and it makes its leaders feel stronger.

This is why this right-wing coalition of Serbian nationalists is now speaking openly about holding an extraordinary election as a sure way of ending the current crisis.

This is also why the DF has threatened to “internationalise” the crisis, and blackmail its colleagues in the ruling coalition.

This is why the latest threat by Milan Knezevic should be taken seriously.

Knezevic’s statement is a warning to the West that it has to approach the crisis in Montenegro as a Serbian nationalist revival.

It is also a reminder that the Democratic Front has powerful allies in Belgrade and Moscow.

The rhetoric is typically reactionary and cover for Serbia’s historic policy towards Montenegro.

The ongoing, secession-minded offensive by the leaders of the Republic of Srpska para-state, and the Aleksandar Vučić-led crisis in Northern Kosovo, are the results of such policies.

The DF’s threat is also a message to the so-called Serbian electorate in Montenegro.

The aim is to prove that the Democratic Front is their representative and the voice of nationalist sentiment, dedicated to “all Serbs in one state”.

History teaches us that a dream of every hot-blooded Serbian nationalist is to have Montenegro, Kosovo, and the Republic of Srpska unite with Serbia.

The DF leaders believe they’re the executioners of the dream, to make sure this “holy trinity” joins mother Serbia.

With that in mind, it is reasonable to suggest that the Democratic Front taking over major government portfolios would further destabilise Montenegro and problematise its foreign policy objectives and international obligations.

Truth be told, such concerns might not be why the rest of the coalition keeps preventing the DF from completely taking over. Internal power politics is more likely to blame.

To look at the bigger picture for a moment, it has to be repeated over and over again that the breakup of the Socialist Federal Republic of Yugoslavia (SFRY) is yet to be finished.

Citizens of Montenegro, Kosovo, Bosnia and Herzegovina, and Serbia are living through the final phase of the Yugoslav dissolution.

We must not forget that the nationalism which destroyed the SFRY will not accept any result other than one which satisfies its expansionist appetite: Greater Serbia.

We can clearly see this in the current crisis in Kosovo, Montenegro and the Republic of Srpska.

One of the ways to do this is to dismantle established models of governance in Montenegro and welcome potentially malevolent outside influences.

Another such tool is the census.

The ruling coalition is pushing for a new census to prove that Serbs are the majority in Montenegro, to legitimise the existence of the so-called “political Serbs”.

To understand the meaning of “political Serbs”, one must examine census data for Montenegro between 1991 and 2003, in light of what happened then. During this tumultuous time, the Serbian population grew from 9.34% to 31.99%

If the next census were to show an even greater percentage of Serbs living in Montenegro, the DF and other Serbian nationalist groups would be able to legitimise their secessionist demands.

Plainly put, Serbs could call for a referendum on Montenegrin independence, in the hope of reversing the outcome of the May 2006 vote, and returning the country to Belgrade’s rule.

In light of the upcoming elections, what is so frightening about the Democratic Front are Russia and Serbia stepping up their involvement in the region in support, together with the Serbian Orthodox Church (SPC).

The seriousness of the DF’s effort to solicit the SPC is confirmed by a sudden and rather panicky visit by the President of the Montenegrin Parliament, Aleksa Becic, to a prominent priest, Father Gojko Perovic, soon after Knezevic made his threat.

The frequency and aggressiveness of demands for satisfying Serbian nationalists in Montenegro and beyond is in direct proportion to the strength of both the EU and the US engagement in the Western Balkans.

The gradual disengagement of the EU has emboldened Serb nationalists to demand more and to do so with a sense of urgency.

On the bright side, the latest announcements from the Biden Administration, about the new US ambassador to Serbia, might well give pause to Serbian nationalism. One can only hope.

Turning towards Brussels, statements at this month’s European Union meeting in Slovenia warn that the speed of accession is in the hands of the individual states in the Western Balkans.

While shifting responsibility to the region is neither new nor a matter of concern, EU statements about the “future” and “perspectives” speak to its lower levels of engagement with the area.

The history of European pragmatism in the Balkans and the EU involvement in Montenegro are no reassurance it will help the country resist Serbian nationalism.

In a region where people eat memory for breakfast, it is impossible to forget that the European Union did not prevent this very same nationalism from exploding in the 1990s.

With that in mind, we might be well advised to lower our expectations of Europe and look for homemade remedies for our political and social ills.

A shorter version of this article appeared in Pobjeda. Photograph courtesy of Natalie Sarkic-Todd. All rights reserved.

Brexit will turn three on the last day of January, over six years since the 2016 referendum kickstarted Britain’s race to the bottom. END_OF_DOCUMENT_TOKEN_TO_BE_REPLACED

Be careful what you wish for. It may be a cliché, but it’s one the Greens are learning all over again. END_OF_DOCUMENT_TOKEN_TO_BE_REPLACED

Before his arrest, Andrew Tate was just another influencer with bad politics. END_OF_DOCUMENT_TOKEN_TO_BE_REPLACED