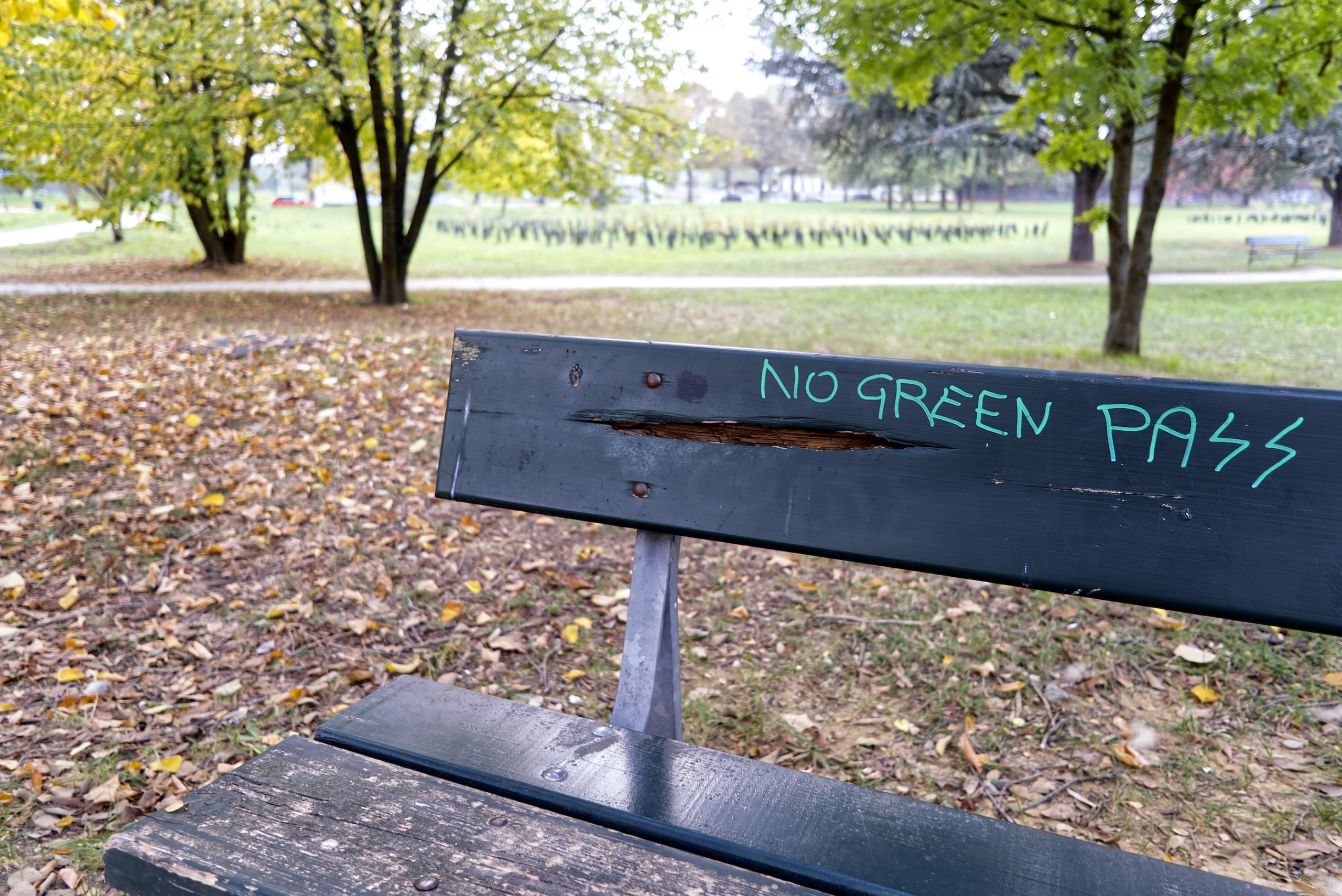 It’s now being issued in many European (and some non-European) countries to those who have tested negative in swab tests, or who have completed a COVID-19 vaccination cycle.

The pass is now required in Italy to do almost everything, including eating at a restaurant, taking a train, going to a health provider, and most importantly, going to work.

This version of the EU norm comes from the new government led by Mario Draghi, the former European Central Bank president turned technocratic politician, who was made Italy’s premier at the beginning of 2021 by a very large coalition including the current Partito Democratico– Movimento 5 Stelle majority and a large part of the right, including Lega Salvini and Forza Italia.

Open opposition to Draghi is now mostly reduced to Fratelli D’Italia (the largest surviving remnant of the old Movimento Sociale Italiano, a ‘post-fascist’ far-right party) and a galaxy of tiny extreme right groups, all fascist to a certain degree. But these forces hardly have a coherent common strategy.

As said before, other countries have some form of vaccine certification. But only in Italy is this measure so sweeping and stringent.

The justification offered by its supporters is that it will encourage widespread vaccination without making it mandatory, something that is legally difficult to implement and enforce, and that would be highly unpopular.

Opposition to the policy is divided into two camps, which are often conflated with each other, but are in fact separate: anti-vaxxers, who make up an estimated 3% of Italy’s population, and green pass sceptics, who see the measure as a sign of creeping fascism and a rehearsal for future social controls.

Being that this is Italy, this is the theoretical version of the situation. Reality is always messier.

The Green Pass is being enforced in the workplace and government offices, but its application in private establishments, like bars or restaurants, particularly in Southern Italy, is spotty at best.

However, Italians have demonstrated to be favourable to vaccines, with 74% of the population fully vaccinated (with two shots, the third being now administered to older or fragile individuals).

Italy boasts the world’s third-highest vaccination rate and its effects can be seen everywhere in a country that one year ago was entering the second wave of the pandemic, with devastating results, and whose vaccination campaign began with the AstraZeneca failure.

There’s no doubt the vaccine is working. At least for now.

But this success story seems to be at odds with the controversy surrounding the Green Pass and the polarising effect it has had on the public discourse.

For those supporting the Green Pass (and Draghi), it’s simple: people protesting or criticising the pass are all anti-vaxxers, enemies of science, and/or fascists.

Of course, the description fits some of them, but check into most of the No Green Pass rallies that have been very irregularly held around Italy in the last couple of months, and you would see — near your usual conspiracy nuts — the faces of people with proven antifascist credentials.

And last month a group of intellectuals, many of them bona fide progressives, signed a manifesto that expressed some grave doubt about Green Pass politics. But those expressions of dissent have been, at best, marginal.

Anti-Green Pass protests are frequent but often flops, and despite the “we’re being overrun by anti-vaxxer” hysteria, not much of an organised far-right operation.

Until 9 October 2021, that is, when the Forza Nuova riots shook Rome.

“Forza Nuova” (New Force) is, along with their cousins and rivals CasaPound, the face of violent fascism in Italy.

Notwithstanding their “anti-system” rhetoric, the history of this movement and its leader and founder, Roberto Fiore, is linked with some of the darker moments in Italian politics during the Years of Lead, the decade of Italian homemade far-left and far-right terrorism, the Cold War and post-Cold War Europe.

Fiore began his political trajectory very young, in the late 1970s, as a member of Terza Posizione (Third Position), a shadowy group of ex-MSI members tired of the party’s “moderate” stance. Terza Posizione morphed into Nuclei Armati Rivoluzionari (NAR), the most violent of all late seventies fascist terror groups.

There’s substantial evidence that the Bologna attack was planned and ordered by Licio Gelli’s P2 “lodge”, and that the Nuclei Armati Rivoluzionari were pawns of the Italian Strategy of Tension, wherein both the far-right and far-left and security forces are said to have been encouraged to carry out terrorist acts by NATO.

When the NAR and Terza Posizione were finally cracked down on in the early 1980s, Fiore had already gone into a very comfortable exile in London, some believe, under the protection of British intelligence, who helped him escape being eliminated as an “inconvenient witness” to the crimes committed under his leadership.

The United Kingdom refused extradition requests from Italy. When Fiore finally returned in 1999, not only did he remain free, despite multiple criminal indictments. He’d also become very rich, having built up a successful network of travel agencies and “import-export” businesses.

Any attempt to make Roberto Fiore accountable for his past (and there have been more than a few) failed, and in at least one case, someone who was after him died a violent and unexplained death at the hands of the Sicilian mafia.

Back in Italy Fiore, who loves to present himself as a respectable businessman, didn’t quit politics. During his stay in the UK, he had already founded Forza Nuova.

According to Roberto Fiore, Forza Nuova would be a meeting point for old school traditionalists (reactionary Catholics, anti-modernists, homophobes and abortion opponents) and the most aggressive fringes of hooligan fascism, the part of the extreme right that burrows into the poorest area of big cities, especially Rome, hostile to immigrants, often dabbling in crude Antisemitism.

Unlike CasaPound, there’s no intellectual pretence in the Forza Nuova worldview. It’s just a mixture of reactionary themes baked into a cartoonish Mussolini aesthetic.

Fiore seems to be more interested in keeping his movement visible than making himself appealing or popular. Forza Nuova ran in a few elections, with abysmal results (a few thousand votes), but it’s clear that ballot success is not what Fiore has in mind.

The party chief pursues a double strategy: on the outside, he has made Forza Nuova into the last redoubt for fascist nostalgia. On the inside, he’s pursuing personal financial success and a complicated personal network of right-wing alliances.

Roberto Fiore is successful with the former, but only partially with the latter. Attempts to collaborate with Berlusconi’s Forza Italia and Salvini’s Lega failed, as both parties are afraid to lose the moderate vote to Fiore’s shock tactics.

He worked with Alessandra Mussolini (Benito’s niece) to start a powerful neo-fascist movement, but besides winning a seat in the EU parliament, nothing relevant came out of it

But again, Forza Nuova is not about traditional political power. It’s about keeping a flame alive, the waters always below boiling point, but above mere simmering.

Violence is part of it, and it’s not random. Forza Nuova’s muscle is enlisted from a pool of football hooligans and small-time criminals and involved in dozens of violent raids.

In 2013, it briefly made headlines a series of attacks on Bengali immigrants living in Rome. An investigation reveals the violence may have something to do with a construction workers’ racket, but frustratingly nothing more comes out of it.

In the meantime, not only does Fiore continue to pose as a successful businessman and family man (he has twelve sons), but his blatant promotion of fascism in a country where fascism is in theory forbidden by law goes on unchecked. At least until now.

These questions returned to the public eye on 9 October. On that day, another “No Green Pass” rally was held in Rome. The expected attendance was small, maybe a couple of thousand people. Instead, almost twelve thousand show up.

An estimated 3000 tattooed and shaved Forza Nuova militants hijacked the event, and at least initially unimpeded reached the headquarters of CGIL, the most powerful left-wing union in Italy, and proceeded to devastate it.

It’s the first time in years there was an openly fascist attack on a major union. And the police, busy controlling (even aggressively) other parts of the rally, were largely passive in the face of Forza Nuova’s violence.

It’s not difficult to understand that opposition to the Green Pass is one side of the story, maybe the least important. Forza Nuova has openly opposed the Green Pass from the start. But such opposition has never been high on Fiore’s agenda, while anti-socialism is. Hence, CGIL.

Crucially, of almost 6000 anti-Green Pass protests, rallies, and sit-ins held in Italy over the last few months, only a minuscule number involved violence and visible “street fascism”, especially in Rome. So the 9 October events weren’t a random occurrence. But again, why?

Roberto Fiore’s history of collaborations with security agencies, apparent impunity, and the fact the violence occurred just before the ballot turn of Rome’s mayoral election suggests that we’re seeing another run of the Strategy of Tension, the use of extreme political violence to corral the population into accepting authoritarian measures.

Italy’s Minister of the Interior, Luciana Lamorgese has refused the comparison while reporting to the parliament, speaking of simple “inefficiency” and that the police forces were taken by surprise, something that seems hardly accurate if one knows how Italian security works when politics is involved.

Centre and centre-left political parties, and even those to the right, condemned the violence, and Draghi himself received the CGIL leader’s, Maurizio Landini in a display of support.

But it’s no secret that Landini has criticised some of Green Pass’ implications for labour rules, and it’s not a secret that Draghi’s supporters in the technocratic centre (which includes now most of the PD) expect Draghi to implement market-oriented reforms.

In a country that was saved last year from total collapse by its welfare network, “reforms” have taken an unpopular and ominous meaning.

It won’t be by chance that when the time comes for such measures, and real left opposition (now extremely marginal in Italy) could coalesce in opposing them, fascism will once again raise its very ugly head.

After all, it already has.

Once again, the UK finds itself at a dilemma over Northern Ireland. END_OF_DOCUMENT_TOKEN_TO_BE_REPLACED

It’s been one horror story after another. Since Vladimir Putin first invaded Ukraine, the press has been deluged with reports of raw materials shortages and Europe’s reliance on Russian energy imports. END_OF_DOCUMENT_TOKEN_TO_BE_REPLACED