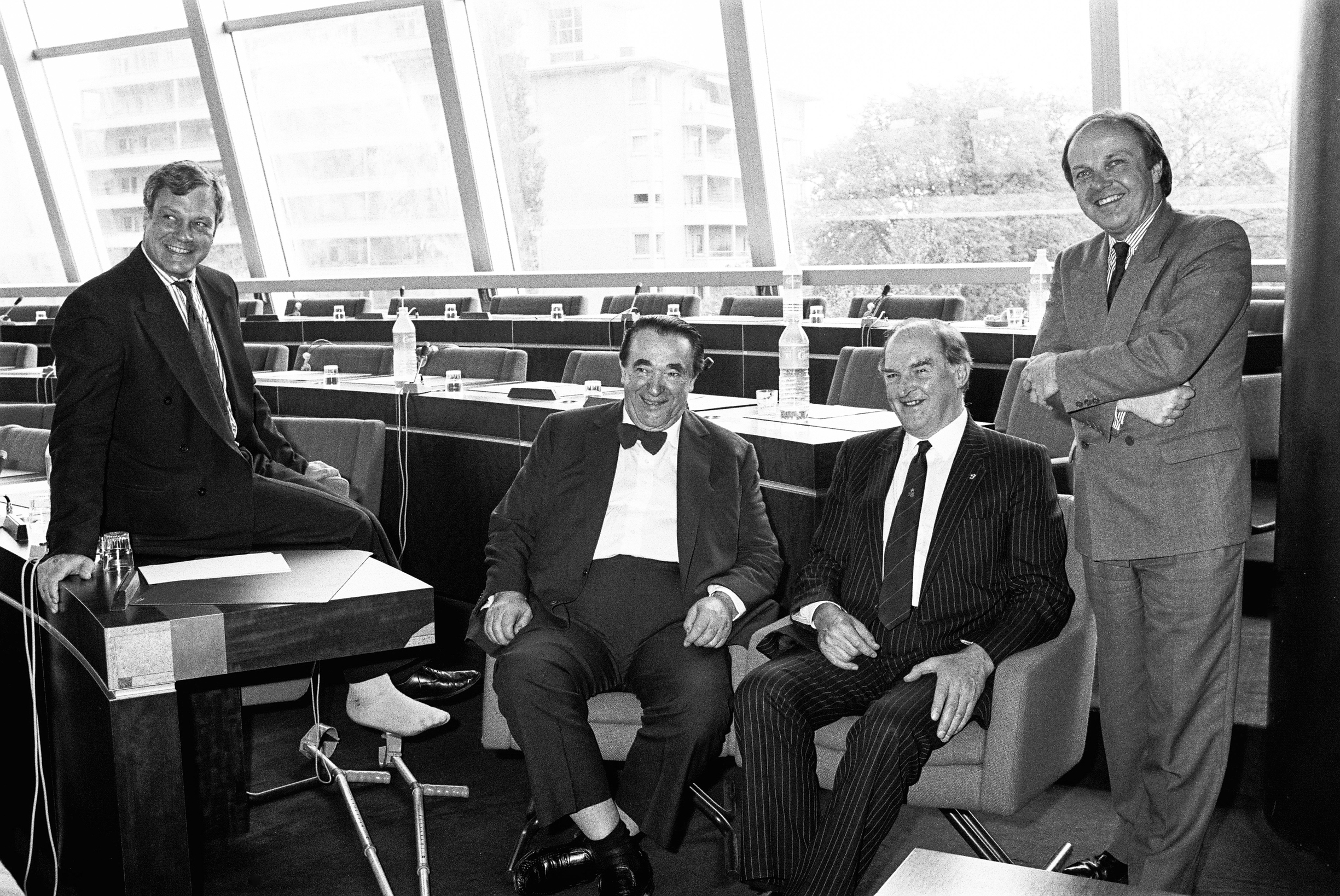 The Lady Ghislaine, a 180-ft super-yacht, was stationed near the Canary Islands. Captain Bob had got up to relieve himself.

It wasn’t good enough to use the facilities provided aboard his luxury vessel. Captain Bob decided to go to the stern of the boat and urinate off the deck.

This was Robert Maxwell, the man who owned The Daily Mirror.

Instead, Maxwell was pissing in the sea. Then he fell head-first, into the water.

It was a grim, yet befitting end for a man who had looted the pensions of his employees.

The scandal over Robert Maxwell’s embezzlement would hit the newsstands shortly after his demise. This is partly why some people believe his death was a choice.

“He was a man who could not face the ignominy of jail or being shown to be a liar and a thief. And he very much knew that was coming,” said Roy Greenslade, former editor at The Daily Mirror.

“So I am a suicide theorist,” said Greenslade. “I believe Maxwell threw himself off.”

Rumours that Maxwell was a Mossad spy had followed him for decades and the almost state-like funeral he received in Israel gave new life to such speculation.

By this point, the British press had changed for the worst.

Far from the self-serving mythology of crusading journalism, Fleet Street had become the home of courtier journalism to the rich and powerful – while celebrity gossip and sleaze were headline news.

Naturally, the chancer Maxwell had helped complete this transformation.

He didn’t mind courtier journalism provided it was his court. This is a proud tradition in the British press, but Captain Bob took it to a whole new level.

Seven years earlier, Robert Maxwell was on top of the world.

He had regained his fortune in publishing and bought the Mirror in 1984. Yet the problems were soon very clear to Mirror readers from the start.

Not content with the newspaper’s standards, Robert Maxwell swiftly turned it into a megaphone for self-promotion.

He even tried to use investigative journalist John Pilger as a courtier reporter and asked him to come with him on business trips to publicise his glorious achievements.

Megalomania is a professional deformity of the press baron. Many of them lose the plot in the end.

What was different about Robert Maxwell was that his delusions of grandeur were primarily about himself.

After 18 months, more than one million people stopped reading The Daily Mirror.

Maxwell almost killed the paper during his reign. Not just in terms of circulation either. He embezzled the company’s pension fund.

However, the Mirror was just one part of the media empire Robert Maxwell was building.

Maxwell bragged that he was overtaking Rupert Murdoch, his old rival. Throughout the 1980s, he would lie to shareholders and commit fraud to support a relentless expansion.

The press baron bought a fifty per cent stake in MTV Europe, purchased Macmillan Publishers and launched The European.

Nothing was ever enough for Robert Maxwell.

He enjoyed flying low in private jets and dining on fresh salmon and endless champagne every night. He surrounded himself with flunkies and would sue any journalist who dared challenge him.

By 1991, Robert Maxwell’s empire was starting to fall apart.

He decided to sell his beloved Pergamon press for $400 million. Rather than take a breather and solve his business problems, Maxwell bought the New York Daily News.

He snapped up the Daily News when Trump was fantasising about becoming a media tycoon himself. Yet Robert Maxwell was obsessed with outflanking News Corp, not the Trump Organisation.

The Donald was so enraged that he boycotted Maxwell’s party on the Lady Ghislaine despite having attended past parties.

And Trump would go on to attend parties with Ghislaine Maxwell and Jeffrey Epstein after Captain Bob’s mysterious death.

Long before Robert Maxwell fell off his yacht, the British newspaper industry was dominated by paternalistic toffs.

The men who owned the newspapers were actual lords and barons. They were in the business of manufacturing public opinion.

By the 1960s, Maxwell was looking to expand. He saw that Fleet Street was changing and there may be an opportunity for a new millionaire like himself to build a newspaper empire. But he needed a place to start.

In 1968, the Carr family, one of the old press dynasties, was considering its options to sell The News Of The World.

Robert Maxwell and Rupert Murdoch, a newcomer to the British press, were two prospective buyers.

Maxwell was a wealthy businessman associated with the Labour Party and was the MP for Buckingham. He had used his intelligence contacts and his own cunning to build a successful publishing company. But this was not enough for the Carrs.

Sir William Carr was suspicious of Maxwell because of his Czech Jewish origins.

So News Of The World editor Stafford Somerfield wrote a front-page story lambasting Maxwell: “This is a British paper, run by British people… as British as roast beef and Yorkshire pudding… Let us keep it that way.”

Naturally, Rupert Murdoch got the deal. “Mr Maxwell called me a moth-eaten kangaroo. Well, I never got quite to that stage,” Murdoch told the press after his victory.

Maxwell had warned William Carr against Murdoch: “You will be out before your feet touch the ground,” he told Carr.

The Carr family, stupidly, feared the Czech Jew more than they feared the maverick Australian. It wasn’t long before Murdoch threw Carr out of the paper for good.

Robert Maxwell wouldn’t forget this experience. But he soon had a much bigger problem.

Pergamon Press was embroiled in a scandal after it became clear Maxwell had lied about the company’s profitability.

Robert Maxwell was kicked off the corporate board and sent into exile. He was painted as a crook in the British press. He lost his seat in the House of Commons in 1970.

It looked like it was all over for Maxwell, but he was soon planning his comeback.

By the end of the decade, Robert Maxwell was back in control of Pergamon and poised to take revenge on the British press and take the fight to Murdoch again.

He was a larger-than-life capitalist in his own right, but he never got over being outflanked by a man from Melbourne.

Captain Bob had come a long way from his start in life.

He was born Ján Ludvík Hoch into a dirt poor Orthodox Jewish family in a small Yiddish-speaking town in Czechoslovakia. Today, it is a part of Ukraine.

Yet the territory was annexed by Hungary in 1939 before Nazi Germany claimed it. Most of the Hoch family were sent to Auschwitz, while the future newspaper tycoon had joined the Czech army in exile.

Ján Hoch switched to the British army and later fought in the Normandy invasion. He was awarded the Military Cross for his record, but he soon had more than a nice medal.

Hoch changed his name to Robert Maxwell after the war and launched Pergamon Press in 1948.

Somehow Maxwell had developed ties to MI6 during his service. The British intelligence services bankrolled the launch of his publishing firm.

Even stranger still, Maxwell was soon connected to the KGB and published scientific materials from the USSR.

That same year Maxwell helped secure Czechoslovak support for Israel in its war for independence. Much of the Soviet bloc was supporting the Israeli government at the time and Czechoslovakia sent arms to aid the Jewish state.

To this day, people speculate about Robert Maxwell’s exact role with these different intelligence agencies. Some claim Maxwell was a ‘double agent’, or even a ‘triple agent’, playing each side against one another.

What is clear is that Robert Maxwell enjoyed friendly relations with these agencies for decades. He was held in high regard by Soviet leader Mikhail Gorbachev and right-wing Israeli Prime Minister Yitzhak Shamir.

As a media tycoon, Maxwell hawked his services to Eastern bloc dictators.

He published lengthy, flattering interviews with leaders such as Nicolae Ceausescu – for a massive fee – before the pamphlets could be distributed at embassies worldwide.

Robert Maxwell once tried to cajole John Pilger into writing a feature heaping praise on the Bulgarian Communist government.

Thankfully, Pilger was smart enough to avoid getting involved with Maxwell’s strange alliances.

“I became the Houdini of Fleet Street,” Pilger would later recall.

Maxwell’s ability as a chancer became legendary in his lifetime, and notorious after his death.

The British media called it ‘the Max factor’ jokingly. He was able to charm heads of state, national security leaders and bankers.

But, in the end, the Max factor was not enough to conceal the sheer scale of fraud that maintained the façade of his success.

Nevertheless, Captain Bob did get away with it all. He was a giant of con-artistry. But he was not the first and he will not be the last.

Photograph courtesy of the European Parliament. All rights reserved.

Not every media organisation can bear criticism, even self-criticism, but others require it to keep going. END_OF_DOCUMENT_TOKEN_TO_BE_REPLACED

Foucault once suggested that Clausewitz’s famous observation, “war is not merely a political act but a real political instrument” carried out by other means, be reversed, with politics made an extension of war. END_OF_DOCUMENT_TOKEN_TO_BE_REPLACED

Brexit will turn three on the last day of January, over six years since the 2016 referendum kickstarted Britain’s race to the bottom. END_OF_DOCUMENT_TOKEN_TO_BE_REPLACED