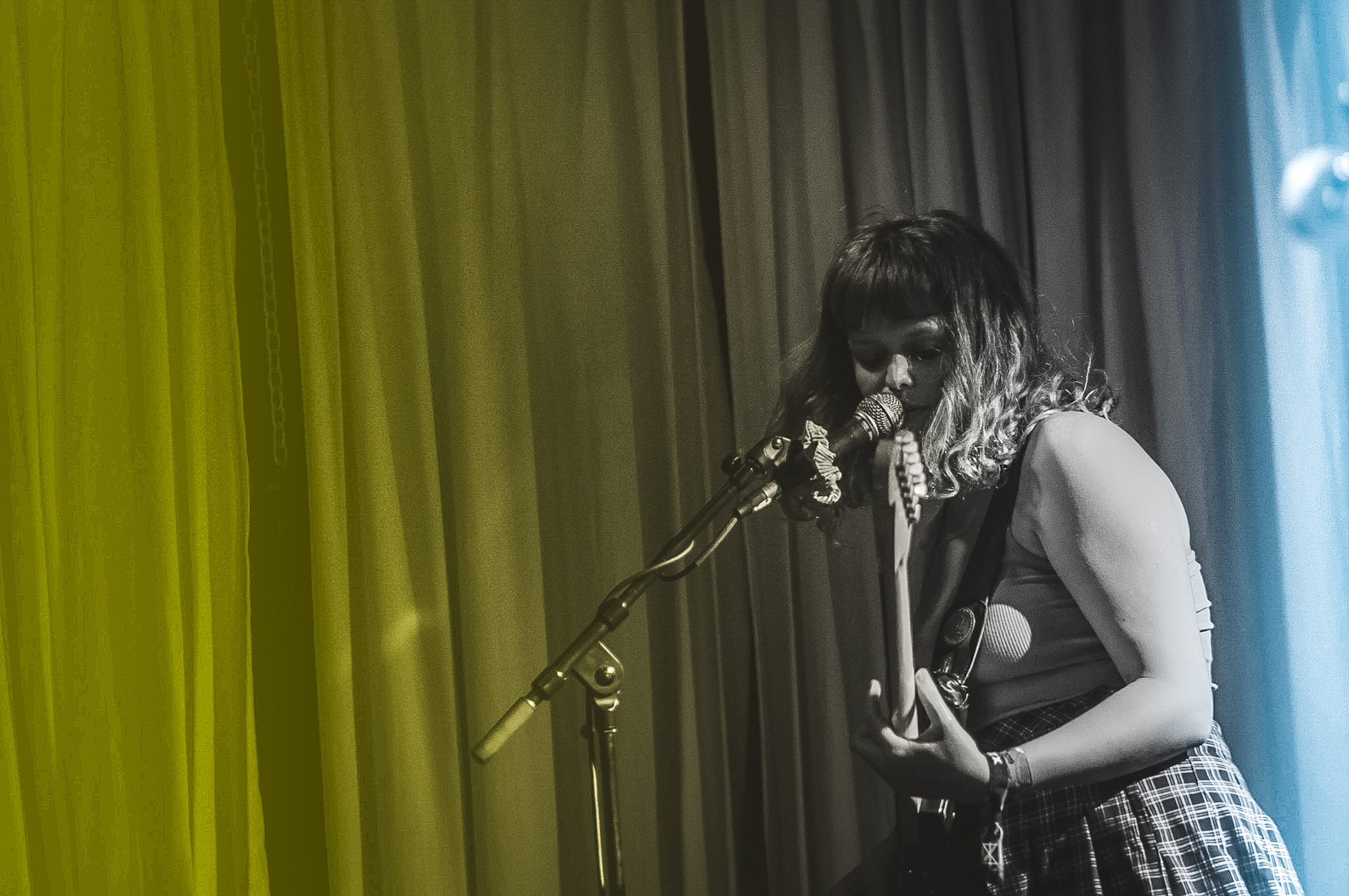 That’s why the record has served as precisely that for me, interrupting a pattern that was getting me down.

Sometimes listening to new music seems like a frustrating day at the beach. I will spend hours waiting to be swept away, but never quite catch a wave.

The more this happens – and lately it happens a lot – the more I worry that I have lost the capacity to experience that kind of euphoria.

Although I can still appreciate music intellectually, my heart just isn’t in it. Returning to old favourites is a remedy, reminding me that I can love as well as like.

But I am wary of indulging my nostalgia too readily. Because it is almost impossible to be a good critic once you’ve definitively concluded that things were better long ago.

That’s where bands like Pip Blom come in. No matter how simple the ingredients, no matter how familiar the recipe, the sincerity of the execution prevents their work from feeling dated.

Consider “Faces”, currently my favourite song on a record full of potential favourites.

It begins with four bars of the repetitive, chiming guitar figure that Wire pioneered on Chairs Missing, the instrument echoing the mid-tempo bass and drum.

Then the lead guitar enters, twining its way around that rhythmic core the way Carrie Brownstein’s does in the best Sleater-Kinney songs.

When the eponymous Pip Blom’s voice comes in, sadly ruminative, it seems like the song is developing into a post-punk ballad. When the chorus hits, though, the beat picks up and the guitars get louder, communicating the sense of being carried away.

The lyrics are not happy. “Faces” is clearly about someone in crisis. But the transition from verse to chorus gives the song a defiant feel.

It’s almost exuberant, as if that lost individual – Blom singing, as she typically does, in the first person singular – were finding herself in the act of musical expression:

Another day, it all feels so surreal
Was I just dreaming, or is this how I feel
Want to go back to how we used to be
Yes, I still love you
Not this version of me

Turning introspection into abandon is not easy. Yet Welcome Break achieves the feat over and over.

It also helps that Pip Blom reject the historian’s impulse. Even though their influences may be obvious to someone steeped in decades of listening, their music stands just fine on its own.

This is because the band assiduously avoids the sort of self-conscious quotation that signals a refusal to inhabit a song with total conviction. They are content to reinvent the wheel, regardless of how much time it takes.

That helps to explain why Welcome Break improves on their excellent debut, Boat, despite working similar territory. Pio Blom don’t need to pursue novelty, because they recognize that there is an infinite supply right where they started.

Serendipity has been radically transformed by streaming platforms. Even though it’s easier than ever to find culture that appeals to one’s taste preferences – including ones that are so precise as to be rare – it’s difficult for those discoveries to make a lasting impact.

A surfeit of possibility results in a dearth of actuality. Waves appear promising on the horizon, yet lacklustre when they arrive.

With Boat I got lucky. Wandering through my local record store two years ago, I was drawn to the album’s cover, which conveys a domestic minimalism in pastel colours that conjure the early 1980s.

Although I had no idea what the music on it would be like, that cover stood out sufficiently from its surroundings for me to buy it.

It didn’t take me long for the album to win me over: a few bars of a tinny beat like something from a cheap 1980s Casio played too loud; then a woman’s voice vining its way around it, off-balance, communicating the strain of trying to convey a confusing relationship; and then an insistent guitar that wobbles like a stretched-out rubber band on the verge of snapping.

Even though I had spent weeks stuck in sampling mode, hearing a few bars of a song on a streaming platform before moving impatiently on, I suddenly found myself intently listening to Boat. And then I did it again.

Eventually, I was able to assess the album more objectively.

The songs are not uniformly strong. And the sonic palate they share, while distinctive and compelling, can get monotonous after a while.

But Boat’s peaks were still high enough to make me forget the valleys.

I’ve been waiting eagerly for its follow-up ever since, hoping that it would fuse the album’s strong songwriting with the more reckless vibe of the singles Blom put out in the years prior to its release.

Welcome Break accomplishes that while being more carefully crafted than its predecessor. The music is tighter, yet feels looser.

Although I spent much of my youth gravitating towards classic rock by male artists, part of me was always drawn to the work of women who responded to their boundless sexism by expressing themselves as forcefully as possible, whether in music or words.

I’m sure my mother had a lot to do with my counter-preference since she had an ear for that kind of feminism.

I vividly remember the day when I came home with the 45 for Blondie’s “One Way or Another”, with which I had fallen madly in love. She came down into our basement to listen to it, excited by what she was hearing from the kitchen.

“I like it,” she declared in her curt Pennsylvania Dutch manner. “It reminds me of Nancy Sinatra’s ‘Boots Are Made for Walking’.”

In that pre-internet world, it was hard to track down the music that other people mentioned. I made a mental note to listen to the Sinatra song as soon as I could and compare it to Blondie. But it wasn’t until many years later that I got the chance.

When I did, I understood immediately why my mother had connected the songs in her mind, even though they deal with different subject matter.

They shared a kind of swagger, but one that implicitly repudiated the masculinist way in which that term is typically deployed. The same swagger that I now hear in the work of Pip Blom.

“These Boots Are Made for Walking” famously begins with the plucking of guitar strings going very slack, a sound that is repeated several times during the song.

It’s a powerful conceit, hearkening back to the history of “blue” notes, but also looking forward to other ways in which women would communicate their refusal to play by rules that place them at a disadvantage.

The way Pip Blom’s guitars refuse to stay in their proper place, preferring single notes to the chords of tradition; the way Blom’s voice comes in after the beat or lingers a bit too long; the way that the songs repeatedly refuse to reduce complex feelings to simple ones: all testify to how well suited the band is to take their place in a counter-history of rock that passes from Nancy Sinatra through Patti Smith, Liz Phair, and, yes, even Taylor Swift.

What seals the deal, though, is the simple fact that they aren’t trying to sound historical. If Pip Blom’s music was more self-aware, it would also have less impact.

Welcome Break is great because it breaks with the compulsion to prioritise seeming smart over having heart.

Korean-German philosopher Byung Chul-Han is the quintessential postmodern figure. Having to come to Germany to study metallurgy, he switched fields and mastered the argot of German philosophy. END_OF_DOCUMENT_TOKEN_TO_BE_REPLACED

François Truffaut’s  The 400 Blows is one of cinema’s all-time classics, the 1959 film that demonstrated how deftly a new generation of French critics could transform themselves into the filmmakers of la nouvelle vague. END_OF_DOCUMENT_TOKEN_TO_BE_REPLACED

Everyone has something to say about the violence at the 2022 Oscars, whose host called “the greatest night in the history of television”. END_OF_DOCUMENT_TOKEN_TO_BE_REPLACED