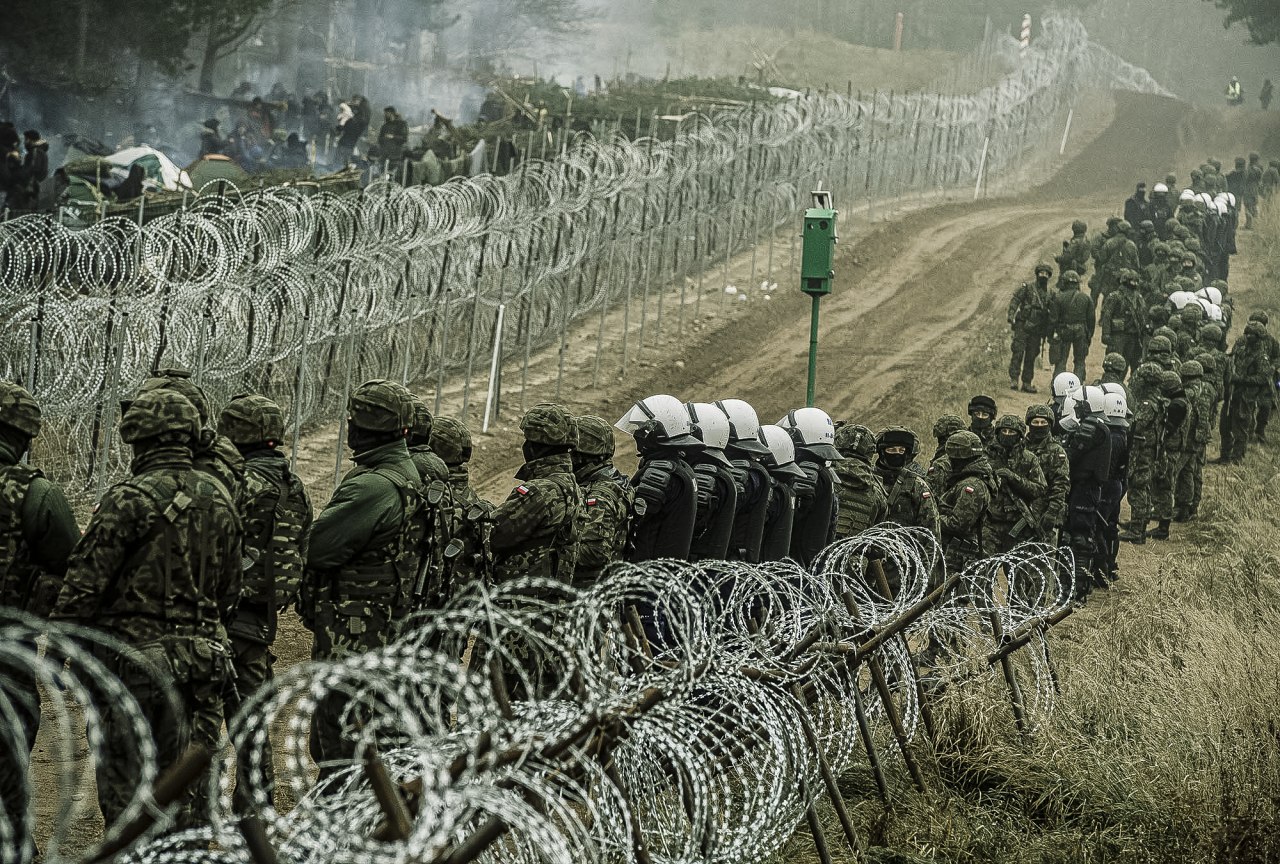 Snow also fell on the Polish-Belarusian border a few days ago. There, immigrants don’t look at the flakes through the windows.

People were lured to the border by cynical deception of a few thousand dollars, but at the cost of humiliation, mental torture, devastating health problems and – all too often – death.

At first, the package was simple: Money for a better life in a Western European Union country.

For most, it quickly became clear it was a scam. The refugees are just ammunition in several wars played out by Putin and Lukashenka, but Poland willingly joined in.

Real people are the helpless victims of these proxy wargames.

Lukashenka’s heart beats faster when he reads headlines about himself, that “the president of Belarus” has done this or that.

“So, the West recognized my victory after all!” The dictator rejoices in the sauna with a vodka. And there is snow in his garden, too.

Then Angela Merkel is on the phone. One can only imagine how flattered the Belarusian strong man is.

This is the nicest of possible farewells, he thinks – from the Queen of Europe herself!

To console the anxious critics of the outgoing German chancellor’s phone call, I would add that her call only legitimises Lukashenka’s power in his own eyes.

Very effectively: The president recently acknowledged that his support among Belarusians is now 90 per cent. Which he confessed to a BBC correspondent, in Moscow.

#Belarus: Lukashenko’s popularity has slightly improved. The persecution of critical media and civil society are definitely driving away alternative views on Belarus. Instead, state propaganda is exercising greater control over public opinion. 👇 https://t.co/ReugkXKskM

Lukashenka’s cartel of people smugglers, who are doing the business of a lifetime at his behest, certainly rejoice with him.

And in Poland the proxy war is being waged for several purposes: First of all, traditionally, it is about the competition on the right – about who will be the most radical and intransigent.  In the words of Ziobro, “only the weak succumb to pressure”.

So we are strong and uncompromising. We whistle uncompromisingly for the support of the European Union, while our prime minister seeks support separately from his EU partners.

Uncompromisingly, we don’t talk to Minsk and Moscow at all – so we can criticise other leaders (e.g. Merkel or Macron) for “getting along with Putin and Lukashenko over our heads”.

By doing so, we play off one of the United Right government’s favourite political topos – “betrayal of the West” – when, after all, there is “nothing about us without us”.

The government is also uncompromising towards the weak and defenceless – the aforementioned immigrants lured by visions of a safe, dignified life, who are meanwhile denied basic human rights.

Invariably the government also plays uncompromisingly towards us, journalists and citizens at the same time.

The Polish constitution “guarantees the freedom of the press and other social media”, while the Press Law states that “the press may not be hindered from collecting critical materials or otherwise suppressing criticism”.

According to the constitution, every citizen also has the freedom to obtain information. But what if this information does not exist because journalists are denied access to the Polish-Belarusian border?

After the takeover of public media by the government, after the pacification of private Polsat TV, after the state oil giant Orlen bought out the regional and local media, under conditions of financial censorship and the vilification of editors critical of the government, another bridgehead of freedom is now being taken away from the media at the frontier.

Recently, three journalists entered the state of emergency area at the border by mistake, because it was not marked. As a result, they spent twenty-four hours in custody, with no food or cleaning supplies, and no way to contact anyone. The next day they were brought to court in handcuffs.

One of the detainees, ARTE reporter Ulrike Däßler, later said that she had been a correspondent in Iraq, Sudan, South Sudan, Libya, Tunisia, Ivory Coast, and Mali – and that she had never been treated the way she had been in Poland.

The 3 journos were dragged out of their car, cuffed and handed over to police.

Treating journalists like criminals is meant to have a chilling effect, to make them afraid to do their jobs. And excessive aggression can always be blamed on a particular soldier or policeman.

Well, you can if you don’t have an independent (also financially) free media that is allowed to do its work.

I wanted to end with the media, but I can’t help but mention the people who help immigrants at the border, the activists, medics, lawyers, translators, and other people of goodwill. They, too, are having their jobs made difficult.

People who help immigrants are humiliated and intimidated. Relief has become criminalised.

But this isn’t about the Polish authorities fearing something being leaked to the public (after all, we can see the Teflon-covering of the government), nor about more refugees applying for asylum.

It’s about showing that everything will be as the government says. Not a step backwards.

Brexit will turn three on the last day of January, over six years since the 2016 referendum kickstarted Britain’s race to the bottom. END_OF_DOCUMENT_TOKEN_TO_BE_REPLACED

Be careful what you wish for. It may be a cliché, but it’s one the Greens are learning all over again. END_OF_DOCUMENT_TOKEN_TO_BE_REPLACED

Before his arrest, Andrew Tate was just another influencer with bad politics. END_OF_DOCUMENT_TOKEN_TO_BE_REPLACED