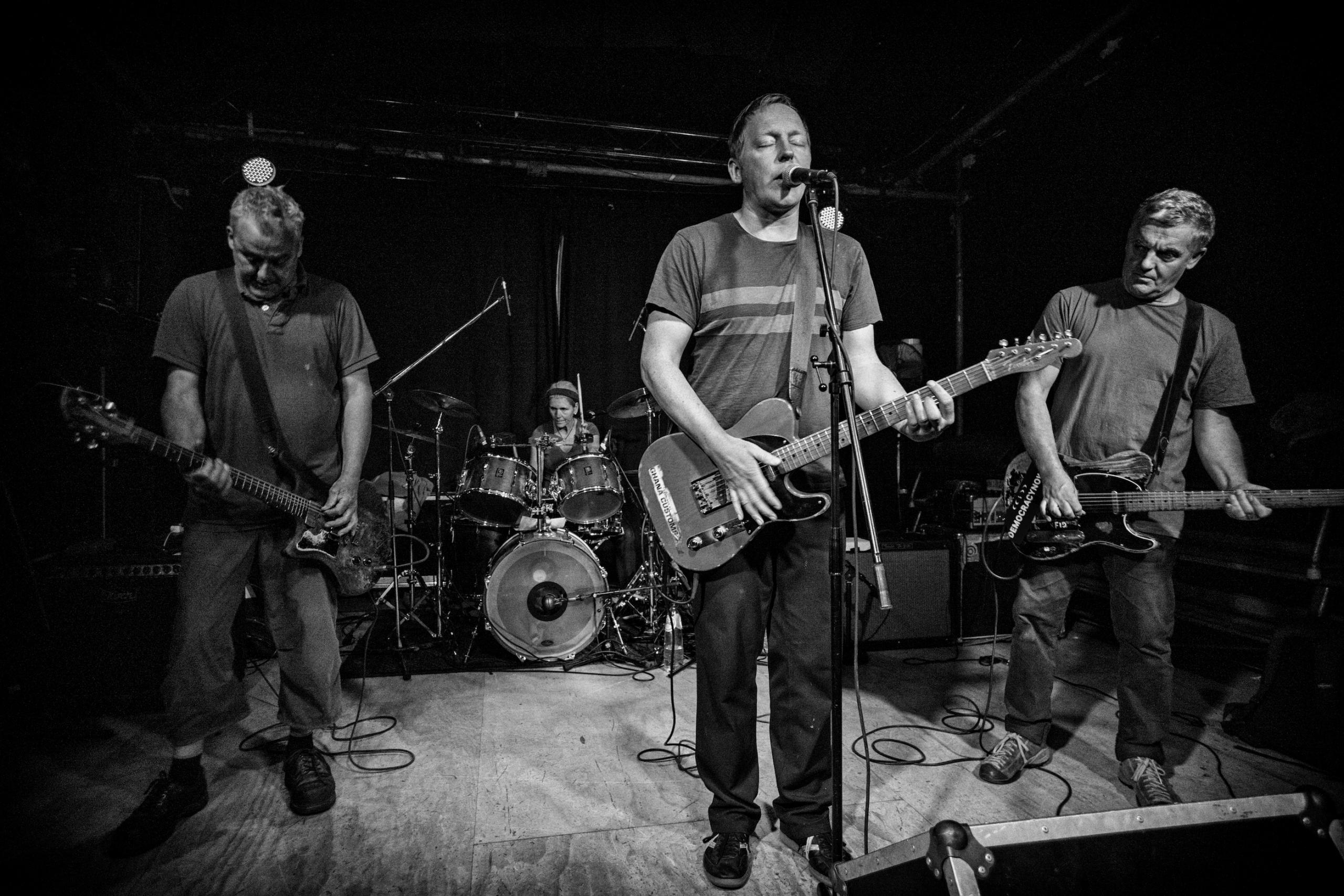 Instead of coming before, it comes alongside, distinct from the latest fashion, yet no less au courant.

Part of the reason for this persistent freshness is the Dutch band’s willingness to experiment vigorously within the confines of their propulsive, rhythm-forward approach.

Part of it has to do with their insistence on foregrounding collective action over individual expression, even if it means integrating new personnel.

And part of it comes from the ideological clarity that underlies their decision-making, rooted in the belief that anarchism represents a practical solution to the world’s ills.

Because they aren’t simply aiming to please, The Ex end up delivering more pleasure than bands with less lofty aspirations.

Like other self-consciously political groups that followed in the wake of punk – The Clash, Gang of Four, The Mekons – The Ex seem to be liberated by their refusal to just make music for its own sake.

This is especially clear on their newly reissued 1983 debut Dignity of Labour, which somehow turns a bleak subject – the closing of a factory – into eight sinewy tracks, identically titled, that never seem preachy.

One of the best is “Sucked Out Chucked Out, Pt. 5”, which combines what sounds like water dripping with accordion swells and an ominous pattern played on the upright bass. The song could easily be mistaken for one of the numbers Angelo Badalamenti composed for David Lynch’s films.

Another standout is “Sucked Out Chucked Out, Pt. 7”, on which a trebly guitar periodically slashes its way through a stuttering rhythm section, like an electric shock delivered to a heart that has become too self-conscious to perform properly.

Throughout the album – originally released as four 7-inch singles – spoken-word lyrics detail the demise of the Van Gelder paper factory and the damage done to its workforce in a disassociated monotone.

Although The Ex definitely fall within the ambit of punk, these vocals stand in stark opposition to the energetic growl of Joe Strummer and the sarcastic snarl of John Lydon.

This aesthetic decision may have been politically motivated. The band clearly wants to pay tribute to the workers who lost their jobs and honour the dignity of their labour. Yet they consistently push to elevate this specific situation into an abstract problem.

Although the music sounds lively, this quality does imbue it with a certain datedness. Every time GW Sok repeats “this is the machine age”, we are reminded of how much has changed for the working class in the intervening years.

The world created by the Industrial Revolution was a lot easier to perceive in the early 1980s than now, not because things have improved for labour, but because of who, or, in many cases, what is doing the work.

We still contend with subordination to machines. But whereas they once supplied the brawn, they now provide the brains as well. Ours is an era of “machine learning”, with human beings rendered superfluous when they can no longer serve as worthy instructors.

Yet Dignity of Labour still rings true on an existential level. If anything, factory workers are more replaceable than ever, their talents and experience devalued by competition in a global marketplace where dignity functions as a structural impediment.

In memorializing the way in which one particular group of workers were rendered expendable, The Ex prepared us for a future in which factories would be run by machines, not to mention our social lives.

The logic of neoliberalism making its presence felt at the beginning of the 1980s is still with us, only with a working class that has been so thoroughly “sucked out” and “chucked out” as to barely remain a viable demographic entity.

What are we to make, then, of Dignity of Labour’s percussive exuberance, the sense its eight tracks conjure of a world where mind-numbing regularity has given way to perverse possibility?

Even as The Ex were mourning the impending obsolescence of a certain kind of factory, they acknowledge that freedom could be excavated from its ruins.

The Ex are angry at the degradation of labour exemplified by factory closures. Yet that anger is lined with hope for a future in which workers are able to take control of their lives, no longer slaves to the machine.

Although we are clearly a long way from that potential being realised, the spread of automation at least makes it easier to imagine it.

By not only documenting a factory’s demise, but actually going inside its walls to make music in the ruins, Dignity of Labour crafts a vision of a world in which labour is freed from compulsion and redirected towards creative pursuits where we take control of the beat instead of being beaten down by the ones imposed on us by machines.

Dignity of Labour is available in Europe from Ex Records. Photograph courtesy of Guido van Nispen/Wikipedia. Published under a Creative Commons license.

The 1970s was a decade of broken dreams. The end of the postwar boom brought to a close the era of middle-class liberalism in Europe and North America. END_OF_DOCUMENT_TOKEN_TO_BE_REPLACED

Serbian director Dušan Makavejev’s 1968 film Innocence Unprotected manages both to explore the legacy of wartime trauma seriously and to make fun of itself in the process.  END_OF_DOCUMENT_TOKEN_TO_BE_REPLACED