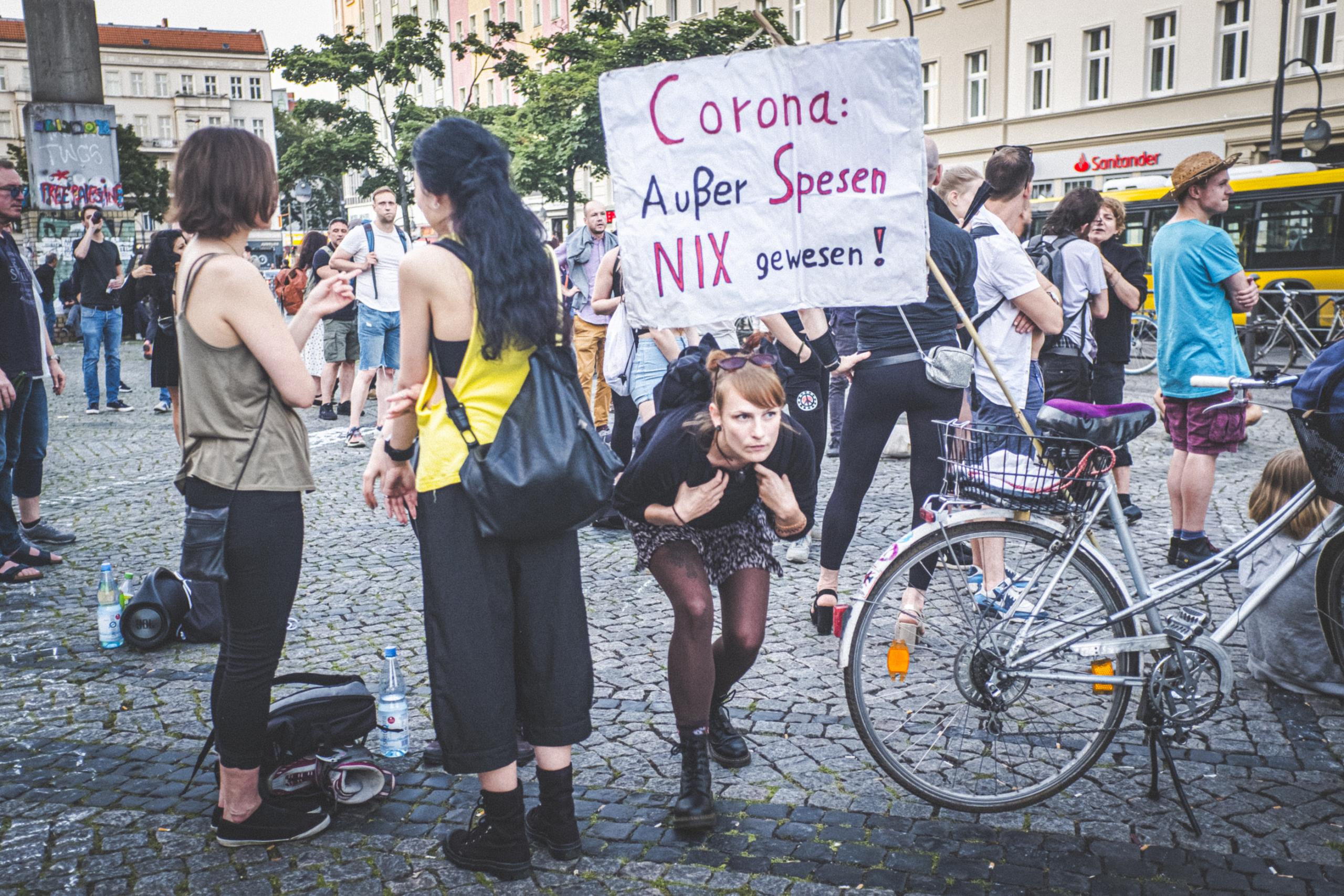 Corona is nothing but expenses. Virus denial placard, Berlin.

The immigration official widened his eyes. “Are you serious?” he asked, sounding genuinely surprised.

“Yes, we don’t feel safe there anymore,” I responded. “The government can’t seem to bring the Coronavirus infection rate down, and racist violence is skyrocketing.”

“I see,” said the official, as he cleared his throat. “We’ll give you a six-month visa, as you both come from allied states. But you will have to file your asylum request with the interior ministry.”

I don’t always remember my dreams. But this was one that I recall in detail. We’d just gotten booster shots at a Catholic relief centre while on Christmas holiday in Italy, so it made sense.

With a heavily criticised first-quarter vaccine shortage forthcoming in Germany and skyrocketing infection rates in our hometown of Berlin, we decided to get boosted before flying back.

Even though foreign visitors have the right to get vaccinated in Italy, our search for a facility that would provide one proved difficult.

The only place that would take us turned out to be a relief organisation focused on refugees, in Torino’s migrant heavy Porta Palazzo neighbourhood.

Hence, the refugee part of my dream. I’d reworked that element of the experience we’d just had getting vaccinated, applying for refugee status somewhere outside of Germany.

The truth is we were like refugees, looking for support we couldn’t easily find at home. We’d had to wait five months for our first vaccinations due to an initial shortage, and were terrified another wait might kill us.

Still, the asylum request was a bit over the top. If you know anything about German history, both recent and twentieth century, it was a dream laden with irony.

Both Jews, and decade-long residents of the country, the act of applying for asylum somewhere else, because of government mishandling of the Coronavirus, is a loaded gesture.

On the one hand, it communicates the idea that Germany is no longer a safe country. If it can’t manage its own healthcare and ensure the wellbeing of its citizens, why continue living there?

On the other hand, it expresses the anxiety minorities feel about their safety under the pressure of the COVID-19 pandemic, the right-wing forces it has unleashed, and their renewed Antisemitism.

During the years we’ve lived in Germany, no crisis in recent memory has availed itself to open Judeophobia more than the Coronavirus crisis.

It far exceeds the Soros-cum-globalist scapegoating that followed the 2015 refugee influx.

From Neo-Nazis sporting yellow stars claiming they’re the new Jews, persecuted by vaccine-armed fascists, to conspiracy theorists pinning the pandemic on us, our footprint vastly exceeds our presence.

That Israel, routinely praised in the German press, has done a much better job in managing the virus, only underlines the rightwing anxiety that COVID-19 is a disease invented by Jews to enslave Germans.

It’s enough to make you feel uprooted from your adopted home. Hence, the anxiety expressed in my dream, and why, under the circumstances, it comes out like this.

The fact that a state with such a great healthcare system, and pharmaceutical industry, has difficulty both delivering vaccines to its citizens and convincing them to get them, is instructive.

I can’t tell you how much worry we had to live with waiting to get assigned vaccinations, by the health authority in Berlin. My assignment never came, though my wife’s appointment eventually did.

In her case, she still wouldn’t have gotten her first round of injections before September of last year.

If it weren’t for a journalist friend who found a physician in the former communist East, who had acquired surplus AstraZeneca shots, I might not have gotten my vaccinations before Christmas.

Sure enough, it turned out to be an Arabic-speaking practice, in which most of the patients were from the Middle East, and the nurses were wearing hijabs.

The last name of the head physician is shared by a late Israeli actor, who had a Palestinian Christian father, from Nazareth. I wondered whether he came from the same family.

I marvelled at the irony of being Jewish migrants cared for by their Muslim equivalents, in faraway Marzahn, a borough long associated with Neo-Nazis. It made perfect sense under the circumstances.

No matter how hard we tried to get vaccinations from physicians near our home in Neukölln, we were repeatedly turned down, told it would be months before they’d have enough to share.

This was our only option, and one referred to us by a British Jewish colleague, no less. It was especially galling knowing how much easier it had become to get vaccinated in Israel and the US.

I worked hard not to indulge these comparisons publicly, because my wife and I have had good reasons for living in Germany over the years, and not our home countries.

Given the political issues which afflict both Israel and America, there are a lot of arguments for living somewhere else, not least for quality of life factors, with Europe easier on the less affluent.

Still, one cannot over-emphasise the extent to which the Bundesrepublik has been destabilised by the Coronavirus crisis. Hence, the continuous protests and far-right organising around it.

Lots of political analysts miss this aspect of what Germany is going through right now. They can’t fathom the upheaval that the country is undergoing and how it’s eroding its appeal.

Leave it to minorities to experience the worst side of this, and why they’d be the sorts of people who would fantasise about being uprooted, despite how much they appreciate the country.

When we first moved to Berlin, our apartment was broken into several times, but nothing was stolen. Still, our papers had clearly been gone through and photographed.

I remember calling a security official abroad, and telling them what had happened. It was the height of the NSA scandal, when the press was full of stories about the end of privacy.

“They probably aren’t Nazis or fascists,” I was told by my contact, who had always been cautious about our move to Germany.

“Just don’t be surprised when they do come back. It will be the stuff of nightmares, for sure,” he said.

While I wouldn’t qualify my dream as a nightmare, the situation it reflects is definitely one for Germany.

Not every media organisation can bear criticism, even self-criticism, but others require it to keep going. END_OF_DOCUMENT_TOKEN_TO_BE_REPLACED

Foucault once suggested that Clausewitz’s famous observation, “war is not merely a political act but a real political instrument” carried out by other means, be reversed, with politics made an extension of war. END_OF_DOCUMENT_TOKEN_TO_BE_REPLACED

Brexit will turn three on the last day of January, over six years since the 2016 referendum kickstarted Britain’s race to the bottom. END_OF_DOCUMENT_TOKEN_TO_BE_REPLACED