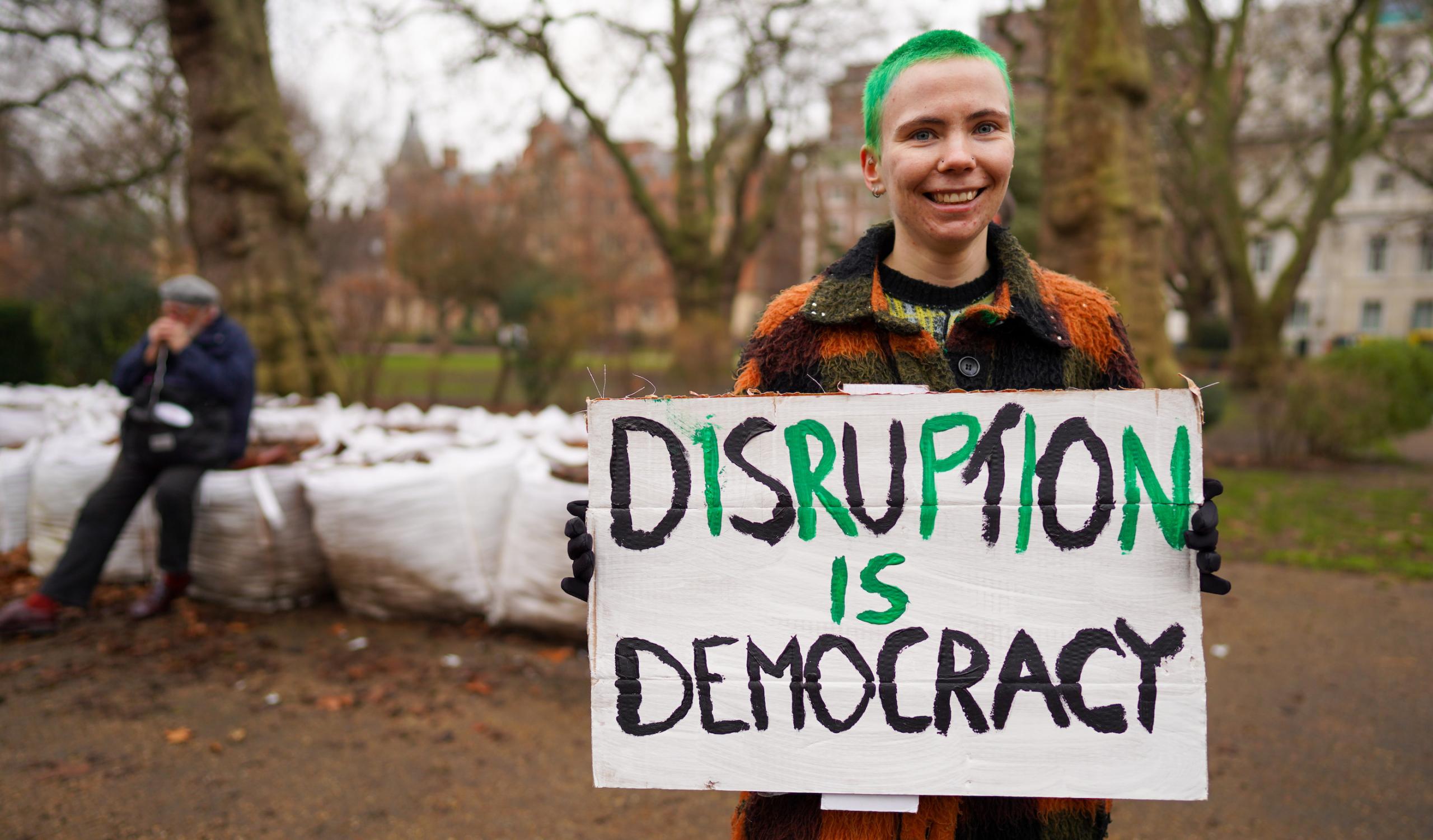 Walking into the square, I encountered socialists handing out newspapers and pamphlets, standing at stalls.

Every sect was present, from the Alliance for Workers’ Liberty to the Revolutionary Communist Group.

However, there were many people who were not seasoned activists or members of hard-left groups.

I spotted Gypsy/Travellers rights’ placards and even a few anti-vaxxers.

There was a large contingent of women dressed as Suffragettes sporting yellow sashes draped over their shoulders.

One of them explained that they were not an organisation and had only begun preparing to participate a few days before.

The demonstrators held up many different banners. I saw many shades of anticapitalist red, but also religious groups and single-issue campaigners.

Extinction Rebellion (XR), Stop the War, trans activists and a multitude of anti-racist groups were marching together.

It was a slow procession stretching two miles through busy roads. However, it was a hopeful sight.

Thousands of people had come out on a winter’s day to oppose the Johnson government and its attack on civil rights.

What united all these demonstrators is the Police, Crime and Sentencing and Courts Bill, which is about to become law.

This will hit all campaigns that depend on street-level rallies and marches to build support.

The Conservative government is betting on the House of Lords to push ahead with the innocuous-sounding bill.

Yet the impact of the legislation will be to empower the police to curtail the freedom of protest and assembly.

Home Secretary Priti Patel is claiming the power to ban protest if the demonstrations are deemed “seriously disruptive”.

This includes ‘noisy’ protests, but it specifically singles out forms of direct action.

This is an attack against Extinction Rebellion.

XR protesters have blocked roads to stop the right-wing press from distributing newspapers and have glued themselves to buildings.

Specific individuals could be banned from taking part in demonstrations.

It doesn’t stop there.

Perhaps the worst aspects of the bill are the draconian measures targeting Gipsy, Roma and Travellers communities.

The police will be granted extensive powers to target them.

The cops will be able to seize the caravans of Roma families and make them homeless, thereby making them vulnerable to deportation.

This is yet another front in the hostile environment. This is how police states start.

The law and order crowd, of course, love the policing bill.

They yearn for the violence of the state to be turned against those they hate most and take enormous pleasure in the suffering of invisible minorities and individuals.

So long as someone else is getting crushed somewhere, then maybe our own suffering is justified.

This is why the Tories are only in trouble because Boris Johnson was caught out.

BoJo had attended parties and held parties at Number 10, while people were denied the right to visit dying parents and grandparents.

Yet the death count of the pandemic itself has not hurt Team Johnson.

If the government had managed to keep up appearances, the PM would still be very popular.

This is why the Tories will likely stagger on and maybe even win in 2024.

The Politics of Scandal

For years and years, Boris Johnson seemed immune to scandal and crisis. Somehow, the premier has gone from the outsider to the insider.

But Johnson has lost his populist appeal by presiding over lockdowns that do not extend to his inner circle.

However, the scandal is really that Johnson got caught. The same goes for Dominic Cummings and his driving test at Barnard Castle.

The scandal isn’t really about the actual acts themselves.

We can do better to unpack what ‘scandals’ really mean. Scandals are framed in the media as if they are a break with normality.

This leads to troubling conclusions. Partygate, for example, is a scandal, but not the deaths of over 150,000 people to COVID.

The real scandal isn’t what the Conservative Party has done to this country for more than a decade.

Austerity, cash for influence, privatisation, Windrush, the hostile environment and the suspension of Parliament. None of this counts.

That’s before we even get to the pandemic.

Yet this is manufactured outrage. The leaks are clearly being timed to bring down the Boris.

Maybe we’re seeing the British ruling class for what it really is. Maybe we shouldn’t crave the old days when the political class presented itself as upstanding, selfless public servants.

The truth was always very different. Nevertheless, a lot of people are asking why have we fallen so far from the days of such pleasant appearances.

The fact that this country is governed by those who own it is lost in this strange fondness for hypocrisy.

Long after Boris Johnson is gone, the British elite will be living by its own rules while the rest of the country has to make do with a lower standard.

Too many Tory voters will continue to believe this is the best possible situation because house prices are still rising.

In the meantime, the United Kingdom will get more dystopian every year.

Our only hope is that there will be a backlash against the power grab that has taken place during the pandemic.

Freedom isn’t something handed down from above.

Brexit will turn three on the last day of January, over six years since the 2016 referendum kickstarted Britain’s race to the bottom. END_OF_DOCUMENT_TOKEN_TO_BE_REPLACED

Be careful what you wish for. It may be a cliché, but it’s one the Greens are learning all over again. END_OF_DOCUMENT_TOKEN_TO_BE_REPLACED

Before his arrest, Andrew Tate was just another influencer with bad politics. END_OF_DOCUMENT_TOKEN_TO_BE_REPLACED