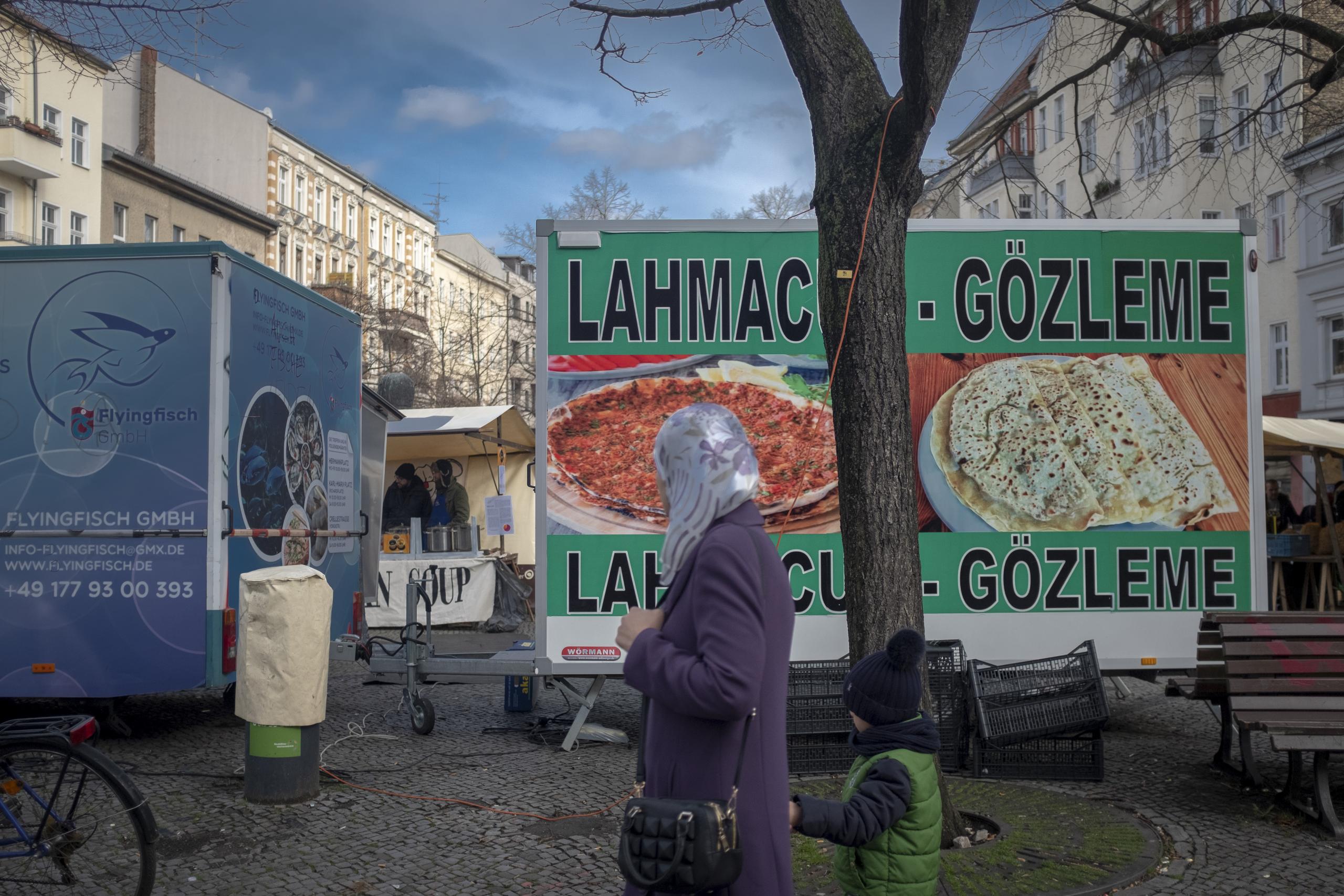 You are what you eat. Turkish fast food, Neukölln.

Combining the music of elder statesman Ozan Ata Canani, whose lyrics distil Enlightenment values to a moving essence, with DJ Shantel’s au courant beats and synthesizers, the opening track, “All People On This Earth” forcefully impresses upon us that the struggles of Germany’s Cold War minorities continue to this day.

It’s impossible to produce a more basic or universal message. Yet we continue to forget it over and over at our peril. If the project of Enlightenment remains unfinished, maybe that’s because we impute different motives to other people than we discern in ourselves.

Last year’s video for a rock version of the song not remixed by Shontel — a third, acoustic one bookends the compilation — cleverly reinforces this point by showing us a diverse selection of people presumably listening to the music on headphones. Despite their auditory isolation, which serves as a figure for the differences that prevent us from coming together, we recognize the universality of the song’s message. The opening line echoes Beethoven’s “Ode to Joy” for a reason:

Culture frequently divides us. Figuring out who does and doesn’t fit into a particular demographic category is a lot easier when you see what food they like to eat, what clothes they wear, and what music makes them feel at home, wherever they happen to find themselves.

But culture paradoxically offers the possibility of recognising what we have in common with others, despite our obvious differences. Although this process is inevitably complicated by misrecognition, especially of the exoticising sort, it provides more opportunity for meaningful connection than abstract platitudes alone.

That’s what makes this track so powerful. Although the lyrics profess typically universal aspirations, the music that accompanies them is resolutely rooted in a particular culture and, what is more, one that has still not been fully integrated into German society, despite managing to subsist within it since the Wirtschaftswunder (economic miracle) of the 1950s.

Indeed, that’s what makes all the tracks on this compilation so brilliant. Like its predecessor from 2016, Songs of Gastarbeiter 2 manages to both delight and instruct. This is a great credit to AYKU — author Imran Ayata and artist Bülent Kullukcu — the team that put both albums together. The songs are catchy and deeply evocative. And they remind us that the vast majority of Germans regarded fellow inhabitants of the BRD and DDR during the Cold War as permanent outsiders, excluded from the possibility of ever becoming German enough to belong.

This was true even though many of those Germans were themselves not born in what qualified as Germany after 1945, exiled from lands to the east and southeast such as Poland, Czechoslovakia, Yugoslavia, and Romania.

The conviction that a national identity should be defined by the specious category of “blood” rather than the abstract principles on which modern states were supposedly founded did not die out with the Third Reich.

On the contrary, it survived both years of Denazification and the reckoning that the Student Movement supposedly forced many older Germans to have with their actions before 1945.

While some intellectuals and educators, such as Micha Brumlik, tried diligently to reimagine the BRD as a multicultural nation in the 1970s and 1980s, they had made depressingly little progress prior to reunification. And the incorporation of the former DDR set those efforts back.

Because the East German regime had spent four decades perpetuating the fiction that it was the land of the “good” Germans who had resisted Hitler from the beginning, its youth didn’t receive the historical instruction that had at least managed to raise consciousness about the Holocaust.

There is only so much that a book, film, or record album can do to make people rethink their most deeply held convictions. Unless they demonstrate a willingness to change, to better themselves in ways that benefit their communities and nation, reeducation efforts are bound to fail.

What records like Songs of Gastarbeiter Vol. 2 can help with, however, is pushing those individuals who already feel a desire to connect with people from different backgrounds to reflect on those feelings.

Amid the sort of soundscape that centuries of Orientalism taught Europeans to fetishise, the flip side of their fixation is made clear: Chancellor Kohl and Bavarian CSU leader Franz-Josef Strauss want to expel foreigners from German soil.

While defenders of Kohl might claim that this is an unfair characterisation, as the standard-bearer for a coalition that did very little to realise the promise of multicultural Germany the erstwhile chancellor bears responsibility for not making inhabitants of Turkish descent, many of them born in Germany, feel welcome.

In the context of the song, though, the names of these politicians stand in for any and all Germans who might enjoy eating Turkish food or vacationing along the coast of Turkey, but refuse to regard their Turkish neighbours as legitimate members of their community. If the song activates listeners’ tendency to exoticise, it does so to help estrange them from what is familiar.

Although Songs of Gastarbeiter Vol. 2 sustains the first volume’s interest in postwar West Germany’s most significant ethnic minority, it also makes a point of focusing on guest-workers with other national origins.

Tony y Los Santos’ “Trico Trico Tra” thematises the toll of labour, but insists that “vamos a cantar” and “vamos a bailar”. Dimensión Salvo brings a classic 60s sound to “Lo que no tengo”. And another Shantel remix gives the classic Greek sound of Prosechòs a vibrant update.

The most surprising selection is probably “Cherie” by the East German duo Bayon, which fuses a Western rock idiom with the Cambodian heritage of Sonny Thet, who stayed in the DDR after returning home became impossible in the 1970s

It’s a useful corrective to the impression that German guest workers were mostly from Southern Europe and the former Ottoman Empire. And a damned fine jam, too, somewhat recalling the aesthetic approach used by Cornershop in the 1990s.

All in all, Songs of Gastarbeiter Vol. 2 is a most impressive achievement. The album manages to be consistently interesting from a musical standpoint, without ever losing sight of its potential to provide something more than music.

It’s as if AYKU were acknowledging the not-so-secret lesson of the Friedrich Schiller poem that Beethoven set to music. It doesn’t read “Alle Menschen sind Brüder” (All people are brothers), as if that were a statement of fact, but “Alle Menschen werden Brüder (All people become brothers), pointing us towards a future that has not yet been achieved. There was work to be done then. There is work to be done now. And projects like this have an important part to play.

Krzysztof Kieślowski’s 1976 film The Scar, which chronicles the construction and operation of a large chemical factory, breaks many of the rules that had governed narrative cinema since the silent era. END_OF_DOCUMENT_TOKEN_TO_BE_REPLACED

The Russian government is awarding prizes to Macedonian writers. END_OF_DOCUMENT_TOKEN_TO_BE_REPLACED

The 1970s was a decade of broken dreams. The end of the postwar boom brought to a close the era of middle-class liberalism in Europe and North America. END_OF_DOCUMENT_TOKEN_TO_BE_REPLACED