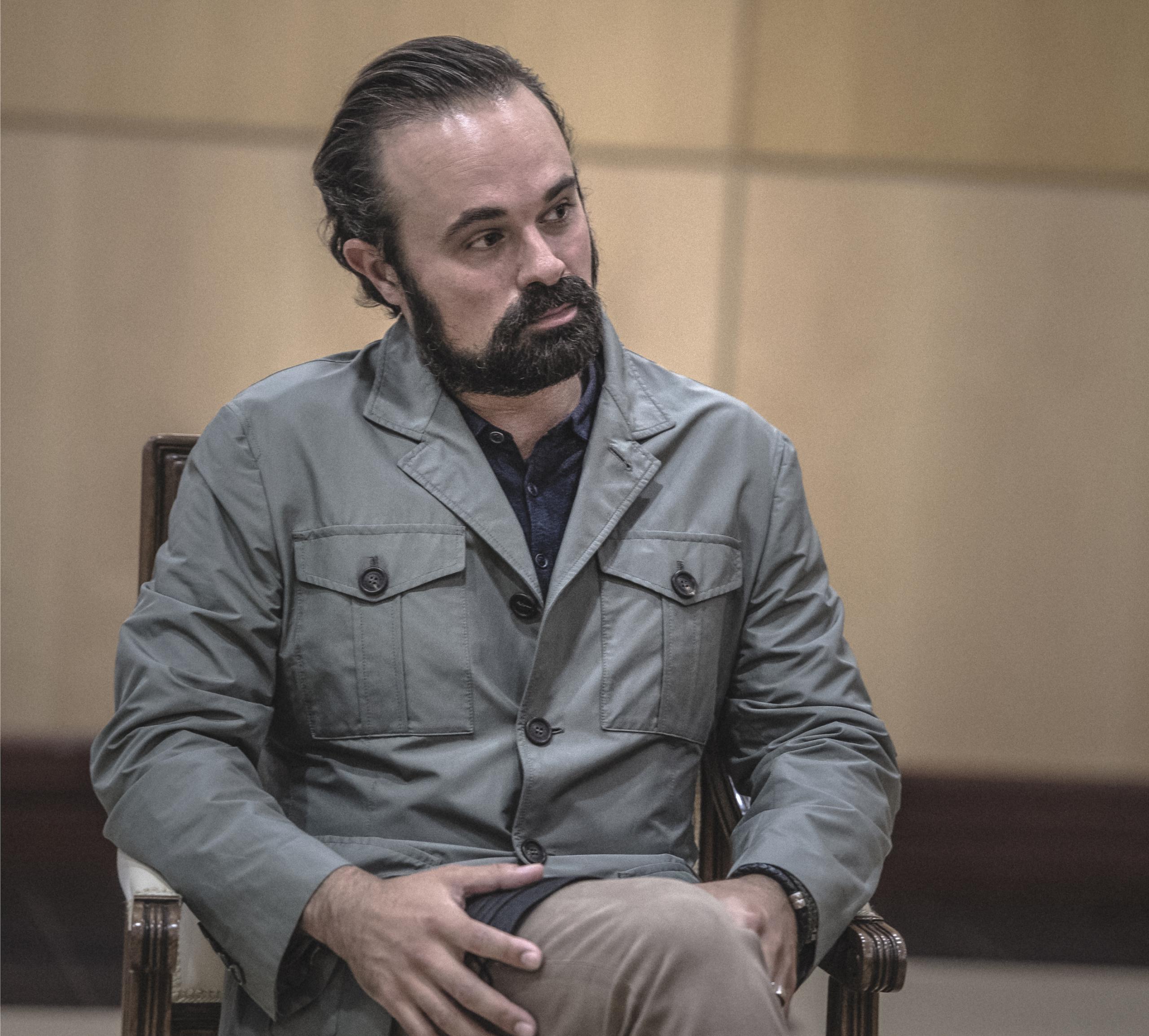 You might expect to see a deer. You’d be right.

But you wouldn’t expect to come across the home of a Russian press baron.

In this case, you’d be wrong.

Stud House is one of the places Evgeny Lebedev is content to call home.

The mansion is a Grade II listed building. It was constructed in the early 18th century to serve as the residence of the Master of the Horses, a position held by royal favourites.

“Stud House was named after me,” Lebedev once said.

Lebedev bought the house in 2007. He quickly set about renovating its interior and restoring its grounds, favouring a lush, green look over tarmac. It was a status decision.

He hosted former Soviet premier Mikhail Gorbachev at the house in 2009. It was a grand gathering, where Lebedev held court in black tie and tails. The event was a gala dinner for the Raisa Gorbachev Foundation.

Then-Prime Minister Gordon Brown’s wife Sarah was at the dinner. The cultural elite was on show. JK Rowling and Vanessa Redgrave were also in attendance.

These were the best years for Russian oligarchs to rub shoulders with the powerful and the famous.

The links between the Lebedevs and the political elites of Russia and the UK should not be played down. Few people have managed to keep on the good side of the West and Russia for so long, yet those days may be over.

Now that all things Russian are treated as suspect, Evgeny Lebedev has naturally come under scrutiny for his media holdings and his political connections.

Even Boris Johnson might be starting to finally regret attending parties at Lebedev’s Italian castle.

Pre-empting the inevitable questions, Lebedev used the Evening Standard to publish a letter to the Russian president.

“As a Russian citizen I plead with you to stop Russians killing their Ukrainian brothers and sisters,” wrote Lebedev.

It’s not every day you read a letter from a press baron to a foreign head of state, but Evgeny Lebedev was not the first to use a newspaper as a personal platform.

Bob Maxwell did it. Cecil King did it. Lord Beaverbrook did it. So what’s different about Lebedev?

The British elite regarded rubbing shoulders with the Russian super-rich as a kind of ‘democracy promotion’.

The tale of Russian oligarchs coming to the UK is a capitalist love story. The collapse of the Soviet Union gave way to a vibrant, dynamic class of entrepreneurs – or so they saw themselves – who identified with the trappings of the British aristocracy.

The truth is that so-called ‘Londongrad’ is at the heart of the UK property bubble, a vector for endless growth. The official estimate of Russian financial assets in the UK itself is $3.5 billion, but the figure held offshore may be much higher.

An estimated $800 billion in Russian wealth is held offshore, including more than $87 billion stashed in the British Virgin Islands, the Cayman Islands, Jersey and Gibraltar over the last decade.

Lebedev is just one rich man in this picture. He officially became a lord on 17 December 2020 – thanks to a decision by his friend Boris Johnson. He became Evgeny Lebedev, Lord of Hampton and Siberia (yes, really), from that day on.

Lord Siberia is facing some difficult questions over his position in the House of Lords. Labour leader Keir Starmer has called for an investigation into his peerage. Yet it wasn’t long ago that Johnson claimed this kind of talk was “anti-Russianism”.

Boris Johnson insists he gave Lebedev the peerage because of his charity work and for saving two London media institutions.

After all, Lord Siberia raised more than £75 million for charity and spent £120 million on the Evening Standard and The Independent.

Arguably, the peerage was a mere ceremonial gift to an already powerful man.

The Evening Standard had supported Boris Johnson for more than a decade, and The Independent would back the Conservatives against Jeremy Corbyn.

The mistake is to read the Lebedevs as an outpost of Russian influence in the UK.

As a London media tycoon, Lord Siberia is a part of the British liberal elite, whereas his father has long tried to balance his allegiances in Russia.

Lord Siberia owes much of his success to his father.

Former KGB agent Alexander Lebedev built a vast business empire after he left the security services and bought a bank for $250,000. He would go on to own major stakes in Gazprom and Sberbank, as well as Aeroflot.

Alexander Lebedev and Gorbachev each have stakes in Novaya Gazeta, a courageously independent Russian newspaper. Lebedev the elder has managed to walk the fine line between criticising the Russian government and not clashing with Vladimir Putin.

The Putin government may have cynically concluded that there needs to be some dissent. Even Novaya Gazeta is a ‘necessary evil’. A certain amount of permitted dissent is good for maintaining a stranglehold on power.

The two men must have some understanding of each other, since they are both ex-KGB.

Putin was based in Dresden during the end times of the German Democratic Republic. He was desperately hoping his masters would send in the tanks in November 1989, while Lebedev was making contacts in London.

Somehow Lebedev had made enough money by 1995 to buy the National Reserve Bank. He had left the FSB just three years earlier.

By the late 1990s, both Lebedev and Putin were rising stars. One had gone into business and made a fortune, the other had gone into St. Petersburg politics and was about to succeed Boris Yeltsin as president.

Both of them saw opportunity in crisis.

Although Lebedev no doubt had an open door to Putin, the businessman preferred to keep a comfortable distance from the Kremlin. He ran for the State Duma on an opposition platform before defecting to Putin’s party and later breaking away once more. But Lebedev was far better at business than electoral politics.

He may have made the 2006 Forbes rich list – with a fortune of $3.5 billion – at the height of his fortune, but this kind of wealth is not risk-free in Russia.

The 2008 financial crisis would cost Lebedev much of his fortune since the value of Gazprom shares crashed.

Four years later, the Lebedev fortune was estimated at just over $1 billion. No small amount of money.

The Lebedevs still own many businesses worldwide, but the media is where they will have a legacy.

By the time Lebedev bought the Evening Standard, the Russian businessman had already invested in media organisations in his native country. The London media landscape was appealing because it was more secure than in Moscow.

One of his pet projects was Moskovsky Korrespondent, which ran from 2007 to 2008. It was set up to play the part of sister paper to Novaya Gazeta, but it wasn’t meant to be somehow.

The newspaper had a brief run because its coverage crossed the Russian president – specifically its reporting on rumours that Putin was leaving his wife for gymnast Alina Kabaeva. The paper was shut down a week later.

Despite the 2008 crisis, Alexander Lebedev was back in London looking for new ventures. The Evening Standard was losing between £10 million and £20 million a year, and The Daily Mail Group was looking to sell the failing paper.

Snapping up the Evening Standard for £1 with promises to invest millions, Lebedev put his son Evgeny in charge of the organisation.

Alexander set his son on the path to great influence in the UK. The two of them were once a double act, but now Evgeny handles the London business while Alexander is back in Russia. They may not be able to play this game for much longer.

The Lebedevs had property in Crimea and supported (as most Russians do) the 2014 annexation of the territory. The son may have taken his stand against the full-scale invasion of Ukraine, but the father has gone quiet.

The last thing Alexander Lebedev tweeted was a link to an Independent article calling on the West to wean itself off of Russian money. This was on 23 February, the day before the invasion.

Once again, Lebedev is living through tremendous upheaval. He made the prescient move of investing heavily in cryptocurrencies in 2021 and runs a financial company specialising in this market.

The crypto trade is now one of the ways the rich can bypass international sanctions against Russia. Unless the world cracks down on Bitcoin, there will be plenty of money to be made. A new opportunity may have arrived.

Not every media organisation can bear criticism, even self-criticism, but others require it to keep going. END_OF_DOCUMENT_TOKEN_TO_BE_REPLACED

Foucault once suggested that Clausewitz’s famous observation, “war is not merely a political act but a real political instrument” carried out by other means, be reversed, with politics made an extension of war. END_OF_DOCUMENT_TOKEN_TO_BE_REPLACED

Brexit will turn three on the last day of January, over six years since the 2016 referendum kickstarted Britain’s race to the bottom. END_OF_DOCUMENT_TOKEN_TO_BE_REPLACED