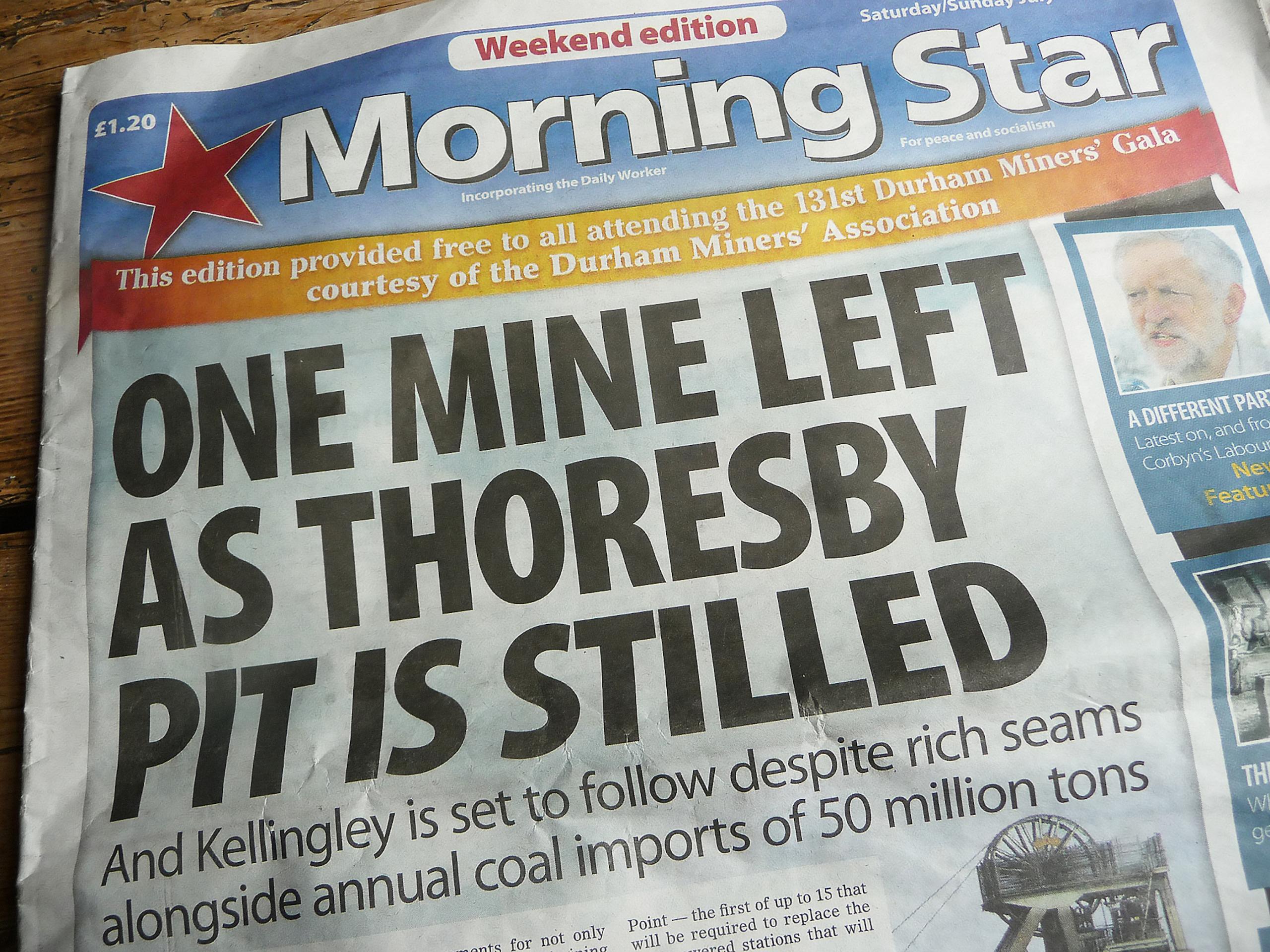 The newspaper’s name is displayed on a black plaque with red stars on either side, framed by graffiti.

This is the home of the Morning Star, the longest-running socialist daily in Britain.

The building shares a heavily tagged wall that runs down the road, which includes words such as “oust” and “thought crime”.

Welcome to Fish Island. This is Bow in East London. You might never pass through here, even if you are a Londoner.

It’s not really an island. On one side, the A12 slices across Bow and provides Fish Island with a clear boundary to complement the river.

Across that river awaits Queen Elizabeth Park. You might be tempted to visit the River Lea, where urchins are known to frolic in the polluted waters.

Sticking to Fish Island, you might visit one of its restaurants or hipster bars and help support the gentrification of what used to be working-class neighbourhoods.

The London flux may have changed Fish Island, but the Morning Star stays. The newspaper is still run through a cooperative and owned by its readers.

Not Supporting the Tanks

The same arguments come up again and again whenever the Morning Star is mentioned.

The name of the newspaper conjures up black and white images of tanks in the minds of its critics. The paper is supposed to be a tankie rag and nothing more.

Yet the Morning Star has taken a more critical line on the Russian invasion of Ukraine than its detractors would claim.

The newspaper has condemned the invasion as a “catastrophe” that has “unleashed a carnival of reaction”.

The Morning Star has broadly taken the same line as Stop the War. After all, the paper is aligned with the Communist Party of Britain (CPB) and, by extension, the Stop the War Coalition.

Despite the slanders, Stop the War has condemned Moscow’s “special operation” and called for Russian troops to be withdrawn from Ukraine immediately.

At the same time, Stop the War has criticised the role of NATO expansion. This is where the controversy lies.

This is not exactly the same as when the paper laughably described Assad’s destruction of Aleppo as “liberation”.

Even still, the paper inevitably faces accusations of being pro-Putin or at least soft on Russia.

Most of the arguments on the British left about Ukraine are about semantics.

The left is divided over the exact wording of ‘condemning’ the Russian war on Ukraine versus the responsibility of Western powers backing NATO expansion.

There is a minority of leftists who buy the line that Vladimir Putin is just defending Russian speakers from a Nazified Ukraine.

These people might as well live on Pluto, but their numbers should not be exaggerated.

Nor is this phenomenon a symptom of the left. Sections of the British right are enthralled by Putin for his muscular nationalism.

A significant section of the far-right is deeply enamoured with the idea that Russia represents a white motherland.

The Morning Star is a different story.

While Putin hands out 15-year sentences and Zelensky hands out AK47s to civilians banned from leaving, thousands are protesting or resisting the military non-violently. The world needs to see them, writes SYMON HILL https://t.co/Vg1uY1jDjy

Critics of the Stop the War line would point out that Russia is the principal aggressor against Ukraine and NATO’s role is contextual.

The fact that very few progressives support Putin or NATO is lost in this row.

The reason why the British left is tying itself in knots over Ukraine is that it still hasn’t fully adapted to the conditions of today.

The Warsaw Pact is long gone. We live in a unipolar world order, which some radicals hope Moscow will change, even though it’s led by neoliberal nationalists now.

The anti-war movement has built itself around opposing US wars (and rightly so), but divisions arise when it comes to countries seemingly outside America’s orbit.

The main enemy is still at home, and that’s as true in London as it is in Washington, Moscow and Kyiv.

The Deadweight of History

The Morning Star’s editors may be haunted by its past.

The memory of the Soviet invasion of Hungary in 1956 still hangs over the paper. The invasion gave British Communists their nickname ‘Tankies’.

Is genocide denial anti-imperialist now? How tankies are taking over leftbook and the London student scene https://t.co/cy1Ahskl2v via @Freedom_Paper

However, the story is not so straightforward.

The Daily Worker (as the paper was then known) sent correspondent Peter Fryer to cover the 1956 uprising in Hungary and the Soviet invasion.

His coverage was pro-revolt and damning of Soviet policy.

The Daily Worker suppressed Fryer’s dispatches because his reporting was contrary to the editorial line and to the party line. He left the paper and published his work in The New Statesman.

The newsroom was divided over the invasion.

The side that favoured the party line suppressed critical coverage – including a cartoon equating the Soviet invasion with the British invasion of Egypt. The cartoonist decided to quit.

The Soviet intervention came around the same time as the British invasion of Egypt. The two invasions of 1956 created a new opposition space in politics.

The New Left would emerge and become the driving force of counterculture.

The editors would live to regret the line they took over the invasion. The backlash of anti-Communism continued to hit the paper. Next time, it would be different.

Skip ahead to 1968, the Morning Star was once again divided over the invasion of Czechoslovakia. Journalists were shouting at each other in the newsroom. The people who were horrified by the Hungary invasion won.

The CPBG came out in opposition to the Soviet invasion, and so too did the Morning Star, despite the tensions over the intervention.

The USSR banned the paper in reaction and stopped ordering it in bulk copies for distribution throughout the Eastern Bloc.

The Brezhnev doctrine had sent shockwaves through Communist parties around the world. The divisions emerging in European parties would develop into full-scale factions in the 1970s.

The Eurocommunists wanted a more democratic Western European model of socialism compared to the USSR and its satellite states.

The Soviet intervention in Czechoslovakia was the catalyst for this turn, but it came up against strong resistance.

Many Communists still wanted to defend the Marxist-Leninist model and support it against US-led capitalism. Straight Left, an anti-revisionist faction, emerged in response to Eurocommunism.

The 1980s would be a long struggle between these two factions.

The Morning Star was the newspaper for people who supported the traditional CP line, while Marxism Today became the publication of choice for the Eurocommunist wing of the Communist Party of Great Britain.

However, the Morning Star was not synonymous with the Straight Left faction (who had their own newspaper by the same name). But the paper had much more in common with the anti-revisionist line than it had with the Eurocommunists.

Long story, short: the Eurocommunists would eventually take over the CPGB, but the Soviet Union disintegrated and so did the hopes of reforming away its flaws.

Somehow the Morning Star had outlived its own political project.

The Morning Star was once the only English paper distributed in the Soviet Union and the Eastern Bloc.

Since the early 1990s, Morning Star has had to adapt and open up to a variety of left-wing perspectives.

The newspaper has been able to survive partly because of its structural independence from the old Communist Party of Great Britain.

The Morning Star gets by on its small but loyal readership, donations, trade union support and a trickle of advertising revenue. Many people would be surprised that the paper has survived at all.

The paper acts as a conduit for industrial news coverage, just as it platforms hot takes from Green and Labour politicians. But it still falls back on a network of Communist parties worldwide to cover international issues.

The Morning Star is still strongest on labour reporting thanks to its strong ties to trade unions. This is an area of journalism that has been abandoned by most mainstream newspapers.

This is a crucial service neglected by most media organisations.

The style is old-fashioned, uncompromising and simple.

A political and ideological attack on trade unions: Next month the certification officer will acquire a raft of new powers to fine unions for a range of ‘offences.’ ADRIAN WEIR reports https://t.co/pNZFIPq3HG

If you didn’t know the Morning Star, you could mistake it for just another daily paper – so long as you overlook its tagline “for peace and socialism” and the red star on the front page.

When the Daily Worker was founded in 1930, William Rust hoped to establish it as a mass paper with 500,000 readers. His ambitions would be partly fulfilled in his lifetime.

Circulation peaked after WWII with estimates ranging from 100,000 up to 500,000 readers. The print readership is much lower today and is often estimated at 10,000.

Much like other left-wing papers, the Morning Star struggles against all odds.

The paper has no wealthy patron or lucrative ad deals. It is a part of the mainstream, but also a part of the left media ecology. Readers and trade unions sustain it.

Whatever its flaws, the Morning Star keeps going because it provides something other papers don’t.

Photograph courtesy of IBMT. Published under a Creative Commons license.

Not every media organisation can bear criticism, even self-criticism, but others require it to keep going. END_OF_DOCUMENT_TOKEN_TO_BE_REPLACED

Foucault once suggested that Clausewitz’s famous observation, “war is not merely a political act but a real political instrument” carried out by other means, be reversed, with politics made an extension of war. END_OF_DOCUMENT_TOKEN_TO_BE_REPLACED

Brexit will turn three on the last day of January, over six years since the 2016 referendum kickstarted Britain’s race to the bottom. END_OF_DOCUMENT_TOKEN_TO_BE_REPLACED