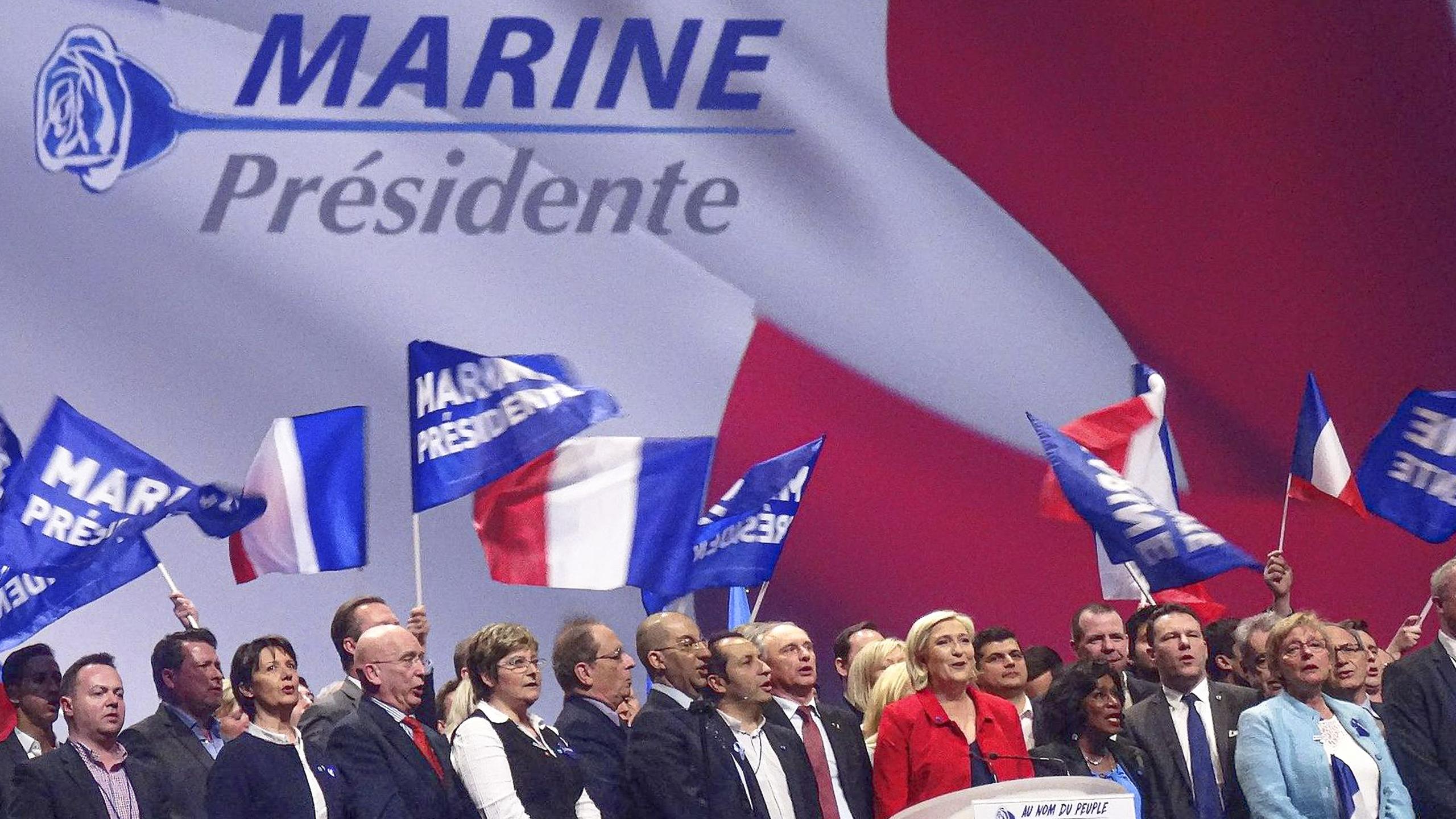 His pro-Europe theme reminded me of a chance meeting with his opponent, Marine Le Pen, in the same city nearly a decade ago.

In autumn 2013, Marine Le Pen was a member of the European Parliament.

She hadn’t yet challenged Macron to a run-off in the 2017 French national elections, or renamed her Front National party the Rassemblement National (National Rally) in 2018, cannily adopting more conciliatory language successfully used by the late socialist president Francois Mitterrand.

I’d convened a group of journalists to cover the upcoming European Elections campaign, being launched at the opening session of the 2013-2014 European Parliament.

Marine Le Pen had taken over the leadership of France’s far-right party from her father, Jean-Marie, just a couple of years earlier.

The elder Le Pen had made it to the run-off against Jaques Chirac in 2002, but his popularity had waned since.

His daughter was to break his record and earn her place in the run-off with Macron in 2017.

But in 2013, there they were, Marine Le Pen, her father, and a large group of friends and colleagues, enjoying a meal in a recommended Strasbourg restaurant, occupying several tables next to ours.

Our two groups practically filled the place. There was just one other table where a small group of young women were dining.

A frisson went around our table of journalists as we took our seats and took in our neighbours.

A few were discreetly taking photos – or rather pretending to take photos of each other – with a Le Pen in the background.

Realising their group was attracting our attention, one of them invited our French colleague to come over and take a photo with them.

Embarrassed to have been rumbled, the journalist reluctantly obliged, awkwardly handing over their camera phone for a selfie with Le Pen senior.

It was a smart move on his part to prevent further surreptitious snaps. Or, indeed, deter any subsequent hatchet job.

As we settled down and into dinner, it wasn’t long before a gipsy band entered the restaurant. The Le Pen party broke out in loud, raucous singing and clearly appreciated the entertainment.

I found it especially ironic that Marine Le Pen, notorious for her racist politics, was enjoying the music and company of Roma musicians, the very people she would gladly deport.

Then, just as the musicians left, another group burst suddenly into the restaurant, hurling insults at the Le Pen gathering, who instantly jumped up to defend themselves.

It looked like a brawl was about to break out.

Further insults were exchanged and a scuffle was broken up before the group left as suddenly as it had arrived.

We were all shocked, though the Le Pens and their entourage were already sitting back down to their drinks and laughing as if it was par for the course for them.

We were wondering how the activists had known that the Le Pens were in the restaurant, when the young women who had been dining quietly next to us paid their bill, swore loudly in French at the Le Pen party and spat on them as they exited.

By now, the owner had locked the doors and was apologising to us for the behaviour of her compatriots. In typical French hostess fashion, she was outraged that they had not allowed her controversial clientele to enjoy their meal in peace.

For our part, as media professionals we had been discretely observing all that transpired, relishing the unexpected close up on French nationalism.

I looked forward to the journalists amongst our group writing up the story. To my surprise and disappointment, none of them penned a word about it.

Not the journalist who had their photo taken with Jean-Marie Le Pen, nor any other member of the group.

Perhaps the pre-emptive strike of the selfie had done its job. Or perhaps they hadn’t thought a Le Pen bar brawl was sufficiently newsworthy back then.

Marine Le Pen’s popularity was still not assured and Frexit was nowhere on the horizon.

It was before the first Ukraine invasion had been launched by Le Pen’s future ally Vladimir Putin, and her fellow traveller Nigel Farage had pressed the Brexit button.

We hadn’t taken him seriously either.

Meanwhile, in the European Parliament, Marine Le Pen was laying the foundations for her nationalist, anti-EU policies.

A cursory look at her record from those years reveals motions to destroy the European Union from within.

One motion was to abolish the Fundamental Rights Agency, another the European Economic and Social Committee, and a third the Committee of the Regions, all set up to represent citizens and bring the EU closer to them.

Le Pen’s rationale was that it would be cheaper for taxpayers, as the same job could be done by the Council of Europe and the European Parliament, both located coincidentally in France.

Interestingly, there seems to have been no support from her for the popular MEPs’ initiative of abolishing the costly practice of relocating the whole European Parliament from Brussels to Strasbourg for one week every month.

Two years later, in response to the 2015 refugee crisis, Marine Le Pen tabled questions asking how many complaints and prosecutions there had been by and against ‘migrants’ relating to the European Border and Coast Guard Agency (Frontex).

She also called for the abolition of the Schengen Treaty allowing free movement between EU Member States and called on them to adopt the Australian refugee model (offshoring and pushback).

In 2018, Marine Le Pen was found guilty of misusing EU funds to support her 2017 national election campaign (just like her father before her, as well as Farage for his UKIP national campaign), and ordered to pay back €300,000.

Le Pen was subsequently found to have accepted campaign funding in the form of a loan from a Russian bank linked to supporters of President Putin.

Neither of those financial irregularities seemed to dent her electoral chances.

Fast forward to 2022. Putin is on his second, full-scale invasion of Ukraine, with devastating impact for the country and European security.

Yet even that does not seem to be affecting Marine Le Pen’s electoral prospects.

Despite her prior support for the Russian leader against daily images of a brutal war on our doorstep, it is Macron who is fighting to hold onto the French presidency, having lurched to the right, alienated voters on the left and alarmed minorities with his Islamophobia.

Marine Le Pen, meanwhile, is presenting herself as ‘le rassembleur’, a populist leader on the side of the French people.

She even sounds socialist at times.

And so, the French find themselves once again faced with the choice of holding their noses and voting for the least bad candidate.

Can we rely on France to vote and make the least worse choice?

The predicted margin of error of the latest opinion polls is worrying. Just as it was for the Brexit referendum and the 2016 US election, whose consequences are still playing themselves out.

The lesson we have still to learn is best summed up by American poet and civil rights activist Maya Angelou:  “When someone shows you who they are, believe them the first time.”

No centrist makeover will ever convince me Marine Le Pen has changed.

Photograph courtesy of Prachatai. Published under a Creative Commons license.

Foucault once suggested that Clausewitz’s famous observation, “war is not merely a political act but a real political instrument” carried out by other means, be reversed, with politics made an extension of war. END_OF_DOCUMENT_TOKEN_TO_BE_REPLACED

Brexit will turn three on the last day of January, over six years since the 2016 referendum kickstarted Britain’s race to the bottom. END_OF_DOCUMENT_TOKEN_TO_BE_REPLACED

Be careful what you wish for. It may be a cliché, but it’s one the Greens are learning all over again. END_OF_DOCUMENT_TOKEN_TO_BE_REPLACED