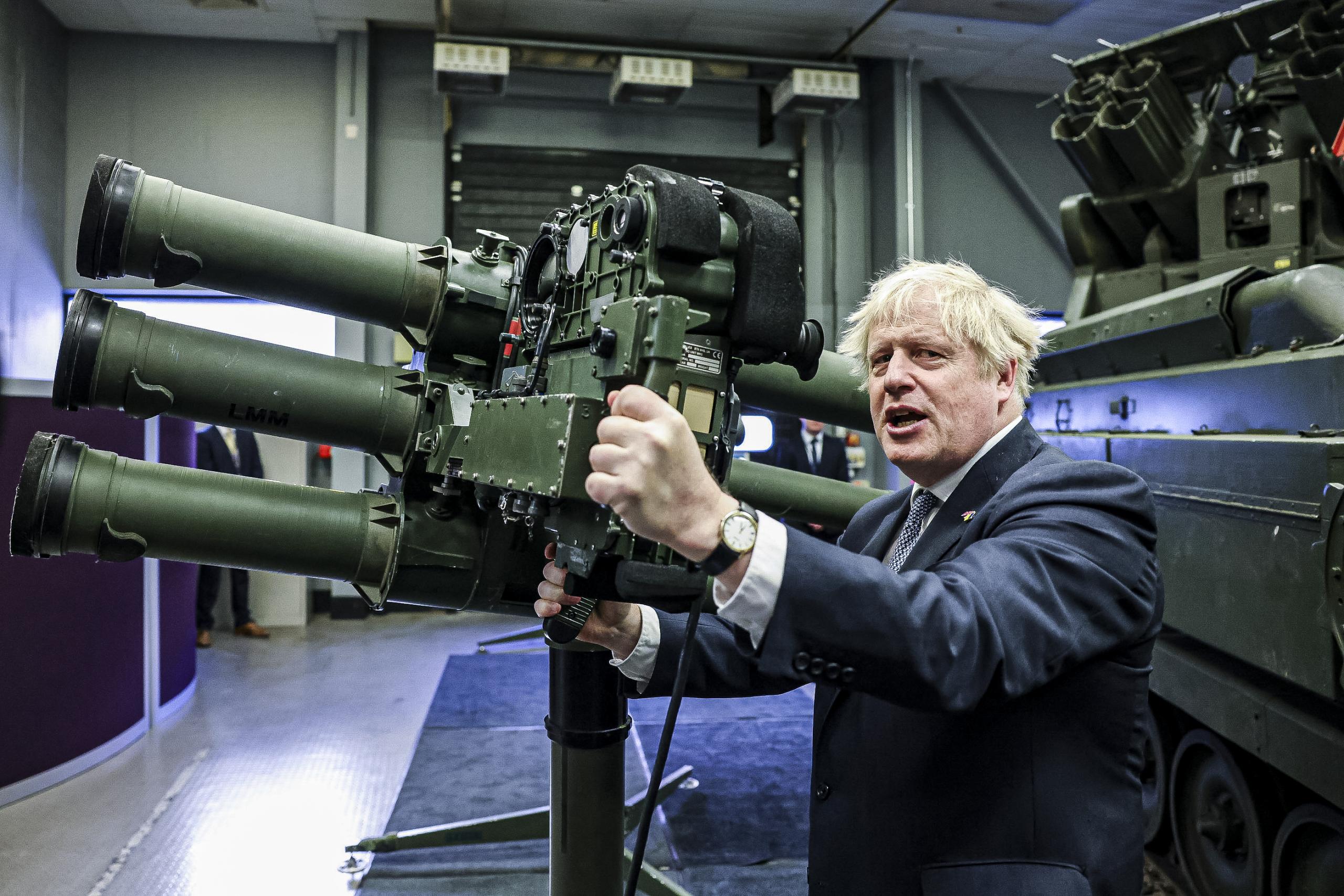 He'd rather fire it at Brussels. Boris Johnson, Belfast.

The British government is considering abandoning the sea border with Northern Ireland to raise a land border with the European Union.

No one should be surprised by this. Northern Ireland is not so much the name of a province than a synonym for crisis.

It’s just that the Good Friday Agreement brought to a close a civil conflict, though British troops would not be withdrawn until 2007.

Boris Johnson could be about to deliver a blow to the peace settlement by tearing up the Northern Irish protocol.

The UK’s position is an expression of pure contempt for Northern Ireland. The Johnson government is living up to its record of vandalism.

Foreign Secretary Liz Truss is happy to pursue this reckless policy, since the Leave voters who back her see it as another ‘fuck you’ to the EU.

Truss doesn’t care about the consequences. She may even be PM one day, if she can maintain the support of the Tory membership.

Nevertheless, it’s quite something for the UK to be at odds with the US, who played a crucial role in brokering the Good Friday Agreement.

And yet the so-called ‘special relationship’ does not seem to apply when it comes to Northern Ireland.

The Biden Administration is siding with the EU over the Northern Irish protocol, even threatening to drop the offer of a US trade deal if the protocol is scrapped.

It’s rare for the British government to clash with the US on anything. Yet the flashpoints have often been over decolonisation in the post-war period.

Eisenhower famously sided against Anthony Eden over the 1956 Suez invasion, while Reagan pleaded with Thatcher not to resort to armed force to retake the Falklands.

The Major government was trying its best to stop Adams from getting a visa, but the US authorities granted it anyway.

Now the clash is over territorial claims of the UK versus EU free trade.

The stage for this crisis was set in motion by the Brexit referendum in June 2016 and the result may be a trade war between the UK and the EU.

The Tories are willing to risk a lot for electoral strategy, whether it’s the UK economy or peace in Northern Ireland.

Nationalism is the name of the game and the rules do not always follow international treaties or even domestic laws.

The British government may be pushing for the end of the Northern Irish protocol, but this pursuit does not favour Ulster unionism in the long-term.

A strictly patrolled land border could do more to strengthen the republican case than even the sea border has.

Nevertheless, the DUP favours a land border over a sea border because it reaffirms Northern Ireland’s place as a British territory.

Yet the result of Brexit has been to boost support for Sinn Fein.

The party synonymous with Irish republicanism is at its strongest on both sides of the border. Sinn Fein is the biggest opposition party in the Irish Republic and the biggest party in Northern Ireland.

This is exactly what the partition of Irish territory was supposed to prevent.

BBC journalist Lewis Goodall recently went viral with his comments that the boundaries of Northern Ireland were drawn to guarantee a Protestant majority.

This clip went viral partly because of how little the English understand Northern Ireland.

Of course, the Orange state (as some call it) could have worked had the boundaries been drawn to exclude more Catholics.

The historic ‘mistake’ was to include a large Catholic minority that would have to be kept disenfranchised for decades.

So Northern Ireland was always going to face a crisis of legitimacy due to the dispossession inherent to the project. This is putting aside the obvious truth that the partition was a crime in itself.

We might tend to think of a united Ireland as a ‘reunification’, but this presupposes a united past and a united Irish republic has never existed.

Unification means a new state and it should mean a new politics.

Sinn Fein President Mary Lou Macdonald has said she would like to see a border poll secured in the next five years. But there is no certainty about the timeline for holding such a referendum.

Support for a united Ireland has been growing in Northern Ireland and Sinn Fein’s majority reflects this increase in support.

A border poll would still be very close and no doubt bring barely submerged grievances to the surface once more.

Many people fear there could be a return to the bad old days when power drills were deployed for purposes other than their designers intended.

Rogue loyalists could strike out against Catholic civilians if they feel a border poll is imminent.

The situation could spiral out of control if there is a response from republicans followed by reprisals.

The Troubles are unlikely to be re-run for many reasons, but there are still dangers since the sectarian divide is still entrenched in the six counties.

British Sovereignty or Else

The British government is pursuing the end of the Northern Irish backstop (the protocol’s original name) to reassert its sovereignty and shore up its right-wing base by doing so.

Yet the backstop is set to be in place until 2025 when it could be extended if the Northern Irish government decides to continue with it. The principle being that the sea border requires democratic consent. The DUP never consented to this deal.

The DUP had blocked May’s Brexit deal over the backstop and eventually broke with the Tory government over the proposal.

Boris Johnson was willing to go it alone to get the deal he wanted to win the election.

Skip forward three years, the DUP is refusing to form a government until the backstop is dismantled and the UK is looking to unilaterally scrap the sea border.

This may have been the plan from the start though.

Johnson probably signed off on the Brexit deal with the EU thinking he could scrap the protocol afterwards.

BoJo may have had no intention of keeping his promises. On this he is consistent.

The Foreign Secretary and Johnson may be hoping to establish customs posts on the UK border with Ireland, but this will not be easy to manage.

However, the point of Brexit was never to secure political and economic stability. Some kind of border was inevitable as a result of the Tory deal.

Divergence with EU regulations and standards means border controls either between the UK and Ireland or across Ireland itself.

It’s not just a sectarian issue, though. The Alliance Party and the Greens also supported the sea border.

Setting up customs posts on the British border in Ireland is an unworkable solution given the reality of the border, but the point for the DUP is not practicality.

It’s about the status of Northern Ireland as part of the UK.

Although the Conservatives don’t really care about the union, Boris Johnson will side with Ulster unionists when it suits his domestic agenda just as he was happy to disregard them in 2019.

All of this goes back to fundamental questions about the status of Northern Ireland.

These issues will keep coming up for as long as there is a British border across Ireland.

The conflict between Russia and Ukraine continues with no end in sight. END_OF_DOCUMENT_TOKEN_TO_BE_REPLACED

Some websites make the news, others make headlines. END_OF_DOCUMENT_TOKEN_TO_BE_REPLACED