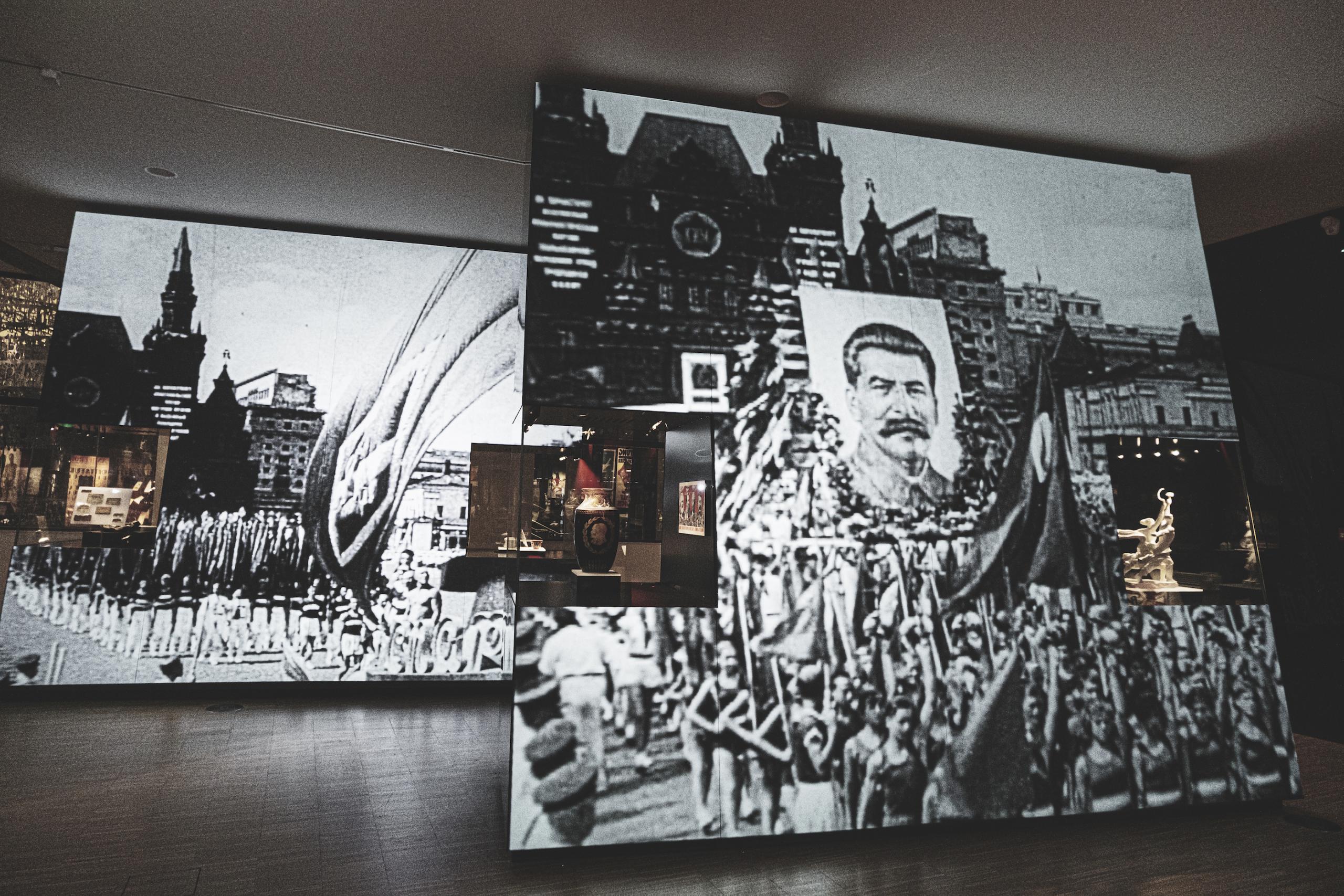 The brainchild of Hans-Gert Pôttering, the German president of the European Parliament some ten years earlier, the Brussels museum was intended to help encapsulate the continent’s history.

It’s an ambitious aim that turned out to be devilishly difficult for the museum’s curators.

The House chose to focus on seminal moments that live on in Europe’s memory. Even if, or precisely because those recollections may involve a different version of events. Unsurprisingly, the Second World War and the leaders who prosecuted it feature prominently.

So, with images of the war in Ukraine now filling our newsfeeds, and Nazi narratives being revised and weaponised by Russian leaders, it seemed time to revisit the museum. In particular, I wanted to re-examine the part that juxtaposes Nazism with Stalinism.

Unsurprisingly, a temporary exhibition of the museum’s European posters recently opened, including the Soviet prewar and post-war periods.

When Walls Talk depicts the history of Europe through posters, covering cultural change, historic events and protests over the past hundred years.

Street art and political graffiti are at the heart of The Battleground’s photojournalism, to portray present-day Europe, so such posters appeal to our sensibilities. But they also speak to the moment.

Wartime mobilisation classics from the UK, US, Germany and the Soviet Union set the scene. Pro and anti-fascist posters from Italy and Spain follow, together with anti-Bolshevik and anti-Red Army images from France, Hungary, Czechoslovakia and the unmistakable visual identity of the Solidarnosć trade union movement in Poland in the 1980s.

In today’s context, I was especially struck by Russian language posters decrying “Fascism is hunger, Fascism is terror, Fascism is war!” and the picture of “The Fascist boot” being polished by capitalists and clergymen.

Retro posters celebrating European festivals, film, sport and travel over the years proceed to lighten the mood, though there are more hard hitting posters calling for democracy and human rights, equality, and free speech, with a nod to Russian feminists Pussy Riot and the 2015 Charlie Hebdo attacks, in Paris.

On the whole, though, the temporary exhibition serves as a prelude to the dark times depicted in the part of the permanent collection entitled Europe in Ruins.

On a darkened floor of multimedia exhibits, black and white film footage of Stalinist and Nazi scenes is shown on a loop on adjacent giant screens, forcing the comparison.

Stalin had been responsible for millions of deaths through famine in Ukraine, deportations and incarceration in the Gulag camps. Surely the systematic extermination of peoples through ethnic and social cleansing and the quest for worldwide domination by Hitler’s Nazis were incomparable?

Today, given the Russian army’s bombing of civilians and siege of cities in Ukraine, with genocidal statements issued from Russian leaders and evidence of war crimes emerging, would I feel differently?

As I wandered through the visualisation of Europe’s darkest days, I found it easier to contemplate the Soviet memorabilia. By contrast, it was very difficult to study the Nazi exhibits.

No one needed to see those uniforms or insignia, was my reasoning as I desisted from taking photos. This was just as well because the bronze bust of Hitler was off limits to photographers.

Once in the darkest recess dedicated to the Holocaust and Nazi collaborators, I found myself transfixed by a photograph of a concentration camp inmate, staring directly at the camera with an unmistakable expression of accusation in his deeply hollowed eyes.

A feeling of guilt came over me, despite having been born decades after the war. I found myself mouthing the words, “forgive us”. As a continent, we let the victims down, whatever country they happened to be in. It’s hard to not still feel responsible, even now.

How can we prevent such atrocities from happening again, even amid Europe’s latest war?

The conflict in Ukraine may not be the same, but, Russian de-Nazification rhetoric aside, the violence indulges similar nationalist themes. The widespread killing of Ukrainian civilians stokes fears of genocide, not just in WWII, but in the Holodomor, in the 1930s, in which an estimated 3.9 million Ukrainians died.

The group of students I attached myself to during their tour were being asked the same question by their guide.

Should we follow Winston Churchill’s advice and “turn our backs on the horrors of the past” to ‘look to the future or, in the words of Elie Wiesel, “bear witness for the dead and for the living” not to “deprive future generations of a past that belongs to our collective memory”?

It was natural to agree with the words of the Holocaust survivor. But I was struck by the thought that many older survivors of war cannot bring themselves to translate what they experienced into contemporary politics, having buried the past to move on. Even Wiesel had his difficulties.

The answer is that we need to do both. So as some are bearing witness to current war crimes and brutality in Ukraine, others are already trying to put the carnage behind them.

And whilst false narratives and propaganda are at their height in times of war, the relaying and recording of events that we are seeing by journalists, human rights groups, refugees, survivors of rape and other war crimes remain our responsibility.

We didn’t start the war. But we must do our utmost to stop it, whilst making sure the perpetrators are held to account for their crimes and the victims are not forgotten.

It’s a common claim that history is written by the victors. This perhaps explains why Russian narratives are fixated on fighting Nazis, overlooking the fact that they were once on the same side.

It was an act of contrition. In June, the King of Belgium returned a tooth to the Congo. END_OF_DOCUMENT_TOKEN_TO_BE_REPLACED

Few Italian elections since the turn of the millennium have felt more like the twentieth century than this one. END_OF_DOCUMENT_TOKEN_TO_BE_REPLACED

No European city knows the Nakba like Berlin. At least in my part of town, Neukölln. END_OF_DOCUMENT_TOKEN_TO_BE_REPLACED