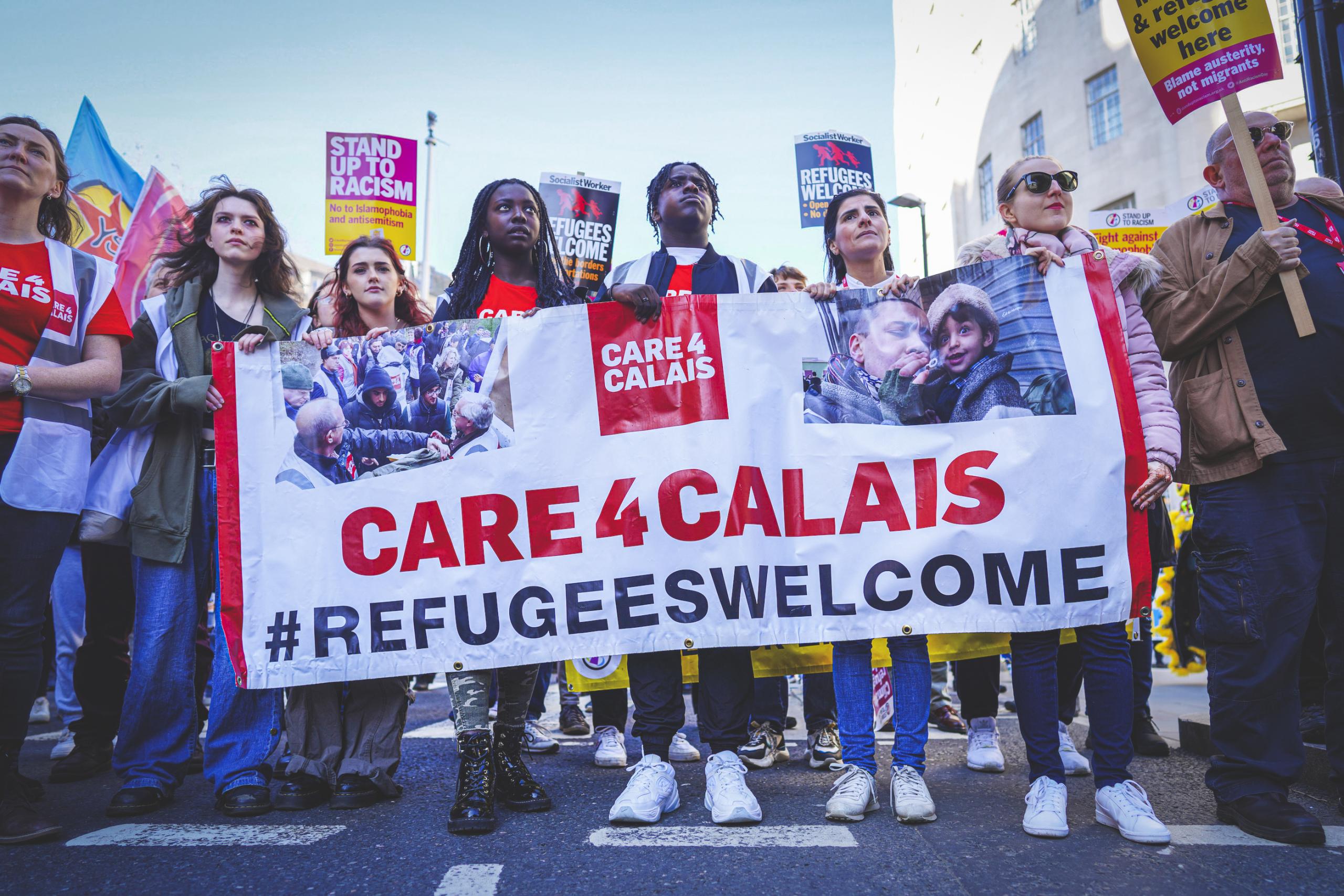 In 1988, he was ahead of his time in outlining three major threats to global security: climate change, migration and terrorism.

The former Norwegian Prime Minister, Gro Harlem Brundtland, had just published her groundbreaking report for the UN defining sustainable development. It would take another 30 years for that thinking to become mainstream.

No one had yet made the explicit link between climate change and migration. And we were more than a decade away from the 9/11 atrocity that provoked a ‘War on Terror’ which accelerated international terrorism, sparked proxy wars and led to millions of refugees.

Back in 1988, the British delegation in New York was hosting Mujahideen rebels at the UN General Assembly, in a show of solidarity against the Soviet Union’s invasion of Afghanistan a decade earlier.

I remember asking who the guys in robes with long beards were, being shown to their seats by our delegation colleague.  We didn’t imagine the US, UK and a ‘coalition of the willing’ would invade Afghanistan and spend two decades fighting their descendants, the Taliban.

At the very same time, Western democracies were pressuring countries in the Soviet bloc to allow emigration and facilitate family reunification. I know because I spent the first two years of my foreign service doing exactly that.

We lobbied for the respect of human rights as set out in the Universal Declaration of Human Rights: notably the right to leave a country, to seek asylum and to a family life. It wasn’t just Russia. We actively lobbied Romania, Bulgaria, Poland, Hungary, Czechoslovakia and East Germany to let their citizens immigrate and reunite with relatives in another country.

It’s no surprise that we had waves of migration from the Middle East and Europe. We just hadn’t thought through the consequences of our actions. Which is surprising, because in the UK, respective governments had been increasingly clamping down on immigration from the former colonies – Commonwealth countries in Asia, Africa and the Caribbean.

I had an induction into the UK’s immigration policy and legislation in 1989, when I was due to be posted to Moscow. There had been a spate of tit-for-tat expulsions and rapid replacements of the expelled British diplomats were needed.

I was tipped to replace the Vice-Consul and so was sent on a visa training course near Heathrow. I recall feeling increasingly uncomfortable as the course instructor set out the restrictive immigration legislation that had been brought in following each wave of postwar migration.

From the Commonwealth Immigrants Acts in 1962 and 1968 and the Immigration Act in 1971, each successive policy was designed to make it more difficult for commonwealth citizens to live, work and settle in the UK. Which also had the knock-on effect of making it harder for relatives to join family who were already residing there.

After my first Foreign Office assignments advocating the right to emigrate and family reunification, I found it incongruous. Those feelings were intensified when we were taken on a visit to the now-infamous Harmondsworth immigration detention centre near Heathrow.

I spent most of my time looking at the floor rather than meeting the eyes of mostly brown young men in the so-called recreation room, with only windows at ceiling height giving any natural light.

We were then taken into Heathrow itself to observe immigration officers processing passengers coming off an incoming flight from Pakistan.

I recall a few groans as the announcement came over the staff tannoy that the flight from Islamabad had landed and officers should make their way to the arrivals desks. Happily, the officer I was assigned to was polite and respectful as he questioned visitors on their purpose, intended place and length of stay, and financial means.

I finished the course with a sense of relief, but also trepidation about my forthcoming role. As it transpired, I was spared the visa processing job thanks to an intervention from my boss who knew how much I had enjoyed human rights work and thought I’d be wasted on visa processing.

But as science and technology officer, I regularly came into contact with the visa system. The Soviet Union was opening up, so visits of scientists and academics, as well as ordinary Russians, became more and more frequent to the UK.

Similar questions were asked and checks made by the embassy immigration officers as the Home Office was straining to cope with increasing numbers. We had to intervene occasionally to let a legitimate visitor in.

Towards the end of my posting in Moscow, I was told that given my training, it was quite possible I could be assigned to a next job issuing visas in Islamabad. That uncertainty and inability to determine my career path were contributing factors to my subsequent resignation.

Years later, arriving back in London at the turn of the millennium, Labour were in power and the UK economy was booming. There was a feel-good factor in the UK and especially London, where business and the financial sector, in particular, were thriving.

The public sector was finally getting the investment it needed, deregulation was continuing apace and the Foreign Secretary Robin Cook introduced an ethical foreign policy (until his resignation against the Iraq war in 2003).

In 2004, the European Union opened its labour markets to then-new member states, the largest of them Poland. The growing economies in the UK and EU needed migrant workers to fill labour shortages, and fuel further economic growth.

After the global banking crash in 2007-8, and a decade of austerity that depressed growth and salaries, it became harder to justify an open-door policy on European migration.

The Labour Party could and should have argued that we needed the doctors, nurses, carers and cleaners to keep our NHS going, seasonal workers to pick our fruit and veg, veterinary inspectors to ensure cattle are killed humanely, meat prepared safely, and so on. They chose not to.

Instead, Labour ministers brought in a raft of restrictive policies focused on reducing migration, as the human tide created by conflicts we had stoked in Afghanistan and Iraq and failed to stop in Syria finally hit our shores.

Rather than explain that immigration is good for our economy, they went with the ‘tough on immigration’ narrative in an attempt to curry favour with voters and head off accusations of being soft on border control.

This saw one of the most shameful immigration policies any UK government has enacted. Labour’s hardline Home Secretary David Blunkett introduced legislation to withdraw financial support from failed asylum seekers and take their children into the failing UK care system if their parents subsequently became destitute.

This was years before we condemned the Trump Administration’s separation of children from South American migrants as they crossed the border with Mexico. It was all the more galling at the time, as Blunkett had apparently fathered a child with a married woman and was seeking legal access to his son. In a further display of hypocrisy, Blunkett was forced to resign when it was revealed he had fast-tracked a visa for his lover’s nanny.

It would take several years for his immigration policy to be declared inhumane and overturned in the courts. In which time, who knows how many children lost the security and care of their parents at the most precarious time in their lives.

Even Ed Miliband, when he replaced Gordon Brown as the next Labour leader in 2010, continued to trot out the ‘tough on immigration’ line. Allowing the anti-migrant narrative to fester unchallenged until it was picked up by nationalists who made it their Brexit rallying cry.

The result, as they say, is history.

Of course, nothing quite compares to Theresa May’s deliberately ‘hostile environment’ that caused misery for the Windrush generation, or the current Home Secretary Priti Patel’s heinous scheme to deport asylum seekers to Africa.

The irony of a daughter of Indian migrants from Uganda sending refugees to Africa is not lost on the British public.

Particularly as it watches a motley crew of Conservative candidates vying to replace Boris Johnson with stories of their immigrant backgrounds, while upholding an immigration scheme that would have seen their parents refused entry.

And yet, for the most part, it should be said that the British welcome refugees in clear and present danger. You only have to look at the public response to people fleeing Afghanistan or Ukraine to realise that Britons are welcoming when they see the need.

But in a populist culture that blames migrants for the UK’s problems — lack of affordable housing, a failing national health service and social care, low wages, rising crime and poverty — a welcoming immigration policy is a hard sell.

It’s not impossible of course, and any truly progressive politician shouldn’t be afraid to try. After all, Brexit might eventually lead to a more pragmatic immigration policy, out of sheer necessity.

Shortages of staff in health and social care beyond the Covid pandemic, as well as in the travel industry and hospitality are visibly impacting people’s health and daily lives. Migrant labour is beginning to be seen not only as necessary but essential.

We have a skills and labour shortage that Brexit has exacerbated and British demographics will worsen. Like it or not, the UK has an ageing population that will need care and contributions from migrant workers.

Allowing refugees to work where they have the skills and (re)train where they don’t could plug short and long-term labour gaps. The UK’s Refugee Council advocates just such a scheme.

According to the British Medical Association, there are 1200 medically trained refugees in the UK.  The cost of training a refugee doctor to work in the NHS is just 12% that of training a new doctor for one year.

I can’t be the only Brit who grew up in the UK with an Indian family doctor, had my children delivered by Asian and European nationals and life-saving medical intervention by an Afghan.

It really is time that ‘global Britain’ lived up to its name.

The conflict between Russia and Ukraine continues with no end in sight. END_OF_DOCUMENT_TOKEN_TO_BE_REPLACED

Some websites make the news, others make headlines. END_OF_DOCUMENT_TOKEN_TO_BE_REPLACED