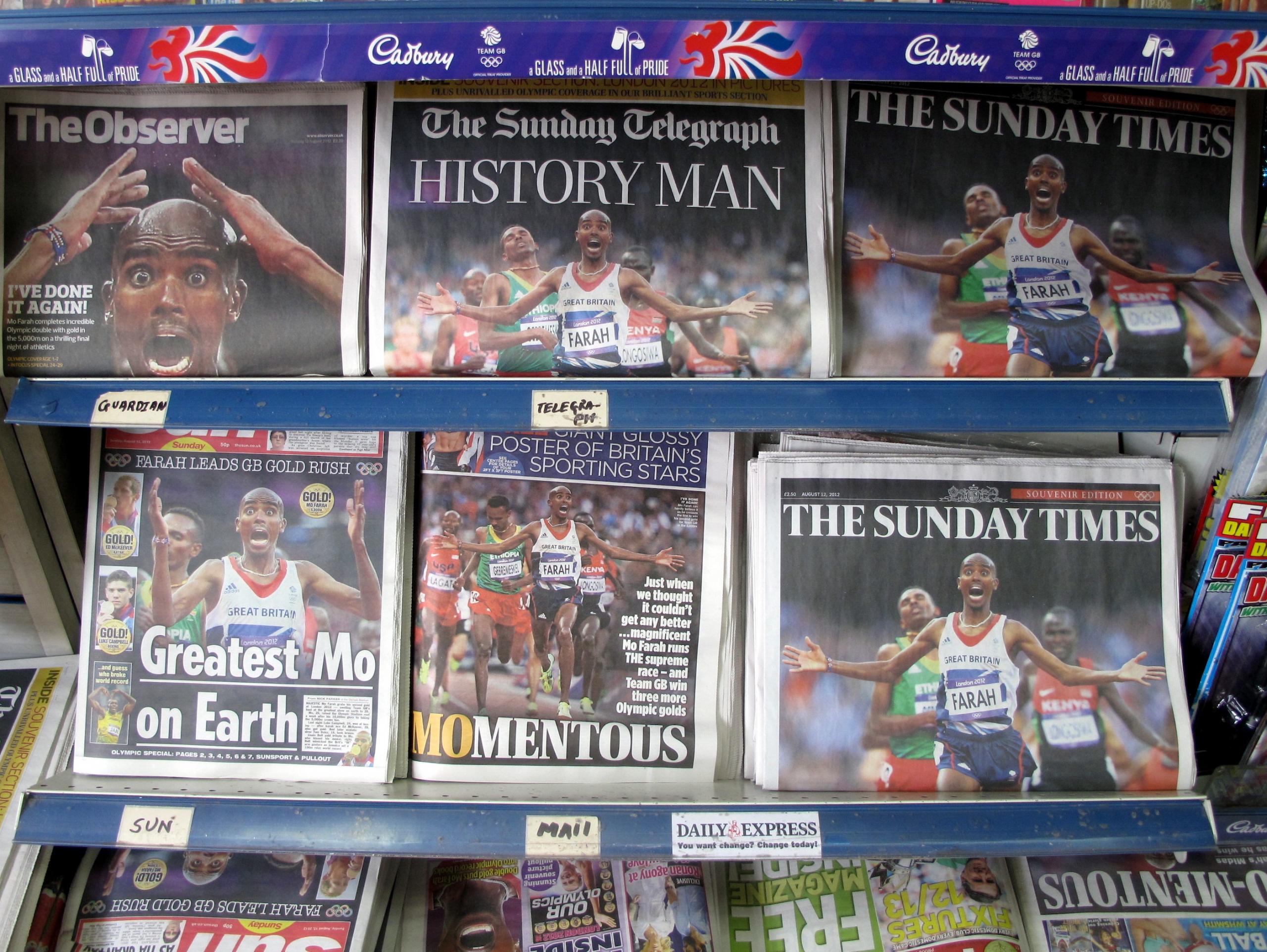 Keep walking. You’ll soon reach White Post Lane and cross the bridge to the transitory green space before reaching the Olympic Park. This is if you can resist the allure of waterside bars.

You’ll leave behind Hackney Wick and pass Engie’s metallic building. This structure looks like a rusty block of bronze dropped here from space. You’ll be able to see the London Stadium and the ArcelorMittal Orbit in the distance over the other side of the road.

Many people talk as if this place represents a different era when the British people were more united, more open, less polarised and less intolerant. The 2012 opening ceremony presented a quaint liberal multicultural fantasy about British history.

“Ten years on, the whole ceremony feels more dreamlike than ever. This was Britain as a rich, diverse, multicultural, imaginative, inventive nation comfortable with its identity and capable of reconciling its contradictions,” writes Steve Rose in The Guardian.

“We were traditional yet modern. We were powerful yet caring. We were orderly yet anarchic. We had a vast back catalogue of world-changing culture from which to draw. We knew how to put on a good show. And we had a sense of humour.”

The London 2012 opening ceremony seems to provoke nostalgia in the liberal imagination. This was years before Brexit shattered the post-political consensus of moderate managerialism, but the fractures began opening up in 2008.

We’re supposed to believe the UK was okay until June 23rd 2016. The truth is that this is just when the bubble burst and collective illusions disappeared with it. Some centrists have made it very clear who they blame for this state of disorder.

“It feels as though London 2012 and the Britain it represented has fallen victim to both the miserablism of the left and the Brexitism of the right,” writes Dave Hill in Prospect.

Hill pines for “a Britain that got it right yet often feels as if no longer exists”. He is far from alone in this feeling given the dystopian atmosphere in the UK today. However, not everyone has Olympic nostalgia.

The London Olympics was a break from austerity, yet it reinforced austerity. It was a private project with massive state backing. It was a spectacle conjured up for the masses, but also to create new growth areas for British capitalism.

So it was ironic that the opening ceremony invoked a folksy Merrie England past and a progressive modernity. Naturally, the right-wing media hated the 2012 opening ceremony for its ode to the Windrush generation.

Paleoconservative columnist Peter Hitchens later dismissed Burley’s comments as “lavatory wall language”, but he still loathed it for the same reasons. He disliked it most of all for drawing on pop culture since the 1960s.

The opening ceremony didn’t fit with his avowedly chilly Protestant monocultural view of Britain. In short, Hitchens wanted cultural austerity to match the austerity imposed on the country by the Cameron government.

It’s easy to sympathise with Hitchens when he complains about compulsory fun. Everyone was expected to be excited about the London Olympics, yet many Londoners planned their holidays to get out of town during the games.

London is a city that struggles with a slight amount of snow. Anything other than mild weather can reap havoc on the transport system. However, the planners were keen to prevent a descent into chaos but not just transport chaos.

The planners were very much security-minded. The state deployed thousands of armed police and army personnel and even stationed missile defence systems on the roofs of housing estates.

Kids caught hanging out in their neighbourhoods were moved on by the cops. The state mobilised forces to squeeze inconvenient communities out of the area. Many people ended up being moved to Essex.

Compulsory purchase orders were used to displace businesses getting in the way of the grand project. However, some residents of towers managed to hold on to their properties. Nevertheless, this modern-day enclosure was successful.

The narrative is that the area was an urban wasteland, but this was not a virgin forest. Working class communities were here too, surrounding the factories, industrial spaces and landfills.

This part of East London was the industrial hub of London for decades. With the decline of industry and the decline of London Docklands, the space became a partial wasteland but it was always between destinations.

Despite the planners’ best efforts, the green space is still a place between destinations: East London hipsterdom and Stratford’s bustling consumer paradise. The park may be a destination if you want to see West Ham play, but for millions of people, this is not worth the trip.

Although 30 million people have reportedly visited the park since the games, the park project has sometimes run low on revenue. One report has deemed the stadium “a ticking time bomb” because of its rising cost to taxpayers – now running at £8 million a year.

The legacy buildings have become models of sustainable sport architecture. Somehow this is supposed to compensate for the displacement of entire communities and the loss of social housing.

But this was always going to be the case. The project was regeneration through state initiative and private connivance. It was quintessentially bourgeois. It was about creating a pseudo-public space managed by a mayoral development company.

Regeneration does not mean public investment, social housing, public services, schools, hospitals, or jobs. It does not mean abundance for the masses. It’s a clever piece of marketing.

The former East End industrial landscapes were converted into soulless luxury apartment buildings that serve as filing cabinets for the professional class.

Yet the regeneration has allowed a semi-wild space in and around the River Lea.

Tall reeds dominate the riverbank. Scantily-clad teenagers and twenty-somethings often swim in the River Lea. It’s one of the most polluted rivers in the UK, but the swimmers defy its pollution to frolic among the reeds like nymphs.

The Hackney Marshes may be the best part of the park. It may be that the whole park needs a dose of rewilding to make it much more vibrant and less sterile. Unfortunately, the sterility might be hard to shake off.

There were concerns that the construction was unearthing a lot of nuclear material dumped in the area. The space was home to two landfills, as well as a dumping ground for asbestos and home to a small nuclear reactor.

All of this was transformed so someone could make a buck. This is what culture critic Jonathan Meades called London’s “obese dysfunctionalism”. Yesterday’s nuclear dumping ground could become tomorrow’s boondoggle.

Ten years on, memories of the London Olympics feel like dreams from another planet. After all, 2012 was just two years into a Conservative-led coalition government with the Lib Dems, the so-called ‘Con-Dem Coalition’.

Prime Minister David Cameron was presiding over austerity while planning tax cuts for corporations. The UK was still a member of the European Union and had close trade ties with China. These were the defining features of ‘Osbornomics’.

Now the shiny-faced Etonian is long gone, along with his project of Third Way Toryism. His most effective successor, a fellow Bullingdon Club member is about to be ejected from Number 10 but the country has irrevocably changed.

This is the era of new nationalism. Britain faces a very different present wracked by shortages following Brexit, the COVID-19 pandemic and the increasing pace of climate change.

However, the supply chains we took for granted were fragile in 2012. We had the illusion of stability, even after the 2008 financial crisis and the end of 16 years of booming GDP growth.

Now in the end days of Johnsonism, we’ve come to accept low-growth as the norm after a decade of Tory misrule. Yet we’re moving away from the neoliberal model of growth to something else, possibly something worse.

Austerity is no longer the name of the game, and the Tory government will be falling back on deficits no matter who becomes premier in September. A strong interventionist state will continue to try and shape the economy and the country.

Most of the country will slip further into stagnation facing rising inflation and wage restraints, while the rich will continue to benefit from skyrocketing property prices. The only hope in the UK is that the unions are fighting back.

On my way back from the Olympic Park, I find that all trains from Hackney Wick have been cancelled. My phone died and I feared I might be stranded for the night, but I eventually found my way to a bus stop.

The Olympic Park may come to represent the dying days of an era without a name: the last days of neoliberalism. But if we’re nostalgic for 2012, we could well be nostalgic for 2022 in the near future and that should worry us.

The conflict between Russia and Ukraine continues with no end in sight. END_OF_DOCUMENT_TOKEN_TO_BE_REPLACED

Some websites make the news, others make headlines. END_OF_DOCUMENT_TOKEN_TO_BE_REPLACED