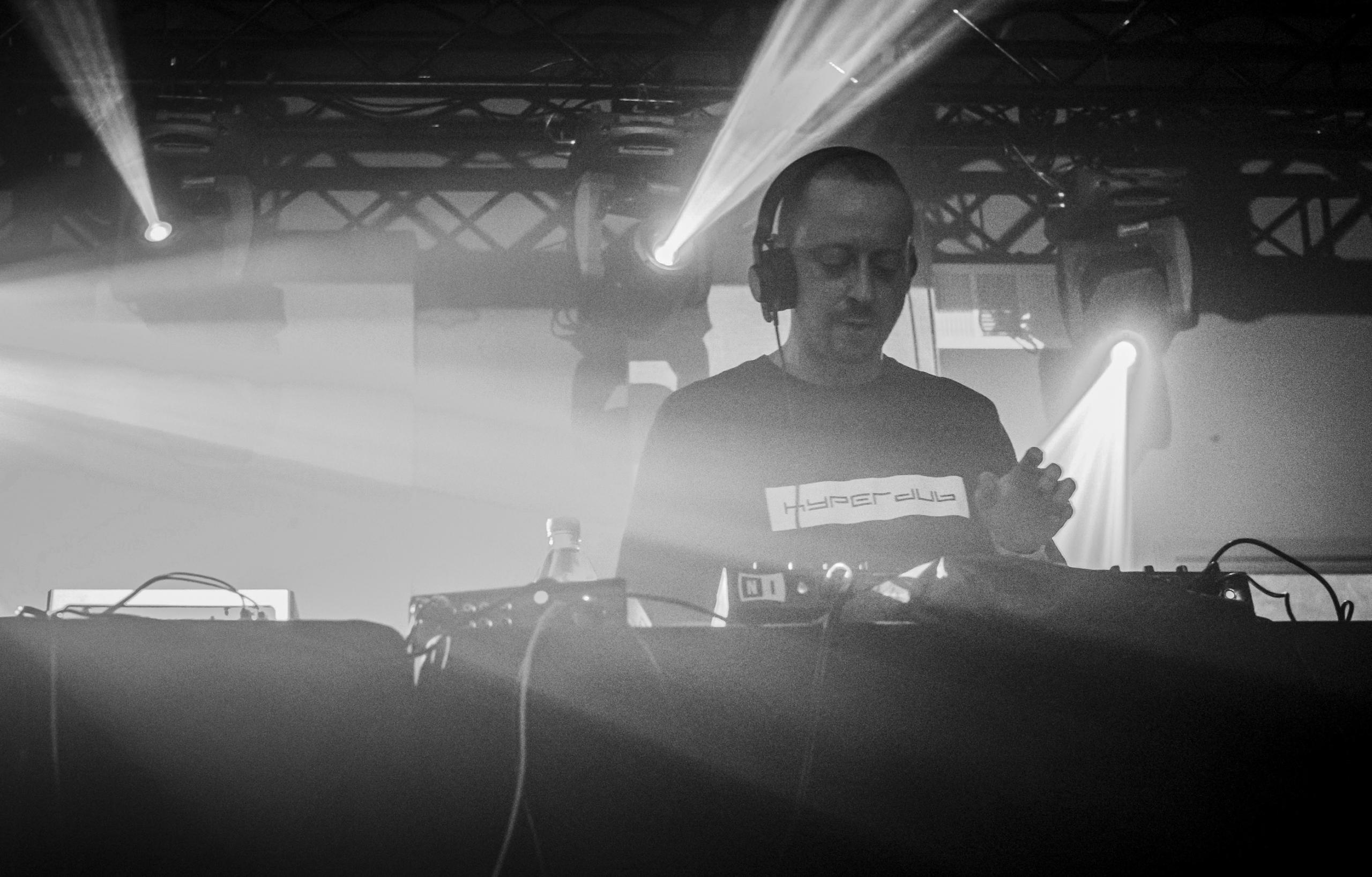 Heard in isolation, without recourse to liner notes or interviews, it showcases the restrained minimalism that has characterised most of his work since his longtime collaborator The Spaceape passed away in 2014.

The sounds seem to derive straight from synthesisers or their computer simulations, rather than relying on sampling and field recordings. The beat is irregular, often frenetic, and not grounded by low-end bass or drums. Most tracks start one way, then slant away in another direction, making it hard to pick out a sustainable groove.

In this regard, the title of the second track, “The Break Up”, feels like a comprehensive aesthetic statement. While Kode9 has always prioritised the disjunct and dispersed, this new record doubles down on those qualities.

That’s a case of form mirroring content because Escapology is meant to be a break-up record. Not in the traditional sense of personal relationships, but in a self-consciously political one.

We know this because of the man who made it. When he is not being Kode9, Steve Goodman excels as both a facilitator of anti-establishment cultural production — primarily through the storied Hyperdub label that he founded and continues to run — and free-ranging commentator on its place in contemporary society. Few artists do a better job of explaining their intentions.

In interviews about Escapology, Goodman has described the record as a somewhat more dance floor-friendly — at least conceptually — distillation of a larger project, a work of sonic fiction called Astro-Darien.

He told Dazed magazine that it’s “a weird 26-minute story narrated by Scottish robots with unsettling sound design, a fever dream of an AI geopolitics simulator”. But that description merely scratches the surface of the underlying concept.

Noting that, “it might be a bit presumptuous to call it a story in any conventional sense”, Goodman, went into greater detail in his conversation with Crack magazine:

It’s told from the point of view of the lead programmer at Trancestar North on the game Astro-Darien, who is tasked with devising Sim-Caledonia – a simulation model of Scottish history – that through deep learning of past data purports to model future scenarios. The game engine is run on an AI named T-Divine based on the emulation of a leading Scottish historian’s brain. What you hear and see in the installation are excerpts from the T-Divine database, particularly the system struggling with the tensions embodied in the word ‘colony’; the disparity between the catastrophic attempt to colonise Darien (the role of settler colonialism in the birth of British capitalism, Scotland’s role in the slave trade in between Africa and the Caribbean) in the late 17th century and the promise of a future utopian space colony.

For someone like me, who has spent decades reading anti-imperialist histories, abstruse cultural theory, and speculative fiction about the near future, this kind of artist’s statement inspires euphoria. Although I was already a big fan of Goodman’s work, both as a musician and a label boss, his words here make me admire him all the more.

But I wonder how many other people who listen to Escapology would have this response. Sometimes his way with words gets in the way of what he’s doing with his music, which frequently seems to be searching for a way to flee the bonds of conscious intention.

Because Astro-Darien itself will not be released until later this year, this problem is more acute this time around, since all we have to go on are his interviews and the liner notes.

Basically, Astro-Darien is conceived as a kind of reverse storytelling, hearkening back to the late-seventeenth-century colony of Darien in Central America, whose failure led to the near-bankruptcy of Scotland and its subsequent integration into the United Kingdom in 1707.

Only in Astro-Darien, it’s not the coming together of the UK that provides the narrative foundation, but its seemingly inevitable breakup, with Scotland once again becoming a fully independent nation.

In other words, Escapology represents this native Glaswegian’s attempt to imagine a future for his homeland outside of the United Kingdom, a post-Brexit exit.

This isn’t just speculative fiction along the lines of Philip K. Dick’s The Man in the High Castle, which imagines what might have happened if the Axis had won World War II, but the self-consciously futuristic sort, which is perfectly suited to Kode9’s approach to musical composition.

Like the groundbreaking 2006 album Memories of the Future he made with The Spaceape, Escapology often sounds like ambient recordings from a society that is more technologically advanced than ours, but possibly no saner.

The former permitted listeners to frame its sonic textures with The Spaceape’s spare, poetic lyrics, rendered more impactful by his classic reggae patois. But the new record lacks such a device.

As the title of “Torus”, one of the record’s bouncier tracks, suggests, Escapology confronts us with an auditory experience in which determining the distinction between inside and outside feels impossible. It doesn’t help that the story of Astro-Darien can only be discerned as negative space, a leaving of room for our minds to imagine what it cannot communicate directly.

The confusion this inspires is surely deliberate, a way to prepare us for the storytelling to come without giving too much away. But it can also be frustrating.

My favourite track, the eponymous “Astro-Darien”, comes closest to channelling the Blade Runner sound that made me fall in love with Memories of the Future way back when.

Like Vangelis’s iconic score for that 1982 film, however, it feels decidedly incomplete on its own. Whereas the Blade Runner soundtrack had the film’s remarkable visuals to flesh it out, however, “Astro-Darien”, like Escapology’s other tracks, is destined to remain something of a cypher until Kode9 releases the story itself.

So why release it now?

Certainly, Escapology functions as a teaser, priming listeners for what is to come. Yet I do not believe that Goodman intended the record as a mere preview.

On the contrary, its formal qualities indicate that he wanted listeners to register its incompleteness as a physical sensation, to feel the breaking up of the United Kingdom in addition to thinking it. And to register its full emotional impact before speculating about what might come next.

It has never been easier for artists to explain their intentions and be sure that their words will be widely available. This is leading to works which, whatever their discrete manifestations, imply the existence of a whole greater than the sum of their parts.

More often than not, however, this proves to be an illusion, since the facility for project management required to pull off this feat is in short supply.

As a consequence, we are left with fragments that promise more than they could ever deliver. In other words, the parts are actually more impressive when kept apart than when they are linked together.

German Romanticism celebrated a cult of the fragment, one that has persisted through the subsequent 200+ years since. It’s both entertaining and instructive to think about. And, to the extent that Escapology partakes of that aesthetic strategy, an interesting way to reflect on the record’s strengths and weaknesses.

But I’m not convinced that Steve Goodman was ever a true believer. Even though every one of his records has communicated a sense of fragmentary existence, I don’t think he wants listeners to fetishise their incompleteness.

His statements about Astro-Darien demonstrate a commitment to seeing things through, a trait he has long been known for as the head of Hyperdub. If we are acutely aware of the negative space that Escapology is conjuring, it’s not because of some sleight of hand.

On the contrary, he wants us to hear what is missing, both in a literal and figurative sense. And he wants us to long for a solidarity that is more political than aesthetic.

It must also be noted that Escapology, like its tendentiously titled 2015 predecessor Nothing, is a record that conveys a powerful sense of mourning.

Kode9 didn’t try to find a substitute for The Spaceape, which would have been a classically melancholy gesture, trying to hold on to what was already gone. Rather, he was content to leave the room that The Spaceape’s voice might have filled uncluttered to the point of overwhelming loneliness.

If this makes the record a little less satisfying as music, it also makes it more satisfying as a commentary on the impulse to make art.

Walter Ruttmann’s 1927 film Berlin: Symphony of a Metropolis is strangely suited for these times, when traditional moviegoing is in perilous decline, providing a way to disentangle the art of cinema from that mode of consumption. END_OF_DOCUMENT_TOKEN_TO_BE_REPLACED

That the first song on Soulside’s new LP ends with a sample from a 1952 American civil defence film Duck and Cover, about a nuclear apocalypse, says it all. END_OF_DOCUMENT_TOKEN_TO_BE_REPLACED

Based on the flurry of academic titles about it over the last decade, punk has become as common to college curriculums as it is to the Top 40. Why this took so long is baffling. END_OF_DOCUMENT_TOKEN_TO_BE_REPLACED