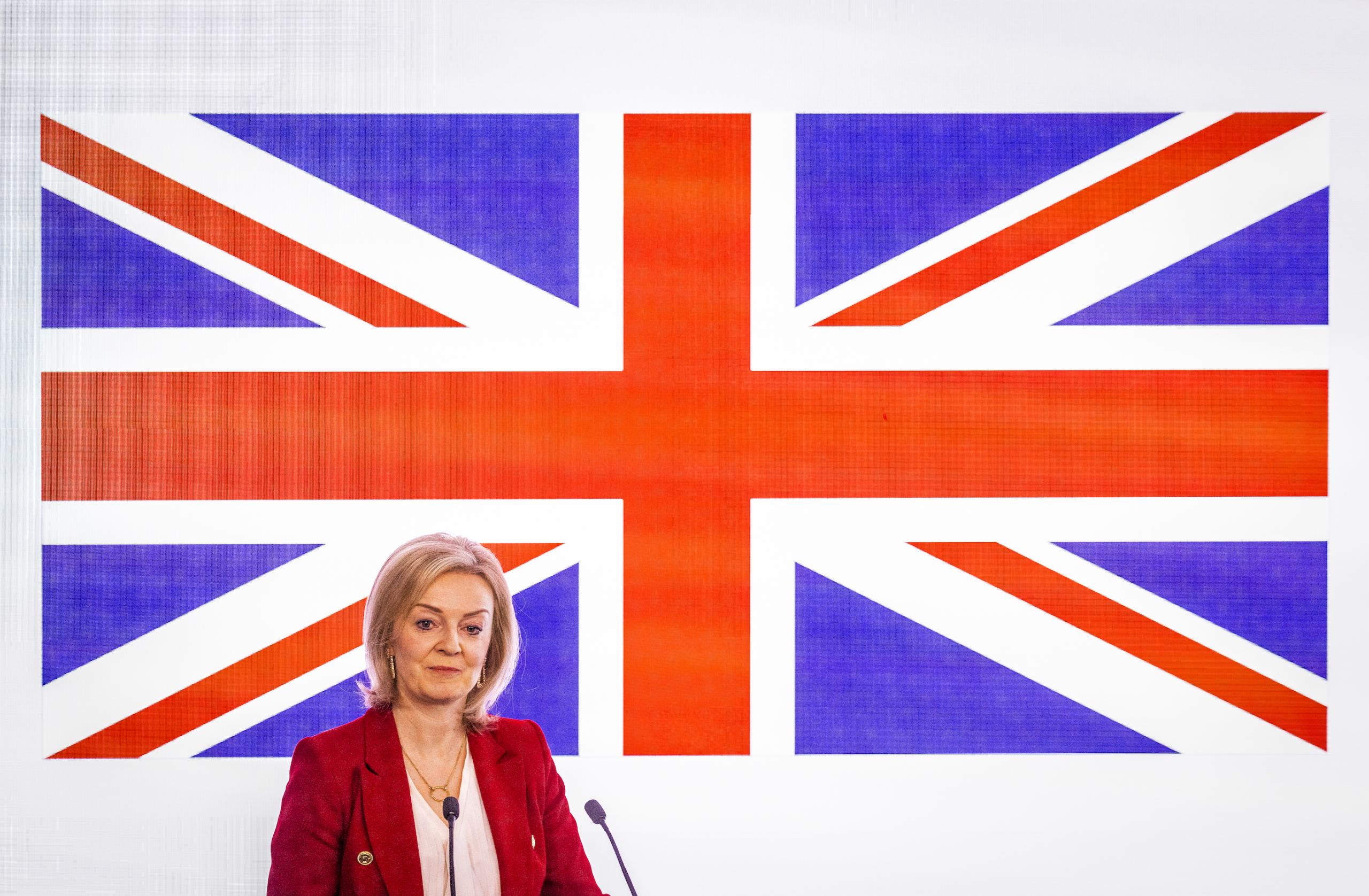 Invest in the wealthy: Liz Truss at the London Stock Exchange.

The UK is in a permanent state of disrepair and there’s a new chancer in charge. Boris Johnson is gone, but Truss will ensure Tory misrule continues.

172,000 members of Britain’s ruling Conservative party decided the fate of the country in this leadership election.

Once in Number 10, Truss has no obligation to call a new poll for the country of 67.5 million.

Liz Truss can take the 2019 mandate, that brought Boris Johnson to power, to rush through whatever she likes.

But the UK’s new premier faces a brutal test.

The coming winter is set to bring the worst energy crisis in decades. Over 12 million are facing fuel poverty as the energy price cap is set to raise in October.

Riots are a very likely outcome should the Conservative government refuse to intervene to bring down energy prices. The country is staring down the barrel of a recession coupled with ever-rising inflation.

Imagine choosing between feeding your kids and keeping them warm.

Many working people will have to turn to food banks given the rate of inflation and energy costs. Desperate Britons will turn to even more desperate measures.

This is why the police are quietly preparing for a rise in crime and even civil unrest. No doubt Tory strategists are thinking about this too.

We’re about to find out whether Truss has more convictions than sense.

The prime minister is about to be confronted by a cold, hard reality: the winter crisis will cost lives and it could cost the Tories their stranglehold on power.

The UK is due a general election by 2024. Time is running out for the Conservatives. And the human hand grenade (as Johnson called her) has no new ideas.

Once upon a time, Liz Truss was a Liberal Democrat who believed in the abolition of the monarchy, the legalisation of cannabis and presumably many other sensible things.

All of this changed when Truss converted to Toryism in 1996. Maybe she was mugged by reality like so many others.

However, there is more continuity than discontinuity: the premier was a member of the libertarian Hayek Society in her Oxford days.

During the leadership debates, Liz Truss has tried to embody Thatcherism to the point of wearing the same outfit to a debate.

Yet her campaign had a very different message.

Margaret Thatcher’s worldview was austere, bleak and punitive. She appealed to the sadomasochism of public school boys and working-class Tories alike.

We all had it too good thanks to the welfare state. That was Maggie’s message.

The Tory leadership campaign was defined by a race to the bottom in tax pledges and culture war rhetoric about trans people and immigrants. We had to watch all of this unfold without any say in the matter.

Many Conservative Party members view Rishi Sunak as a de facto ‘fiscal socialist’ responsible for outrageous public spending and “handouts” during the lockdowns. Yet the party supported austerity for most of the last decade.

Cutting public spending is fine when it destroys schools, hospitals and libraries, and makes life worse for millions of working-class people. But a modest rise in national insurance that hits the middle classes is unacceptable.

Whereas Truss pitched easy answers, Sunak stuck to the rhetoric of “difficult decisions” about public spending and inflation. He wanted to pick up where George Osborne left off. But the space for austerity politics has closed.

Liz Truss combines Thatcher’s bleakness with the fiscal politics of Reaganism. She wants to change society for the worst, but doesn’t give a damn about deficits.

Margaret Thatcher enacted stringent austerity measures upon coming to power – leading to intense riots across Britain in 1981 – which would have brought her government down had it not been for a global economic recovery.

When Maggie came to power, the top rate of income tax was 83%. She first lowered it to 60% and then waited almost a decade before cutting it to 40%. Thatcher also gradually cut the corporation tax rate from 52% to 35%.

By contrast, the Reagan Administration splurged huge amounts of public money on military infrastructure and slashed the top rate of income tax from 70% to 28%, generating vast deficits for the next government to deal with.

There was no gradualism with Reaganism. It was a fantastically short-term strategy of tearing through red tape and boosting growth through supply-side measures. This was a far cry from the age of austerity.

Fiscal conservatism is for the poor, not the super-rich and the national security state. Except the US in the early 1980s could afford such a strategy, as Reagan could count on growth today at the expense of tomorrow. This is not the case in the UK in 2022.

Prime Minister Truss will not be able to restore vitality to British capitalism because her prescription is why the UK economy is in a shambolic state.

Twelve years of Tory misrule has left Britain far worse off in every way than it was in 2010. By all indications, Truss will simply continue this downward spiral.

What’s clear is that austerity is dead. The next Conservative government will continue to run a huge deficit to feather the nests of its constituents, while public services crumble. But this does not mean life will get better for most people.

The class basis of Trussonomics is real, just as it was for Reaganomics. We may need a new growth model, but the government has a stake in keeping the old, failing model going.

Many Conservative voters are middle-class people earning average salaries, but they happen to own some assets which give them a stake in the UK’s financial and property bubbles.

A significant chunk of the Tory electorate (and membership) are pensioners who own their own homes and this allows them to live much better on an average or even low income.

These constituents were insulated from austerity by those assets, coupled with low-interest rates. The other factor was preferential tax treatment for the middle classes and, naturally, the rich.

This started to change during the COVID-19 pandemic. The Johnson regime committed the ultimate Tory sin: it raised taxes on middle-class people and even multinational corporations.

Liz Truss wants to reverse this trend. She is pledging £30 billion in tax cuts from the starting line. This includes dropping the planned corporation tax increase to 24% and canning the national insurance increase.

She has also pledged a 5% cut to VAT (which will cost the Treasury a fortune). This measure will not be enough to reduce inflation. The crisis is set to continue for the foreseeable future.

The Bank of England has decided to tip the UK economy into recession by hiking up interest rates.

The strategy (which is barely concealed) is to reinforce wage restraint and reduce the bargaining power of workers in an economy with very low unemployment.

Meanwhile, Truss has indicated she might review the independence of the Bank of England. This is consistent with her populist appeal to the most hardcore Conservatives.

Yet the premier is not going to take on the Bank of England for trying to maintain a low-wage economy. She is doing it because the bank has raised interest rates, hitting the homeowners who vote for the Conservatives.

Despite her ignorance, Liz Truss knows what the Tory base wants. Party members have cheered on her posturing over nuclear weapons and support for fracking over solar power.

Just like Theresa May did, Truss said it was her “duty” to use nuclear weapons in certain circumstances. The Tory death drive calls for militarism and climate breakdown, and she will deliver.

At the same time, Liz Truss could surprise the cynics if she’s able to alleviate the energy crisis and pursue a tax-cutting agenda. The problem for her is how to finesse the contradictions between her economic policies and her electoral strategy.

British capitalism has been running on fumes for years, and the Conservatives have failed to establish a new growth model because the old model still works (for them). The rest of us are stuck with stagnating living standards and crumbling institutions.

Furthermore, the Tories have shown they’re willing to put everything on the line for electoral success.

Far from a break with this record, Truss will just take it to new lows.

Brexit will turn three on the last day of January, over six years since the 2016 referendum kickstarted Britain’s race to the bottom. END_OF_DOCUMENT_TOKEN_TO_BE_REPLACED

Be careful what you wish for. It may be a cliché, but it’s one the Greens are learning all over again. END_OF_DOCUMENT_TOKEN_TO_BE_REPLACED

Before his arrest, Andrew Tate was just another influencer with bad politics. END_OF_DOCUMENT_TOKEN_TO_BE_REPLACED