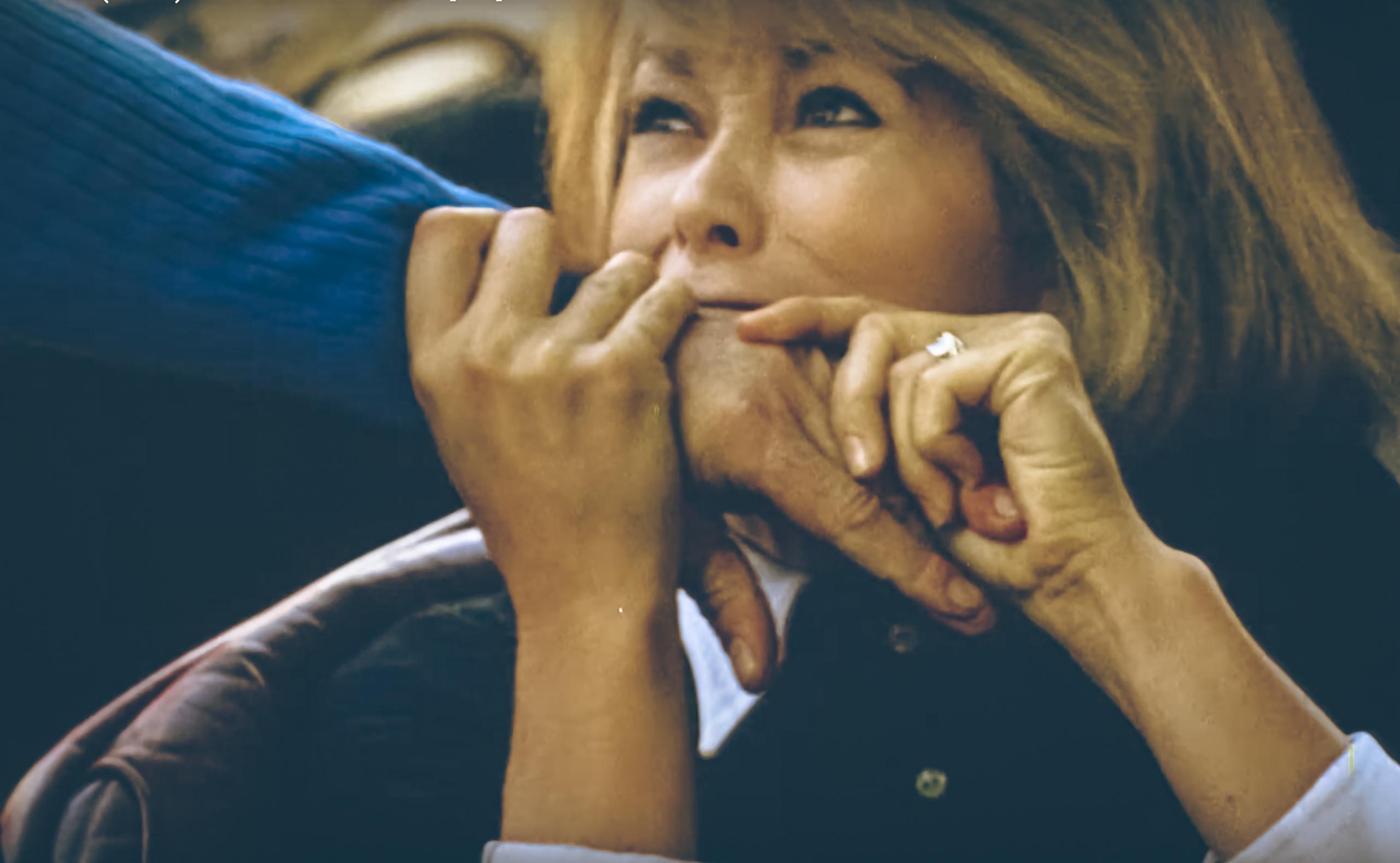 Bite the hand of patriarchy. Mireille Darc, in Weekend (1967).

After surviving increasingly over-the-top carnage on the roadways leading out of Paris, the unlikeable couple we’ve been following since the beginning, now carless, gets picked up by a yellow lorry.

The film cuts to one of the intertitles for which Godard was famous, blue type on a black background, that reads “ACTION MUSICALE”.

At this point, the camera begins panning across a farmyard to the accompaniment of a solo piano piece, soon revealed to be Mozart by a voice coming from outside the frame.

A few seconds into this tracking shot, the unlikeable couple appears. The man leans against a telephone pole in his bloodstained shirt while his companion, now wearing a fedora and the blue sweater she took from another man, sits at his feet.

As the shot proceeds, we can make out the sort of sights one expects to find in this rural setting —  weathered outbuildings; tractors and other farm equipment; various people dressed in humble workers’ garb — as well as some that seem strange — another young couple, who seem to have emerged from the main house, dressed in an emphatically metropolitan style; people posing like motionless figures in a frieze; an excessive quantity of red oil barrels, some of them clearly branded with the Esso logo.

Eventually, the piano music that initially seemed to be coming from outside the narrative is revealed to be part of the diegesis, minimal though it may be, when the camera temporarily halts in front of a dapper middle-aged gentleman playing from a score while a woman stands at his side to turn pages for him, the grand piano incongruously situated outdoors like everything else in this sequence.

Then, to our surprise, the camera begins to make another pass through this sleepy scene, confirming that it wasn’t just moving laterally, but turning on its axis, revealing a full 360 degrees.

After stopping once more at the man playing piano, the camera then reverses direction and pans back through the farmyard until coming to a rest in front of him for a third time. Altogether, this seemingly uninterrupted tracking shot lasts over seven minutes.

Given that Jean-Luc Godard was famous for using many rapid cuts in his work, their absence here is especially noteworthy. Because we have been trained, on an almost entirely unconscious level, to forget the tricks used to make the filmmaking apparatus disappear, their absence has the opposite effect.

Suddenly, we become aware of how nearly all the films we have ever seen took advantage of this ideological mechanism.

Moreover, this perception is powerfully reinforced by the fact that the tracking shot crosses the imaginary line that is supposed to divide the act of filming from what is being filmed.

In other words, by showing us a 360-degree view, three times over, this sequence destabilises the ideological mechanism at the heart of traditional narrative cinema. Even though we never see the camera, we are acutely conscious of its presence.

While I could not have described this interlude so clearly the first time I watched it, I definitely registered its impact.

I was in my second year of graduate school at UC Berkeley and just beginning to read the abstruse left-wing film theory of the 1960s and 1970s. Although I found most of this material quite challenging, I could at least discern which kinds of sequences lent themselves to exploring the key concepts.

And it was immediately clear to me that this sequence in Weekend – along with numerous others — was perfectly suited for analysis of the way traditional narrative cinema was supposed to work, precisely because Godard was breaking so many of its rules.

That’s why I sat there on the couch at my apartment in Vallejo, California, rewinding the VHS tape to the beginning of the sequence five times in succession, thereby turning my initial impression of it into detailed knowledge.

I noticed how the piano music seemed to be coming from a soundtrack outside the narrative until its source was revealed.

I noticed which figures stay in one place throughout and which changed their positions.

I noticed how the many oil barrels scattered throughout the farm yard subtly underscored the relationship between fossil fuels and violence that the film’s panoply of car crashes made almost too obvious to grasp.

And, most of all, I noticed that, while the man in the bloodstained shirt continued to be leaning against the telephone pole each time the camera captured him, his companion somehow managed to move to another location across the yard, underneath one of its sheltering awnings, then make it back to his side by the camera’s final pass without her movement being detected, as if she had rushed over and back while it was facing in the opposite direction.

Although I couldn’t decide whether this last detail was meant to communicate something specific — either about her or Weekend’s broader point about the decadence of postwar society — I understood very clearly that it could make viewers watching the film for the first time uneasy without them being able to explain why, thereby reinforcing its disquieting impact.

When Weekend came out in 1967, the only way to become fully conscious of what happens in a sequence like this was to go see the film over and over.

Rewinding was something that only filmmakers could realistically do, not moviegoers. That explains the heavy-handedness for which Jean-Luc Godard has been criticised, even by devoted acolytes.

In order to achieve his goals, the director had to be sure that even one-time viewers would recognise that he was breaking rules that they had internalised without realising it. But he also needed to reinforce his points in less obvious ways, so that repeat viewers, the ones who were paying close attention, would be rewarded for their efforts.

I think it’s safe to say that no filmmaker has ever done a better job of working on these two levels simultaneously than Jean-Luc Godard.

No matter how obvious his work seems — a quality which his contemporary detractors, such as the Situationists singled out for scorn — it is invariably underpinned by subtleties that can only be fully comprehended by someone willing to watch his films over and over, whether by making repeated trips to the cinema, as was necessary in the 1960s, or using consumer technologies, like rewinding a tape or scrolling back through a stream, which his work eagerly anticipated from the beginning.

Godard’s political commitments distinguished the content of his films from his best-known nouvelle vague rivals, not always in ways that have aged well.

But his dedication to exploring the politics of cinematic experience itself, at a formal level, accomplished far more than the revolutionary posturing we see in Weekend or his other films of the late 1960s.

As we celebrate Jean-Luc Godard’s legacy now, it is crucial that we pay heed to this distinction. Because, no matter which of his films we decide to examine in detail, there is a very good chance that the details we register the first time go hand in hand with ones we might not consciously perceive until the second, fifth, or even tenth.

Like great poems or novels, Godard’s films stand the test of time because they provide an inexhaustible reservoir of things worth noticing. No one did more to make revisiting films worthwhile, whether his own or ones he helped us see in a new light.

The best testament I can offer for his unprecedented achievement is that I remembered the sequence I described from Weekend so clearly that, when I watched it again yesterday, for the first time in three decades, I could anticipate the smallest details — the orange colour of one man’s shirt, the way another man has his hand on his hips, the illuminated dust motes that float in front of three older women in peasant attire — before they appeared on screen.

The 1970s was a decade of broken dreams. The end of the postwar boom brought to a close the era of middle-class liberalism in Europe and North America. END_OF_DOCUMENT_TOKEN_TO_BE_REPLACED

Serbian director Dušan Makavejev’s 1968 film Innocence Unprotected manages both to explore the legacy of wartime trauma seriously and to make fun of itself in the process.  END_OF_DOCUMENT_TOKEN_TO_BE_REPLACED