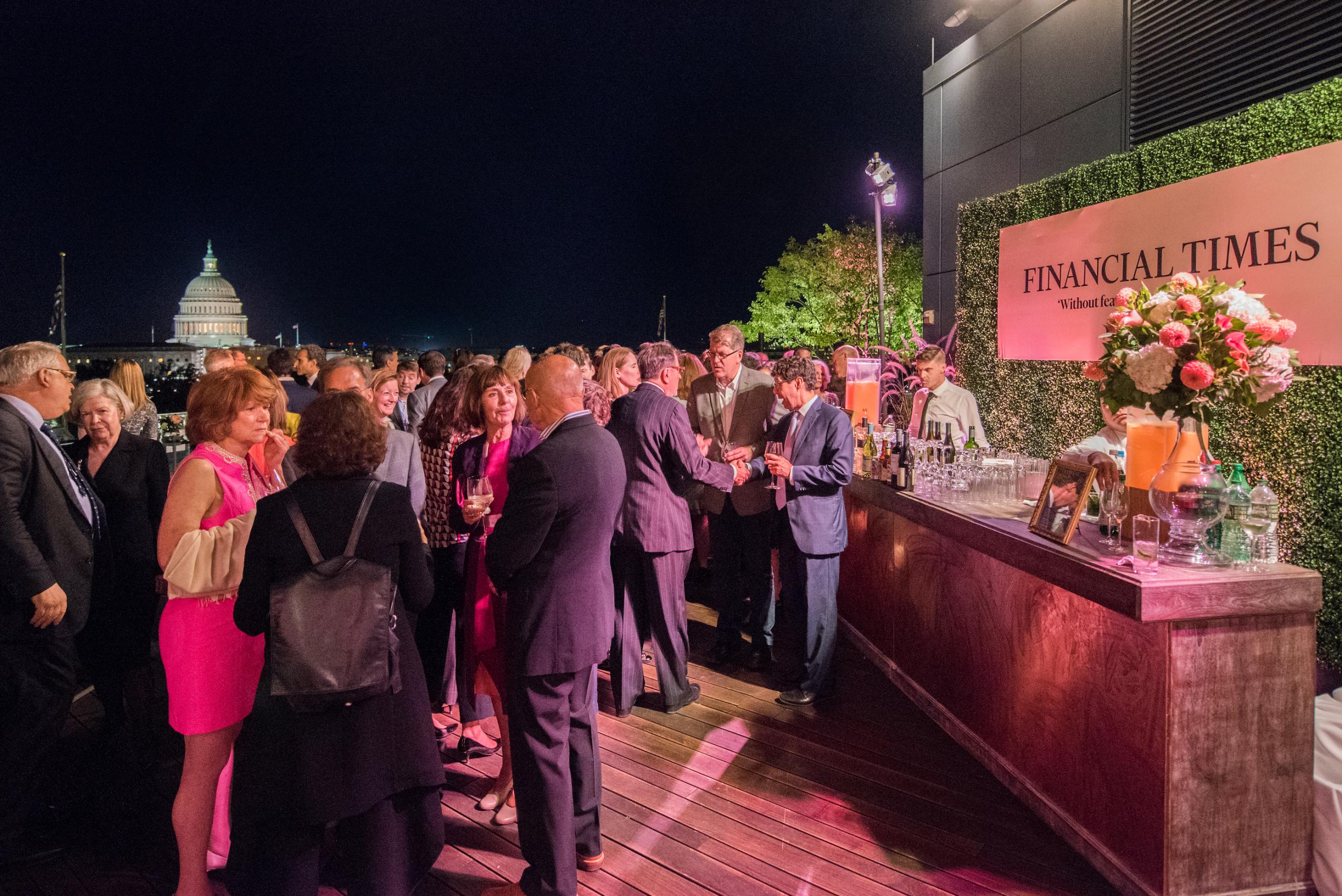 This Grade II listed building on Friday Street is the home of the Financial Times.

Most British newspapers used to have grand offices. Today many publications reside in sterile, airless offices, where ink stains of hot type have been replaced by the clean precision of old type.

Maybe the Financial Times has the best of both worlds: cold type with grand architecture. The building itself is a piece of modern classicist design complete with pink sandstone bricks and Verdigris roofing.

Owned by The Nikkei, Japan’s highly successful financial newspaper, the FT can afford more than just an impressive office.

The Financial Times can back investigative reporting and specialist coverage of the kind lost across the UK media industry.

As a result, the Financial Times is one of the best English language newspapers in the world.

There are few publications that compare, even in business media. The Wall Street Journal pales by comparison with its often half-witted and deranged editorial line.

The cliché is that FT coverage is the ruling class talking to itself.

It might be more accurate to say that the Financial Times platforms the ruling class talking to itself from time to time. But the newspaper is written for the bourgeoisie.

A Chinese ambassador in Africa was asked why he was carrying the paper. “We always read the FT in the embassy because capitalists never lie,” he explained.

Editor Lionel Barber was no doubt gleeful to include this anecdote in a feature celebrating the newspaper’s 125thanniversary.

However, it would be wrong to pretend that the Financial Times is a perfect truth-teller and has no ideological agenda.

The FT is no different and it channels a certain worldview. But its audience has an interest in the realities of capitalism.

You can learn a lot flicking through the salmon pink pages of the Financial Times.

It’s the daily newspaper for the people who own the world. Every smart bourgeois reads it, and every socialist should read too.

The late trade union leader Bob Crow read two newspapers: The Financial Times alongside the Morning Star, while Noam Chomsky reads the FT before anything else in the morning.

The reasons are obvious.

Although the editorial line may be centre-right market liberalism, the newspaper provides superb international coverage and political analysis alongside in-depth coverage of economic trends.

The Financial Times has not run with non-stop royal succession coverage after Queen Elizabeth II died, for example, while the rest of UK media is still running 24-hour coverage.

For almost 135 years, the Financial Times has provided high-quality news coverage to the business class. The London Financial Guide, as it was originally known, was first established in 1888.

At the time, the City of London lacked reliable sources of financial news and the Financial News was founded in 1884 to serve this very purpose. But the London Financial Guide was soon on the scene and the editors were eager to make it stand out.

Since 1893, the Financial Times has been printed on pink paper. Initially the London paper was trying to distinguish itself from its rival but it soon became a key part of its image.

Everyone knows you’re carrying the FT by the colour of its pages.

The Financial Times and the Financial News would compete with each other for more than 50 years. Eventually the two newspapers were merged in 1945 thanks to Brendan Bracken (thus Bracken House). The result was a single six-page financial newspaper.

The story of the Financial Times post-war maps the rise of neoliberalism and globalisation.

In 1979, the paper was ahead of most UK newspapers in that it found a strategy for escaping the reach of print unions: the FT launched a print edition in Frankfurt.

Two dozen print sites were opened worldwide. Since then the Financial Times has gradually become a global media operation with a US edition, a European edition and an Asian edition.

It isn’t just a British newspaper anymore. Nor has it been for some time.

Somehow the FT remains a British newspaper, but with global reach.

The politics of the Financial Times are very much rooted in progressive market liberalism and the paper has long supported the Conservative Party.

Yet this centre-right business paper is not just another Tory media organ.

The FT broke with the Conservatives in 1992 and supported Labour in elections until 2010. It continued to back the Tories until 2015 and chose to back no party in 2019.

During the Blair years, the Financial Times opposed the invasion of Iraq at a time when much of the UK media was supporting the government line.

That being said, the FT supported the US war on Afghanistan.

His view was simply that the war was a just means to overthrow dictator Saddam Hussein. Nevertheless, the Lloyd view did not prevail.

The 2008 financial crisis was a rude awakening for Financial Times readers.

It was a shock that ended a 16-year boom in the UK, but it spelled the end of the neoliberal era. This challenged the idea of irresistible progress that had taken hold among Western elites.

Capitalism looked like it was still going to be a crisis-ridden system. Maybe the system couldn’t be stabilised after all. Boom and bust were the norm, but worse things were coming.

During the eurozone crisis, the Financial Times sided with European institutions on Greek debt.

FT writers like Gideon Rachman were emphatic that Europe must not allow the Greeks to get away without paying their debts.

By contrast, FT columnist Martin Wolf wrote more sympathetically of the SYRIZA government given that the EU was demanding too much austerity without a serious solution to the debt crisis.

Generally, the Financial Times platformed the most belligerent austerity hawks on the Greek crisis but some FT journalists were outraged. Wolfgang Münchau was appalled at the brutality of the creditors.

By 2015, the world was looking more fractious. Donald Trump was running for president, and Jeremy Corbyn had become Labour leader, while the UK was about to hold a referendum on Brexit.

Financial Times readers were in for a very rocky ride over the next few years.

Unsurprisingly, the FT was not supportive of the Corbyn project though its coverage lacked the hysteria and slanders of the rest of the British media.

Likewise, the Financial Times has long been consistently against Brexit given its alignment with international finance. The loss of EU passporting rights was a major issue for the UK financial sector.

By 2019, the newspaper refused to endorse any party in the general election.

Opposed to both Tory nationalism and socialism, the FT’s editors felt they had little choice but to keep their hands clean in a sordid campaign.

Of course, the Financial Times initially found Keir Starmer more hopeful but has since entertained strange fantasies of Wes Streeting seizing the reins in the near future.

Whatever the virtues of the FT (and there are many), the newspaper is still wedded to the illusions of the centre-ground and those illusions have been challenged for several years.

The Financial Times has to be aware of the class position of its readership precisely because of the service it offers.

It’s not just that the FT provides news. The newspaper sells its audience to businesses and vice versa.

This includes more than 7 million people in the UK alone.

According to the FT’s 2020 survey, 62% of its readers are business decision-makers and 32% are C-suite executives while 23% are technology decision-makers.

Almost 80% of the newspaper’s readers work for multinational companies.

Financial professionals are the core audience at 31% of the readership, but they are followed by professionals in such industries as accounting and consulting (16%), as well as manufacturing and engineering (14%).

Yet the Financial Times provides more than high-quality reportage for such readers.

One of its supplements, How To Spend It, caters to the expensive tastes of a core part of the FT’s audience: high net worth individuals.

Sadly, How To Spend It has been reduced to an initialism (HTSI) to take the edge off of its forthright title. They could still do better if you ask me.

According to the newspaper’s 2020 survey, 96% of its readers own real estate and 65% own designer clothing.

These are the readers who open HTSI and peruse features about Lamborghini tractors, the latest yachts and lightning-fast electric cars.

My personal favourite was the 2019 article about Fight Club author Chuck Palahniuk’s collection of skulls.

Apart from some eccentric articles, HTSI covers luxury goods for its audience.

There are simple ways of understanding this little magazine. As racketeer Arnold Rothstein once said: “Money talks. The more money, the louder it talks.”

As much as the Financial Times delivers excellent journalism, the newspaper is not intended to be read by working class people.

The difference with many other right-wing newspapers is that the newspaper doesn’t pretend it’s for the worker. It’s the boss’s paper.

Photograph courtesy of the Financial Times. Published under a Creative Commons license.

Brexit will turn three on the last day of January, over six years since the 2016 referendum kickstarted Britain’s race to the bottom. END_OF_DOCUMENT_TOKEN_TO_BE_REPLACED

Be careful what you wish for. It may be a cliché, but it’s one the Greens are learning all over again. END_OF_DOCUMENT_TOKEN_TO_BE_REPLACED

Before his arrest, Andrew Tate was just another influencer with bad politics. END_OF_DOCUMENT_TOKEN_TO_BE_REPLACED