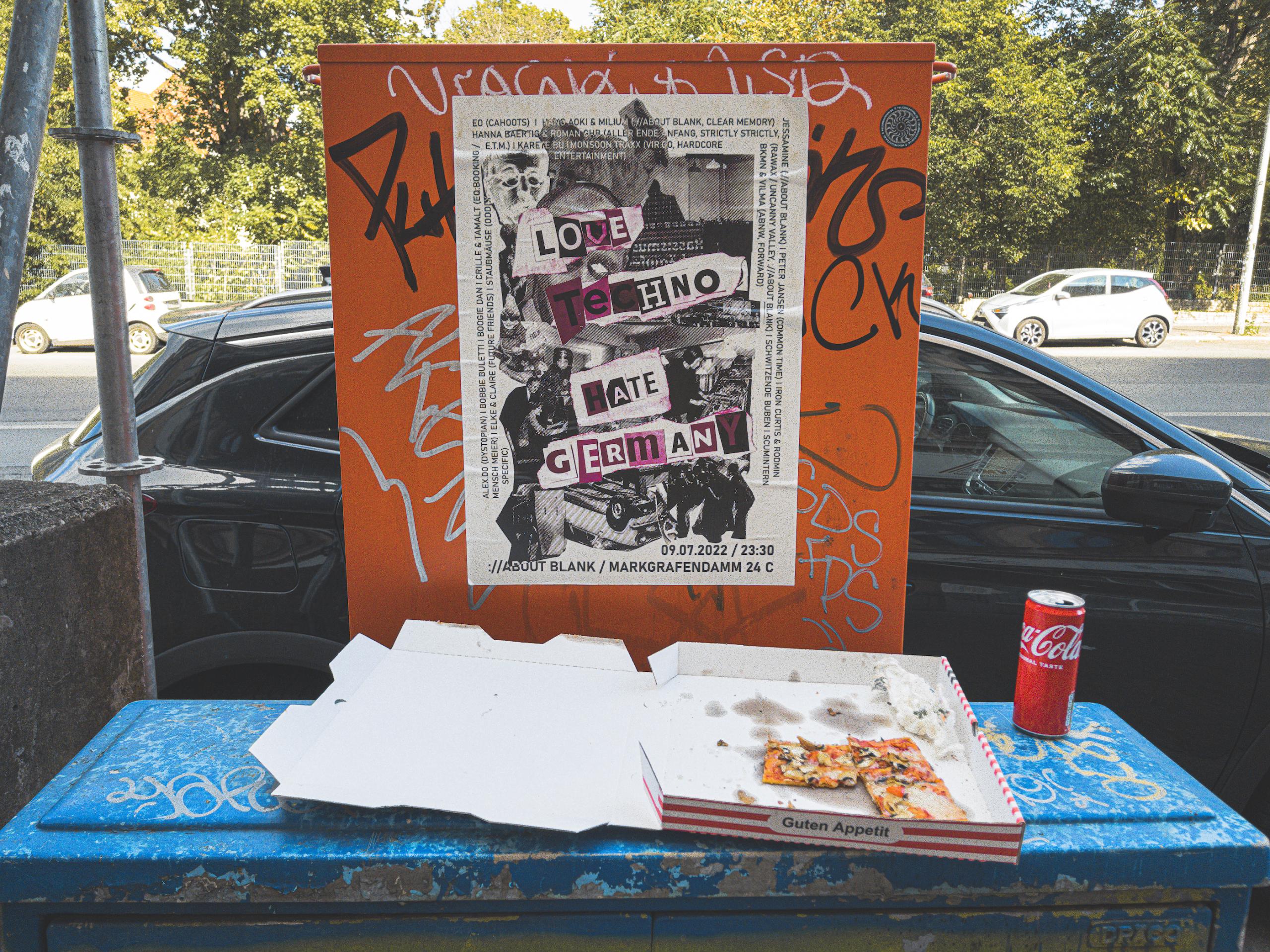 While it would be a stretch to call any of their songs happy, ÖPNV inspire hope for a future where culture won’t be reduced to a corporate accessory.

Not surprisingly, they do this by returning us to the past.

Although the album doesn’t sound exactly like any of the major independent bands of Berlin’s post-punk heyday in the early 1980s, it contains elements that recall the music of most of its major figures: Einstürzende Neubauten, Malaria!, Die Tödliche Doris, Nina Hagen.

That period, one which was largely defined by ideological retrenchment and economic stagnation throughout the developed world, gave us scenes which have somehow managed to retain their excitement four decades later, even as more recent ones have been completely drained of life by the re-commodification of the internet culture industry.

Maybe it’s because the rules that bands like those were breaking back then persist, if in different forms. Maybe it’s because they were self-consciously struggling against the passive listening that dominates the consumption of popular music more than ever, with even great songs reduced to background for television commercials or the nano-films of TikTok.

Back in the early 1980s, refusing to play by the rules was a form of productive self-marginalisation, giving up any hope of mainstream success for a word-of-mouth notoriety that inspired a small, but loyal following.

These days, the consequences for transgression are different. It’s almost impossible to push the buttons that post-punk experimenters did, because they long ago wore out.

While mainstream success seems just as impossible as it did then, the reason now is that almost nobody achieves it anymore, since record sales have shrunk dramatically. Most of the time, the best way to achieve notoriety is through forms of expression that have little to do with music.

When a band makes a record like Deutsch Funk Revolte today, therefore, the point is not so much to open minds to new aesthetic ideas, but to reconnect us with a time when it still felt possible to do so.

Rock and roll has never been less relevant, at least aside from reinforcing the identities of people on the wrong side of fifty.  While it still manages to transcend nostalgia culture in subcultural genres like punk and metal, they tend to be rule-bound, defined by what they exclude.

Only post-punk seems capable of inspiring music that sounds new. The paradox, however, is that many of the bands that build on its legacy only sound new because they sound old.

Like the “New Music” of Modernist composers Arnold Schönberg and Alban Berg which was celebrated for its novelty decades after it had been written, post-punk has a peculiar relation to the past.

Even if Deutsch Funk Revolte avoids the sort of extravagant reference-dropping that makes many self-consciously postmodern works tedious, the mere fact that it sounds a good deal like records that anybody with a passing interest in post-punk can call up in seconds, for free, guarantees that it will be received in a historicist mode.

This is simultaneously boon and bane. On the one hand, because we are consistently reminded of ÖPNV’s links with a distinct period, it is much easier for us to situate their work in relation to broader trends in society, both in the present and the past.

On the other hand, however, listening in this manner tends to reduce music to a reflection of its context instead of experiencing it in a visceral way.

If it were possible to hear Deutsch Funk Revolte purely on its own terms, the sun behind those clouds would give more warmth.

The syrup-thick bass lines of American expatriate Sean Sutton that make songs like “Shanghai Dreams” danceable; the way Hansol Kim’s drums stretch the rhythm section’s dynamic range; the hissing and crackling sound effects that surge and ebb throughout the record, adding texture to Maria Nesterowa’s synth work; the snippets of social analysis that introduce some tracks; and Markus Krüger’s echo-drenched vocal rants: all make the album a pleasure to listen to many times over.

Ultimately, though, ÖPNV evokes the early 1980s too forcefully to be listened to in that manner. Instead, we are left to wonder what to make of the historical parallel that they conjure.

Krüger’s lyrics, delivered in a style strongly reminiscent of The Fall’s iconic Mark E. Smith, and the interpolated vocal clips that begin some tracks suggest that he wants to communicate something about the difficulties he confronted in his research as a kind of urban planner, specialising – as the band’s name indicates – in research on public transportation. That may not sound particularly sexy. But it is definitely important in a way that traditional themes of rock and roll music are not.

One of the innovations of post-punk was to dispense with listeners’ expectations. Everything was permitted, whether outlandish or nerdishly oblique. When we revisit records from that time, many of the best ones sound like zines, perversely eclectic explorations of niches that the mainstream media had overlooked. Deutsch Funk Revolte achieves a similar effect, though one that resonates differently.

For a while, when the internet had not yet been mutilated by corporate capitalism, it seemed as though it would serve a similar function as zine culture, only on a vastly more massive scale.

With rare exceptions, however, that possibility has been lost, with the consequence that individuals who care about free expression have returned to the production and exchange of hardcopy zines. That subculture is exploding once again, in spite of its striking most people as dated.

Deutsch Funk Revolte also gets us thinking about the discrepancy between the way the early 1980s are recalled within mainstream culture and what they were actually like for those who lived through them.

If the culture of that period seems particularly close to us right now, it is likely for reasons that the vast majority of people born since then will struggle to comprehend. Because even when a massive international hit like Netflix’s Stranger Things seems to get most of the details right, the way it felt to live back then is missing.

The thing that kind of nostalgia forgets – though usually not in a conscious sense – is how relentlessly bleak things seemed to anyone who still believed in progress that was qualitative as well as quantitative. It’s no accident that the technological innovations for which that era is now regarded so fondly tended to be portrayed in a dystopian manner at the time.

What else is cyberpunk, after all, then a vision of the future in which the prosthetic devices of humankind end up putting the good life further out of reach?

When Time magazine made the personal computer its “Man of the Year” in 1982, the implication could not have been less subtle. Either we were going to be replaced outright, or we were going to have to learn to subordinate ourselves to our new masters.

At a time when we are being constantly bombarded by advertisements that tout technological enhancements to everyday life, for everything from electric vehicles to AI-generated “friends” who will keep us company when real people will not, it is crucial to bolster our scepticism by remembering that it was present from the beginning, when the horrors of our socially mediated world were just beginning to appear on the horizon.

When the intellect can muster only pessimism, it’s left to the will to peer into the clouds and perceive a better future.

Walter Ruttmann’s 1927 film Berlin: Symphony of a Metropolis is strangely suited for these times, when traditional moviegoing is in perilous decline, providing a way to disentangle the art of cinema from that mode of consumption. END_OF_DOCUMENT_TOKEN_TO_BE_REPLACED

That the first song on Soulside’s new LP ends with a sample from a 1952 American civil defence film Duck and Cover, about a nuclear apocalypse, says it all. END_OF_DOCUMENT_TOKEN_TO_BE_REPLACED

Based on the flurry of academic titles about it over the last decade, punk has become as common to college curriculums as it is to the Top 40. Why this took so long is baffling. END_OF_DOCUMENT_TOKEN_TO_BE_REPLACED