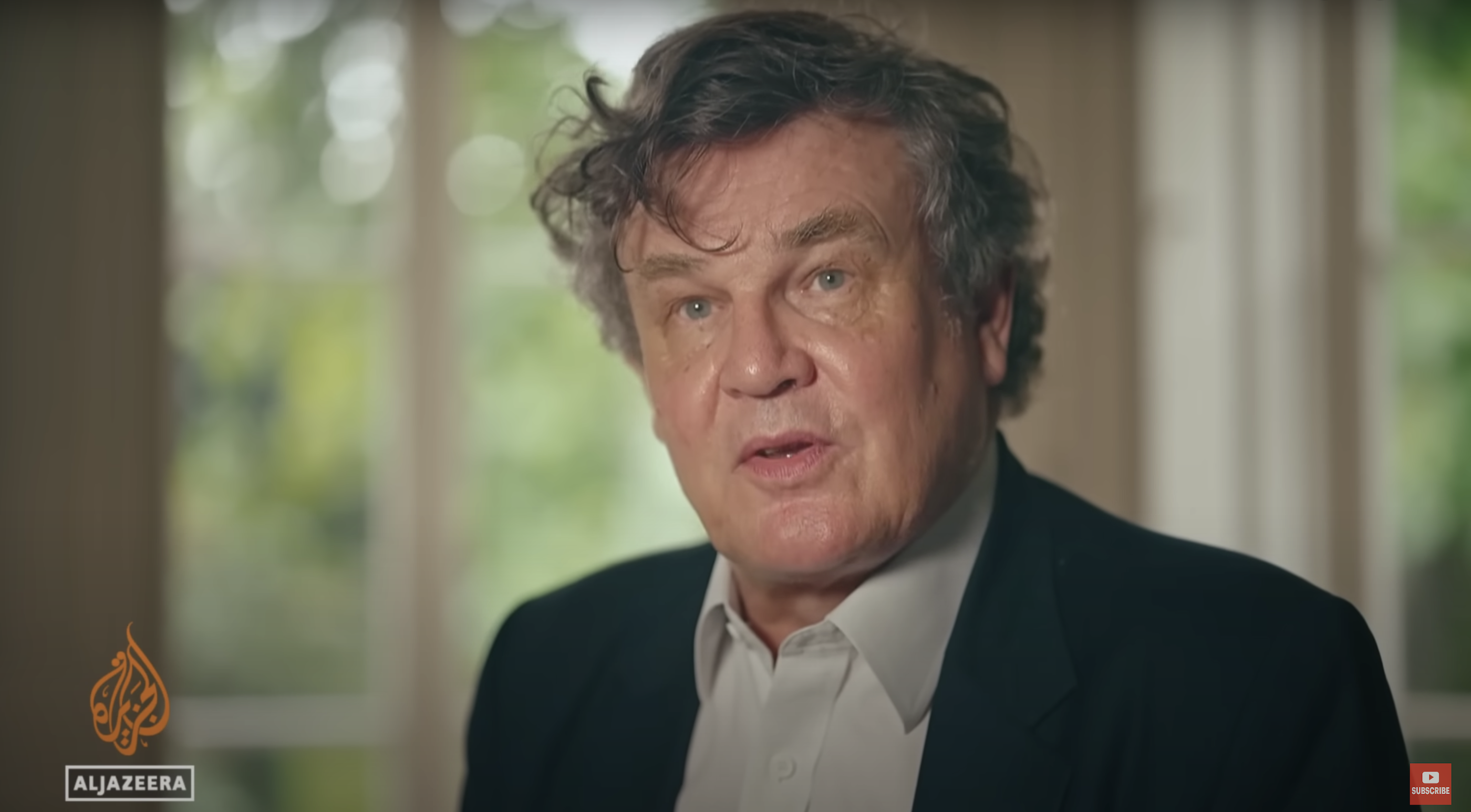 It’s a damning indictment of the Labour Party, based on the biggest leak in British political history.

The documentary shows how unelected apparatchiks at Labour headquarters worked to undermine Jeremy Corbyn and the party members who supported him.

It’s a story of reactionary factionalism and subterfuge and how it affected Labour members.

Peter Oborne talks the viewer through the series. The journalist is a perfect pick for the job given his conservative background.

Oborne’s partisanship is key to selling Corbyn’s story. If the former Telegraph poster boy buys it, there’s no disputing its truth.

Over the course of the series, Peter Oborne recounts the vast scale of sabotage and disinformation against Corbyn and his supporters.

This was no easy task. It’s a testament to Oborne’s integrity.

And, it’s yesterday’s war. Most people will shrug at the claims made, as Keir Starmer’s leadership of the Labour Party is now a fait accompli.

The 24-hour news cycle imposed and reinforced the narrative that Labour was uniquely Antisemitic.

No wonder George Monbiot and Michael Crick tweeted about their “shock” at watching the documentary.

Nevertheless, most of the UK media has been unusually silent about the programme.

The Guardian and The Independent published supportive opinion pieces on the series, while the Jewish Chronicle and Jewish News both ran articles dismissing it.

However, all of these news media, to one degree or another, helped amplify the campaign against the former Labour leader.

Producing a documentary like The Labour Files was tantamount to Al Jazeera calling out its British competition for collaborating on his downfall.

Even without this, Al Jazeera is still an Arab media. It’s used to being an outsider in the UK, in spite of the historically strong Mideast press presence in the country.

Al Jazeera may commission quality journalism and draw its staff heavily from British media. But it will always be branded a pro-Palestinian Persian Gulf broadcaster.

It will never be an RT, but it can’t help but get treated that way, even though most news professionals agree it plays in the same quality court as France 24.

The Al Jazeera Media Network calls The Shard Tower its London home. Not surprisingly, this luxurious skyscraper was built with Qatari investment.

Much like The Shard, Al Jazeera would not exist without the generosity of the House of Al Thani. It’s the story of all state broadcasters everywhere.

Al Jazeera’s independence is not a totality, but its English edition still goes further than any other broadcaster in the region.

Al Jazeera was launched in 1996 with financing from the Qatari royal family.

The Qatari regime had liberalised its censorship laws and abolished its Ministry of Information, and The new emir wanted to counter Saudi hegemony over Arab media.

Al Jazeera was meant to be a soft power project to set the news agenda in the region.

The English language network was set up in 2006 to rival the BBC and CNN in international coverage.

It now reaches more than 270 million people in more than 140 countries worldwide.

Former CNN anchor Riz Khan became the host of his own AJE programme. Afshin Rattansi joined AJE from the BBC before later going to RT.

British journalist Mehdi Hasan joined the English language channel in 2015 as a presenter and moved to Al Jazeera’s US base in Washington DC.

“People say: ‘You work for Qatar!’ Well, indirectly you do. But the Qatari government – I know it sounds strange – don’t actually dictate the editorial agenda or the contents of the shows,” said Hasan in a recent interview.

The problem with Hasan’s view is that the Qatari monarchy doesn’t have to wield editorial control.

Yes, there is formal editorial independence and it’s more real than an illusion, but it’s still the case that the Qatari royals control the purse strings.

Although Al Jazeera is often described as ‘state-owned’, the media organisation is a private foundation for public benefit under Qatari law.

There is nothing to say Al Jazeera will continue as a pseudo-state broadcaster forever.

Former @AJArabic DC bureau chief: al-Jazeera has no editorial independence & since 2014 has been excessively sectarian against Shia https://t.co/mNKgBixK16

The network has strategic value to the Qatari royal family, and so far the House of Al Thani has resisted all pressure to sell it off. But this is no guarantee.

It’s not just financial either. Sheikh Hamad bin Thamer Al Thani is chairman of the company’s board of directors.

This doesn’t invalidate the network’s journalistic standards, but there is no absolute free rein.

The first category is accepted from the get-go, the second category is how debates are staged and the third category is what is unacceptable and marginalised.

Al Jazeera operates the same way, except its spheres are shaped by different interests.

So it’s possible to air a ground-breaking documentary on Labour’s infighting because it doesn’t clash with Qatari foreign policy.

You’ll never see an Al Jazeera programme about US Predator drones based in Doha. But you will encounter attacks on American policy in the region.

Voice to the Voiceless

Al Jazeera English serves up a kind of alternative news.

It’s the channel you watch if you read left media like The Intercept, and complain about The Guardian’s turn right under Kat Viner.

Unlike GB News and RT, Al Jazeera matches the production values and news values of the BBC, Channel 4 and ITV.

That’s why its critics, who often complain, for example, that its coverage of Israel is left-wing or Antisemitic, still watch it.

AJE has tried to cultivate a similar presence to the BBC World Service or the international coverage of any UK broadcast news programme.

But, like the BBC, it has its limits and compromises.

On the one hand, Al Jazeera was content to support Arab Spring revolts in Libya, Tunisia, Egypt and Syria.

But this did not extend to Bahrain, where Qatar was on the side of the status quo.

Despite its ‘anti-American’ reputation, Al Jazeera cheered the NATO bombing of Libya to bring down Colonel Gaddafi.

However, the Arabic network has clashed with the US – sometimes with deadly results.

The United States bombed Al Jazeera’s Kabul office in 2001 during its invasion of Afghanistan and bombed the Baghdad office in 2003.

Two years later, it was reported that George Bush and Tony Blair even considered bombing Al Jazeera’s HQ in Doha.

WikiLeaks later revealed that Al Jazeera had compromised its Iraq coverage as early as 2004 over US backlash.

The broadcaster toned down its coverage and launched its English language network partly to court US favour.

Since its launch, AJE has courted liberal Anglo opinion. Al Jazeera frames its work as giving a “voice to the voiceless” and speaking on behalf of the post-colonial world.

Everything from HIV/AIDS in Africa to indigenous rights in South America, and Italian fascism, is part of its editorial mandate.

That’s why it makes sense to take on the Corbyn story. In many respects, the former Labour leader epitomises the so-called woke politics of AJE’s programming.

Given the current travails of the BBC and its decline, AJE was the right intervention in the international news market, at the appropriate time.

This is how the World Service was heard in the Middle East during the era of decolonisation. Or at least imagined.

Indeed, it’s hard to forget just how good the World Service used to be, through the early years of the War on Terror, when Greg Dyke was in charge of the broadcaster.

As complex as the progressive leanings of the BBC used to be, it did the world a lot of good as a state media. The same goes for Al Jazeera English, today.

Nothing epitomises the hole AJE is filling by producing British investigative stories more than The Labour Files.

It’s as much a reflection of the broadcaster’s inspiration, as it is AJE’s increasing domestication in the UK market.

Al Jazeera English is no less British, in that sense, than the BBC.

Walter Ruttmann’s 1927 film Berlin: Symphony of a Metropolis is strangely suited for these times, when traditional moviegoing is in perilous decline, providing a way to disentangle the art of cinema from that mode of consumption. END_OF_DOCUMENT_TOKEN_TO_BE_REPLACED

That the first song on Soulside’s new LP ends with a sample from a 1952 American civil defence film Duck and Cover, about a nuclear apocalypse, says it all. END_OF_DOCUMENT_TOKEN_TO_BE_REPLACED

Based on the flurry of academic titles about it over the last decade, punk has become as common to college curriculums as it is to the Top 40. Why this took so long is baffling. END_OF_DOCUMENT_TOKEN_TO_BE_REPLACED