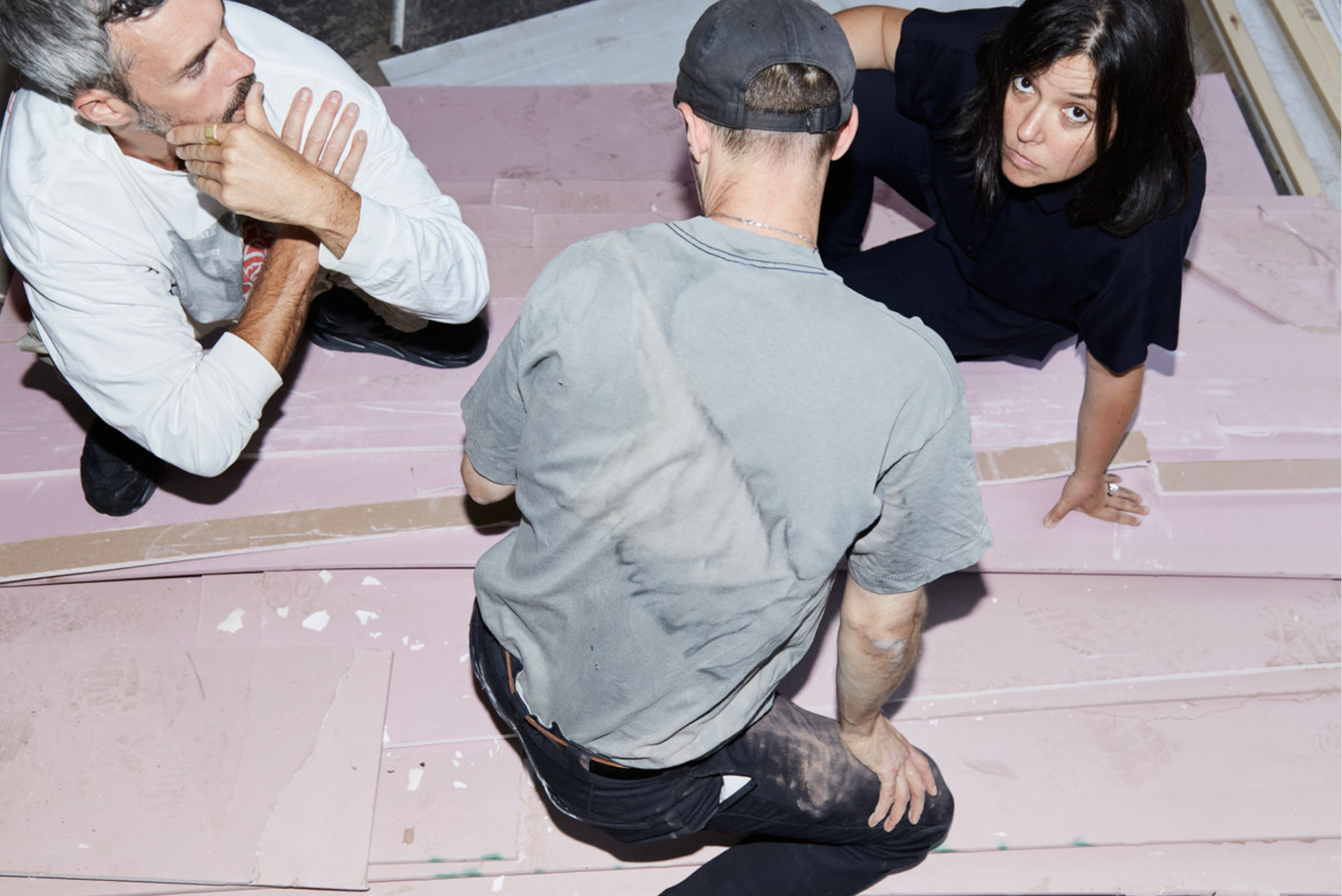 Although they use plenty of pre-recorded sounds, including various spoken-word passages, Moin still relies on guitars and drums to move their songs forward.

“Knuckle”, for example, begins with fuzzed-out riffs that then give way to understated scrawls of noise, sounding like either slowed-down Sonic Youth or sped-up Codeine. Other tracks call to mind 1990s post-rock stalwarts like Slint, Mogwai, and Tortoise.

Despite Magaletti’s world-class talent as a percussionist, none of Paste’s songs cut loose into virtuosity. Moin tightly adheres to a principle of aesthetic restraint, miming those forebears in posing questions it never fully answers.

That’s why, despite the liberal use of distortion and periodic vocal intrusions, this album can still work as a kind of mood music, provided the volume is turned down.

Paste feels like a guided tour of ancient ruins. Sometimes you’ll see an impressive column looming out of the rubble. But you remain squarely in the present, conscious of the historical distance that separates you from past glories.

This sense of remoteness is powerfully reinforced by the fact that Moin’s reference points tended to strive for this effect themselves.

But whereas those 1990s bands were conjuring it as a kind of projection into the future, a time when watered-down alternative rock would no longer be topping the charts, Moin have the advantage of already inhabiting that reality, fully aware that rock has never been less commercially relevant.

At times, the band’s awareness of its own belatedness leads to a wry sensibility, as on the stand-out “Forgetting Is Like Syrup”, which uses hip-hop accents in a way that reminds us that they were once novelties.

As elsewhere on the album, the fact that we hear distinctly American voices, most of which have the air of field recordings, further distances us from whatever sentiments Moin mean to convey. Indeed, it’s hard to imagine a record sounding less British.

That might be a veiled commentary on the political disasters that have followed in the wake of Brexit. Or perhaps it simply reflects Moin’s desire to get as far as possible from the Britpop sound that dominated the UK charts during the 1990s.

It’s also possible that the band is trying to communicate a vision of history that goes beyond the binary opposition between past and present.

After all, 1990s post-rock was itself hearkening back to earlier moments in the push to dissolve the boundaries between different genres of popular music, particularly the one that separated rock and roll from jazz.

It is only when we set temporal limits on an aesthetic that we can appreciate the ways in which it transcends time.

That explains why rock and roll didn’t become truly self-conscious until people believed that it was possible to move beyond it, first in the experimentation promoted by the use of psychedelics and then in the consolidation of those efforts by bands flying the banner of progressive rock – “prog” for short – a maximalist approach to record-making intent on transgressing the implicit boundaries of popular culture.

When the music that would be called punk first began to make its presence felt, its most salient feature was the rejection of these excesses.

Recognizing that prog represented a death knell for the blues-derived rock and roll of the 1950s and 1960s, punk bands sought to reconstruct the genre from scratch, ruthlessly paring away any elements that didn’t feel intrinsic until they were left with something that felt like its essence, even if it was entirely new to the world.

In a way, we’ve been living in a post-rock era ever since, with the more narrowly delimited category of post-punk eventually picking up the mantle of prog and turning it inside out, giving us minimalism in place of its excesses.

Perhaps Moin simply wants us to recognize that laments about the death of rock and roll are themselves nearing retirement age.

Worrying about being trapped in the past seems rather absurd once we recognise that the pasts we are trapped in were themselves given to that same worrying.

More than anything, Paste sounds like the work of a band eager to escape the grinding brutality of the present conjuncture, without permitting itself the self-delusions of simple nostalgia.

It’s a bracing rupture with the empty revivalism that sees decades-old artists once again heading back up the charts.

Walter Ruttmann’s 1927 film Berlin: Symphony of a Metropolis is strangely suited for these times, when traditional moviegoing is in perilous decline, providing a way to disentangle the art of cinema from that mode of consumption. END_OF_DOCUMENT_TOKEN_TO_BE_REPLACED

That the first song on Soulside’s new LP ends with a sample from a 1952 American civil defence film Duck and Cover, about a nuclear apocalypse, says it all. END_OF_DOCUMENT_TOKEN_TO_BE_REPLACED

Based on the flurry of academic titles about it over the last decade, punk has become as common to college curriculums as it is to the Top 40. Why this took so long is baffling. END_OF_DOCUMENT_TOKEN_TO_BE_REPLACED