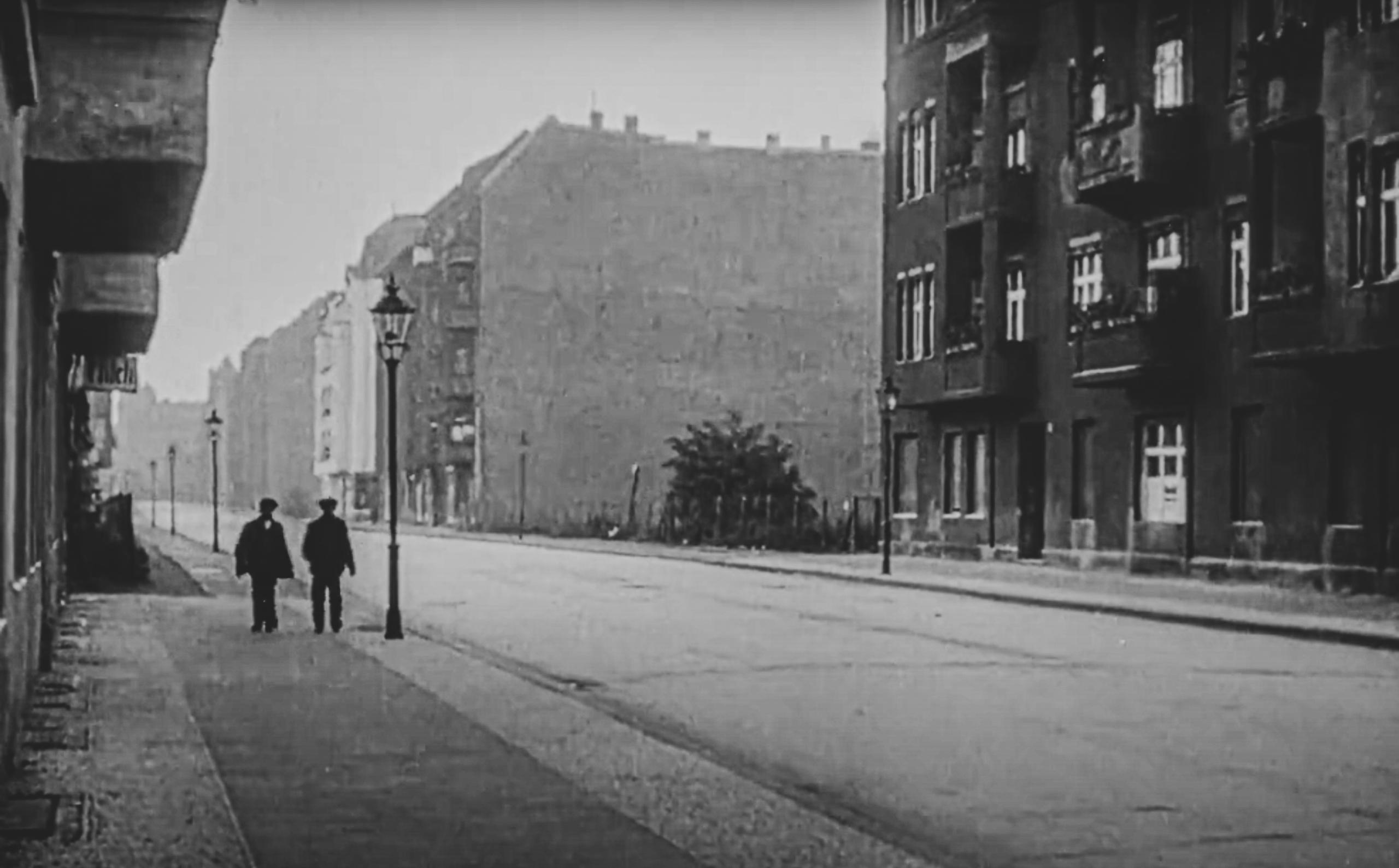 The same could be said for Dziga Vertov’s remarkable Man with a Movie Camera, released two years later. Unlike Vertov, however, Ruttmann was not seeking to demonstrate his commitment to a specific political agenda.

That makes the treatment of modernity in Berlin: Symphony of a Metropolis more ambiguous and, as a result, less difficult to countenance after a century of destructive quantitative reasoning.

Significantly, the majority of Ruttman’s work before this project was self-consciously abstract, translating the ideas of artists like Wassily Kandinsky and Alexander Rodchenko to the screen.

Whereas Vertov’s masterpiece was born from years of theorising about cinema, Berlin: Symphony of a Metropolis derived from the practice of making small films.

Although nearly all the film’s remaining shots have this documentary quality, the memory of this pictorial abstraction haunts them. Even though we are presented with recognisable items from the real world, Ruttman’s compositions highlight their underlying geometry.

In addition, the director periodically supplements the realism made possible by the camera with the image of a spiral, which functions as an implicit commentary on what it captures, reminding us that its apparent objectivity – the word for camera lens in German is Objektiv – is inextricably bound up with a search for meaning that is necessarily subjective.

Berlin: Symphony of a Metropolis is divided into five acts, like a play. But it is difficult to discern a narrative progression within them distinct from the day itself.

The first act begins with shots of the city waking up, and the last ends with shots of it going to sleep. In between, we witness the activities that predominate at different junctures, such as commuters heading to work in the second act. Routines take precedence over the deviation from them that typically sets a story in motion.

Even though the film emphasises the routines of everyday life, it also makes clear how sharply metropolitan life in the 1920s had broken with tradition. Mostly, we see crowds rather than individuals and machines instead of the natural world. The pace of existence reduces impressions to a blur, as intrusion of the spiral underscores.

Ultimately, the division of the picture into acts feels like a desperate attempt to impose structure on a world that has gone out of control.

Storytelling typically requires that we identify characters and, in most cases, identify with one or more of them as the plot unfolds. Confronted with the massified anonymity of existence in a city like Berlin, we fall back on the most primal means of charting progress, the passage of the sun across the sky.

For the most part, Ruttmann avoids passing judgment on this state of affairs. But there are periodic hints that he regards this new mode of existence with scepticism.

Shots of typists and switchboard operators are juxtaposed to ones of a screaming monkey and dogs fighting on the street. A woman holds out a can as she begs for money. A man leans dejectedly against a building. A working-class speaker exhorts a crowd.

One sequence stands out in this regard. After a series of shots that chart the printing and distribution of newspapers, we see certain words come leaping out from the pages: “Crisis”, “murder”, and then, several times over, “money”.

Then we see a shot taken from within a roller coaster during its descent, then a frantic-eyed person leaning over a bridge, then the roller coaster again, and finally bystanders who look down into the river where this person has apparently leapt without any of them attempting a rescue.

Even if Berlin: Symphony of a Metropolis fails to sustain a discernible narrative apart from the tale a typical day in the city, it communicates a message. The pace of existence in the modern metropolis outstrips the capacity of human beings to cope with change.

In other words, the film’s story is that its inhabitants can no longer rely on conventional storytelling to make sense of their lives.

A different means of apprehending reality is required. And that is what Ruttmann provides them. Because it isn’t just the content of his shots that communicates the pace of existence but their duration. For a film nearly a hundred years old, Berlin: Symphony of a Metropolis has an extraordinary number of cuts.

So does Man with a Movie Camera, famously. Vertov wrote eloquently of the need to dispense with theatrical continuity, which drags us back into the past.

Although Walter Ruttmann was not a theoretician, his approach to form demonstrates his fundamental agreement with this argument. We can’t cope with speed by artificially slowing things down or subordinating the vast number of things we passively witness each day to a narrative structure that makes them disappear from consciousness.

From this perspective, abstraction is a survival mechanism, a way to register aspects of everyday life that would otherwise escape notice. Because once it becomes possible to discern a pattern, whether in the form of static shapes or dynamic flows, a whole wealth of possibilities opens up.

As it happens, I decided to rewatch Berlin: Symphony of a Metropolis on my laptop inside Casa Video, in my hometown of Tucson, Arizona, one of the rare stores that still rents DVDs and videotapes.

The reason why this local institution has survived the mass extinction of that type of business is that its owners smartly decided to transform it into a “film bar”, a place where people can drink beer and wine and play games while films play on flat-screen televisions.

On a typical visit to this place, a third of the customers are paying little attention to the films, another third are only watching them intermittently, and the remainder is sitting where they can both see and hear them over the din of conversation.

But even the people who aren’t paying attention seem to like spending time in the vicinity of cinema.

What soon became apparent to me is that Berlin: Symphony of a Metropolis is better adapted to this kind of environment than the vast majority of movies.

The lack of a story that needs to be followed closely, the absence of dialogue, and the rapid cutting between short-duration shots make it perfect for distracted viewing.

And that mode of distracted viewing is much closer to the average experience of motion pictures in 2022 than sitting in a darkened theatre where everyone is supposed to be focused on the screen.

My friends who teach film report that many of their students are increasingly resistant to any film that feels dated to them. That doesn’t just include screwball comedies from the 1930s or film noirs from the late 1940s, but even the first instalments in what would become the Marvel Cinematic Universe.

If students complain that the movies their parents grew up with move too slowly, if they can’t bear to watch any shot from a stationary camera that lasts longer than thirty seconds, it seems foolhardy to expect that they could express interest in a plotless film from the silent era.

But Berlin: Symphony of a Metropolis, like Man with a Movie Camera, largely avoids the approach to filmmaking that these students find intolerable.

Nothing is on screen for very long. And the cumbersome architecture of storytelling with which young people typically take issue is absent.

Watching these films feels more like watching somebody’s YouTube channel or TikTok than the classic moviegoing experience. You can tune in and tune out almost at will yet still take away something positive from the experience.

In short, the ways in which these films experimented with form make them relevant and even – to use the parlance favoured by young people – relatable today, even as cinematic classics like The Godfather struggle to secure new audiences.

I don’t mean to suggest that we’re better off in a world where people are too impatient to sit through a feature-length film unless something explodes every few minutes.

At a time when the pace of existence feels every bit as out of control as it did to the inhabitants of Berlin, Tokyo, or New York in the 1920s, cultivating an appreciation for “slow culture” can have an extremely positive cognitive impact.

In a sense, it’s another way to meditate. And the regular practice of meditation has been proven to benefit both mind and body.

At the same time, however, trying to shame young people – and not-so-young people – for not having the attention span to sit through a film without looking at their phones or letting themselves be otherwise distracted is a losing proposition.

What this hand-wringing about our apparent descent into the world of “post-literacy” fails to acknowledge, however, is that these same students are reading for pleasure all the time on their phones. It’s just that they don’t report that activity as reading because they believe it doesn’t count.

Something similar is at work with motion pictures. Those same students who complain about having to watch a film from start to finish, whose attention spans have supposedly atrophied to the point where they cannot follow a story, are likely to be tracking hundreds, if not thousands, of “stories” on social media every single day.

Indeed, they might be ignoring their assigned viewing to keep pace with that constantly fluctuating patchwork of nano-narratives.

Maybe it’s time to stop fighting these trends and help students to recognise that they are already performing this complex form of labour.

If students can learn to reconstruct their viewing practices more self-reflexively and take pride in what they already know how to do well, I’m willing to bet that they will be more open to other ways of consuming motion pictures.

Showing them films like Berlin: Symphony of a Metropolis would be a great place to start.

Because even though much of the content would seem very dated indeed, the form in which it is relayed would surely resonate with their own experiences of trying to keep pace with a world that feels out of control.

And once they can establish kinship with their great-grandparents’ generation, it will surely be easier for them to perceive themselves historically.

Screenshot courtesy of the Criterion Collection. All rights reserved.

The 1970s was a decade of broken dreams. The end of the postwar boom brought to a close the era of middle-class liberalism in Europe and North America. END_OF_DOCUMENT_TOKEN_TO_BE_REPLACED

Serbian director Dušan Makavejev’s 1968 film Innocence Unprotected manages both to explore the legacy of wartime trauma seriously and to make fun of itself in the process.  END_OF_DOCUMENT_TOKEN_TO_BE_REPLACED