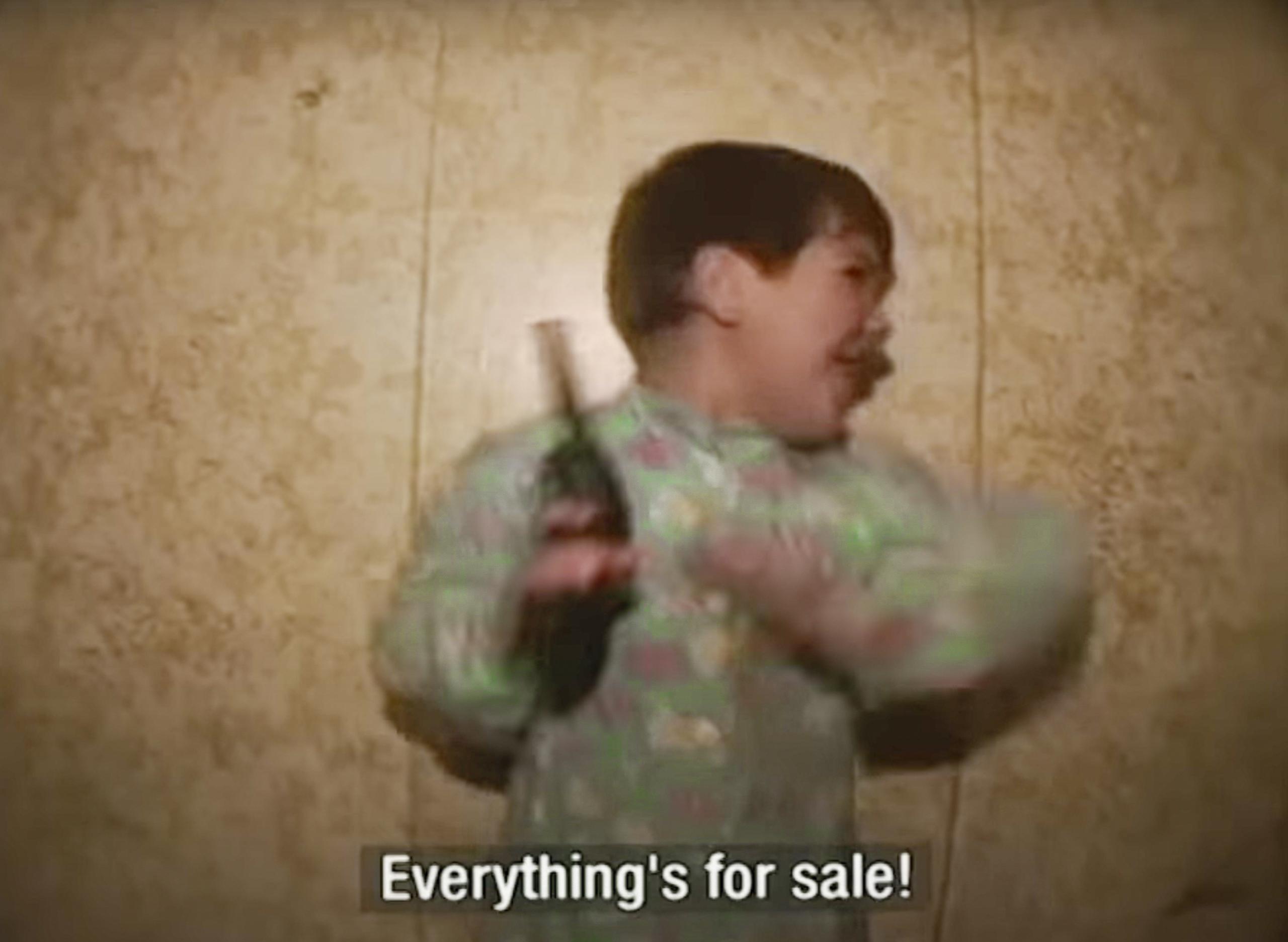 The British filmmaker is more artist than journalist at this point, though Curtis hates the idea that his work is no longer strictly reportage.

His new BBC iPlayer series, Russia 1985–1999: TraumaZone, is the kind of documentary that haunts your dreams.

As the title suggests, Russia 1985-1999 conveys the impact of shock therapy on the post-Soviet space, particularly the devastation it wrought upon the Russian people.

If the series is a tour of experiences, with his impeccable English, Curtis is our tour guide. Except he doesn’t narrate the experiences. There are no authoritative voiceovers.

It couldn’t have been timed better. The Russia-Ukraine war still rages on, while Putin maintains his stranglehold on power and Mikhail Gorbachev has just died.

Fortunately, this series is not another piece of Putinology, either.

The documentary could be read as a pre-story of Putin’s rise, but this would be to overlook how broad the film is. It takes us across Russia and the post-USSR.

We have to get away from the notion that the problems of Russia are personified by one man. This is why history is so important and this is why Russia 1985-1999 is especially worth watching.

Early 1990s Russia may seem like a dream world to many BBC viewers, but it isn’t so far away. It’s still not widely appreciated in Western Europe just how devastating the decade was for most Russians. More than 70 million people fell into poverty.

Although the West had made communism its enemy for decades, Russia was treated worse following the demise of the Soviet Union than the Rome-Berlin axis after the Second World War. And the results are still with us today.

No Voice of God

Long before the 2022 invasion of Ukraine, Russia was seen as an aggressive, authoritarian state and with good reason. However, this picture missed out on much history – especially the stories of people who live there.

Russia 1985-1999 is supposed to convey the emotional experience of the collapse of communism and the subsequent breakdown of democracy.

Scenes such as people felling trees for firewood in parks and children begging motorists in traffic drive home the despair Russians felt.

Russia 1985-1999 takes us through Mikhail Gorbachev’s failed efforts at democratisation to the emergence of a brutal capitalist economy.

Gorbachev looms large at the beginning of the series, but an increasingly drunken Boris Yeltsin is the figure of continuity from the late 1980s USSR to the late 1990s Russian Federation. Vladimir Putin only appears at the very end of the series.

Thankfully Curtis was wise to avoid a crude Kremlinology. The politics of the late Soviet Union are followed to provide context, but the plight of ordinary people comes first (and rightly so).

Russians seem to hold few illusions about the country going capitalist. Concerns about corruption go back to the late 1980s when the documentary shows footage of protests against Gorbachev’s economic reforms and the rise of a “mafia state”.

Of course, mafia is a metaphor just like oligarchs is a stand-in for billionaire. It wasn’t organised crime that was driving Mikail Gorbachev’s agenda.

He thought he was saving the system, while corrupt bureaucrats and other opportunists seized the moment to make a killing (sometimes literally).

We see nouveau riche like Boris Berezovsky and Mikhail Khodorkovsky beginning their rise in the late 1980s. Khodorkovsky even penned a manifesto arguing that money is the only system left to support.

This was long before the Yukos CEO fell out of favour with Putin and found himself in a prison cell. It was also long before Berezovsky began to portray himself as a great liberal democrat.

These elites – archetypal oligarchs – looted an empire, not just a nation. Though Adam Curtis is eager to stress how opportunists like Berezovsky were just exploiting the illogic of the Soviet economy as it veered towards total collapse.

Some of the darkest scenes that follow include nightmarish interviews with homeless people living in tunnels beneath Russian cities.

Such images are contrasted with the opulence of Moscow’s decadent new aristocrats and carefree young people clubbing in abandoned museums.

Meanwhile, the country’s wealth is offshored and the state goes bankrupt.

Protesters regularly clash with the cops in the streets, while scuffles break out in supermarkets. Gangsters fight for control of factories. Desperate couples film their own sex tapes for cash.

Statistics can only convey so much. Carefully chosen scenes, Curtis’ stock-in-trade, far more.

As a filmmaker, Adam Curtis is moving away from traditional journalism and employing a subtitle-heavy and immersive, collage style.

He first began this break with Bitter Lake, HyperNormalisation and Can’t Get You Out Of My Head.

The BBC used to air Curtis’s programmes during standard broadcast hours when one might tune in to an in-depth news program or featured documentary.

Now his work is relegated to iPlayer. Yes, he has much more free rein as a result and is allowed to experiment like this. But this is a significant change.

For thirty years, Adam Curtis has captivated BBC audiences with his innovative storytelling.

His body of work encompasses everything from the War on Terror to the selfish gene. The filmmaker has connected the dots with a moving collage of archival footage.

One overshared Curtis spoof describes his work as the result of a “drunken, late-night Wikipedia binge”.

The links between various subjects often seem extremely tenuous. It’s not obvious how the selfish gene theory is relevant to the Congo’s mineral wars.

By contrast, Russia 1985-1999 doesn’t have to account for the connections because all of its contents are drawn from the same society, during a specific period of time.

It could be that Curtis is regarded as too intellectual and too subversive for everyday TV consumption.

Likewise, writer-cum-filmmaker Jonathan Meades is no longer given the same air-time by the BBC that he once was, and has been relegated to the margins.

Just like Meades, Adam Curtis does not spoon-feed his audience. He confronts the viewer with startling, sometimes shocking images and challenges their beliefs about the world. But this is not necessarily what the suits want on BBC2.

This fits with a general dumbing down of British television culture in recent decades. Yet, the BBC still gives Curtis the resources to make series like Russia 1985-1999.

Judging from the amount of media coverage the show has received, it makes sense. Few television producers possess Adam Curtis’ gravitas, and the BBC, no matter how vapid and irrelevant it’s become, would lose the last bit of respect it gets by bagging him.

The future of the BBC looks bleak as the Corporation faces funding cuts and more political pressure than ever before. It’s impossible to see how another Curtis could start at the broadcaster today, and have the same kind of career.

Russia 1985-1999 is a reminder of what once made the BBC such a great place for political television, and, ideally, under a better government, what it still could do. That it would take an avant-garde documentary about Russia says it all.

Screenshot courtesy of the BBC. All rights reserved.

The 1970s was a decade of broken dreams. The end of the postwar boom brought to a close the era of middle-class liberalism in Europe and North America. END_OF_DOCUMENT_TOKEN_TO_BE_REPLACED

Serbian director Dušan Makavejev’s 1968 film Innocence Unprotected manages both to explore the legacy of wartime trauma seriously and to make fun of itself in the process.  END_OF_DOCUMENT_TOKEN_TO_BE_REPLACED